Before today we had never been to Al-Khayimiyya, the tent-maker’s market, in the Khan. I don’t know why. We’ve been so close, just a short walk from Bab Zwayla (where we’ve been several times), but never bothered to stop by. 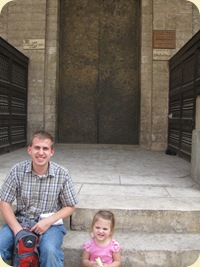 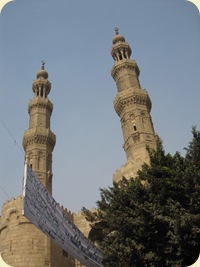 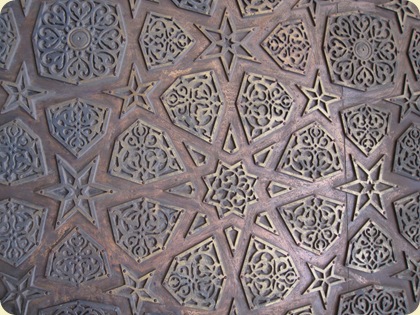 On the way we stopped in the shadow of Bab Zwayla to have some snacks on the steps of the mosque of al-Saleh Talai, which was apparently closed. We enjoyed watching the chaos on the street unfold in a dizzying, unending trail of cars, scooters, and horse-drawn carriages, each winding their way around potholes, pedestrians, fruit stands, and other obstacles. 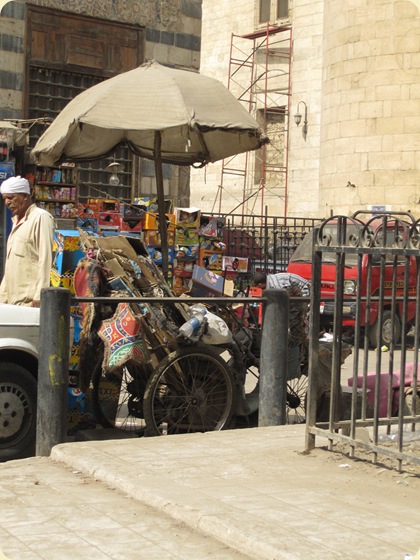 Al-Khayimiyya is the only covered market that still exists in Cairo, the cutouts in the roof spotlighting various tents and appliquéd pillows with beams of sunlight. 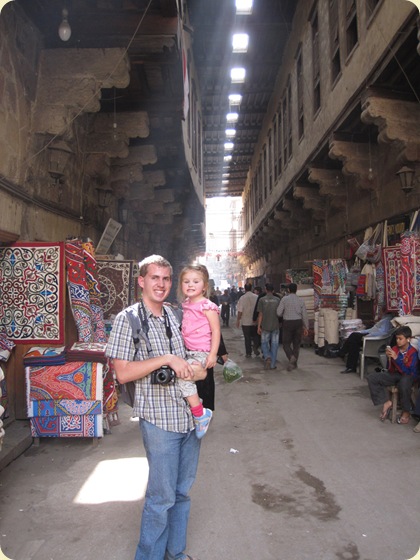 We ended up buying a cute doll-sized tent, hardly bothering to barter at all. The prices seemed quite reasonable. We were sorely tempted to get a play tent for the girls (his starting price was 150 LE) but there was no way we’d be able to get it home unless we ripped the seams on the bottom and took the sticks out. 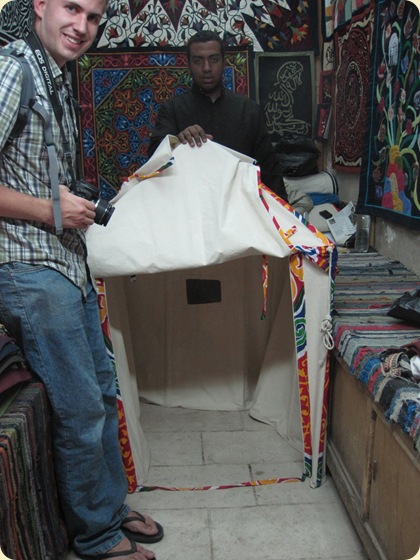 It would have been fun, but perhaps we’ll find a way to duplicate it once we get home. We have some of the colourful Ramadan fabric already so I’d only have to find some canvas and poles, blow up the pattern from our mini-tent, and learn how to sew. Easy, right? 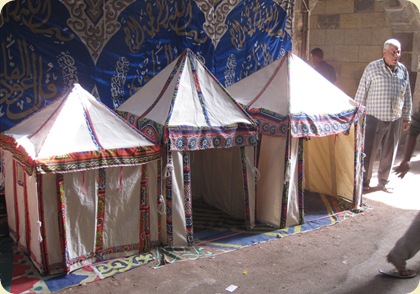 As narrow as this street was there were overloaded cars and trucks passing through constantly. That’s typical for these parts. When they come through you just step into a store for a minute before resuming your walk down the street. 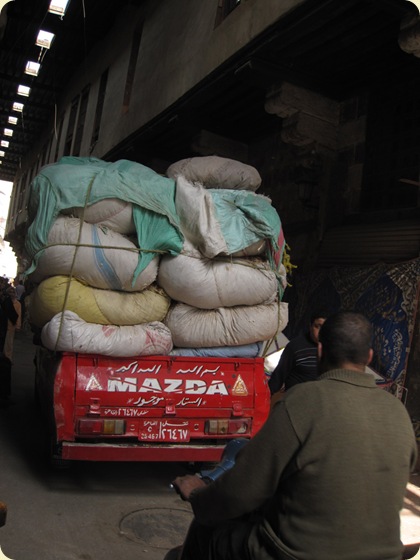 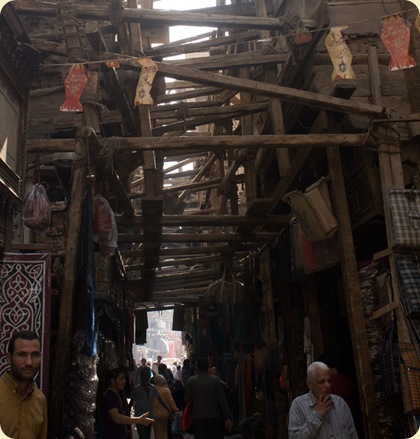 Some locals took precautionary measures to protect their heads in the event the makeshift roof should spontaneously collapse. After assessing the instability of the roof, I had to appreciate the ingenuity of this woman: 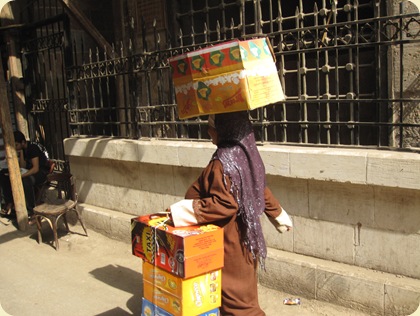 Of course, walking around with things balanced on their heads is second nature for the women here. I would drop a whole lot of things if anyone expected me to walk around a bustling street balancing a box of goods on my head. I’ve only ever seen one parcel fall off a woman’s head—it was a plastic bag full of clothes and it just slid off and exploded on the ground behind her. People scrambled to help her get it bundled back together, some kind soul donating a used plastic bag, and she was on her way again in minutes like nothing had ever happened. 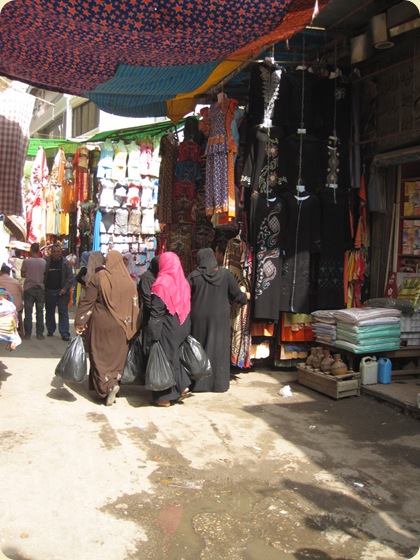 While walking down al-Muizz toward the Khan, we saw bulging bags of fine Egyptian cotton… 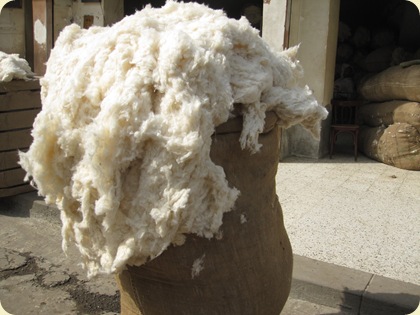 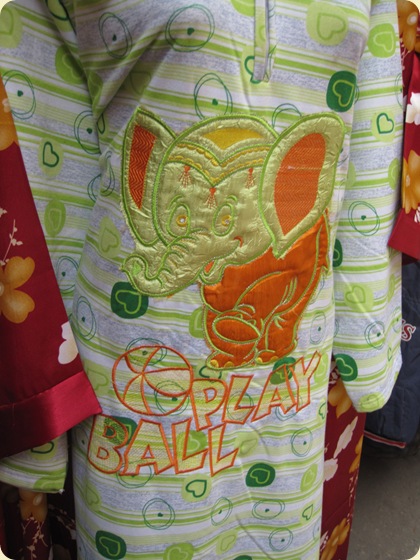 …and, because this coming Friday is Mawlid al-Nabi, the celebration of the prophet Mohammed’s birth, there are frilly ‘arusaat al-Mawlid (Mawlid dolls) for sale everywhere you turned. As a tradition that began under the Fatimids, these dolls—or horses or mosques or cannons, but usually dolls—were made of sugar, earning the nickname “sugar doll,” and were given to women and children on mawalid.*

The ones that we saw weren’t made of sugar and were all decorated rather creepily—with hearts made of pipe cleaners stuck to their dresses and things like that. 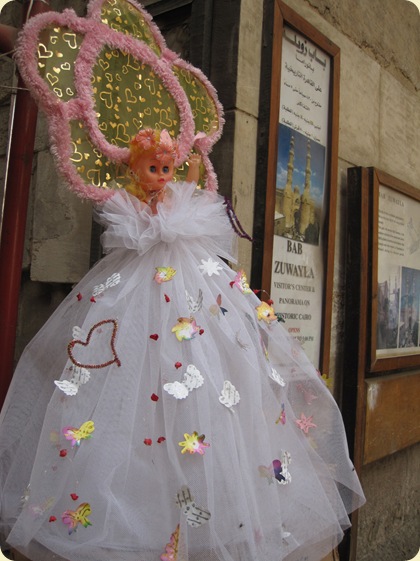 We also saw a tarboosh (fez) shop where they were making real felt tarabish (fezzes). They use fire to get the mold really hot and then squish the felt into shape by tightening the press. 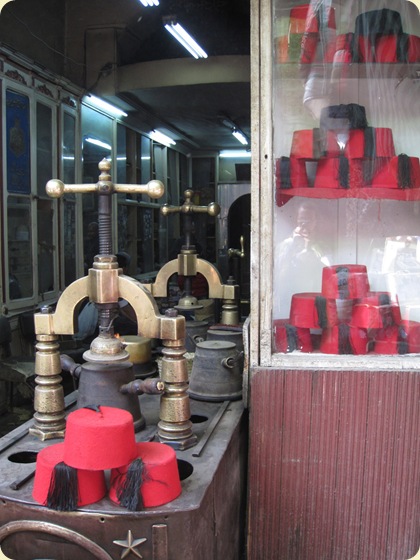 Since we had come so far, we decided to head over to the Mosque of Sayyidna al-Hussein Mosque just to see if we could get inside. Lonely Planet says that the mosque is closed to non-Muslims, due to the holiness of the site, as did Dr. Belnap when we visited Cairo in 2006 during Andrew’s study abroad to Jordan. We’ve never tried to go in since we had assumed that it was simply closed to tourists. However, Andrew heard via the Twittersphere that this wasn’t the case and decided we should check it out.

So we made our way down Muski (or Gawhar al-Qaid) to Midan Hussein, stopping to take a few pictures of Miriam to prove that she came with us. 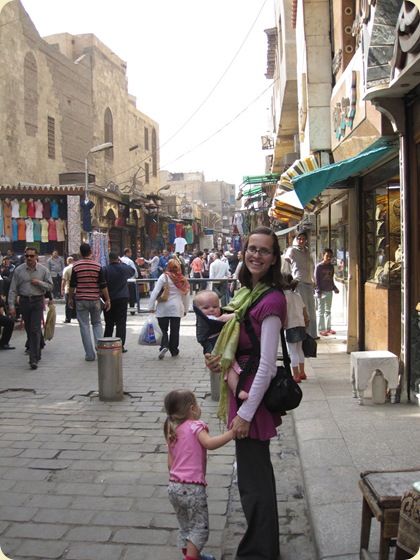 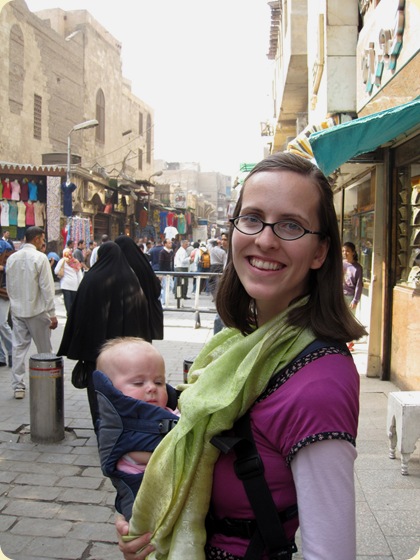 This mosque has always cracked me up a bit. It was built in 1154, with most of the current structure dating back to 1870, but there are these rocket-ship things standing out front, which, according to Lonely Planet, are “Teflon canopies that expand to cover worshipers during Friday prayer times.” Perhaps they are necessary since al-Hussein Mosque is a popular mosque to worship at and overflow areas are needed…but they just look ridiculous to me. 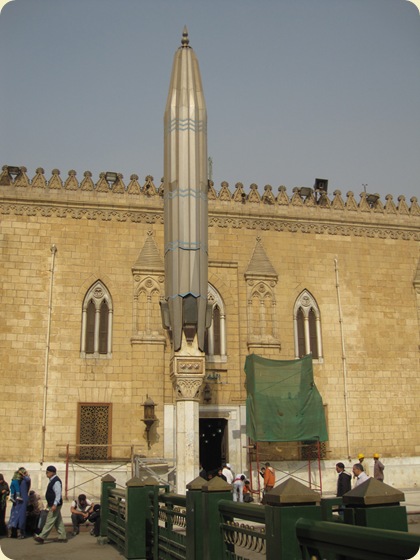 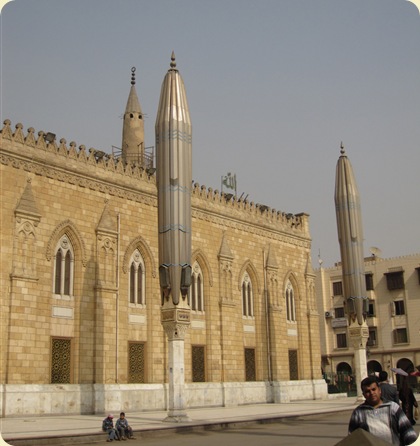 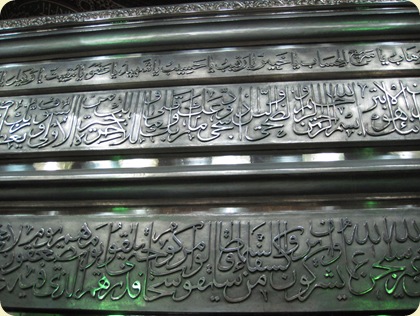 Inside the mosque is a mausoleum supposedly holding the head of Hussain ibn Ali, the grandson of the prophet Muhammed. The Umayyad mosque in Damascus also purports to house this relic, while some claim that his whole body, including his head, have been interned in a shrine in the Imam Husayn Mosque in Karbala, Iraq (the place of his death). Also, the mosque holds the oldest-known complete manuscript of the Quran. 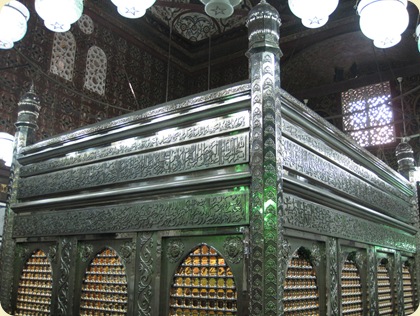 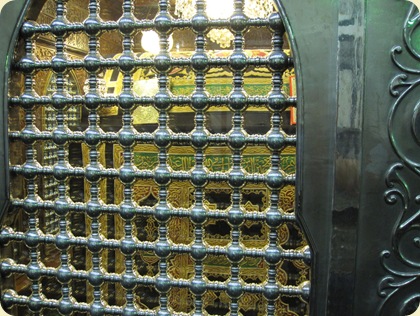 I can understand why tourists wouldn’t be allowed into the mosque, with the way that tourist groups flock around, chattering obnoxiously in a huge pack. Mosques are first a place of worship and oughtn’t be overrun the irreverence large tour groups would invite. Since most mosques are open to tourists, I think it is nice that there are a few reserved specifically for worship. 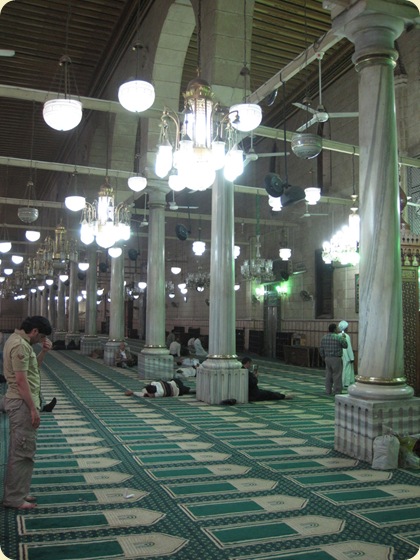 Still, we are not your average “tourists;” in fact, I wouldn’t really classify us as tourists at all. We live here, first of all; secondly, we are only two people, not fifty; and thirdly, we care about the culture, history, and religion of the region and genuinely wanted to visit the mosque for those reasons. While it doesn’t strike any spiritual chord within me, personally, I respect that it does for some. 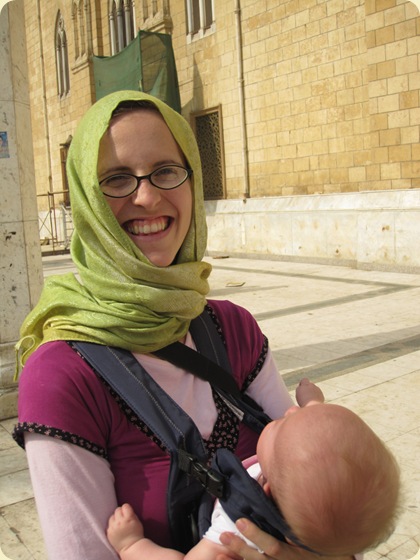 I went inside the women’s section with Miriam while Andrew stayed outside with Rachel. It was interesting to me that the women were so free with themselves inside the mosque, separated from the men, even though the shoe-takers—in the same room the women were worshipping in—were men. There were women in various stages of prayer sprawled all over the place. I saw a woman with her shirt splayed open, breastfeeding her baby, within eyeshot of the aforementioned male shoe-takers. That was shockingly interesting to me but, later, while I was sitting on a bench in Midan Hussein, facing the mosque, huddled under my nursing cover to breastfeed Miriam, a lady sitting just up the walk from us lifted up her khimar, pulled down her dress, and popped her baby to nurse right in public. I was floored.

She didn’t even lower her khimar after she had the baby latched on, either, which was even more shocking to me.

While Miriam was nursing some girls came over to fawn over Rachel, who forcefully shied away from their advances.

“She’s afraid,” I told them in Arabic, stating the obvious.

They noticed Miriam’s feet poking out from under the nursing cover.

“Can we see your little baby?” they begged.

I looked at Andrew, at a loss of how to answer. Clearly it wouldn’t have bothered them to see Miriam nursing, if my co-nurser on the sidewalk was any indication of how acceptable public breastfeeding is in Egyptian society, but somehow it still bothered me to show them Miriam while nursing.

The girls hung around for a minute longer, trying to coax Rachel to play with them. Lucky for her Miriam stopped eating, so I brought her out for them to see, which made them very happy.

Having finished feeding Miriam, we announced our intentions of heading home to Rachel…who flipped out and started screaming about not wanting to go home but doing “sompthin’ diffrent n‘tead!”

Oh, how I love having a two-year-old.