Miriam is four months old today (where has all the time gone, right?) which is crazy. She’s recently begun trying to grow up altogether too quickly for my taste.

Right now she’s working on sitting up by herself (in addition to wriggle-crawling). We’re pretty sure she can do it, although there isn’t any way to know for certain because anytime we try to let her sit up on her own she is joined seconds later by Rachel. 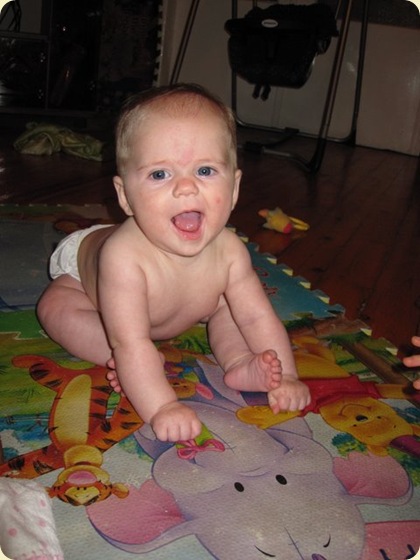 Chances are Miriam won’t ever learn to do anything for herself since Rachel will do just about anything for her. Rachel enjoys not only helping her sit up, but also demonstrating proper crawling position and how to chew on teething rings. Luckily we aren’t really teething yet—I hope we hold off on that for a while because Miriam’s favorite method of telling me she’s finished nursing is to chomp down and I’m really hoping we break that unruly habit before teeth start coming in. 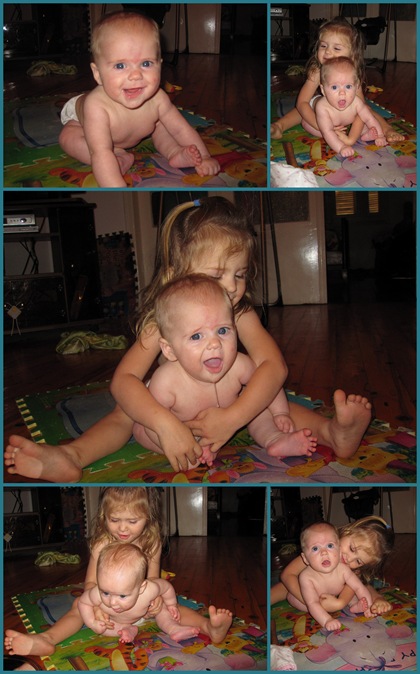 Just after these pictures were taken I told Rachel to go pick out some clothes for the day. Usually when I ask her to do this she will just bring me pants since her shirts are too high for her to reach. This particular day, however, she got all ambitious and went for the shirts as well.

“Help! I’m stuck in my closet and I can’t get down!” she yelled. 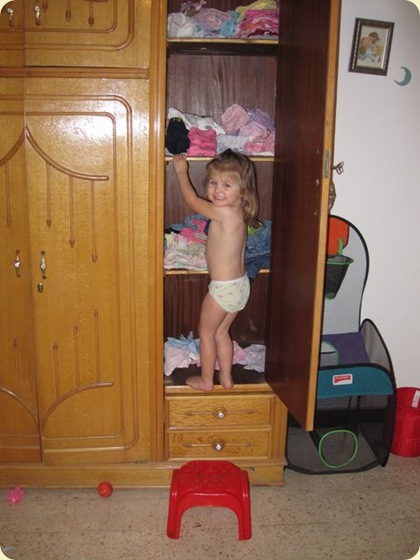 She was a little too nervous to step backwards onto the stool, although she tried to climb even higher…which doesn’t make sense. I guess she thought that since she couldn’t come down she should at least try to go up.

Anyway, back to Miriam.

Miriam has been an absolutely delightful baby. So much so that I’m jealous of all my friends having babies right now—it’s like I’m almost baby hungry again, which is totally weird for me.

After Rachel was born I was so stressed/tired for so long and when my friends who had children around the same time I had Rachel would mention wanting another one I would a) ask them if they were crazy b) start laughing uncontrollably or c) go home and cry.

It took me a long time to be comfortable with the idea of having another baby and was something that I prayed about long and hard. I never thought that I, who had always wanted more than one child, would ever have to pray for the desire to have more. We felt like we needed to add to our family but Rachel was such a hard baby that I wasn’t sure I could handle more than one and the idea of having two babies like Rachel right in a row was enough to drive me to the brink of insanity.

Miriam isn’t like that at all. She sleeps better than I imagined a baby could ever sleep, she handles all the unnecessary attention Rachel doles out to her well and rarely cries about anything (even when Rachel’s sitting on her and using her head as a bongo), she’s smiley and sweet and I just love her.

It’s like when my friend Bonnie was explaining to me how she was not crazy for wanting another baby when Rachel and Amy were about 8 months old.

“Well,” she said after I accused her of nuttiness, “You have Rachel and I have Amy, so…”

She didn’t have to go on. I looked at Amy, sitting peacefully on Bonnie’s lap, and then glanced over at Rachel who was using another child twice her size as a human walker. Everything made sense.

Rachel was up and running long before her peers. I didn’t even know that babies could take two naps in a day, let alone one. And don’t even talk to me about sleeping through the night because Rachel’s still not there. Miriam, on the other hand, will wake up once, if ever.

I don’t know if it’s because I’m more of a relaxed mother this time around or if Miriam really is an easier baby or if it’s a combination of those factors. Either way I feel a lot less…out of control…than I did when Rachel was this age.