We tried to catch a taxi to take us to Midan Hussein from Midan Opera. No one would agree to take us there, so we walked. It isn’t far. 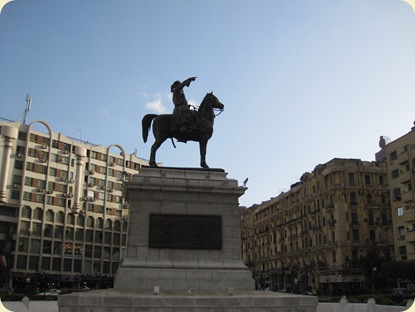 We weren’t sure what to expect, really, but were excited to see whatever was going on. Today is, as I’ve mentioned, Mawlid al-Nabi, the birth of the Prophet Mohammed. Also, it happens to be my brother David’s birthday (Happy Birthday!) but that’s just a happy coincidence since Mawlid al-Nabi is celebrated on the 17th day of the month Rabi' al-awwal. Last year Mawlid al-Nabi was in March.

Walking downtown is always an interesting experience. It’s just so different from quiet, suburban Maadi, especially today. We’ve made the walk before and it was crazy, but today was simply absurd. It was so packed full of people carting huge packages—ladies balancing boxes of dishes on their heads, men carrying huge sugar dolls, traffic backed up as far as the eye could see. 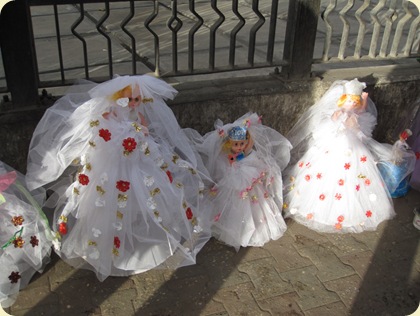 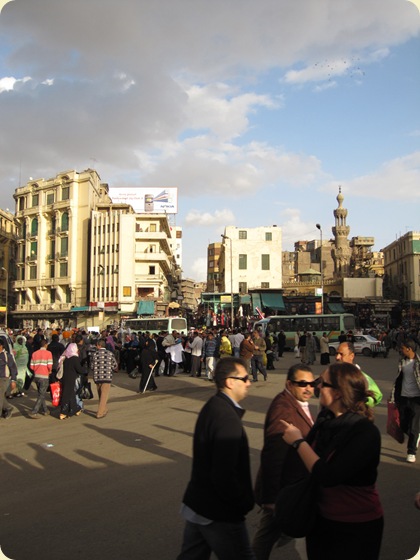 Despite the crowds, walking this part of town is always a thrill. 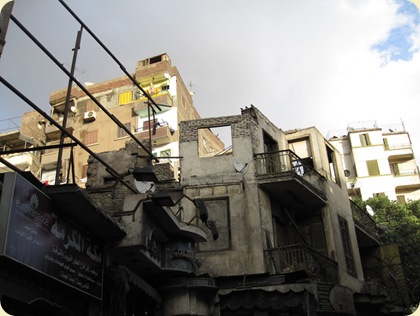 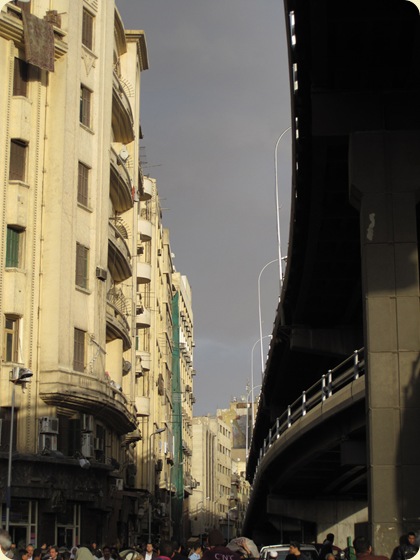 The sky looks like it has more in store for Cairo. Apparently yesterday’s storm killed four—through accidents caused by the storm, not the storm itself—and injured fifty others! My friend was on the metro when the storm struck and they simply shut the metro down—she had to get out and walk. The roads are covered in lakes of water since there is no storm drain system in place. Crazy times. 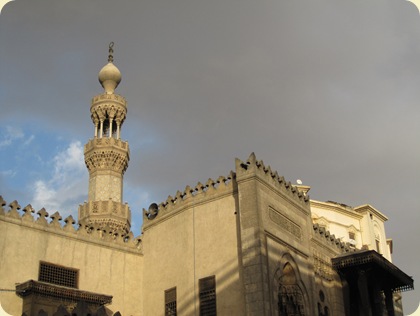 We saw some interesting things… 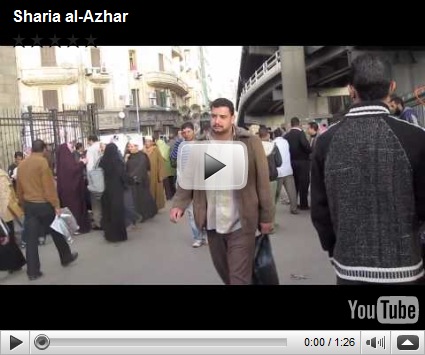 …that made us antsy to see what we would find at Midan Hussein. Soon we made it to the Khan, winding our way through the spice market to get to Muski. The air was so thick and pungent with spices that Rachel was coughing. 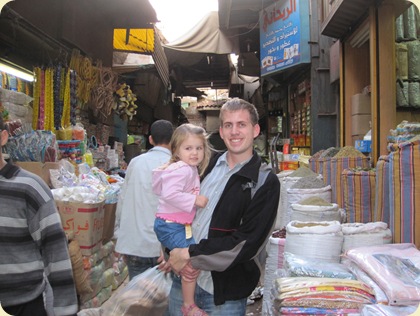 To tell the truth, we weren’t really sure where we were when we chose to walk through the spice market but figured it would connect to the Khan somewhere. We only figured out where we were when we entered a main street from the tiny alley of spices and found ourselves standing in front of a familiar-looking mosque, just paces away from where we found Midaq Alley. 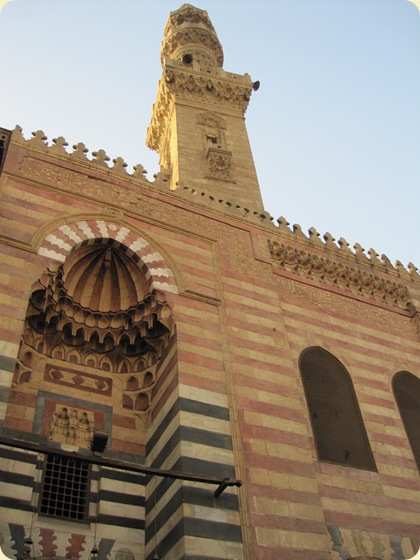 Hussein mosque was all dressed of for the mawlid. There was a sort of a parade going on and it seemed to be filing into the mosque at the end. Andrew listened in on what an Egyptian tour guide was telling his Italian tourists. Basically, on this day, the main leaders for each Sufi group in Egypt go into the mosque and vote on who will be their next national leader. 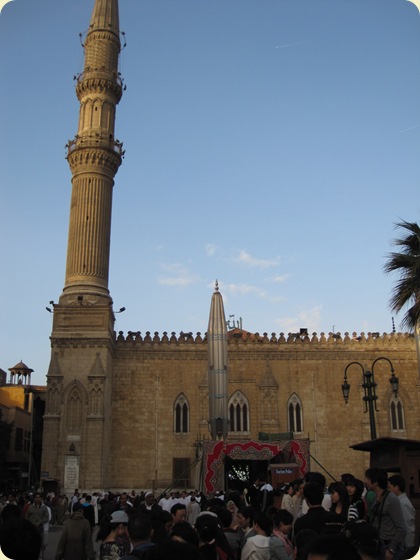 We headed to the end of Midan Hussein to watch the parade. Sure enough, there were different groups of Sufis carrying banners announcing their region. 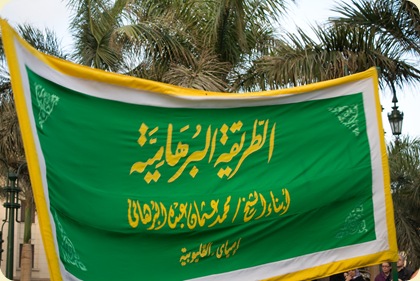 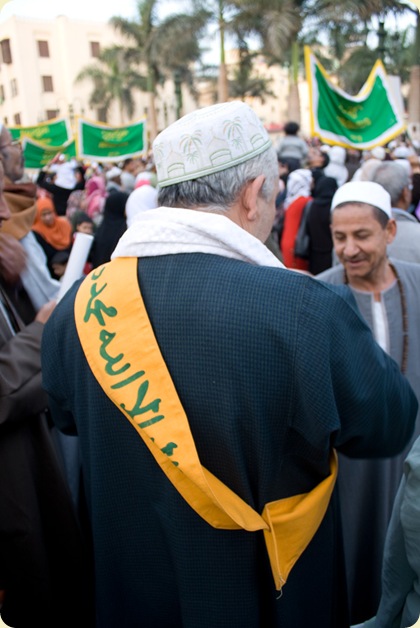 The marchers and the crowd were all singing, clapping their hands, and ululating. The spectators were so involved in the parade that it was hard to tell who was in the parade and who wasn’t. It was more of a free-for-all parade with pockets of people thronging in and out of the procession. This movie probably has some dull parts, but the end (3:22) gets pretty exciting. 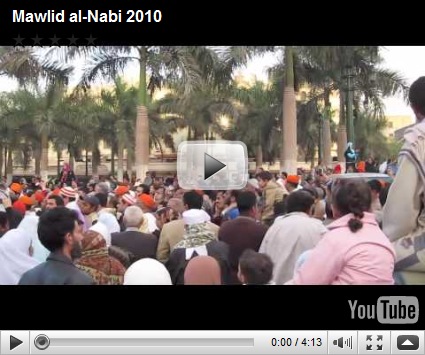 Unfortunately Andrew didn’t put in the part with Rachel bouncing on his shoulders and using his head as a drum. She was getting really into it. Oh, well. 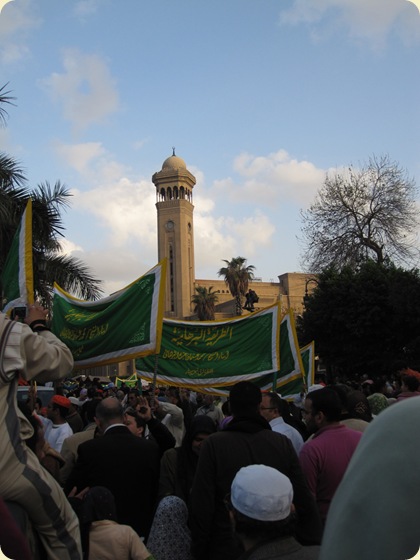 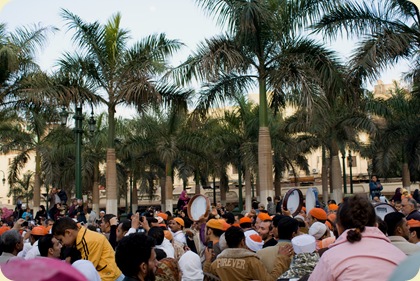 At first the parade seemed rather boring, but before long a group came by with speakers, blaring a chant of sort while banging drums. They really got the crowd going. Some groups had semi-organized dancers, others threw candy for the children. 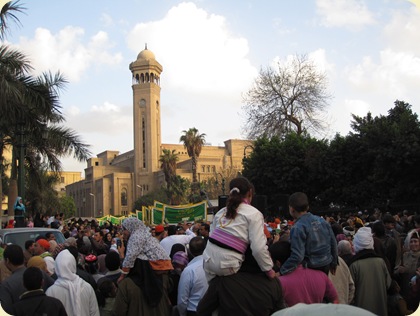 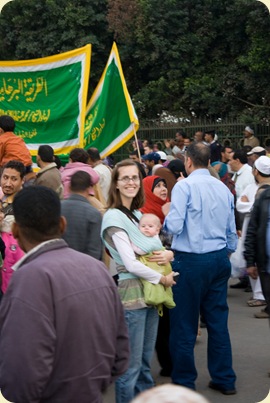 We all got right in the thick of things, which was fun. The girls got plenty of attention from the other parade goers, of course. Everyone wanted to know their names, to take their picture—we even had a news photographer snapping pictures of our family—and to give them kisses and candies. Children would run out to get candy and then flock to Rachel, who was up on Andrew’s shoulders, waving their candy at her for smiles. She pocketed quite a few generous children’s candy this afternoon. 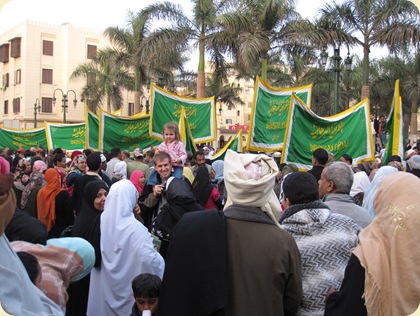 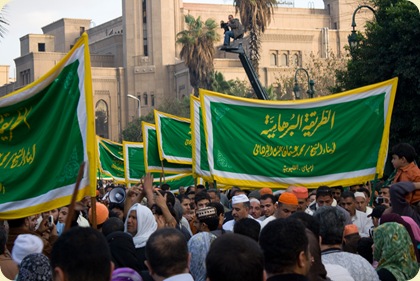 I took so many random pictures of children—they love to have us snap pictures of them and then show them themselves. These girls were following me around for quite some time before they finally got brave enough to ask for a photo. 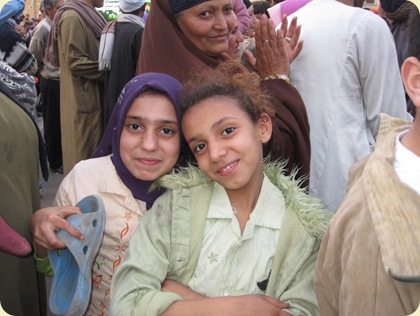 It’s interesting that with all these people around we weren’t concerned about pick-pockets at all. If we had been in Europe we would have been guarding our pockets and bags with our life, but we were so relaxed here. I wasn’t carrying anything very important, anyway, but pick-pocketing just isn’t a big thing here so we feel absolutely comfortable going out in public, even into huge crowds of people. We can’t exactly say the same thing about Italy. 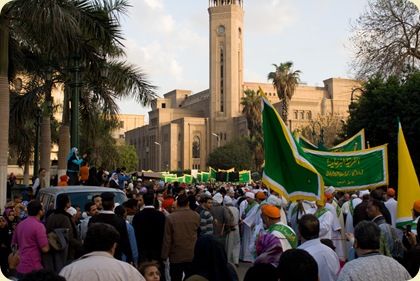 Back on the other side of Midan Hussein, revelers were having a great time spraying each other with foam, which is apparently something they enjoy doing during holidays. 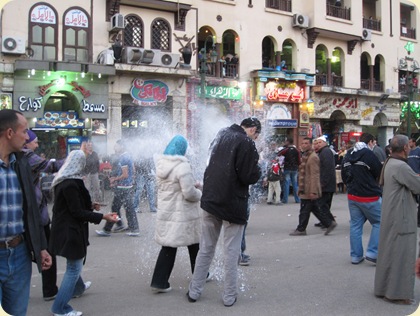 We debated for a while about whether we should taxi home or take the metro. Since it was late and we were all tired and hungry we opted for the taxi—faster, less crowded, more comfortable. 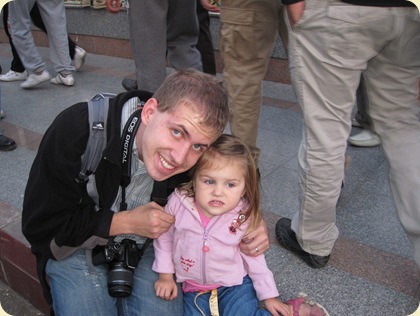 We walked over to al-Azhar mosque to hail a cab and ran into a bridal party. I asked if I could take a picture of the bride and ended up getting roped into a full-on photoshoot. It was a little embarrassing but these things happen. What can you do? 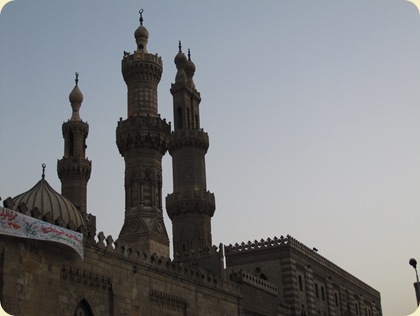 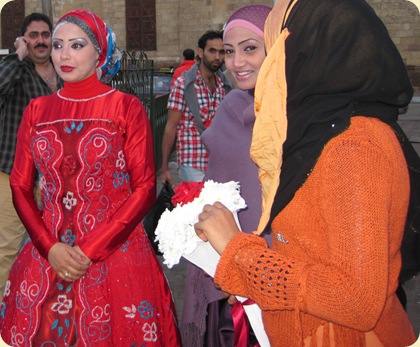 She was so layered up in frills and so worried about mussing her makeup that she could hardly move. But she was happy to get a picture with Miriam… 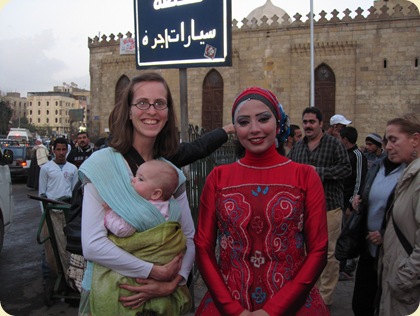 We found a taxi and headed out of the chaos of the Khan and home to Maadi. Both of the girls fell asleep within minutes of getting in the cab. Things were pretty slow-going, which we expected, until we got to the Citadel where we got stuck in an complete standstill, which we were not expecting. We sat staring at the Muhammed Ali mosque for twenty minutes and did not move an inch. 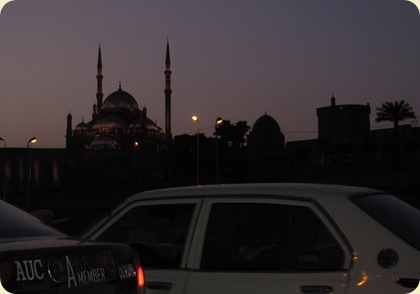 All I could do was sit and watch the meter go up, since we had quite unluckily grabbed a metered cab. When things started moving a little again (and I mean very little) our driver suggested we try the Korniche. It was no better so I told Andrew that we should just head to the nearest metro station and get out, which we did.

We got dropped off at al-Malek al-Saleh—or almost there. We couldn’t quite get to the station because the road was blocked with a large puddle of water and a downed tree, courtesy of yesterday’s storm, I’m sure. So many roads are inaccessible, it’s a little ridiculous. We walked from the Korniche, past the tree, and to the metro station, finally making it home after 7:00. We were completely exhausted. 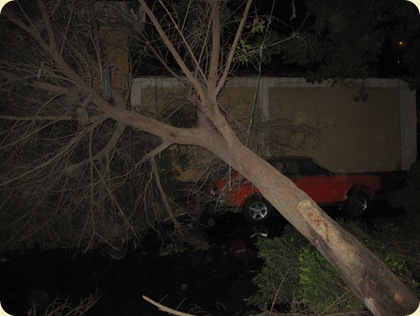 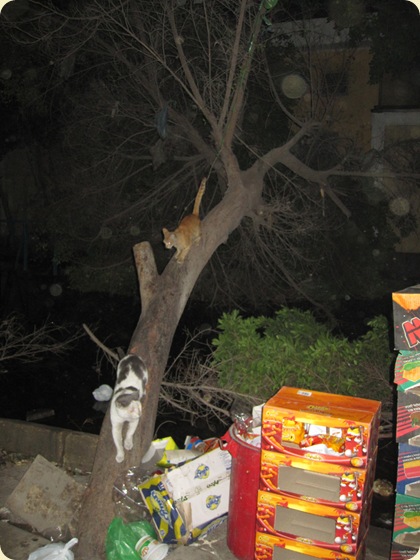 Luckily the girls were troopers and neither one had a meltdown while we were out. I fully did not expect their good behavior to last on the metro, but they were wonderful. The minute we walked in the door, though, and both of them broke into tears and began whining about how hungry they were. It’s not like we didn’t bring snacks—sheesh! I think we are all glad that we went out to see a mawlid, though, even Andrew (who is now probably behind on his daily thesis quota…sorry).