Today is Mawlid al-Nabi so I dragged Andrew out of the house—literally dragged him—to go downtown to see the celebrations. He was a little grumpy about having to give up his Friday afternoon nap and insisted that he wanted to take a taxi downtown since he didn’t feel like battling the metro. There weren’t many taxis to chose from and he got tired of waiting so we ended up taking the metro, anyway, which was fine.

We got off at Attaba and Andrew suggested that we take a walk through Ezbekiya Gardens before heading off to Midan Hussein. Right now I’m reading Birds of Passage by Robert Solé, which Andrew read a few weeks ago. This book takes place around Midan Opera in Attaba—where the old opera house was before it burned down. The entrance to the gardens is literally right at the metro exit, if you take the right exit, that is. The tickets are 1 LE per adult to keep riffraff out, but if you don’t want to pay the bars of the fence are spaced so that you can slip through. I watched several people do it.

Ezbekiya was the al-Azhar Park of a hundred years ago, laid out by the former chief Gardner of Paris and designed to feel like a British park. The area was formerly a swampland of sorts and various palaces were built around it—Napoleon, himself, “obtained” a palace here. It is also where the mawild celebrations used to take place during the time of Muhammad Ali.

Rachel was in heaven. The minute she saw the grass she took off running. She kept saying things like, “I just want to have more and more fun!” 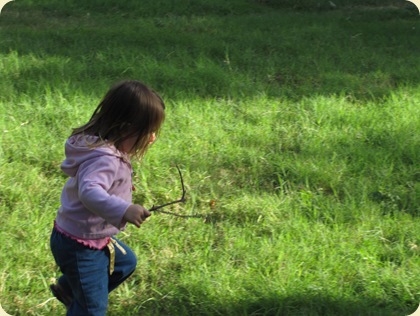 Andrew stopped to talk to this cute elderly man reading the newspaper through thick coke-bottle glasses. While the man was recounting the history of the area he mentioned Muhammad Ali and some boys that were playing around began asking questions. The old man settled down to give them a history lesson; the boys were all ears. They talked the whole time we were at the park—it was quite amazing to witness. I don’t think our youth in America have that kind of interest in history, as a general rule, nor are our elders quite prone to the tutelage of random kids off the street. 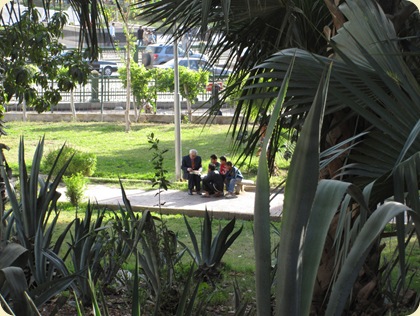 We followed a few nice walking paths and were pleased with how quiet and peaceful the park was. There were no hordes of people flocking us like at al-Azhar and no guards around to tell us to keep off the grass. It wasn’t as well kempt but chances are al-Azhar park will look similar in another century. 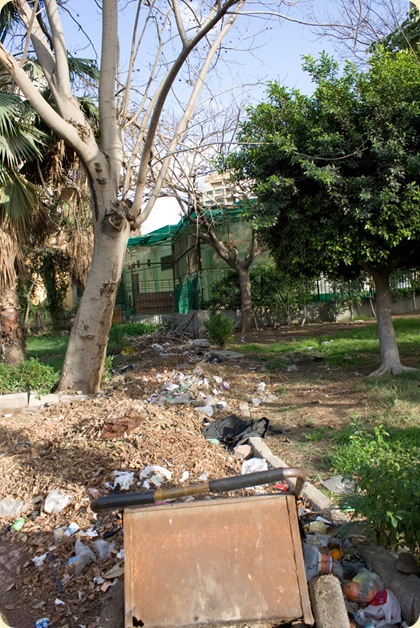 Rachel and I “hiked” to the top of a hill where she declared, “I can see the whole world from up here!” Her exuberance for life is wonderfully refreshing. 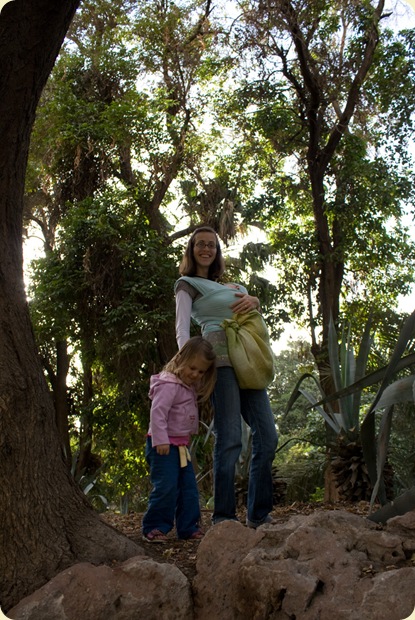 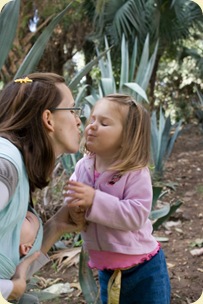 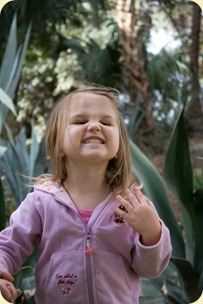 The skies were nice and clear to day and the plants were lush and green, probably thanks to the big storm that we had yesterday. It was nice to see the contrast of the blue and green instead of having them both dusted over with a greyish-brown. 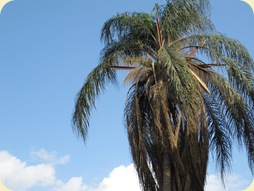 This is one of my favorite trees here, some sort of Bombax tree, most likely the Bombax ceiba but I’m not sure. It bursts into huge red flowers around February and March—flowers so big that calyx tube fills the palm of my hand. When they drop from the tree they fall like torpedoes. Later the tree will get its leaves, grow capsules full of cotton and make a big mess everywhere. But the flowers certainly are impressive in the early spring. 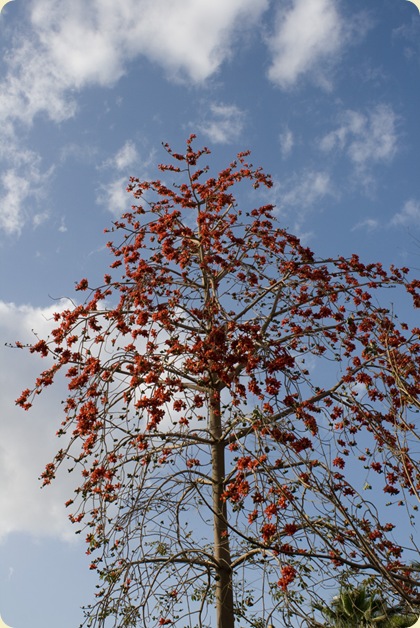 For some reason we saw several matchelss shoes scattered around the park. It was almost eerie how many we saw. We made sure that each of us had a shoe on either foot before leaving the park. 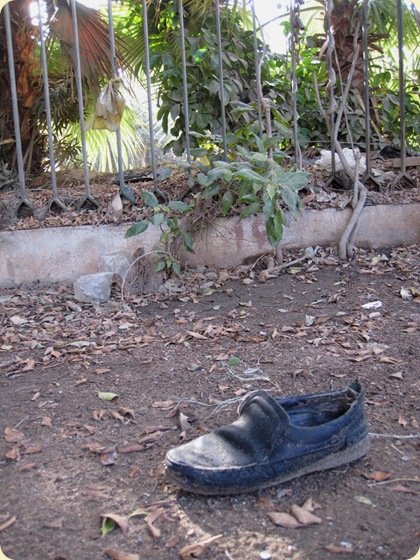 Rachel had fun playing on the benches, “hunting” for snakes, climbing trees, hitting trees with sticks, rolling in the grass, and splashing in the mud—stuff kids are supposed to do. 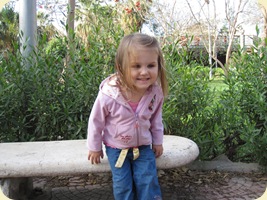 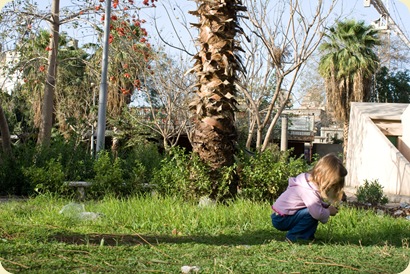 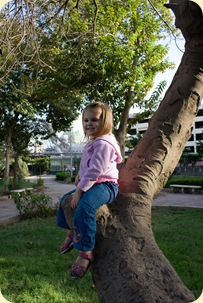 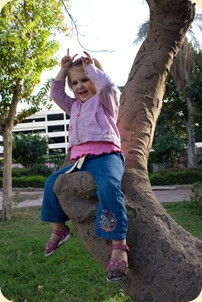 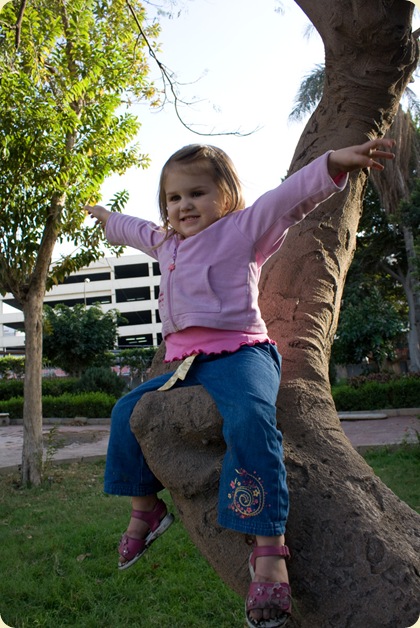 We let Miriam get down and explore, too. She wasn’t too sure what to think of the grass at first but soon decided it was probably edible. That’s what she’s been deciding about almost everything lately. 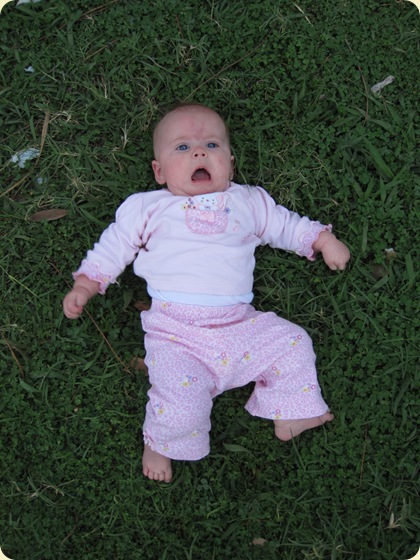 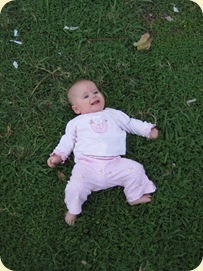 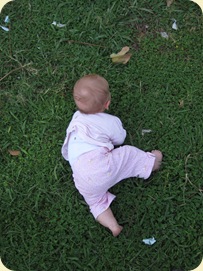 I wasn’t able to decide which pictures were the cutest of her so I just put in a whole lot. I hope you don’t mind. 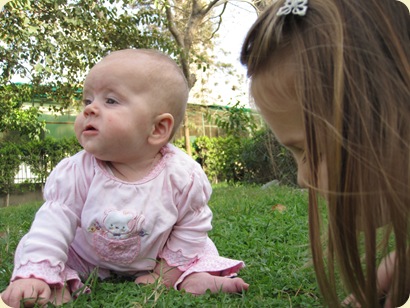 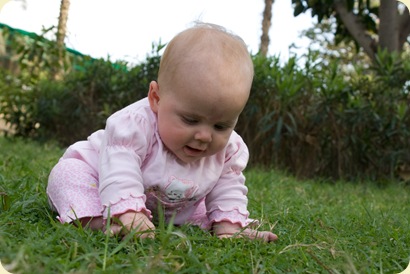 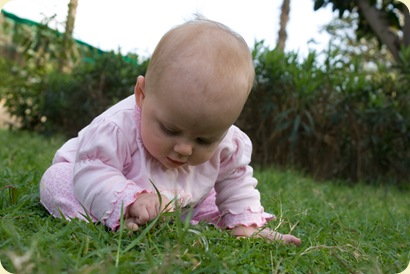 Rachel wanted to hold her but couldn’t keep focused long enough to actually keep her up. It was like, “Can I hold Miri-ooh! A stick!” Then Miriam would topple to the ground, which she didn’t seem to mind much since it meant her mouth was that much closer to the lawn. 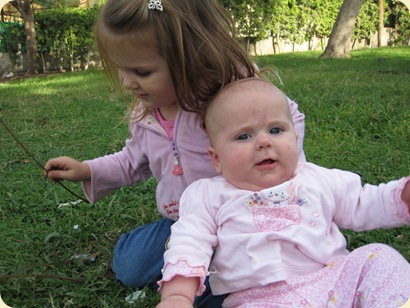 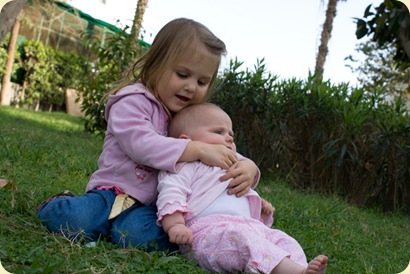 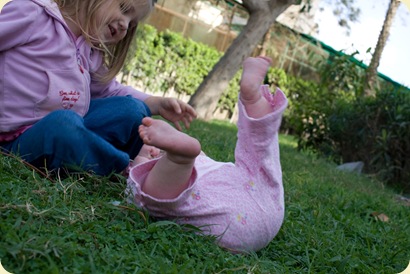 Miriam tried a little standing and even picked up a twig and suggested that she and Rachel try a little fencing. I told her that her stick was a little wimpy and Rachel would pummel her for sure. She spent the rest of her grass-time pulling up fistfuls of grass while Rachel fenced with trees using much bigger sticks than the one that Miriam had armed herself with. 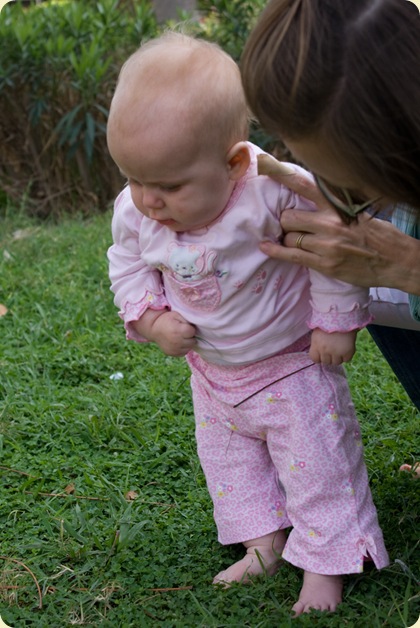 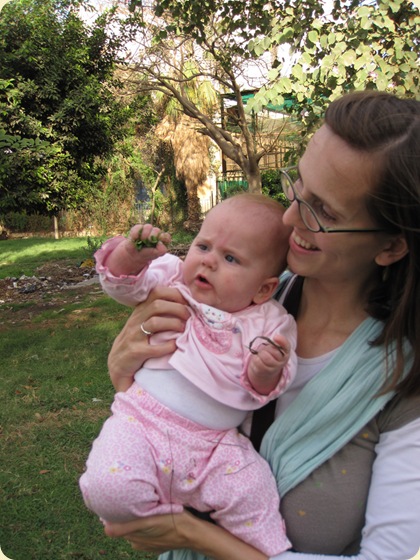 Andrew busied himself playing photographer, obviously—you can tell since he isn’t in any of the pictures. 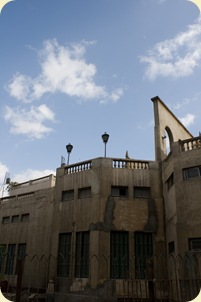 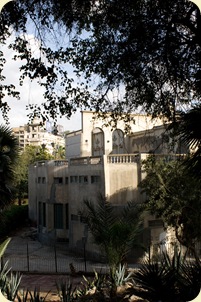 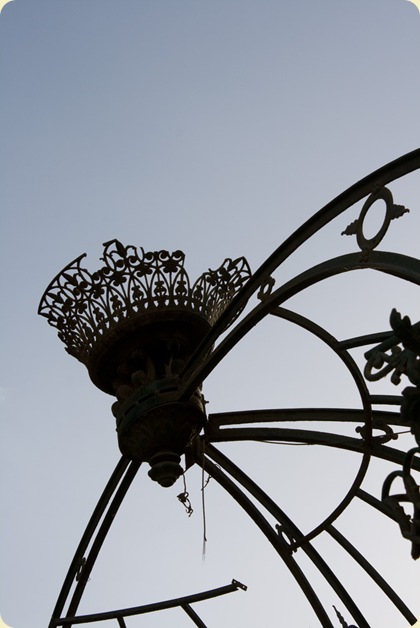 I had a wonderful time playing with my girls and Andrew. It was a perfect Friday afternoon.