Next up on our literary tour of Cairo was The Lamp of Umm Hashim (and other stories) by Yahya Haqqi. This story takes place in the area of Cairo called Sayyeda Zeinab, around the Sayyeda Zeinab Mosque. It tells the tale of “Uncle” Ismail, who left his home and family to study medicine in Europe after missing the cut in his exams in Egypt. His family lived impoverished but comfortably and scrimped and saved to support him in his educational endeavors abroad.

Haqqi aptly describes the bustle of Cairene life as viewed from an outsider when Ismail tells of his feelings upon returning to Cairo.

“The sight that met his eyes was uglier than anything he had imagined: dirt and flies, poverty, and buildings in a state of ruin….Nothing but a sprawling piece of mud that had dozed off in the  middle of the desert. Above it were clouds of flies and mosquitoes…”

Interestingly enough, though, he also describes Cairo as a place of great beauty, which I’m sure is how many Cairenes feel about their city and how I have come to view parts of their city. As Ismail fell in love with England, so too have we fallen in love with Egypt. It’s home, what can I say?

“In his mind Egypt…was dressed in all her jewelry and finery for the night of consummation. Cursed by God is the eye that cannot see her beauty and the nostril that cannot smell her perfume.”

Cairo is a stark juxtaposition of beauty and horror. Haqqi plays on that beautifully.

Another theme that Haqqi addresses is faith verses agnosticism. Ismail comes home with worldly knowledge and downplays, even ridicules, the role that faith and God has in life by smashing the lamp of Umm Hashim, the oil of which was believed to have healing powers. He found that, after crushing the faith of others, his newly gained, tried and tested, methods for solving problems—in this particular case, the eye ailment trachoma—fails. Haqqi promotes the idea that God is needed in our life even if we have a lot of worldly knowledge and Ismail comes to accept this by using his modern treatments alongside traditional folk medicine.

Anyway, Haqqi tells it much more beautifully than I ever could, and, of course, Andrew and I decided to go explore al-Sayyeda Zeinab neighbourhood. That’s actually how we started our day today, if you can call leaving the house shortly before noon “starting” your day.

The Arab world is slow to wake up, anyway, so when we got off the metro at Sayyeda Zeinab the market was barely starting to open. 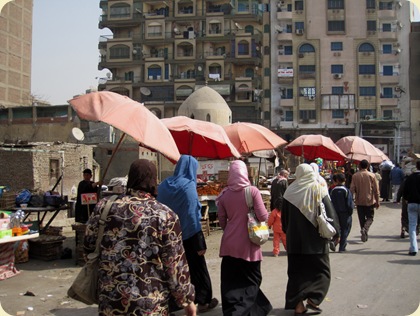 We caught a taxi just outside of the market on Mansur and rode it to Midan al-Sayyida Zeinab, which was all decked out to celebrate Mawlid al-Nabi with large displays of sugar dolls and tents set up in all the streets. 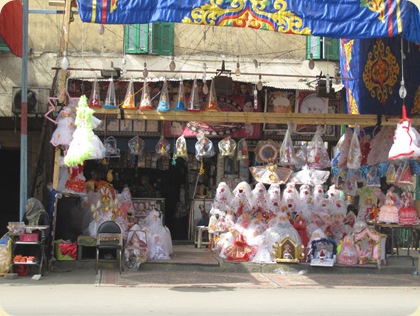 The celebrations in Sayyeda Zeinab were being sponsored by some politician who had banners up all over the place touting his name. 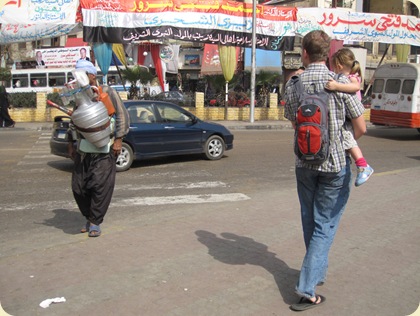 The Sayyeda Zeinab mosque houses the shrine of Sayyeda Zeinab, also known as Umm Hashim (as in the Hashimites). She is the sister of Hussein, granddaughter of Mohammed and is revered as a saint, especially by women. Her mosque is a very popular mosque and we happened to show up right at prayer time, which was bad timing on our part. Still, we weren’t turned away. 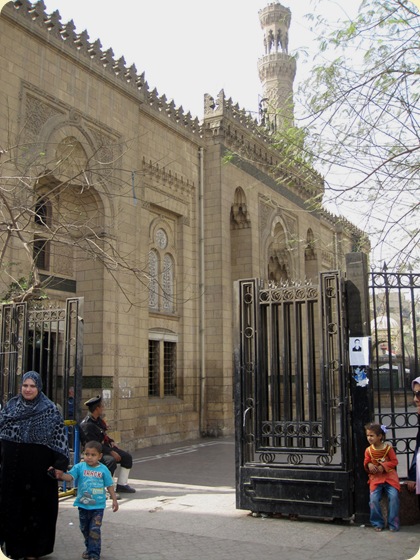 We shyly made our way around the mosque, snapping a few pictures along the way, while everyone was urging us to go inside and take a look. It was definitely something they wanted to share with us. 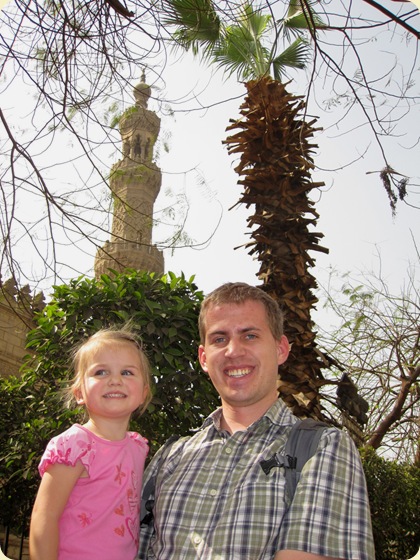 Since the entrances for men and women were separate, we took turns going in and sitting outside with Rachel. I suppose I could have taken her in, but I was glad that I didn’t. The shrine area was a veritable mosh pit and Rachel would have been trampled for sure!

While I was waiting outside with Rachel and Miriam, Rachel started acting up, whining about wanting to be held and trying to climb up into my arms that were already full of Miriam. A woman noticed and led me to some nearby stairs, found a clean piece of garbage (a plastic bag in this case), laid it on the stairs and invited me to sit down. Then she stood post near the gate of the men’s entrance and waited for Andrew to come back out, directing him to where I was sitting when she saw him. 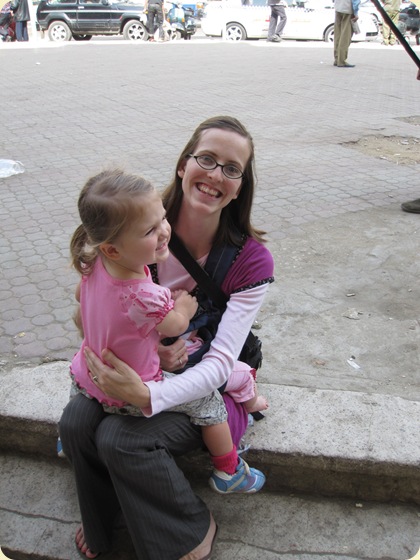 She (and a dozen other women) also pointed out to me that my girls were in short sleeves and my baby’s feet were bare. I assured them all was well, asserting that it was no longer cold. They tsked at me but deep down inside I think they knew I was speaking the truth—it was about 90°F (32°C) today and I don’t know of anyone who catches cold from going outside barefoot in that kind of weather.

Andrew watched the men pray and then flocked with them to the shrine of Umm Hashim. By now the lamp is electric, so no oil can be used for home remedies anymore. 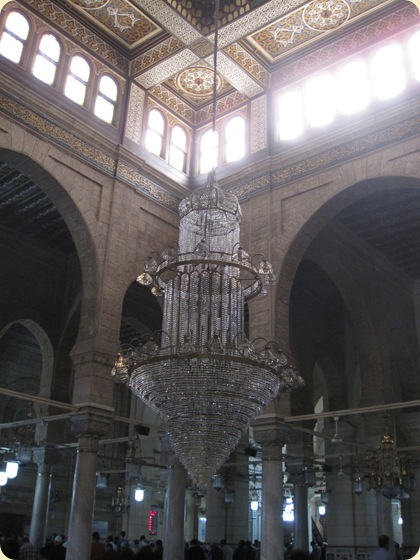 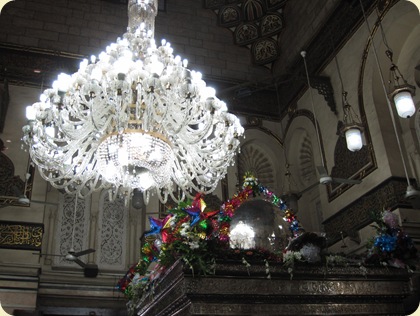 By the time I went in prayer was over but the place was still swarming with women. I’ve never seen so many women in one mosque at one time—their prayer area was huge compared to the piddly section I’ve seen in most other mosques. Probably half the mosque was set apart for the use of women.

Just to get in the mosque there was this Disneyland lineup of sorts, with forced queuing. Everyone inside was very kind, pulling me toward the shrine to get a good look when I was too timid to approach it on my own (I’m not a very good mosher). The men workers were a bit gruff, telling me that no photos were allowed…even though the sea of women angling to get a good glimpse of the shrine was awash with the flashes of cameras.

I gave up trying to make my way through the crowd after a few minutes. It was overwhelming having so many bodies pressing against my own, muttering instructions, insults, and innocent comments at me in a language I find myself barely able to understand.

After wandering around the neighbouring suq, we left al-Sayyeda Zeinab mosque and headed to the Khan to complete the remainder of our itinerary for the day. 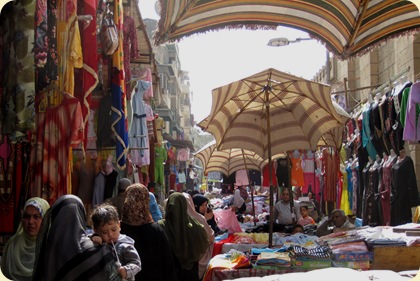 We’ve taken taxis from Sayyeda Zeinab to the Khan before, but they always take a long, roundabout route that ends up costing much more than we ever want to pay, so before we left today Andrew looked up some directions so that he could tell the cab driver how to get where we wanted to go.

We caught a cab at Midan al-Sayyeda Zeinb on Bur Sa’id and followed that to Midan Bab al-Khalq. We turned onto Ahmad Mahir and got off right at Bab Zuwela. It only took a few minutes and cost us less than 4 LE.It surprises me to find out how close in proximity things are in this city that always seems so huge and sprawling—I suppose it’s simply more dense than sprawling, but it still seems huge.