I do love me some V-day

We went grocery shopping today and brought along the camera just in case we happened to see anything interesting, because you never know, right? Well, it happens to be Valentine’s Eve so of course we ended up something interesting since Valentine’s Day is fast becoming one of the most-loved holidays in these parts (despite all the naysayers) if decorations are indicative of preference.

Just a few days ago the flower shops bordering the tracks by Midan Digla were ordinary flower shops. By today, however, they’d erupted into a sultry display of Valentine pomp and fluff and stuff.

I told Andrew that I’d settle for no less than this sickeningly huge and rouge teddy bear that could swallow me whole. *gag* 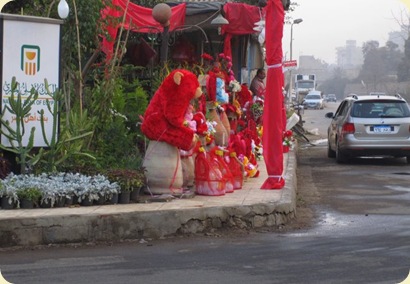 Apparently Valentine’s Day holds a little controversy in the Arab world. Daniel Pipes is good at kicking up controversy and lists several riveting dictates from political and religious leaders on his site. I wasn’t so sure that I believed that Valentine’s Day was an issue in Egypt since the flowery, perfumey, heart-shaped evidence everywhere leads me to believe the opposite, but I also found a blog of a disgruntled local who claims allegiance to Egypt’s Day of Love…even though she had forgotten the holiday existed.

Perhaps the naysayers can explain this display: 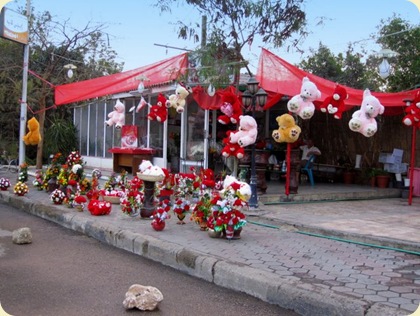 Or am I the only one creeped out by the hanging teddy bears?

The problem with Valentine’s Day is that it is seen as a vulgar, mushy holiday, and Christian to boot. I’ve never seen it that way, though.

When I went to school I had to bring a Valentine for every one of my classmates—of course, I grew up in a Socialist country so it might be different in other less-Socialist places…but I don’t think it is because I had to help my tutee make Valentine's for each of her classmates this past week. Even the ones she didn’t like. That was hard for her.

She had to write a compliment for everyone.

“What’s something nice about Omar?”

“Just write: You are a good friend.”

By the way, she has a kid named Putt in her class. I really hope that his father likes golf. A lot. I can think of no other reason to name a child Putt.

I still don’t think of Valentine’s Day as a “romantic” holiday. Andrew and I make pizza. Write a nice note to each other. Make sure to wish his mom a Happy Birthday. That kind of thing.

It’s a nice opportunity to be reminded to remember to appreciate each other. A candlelit dinner might be nice *hint, hint* but I wouldn’t say that Valentine’s Day promotes promiscuity.

We already made Valentines for Family Home Evening. We had a very short lesson on Valentine’s Day that went kind of like this:

Me: (reads brief summary of first paragraph of Wikipedia article)

Me: So, what do we celebrate on Valentine’s Day?

Me: Okay, yes. What do the hearts mean?

Me: That’s right! And who do we love?

Me: And our grandmas and grandpas and aunts and uncles and cousins and friends and everybody. Now we’ll make Valentines.

Everyone made one for everybody, except for Rachel who made about thirtnine* for Miriam. She loves her sister. 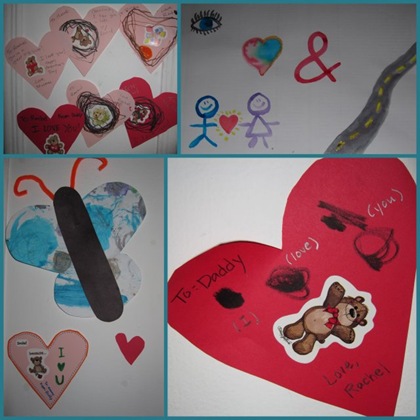 My favorite Valentine is from Miriam. She writes:

Rachel and I made owl Valentines for some of her friends, the kids I tutor, and her nursery class. And Andrew. Here’s the one I made for Andrew: 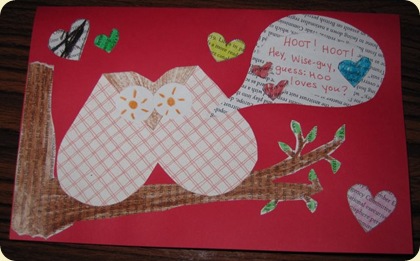 And the copy-cat one that Rachel made for him: 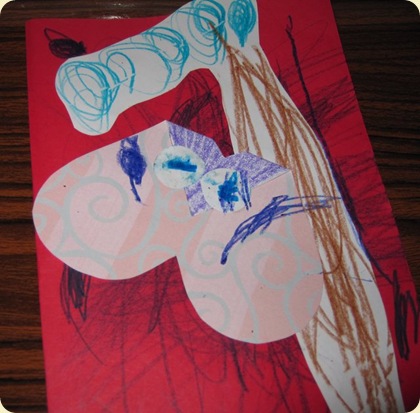 See? It’s an innocent holiday used by classmates, friends, and family to remember to love each other a little more. It also happens to be highly commercialized and while we personally don’t buy into that, apparently the local florists have.

* Thirtnine comes after twelve when Rachel is counting, but only if six is skipped and if she repeats eight, nine, ten, eleven several times before saying, “Twelve, thirtnine!”

** Meme rhymes with cream. It’s been Miriam’s nickname since before her birth due to Rachel’s inability to pronounce Miriam. Also it’s a “is a postulated unit of cultural ideas, symbols or practices, which can be transmitted from one mind to another through writing, speech, gestures, rituals or other imitable phenomena.”