This morning I told Andrew that I need to interact with my children. I feel like I've been leaving them alone far too much—did I mention I'm sick? He told me that amazing things have happened while I've been sick and my children seem to have learned to entertain themselves. I should have abandoned them long ago (just kidding).
They've been building towers out of lego, making up stories with their dolls, and also doing a lot of drawing.
Rachel watched James and the Giant Peach for the first time this week. It's a new obsession of hers. She  has actually watched it more than once this week—Andrew let her watch it by herself yesterday. Grandma said she thought it would be a little scary for Rachel, but Rachel loves it. She also will watch Harry Potter I by herself and loves it. But the new Winnie the Pooh movie? That's too scary.
Anyway, here's her picture of the giant peach. James is in the lower righthand corner. On the peach we have a ladybug, a grasshopper, a centipede, the stem, and a spider: 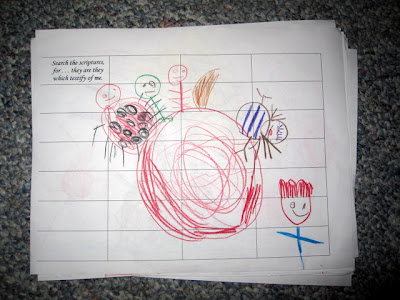 She hasn't given up on Harry Potter, though. Here's Hermione: 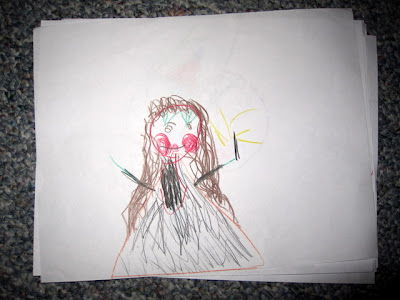 And here's Santa, though I think he looks more like a skinny, little elf: 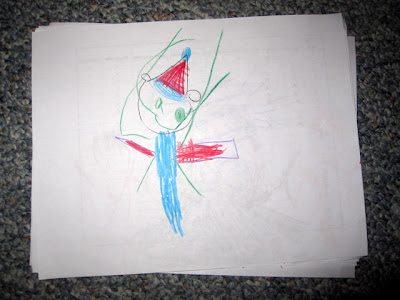 A spider on a web: 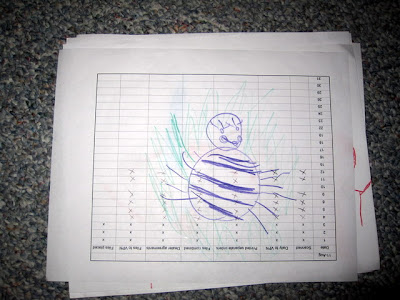 Hermione and her pals, Harry and Ron. You can tell the order in which Rachel favours the characters based on the effort she puts into drawing them. Hermione is always very detailed, Harry starts out well and then fizzles out, and Ron is more like an afterthought: 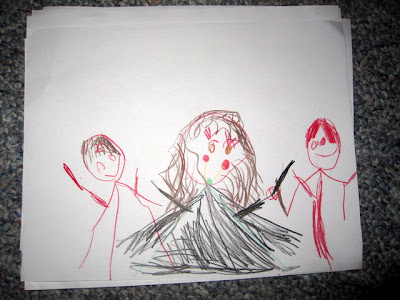 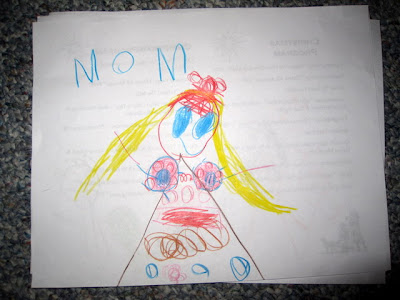 And lastly, a picture of the Harry Potter crew and their animals. This time we have Neville and his toad, Crookshanks with Scabbers standing on top of him, Hermione, and Harry with Hedwig: 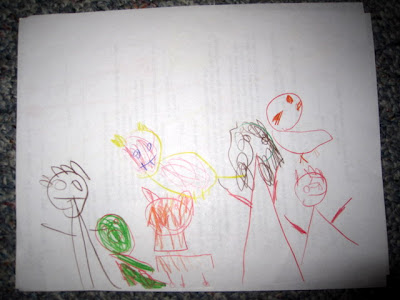 Miriam is becoming a blossoming artist as well. She's been experimenting with faces and limbs and occasionally even torsos: 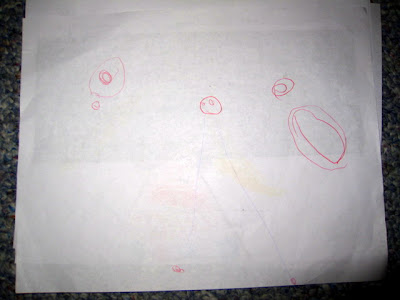 Miriam knows when she's drawing a smile or a frown and is obsessed with adding feet to things (though not necessarily anything else (like legs or arms or necks or bodies)). It's fun to watch them develop their skills...even if they never become world-class artists, it's at least an outlet for them now!
Posted by Nancy at 4:00 PM