It seems a little early for Christmas parties yet but our ward Christmas party was tonight, so we went. I always enjoy ward activities and kind of wish we did more of them—as a primary teacher, I don't get a whole lot of socializing in at church because I'm always busy chasing around children (either my class or my own). It's nice to get together and just...chat.
Near the end of the evening we sang some Christmas carols and then started singing some Santa songs to herald in the man himself. My children were among those in the first row, happily singing Christmas songs. They did not, however, join the mad dash to Santa. Rachel timidly made her way to the other children, who were by then thronging the jolly old man.
Miriam took off running in the opposite direction at a killer pace.
She's been excited about Santa coming to our house. She's been talking about what she wants him to bring her. She's been singing Santa Claus is Coming to Town. But apparently that was before she had any idea what she was talking about. One glimpse of Santa and the look on her face read, "I'm not so sure I want this guy coming down my chimney, after all."
Rachel took her turn without crying or kicking (Hallelujah! She's growing up!) but she was still rather shy of him. Even though it's just Brother Longson under all that hair. 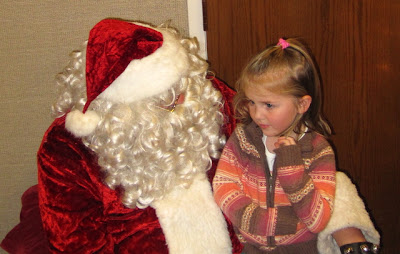 I don't know what she asked for this year because there were too many excited children around for me to hear, but earlier she told me that she wished that Santa would bring her a dollhouse. I told her she already has a dollhouse—and that's partially true...it just happens to belong to Grandma. Since we'll be moving in a couple of months (hypothetically speaking) I don't want to have to lug around a dollhouse. I asked her what else she wanted and she said a candy cane. I told her that we could probably manage that one. 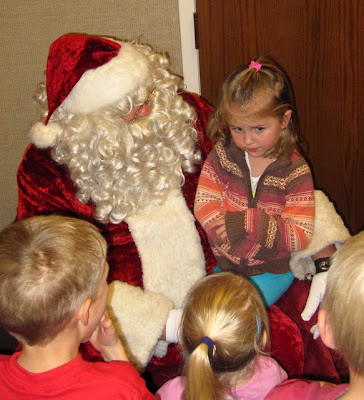 I held Miriam while the 10 and 11 year old girls (all three of them) hung around me, trying to convince Miriam to go to Santa. Then Rachel wandered by, toting the goodies she got from Santa—each child got a baggie of candy, including a lollipop. That was the selling point for Miriam. 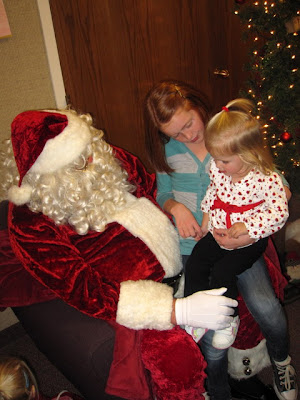 She consented to sit on Santa's lap (with Trinity acting as a buffer) in exchange for a lollipop. 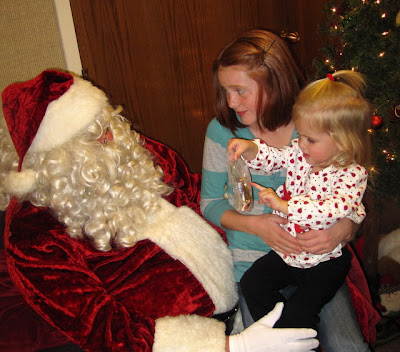 I don't think she told him anything but she was pretty happy about that lollipop!
Posted by Nancy at 1:52 AM