Spanish Fork does a light display every year and Grandma suggested we go and then one day at dinner said, "We should go today." So we did.
Rachel insisted on playing I Spy in the dark, which was a little more difficult than playing it in the daylight. At one point she said she spied something green but no one could guess what it was. Finally she sighed and said, "It's the grass!"
"I'm pretty sure the grass is brown," I said.
"Mom," she explained matter-of-factly, "Everybody knows grass is green."
"But it's winter," I explained back, "And the grass is dead."
Today when we went out and Rachel saw the grass she sighed and said, "You were right. I was less right."
"About what?" I asked.
"The grass is brown!" she said, sounding just a bit puzzled.
I suppose we're used to the brown grass being covered by snow but this year it hasn't really snowed, so...
Anyway, the lights were wonderful. They had a rocking horse and a ski jumper and some figure skaters that really moved. A frog that flicked out its tongue to catch flies. That sort of thing. The girls were mesmerized. 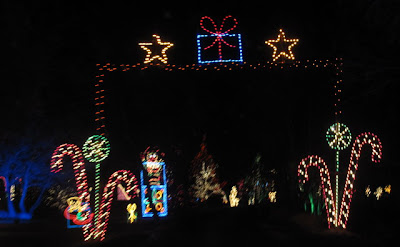 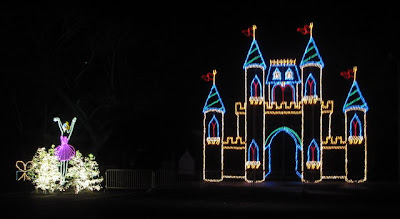 We drove through twice, though the girls could have kept driving around in circles all night long. 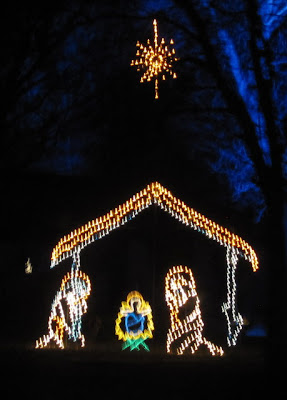