Who's got a great big cherry nose?

I do.
Or at least, I did.
We went to the Santa parade in Provo today. Yes, we're that crazy.
I bundled the girls up in their snowsuits, which I thought was going to be overkill but I'm so glad I made them wear them, anyway. I guess I didn't really make them wear them; I merely suggested that they do so and they were more than happy to comply. Can you believe it's only snowed like three times this season? There was a light dusting of snow when we woke up this morning, but that's all. Not that I'm complaining. But the girls were sure excited to get to wear their snow pants!
The parade was fun, but definitely cold. 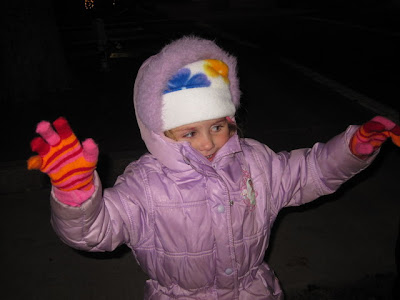 I felt worse for the people in the parade than I did for those watching. This is because I was in the Santa Claus parade in High River when I was in grade five. I was so excited to be chosen to represent our school on our float...until I realized that honour entailed sitting on an itchy hay bail for a couple of hours with a smile frozen on my face (literally—because it wasn't just -3°C/27°F like it was in Provo today but more along the lines of -20°C/-4°F (more likely colder)) while I stiffly waved at the crowds because my arm wouldn't move enough to do it any other way. It was not the most fun I've had in a parade.
And, yes, I've been in more than one parade.
It's because I'm famous. 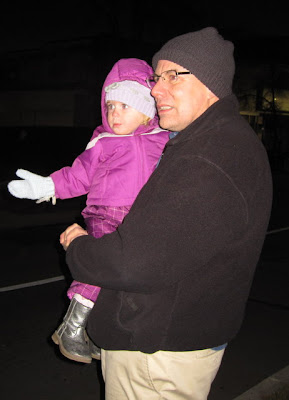 Oddly enough, there weren't hordes and hordes of people at the parade. Probably because it's freezing outside. (But in High River the parade is rather popular; probably because Canadians are crazy and below freezing temperatures don't scare them away). This was beneficial for us, though, I suppose, because people were going around handing out handfuls of candy. We got enough candy to rival Halloween. 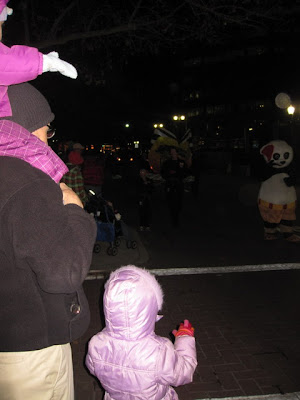 We filled Grandpa's pockets and started filling mine when I realized that I (almost) always carry around a grocery bag for emergencies. Then we started filling that up, instead. We got, in addition to candy, an apple, a pear, a couple of glow-in-the-dark things, and a whole bunch of fliers.
One flier was inviting us to join the Carollamas, who go Christmas caroling (while asking for food bank donations) with live llamas. I'm not even kidding. 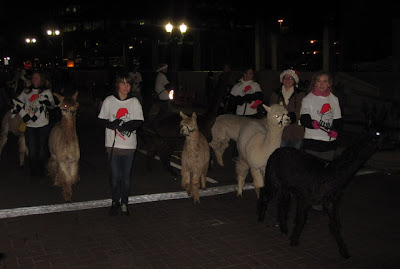 We were getting so cold toward the end but stuck it out until we saw a glimpse of the old man, himself. 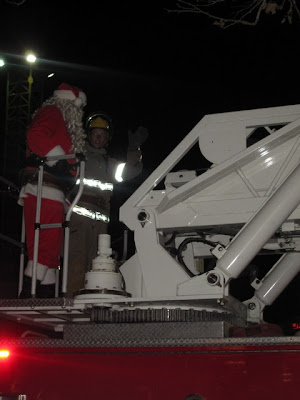 Then we rushed away to get to our van. Actually, we sent Grandpa rushing off to get the van while we dawdled through the Marriot lobby because we didn't want to walk all the way to the car in the cold.
Provo also does a Santa Run every year. I thought about doing it this year but didn't ever end up signing up and blah, blah, blah. Anyway, you get a Santa suit when you sign up and you can only run the race if you're wearing some sort of Santa suit (you don't have to wear the one they provide, necessarily). We were walking to the parade route and were passing groups of Santas. The girls found it a little confusing and Rachel specifically asked how we'd ever spot the real Santa.
I told her it would be like hunting for Waldo.
We saw all types of Santas—fat Santas, thin Santas, tall Santas, short Santas, baby Santas, old Santas. There were Santas everywhere. We even saw one guy who'd dressed up as the Grinch dressed up as Santa. It was fun to see so many Santas all at once.
It was also fun to come home and warm up.
Posted by Nancy at 11:24 PM