Two years ago we were in Egypt for Christmas and Christmas fell on a Friday which meant that we had church on Christmas day. When Andrew found out Christmas fell on a Sunday this year he was rather confused about how that was even calendarically possible until I pointed out the differing days of Sabbath observance in the places we lived at the time.

When we lived in Egypt Andrew unwisely suggested on Friday morning that we go ahead and open some presents since we were all up, anyway. We unwisely went along with his suggestion and many tears were shed when we had to stop opening presents to get ready for church.

This year we wisely decided to go Grandma's route and taped sheets over the entrances to the living room so that no one (read: children) could even peek inside. We went to church distraction-free.

I was happy to have Grandma and Grandpa come to church with us—they're usually at the BYU ward—because I was feeling so sick and Andrew was kept so busy at the organ and piano. He played for the congregation, the choir, and the primary children. I didn't get to sing at all, even though I was supposed to sing with the choir, because my voice was so totally shot. I was rather sad because I love singing Christmas carols and now we won't sing any until next December. It's like I missed Christmas!

Rachel sang with the primary, though. She didn't want to because it was "too scary." Andrew was up on the stand, though, so getting her up there was easier than I thought—she just ran up to her daddy and then he escorted her to where she needed to be on his way to the piano. Even though I know she knows all the words to this song (we've been singing it before bed every single day for an entire month) she only sang a line or two before she froze—hands clasped together, a big, fake smile pasted on her face.

The primary children finished singing and returned to their seats.

A member of the bishopric leaned over, tapped her shoulder, and invited her to go sit down.

She ignored him and remained a smiling statue.

I waved at her to get her attention and beckoned for her to join our family.

She ignored me and stayed rooted to the ground.

Reid leaned over and whispered, "I think you're going to have to go up and get her." So when the youth started filing up to sing their musical number I went up, too, grabbed Rachel's hand, and pulled her off the stand. She happily—gratefully—walked with me back to our row.

"Mom," she said, "Everybody was staring at me!"

"Of course they were," I said. "You were the only one up there. Didn't you notice everyone else went down to sit with their parents?"

I'm not even sure she noticed that they had finished singing at all, let alone left her up there by herself. It was funny (but, as my mom pointed out, only to everyone but Rachel). 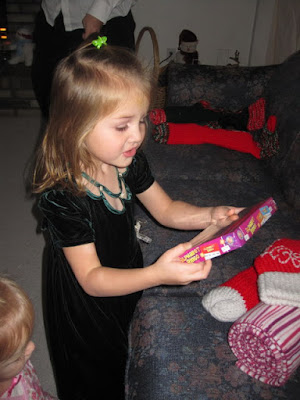 After church we dove headfirst into the presents. The girls were excited about everything. 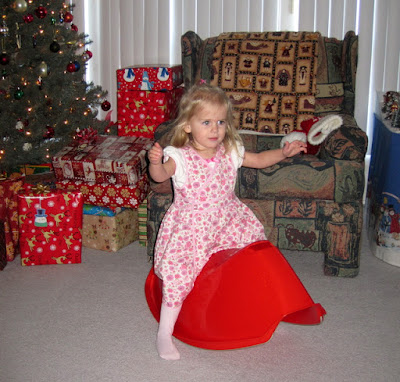 Rachel's big present was a blanket, which might not seem as cool as a teeter-totter but to Rachel it was a thing of beauty. It was big. It was pink. It was hers. 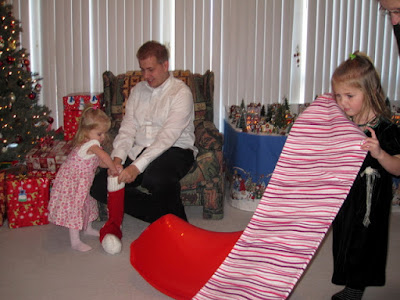 Other than that, we mostly got them super cheap presents—not that the teeter-totter or blanket were all that expensive (they were both under $10)—like 25 cent stuffed animals from IKEA. 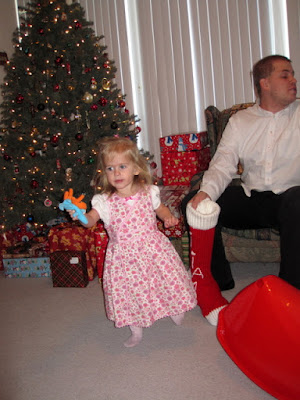 We went to IKEA, obviously, and did most of our Christmas shopping there. Rachel saw this bin of rats and asked if she could have one. We said no. Because we were doing Christmas shopping. But I went back and got one for her. We wrapped it up, addressed it to Hermione and said it came from Hogwarts. 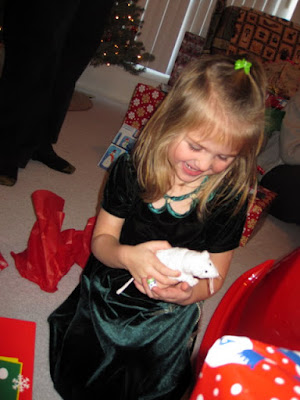 She was giddy with excitement and immediately named it "Scabbers." 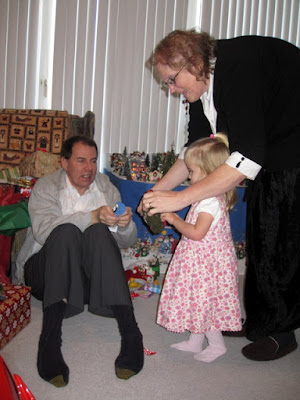 Miriam needed a little more help opening her presents than Rachel. Grandma and Grandpa helped her. Andrew helped Rachel read the tags on each present so that she'd know who each gift was from but she did most of the unwrapping by herself. 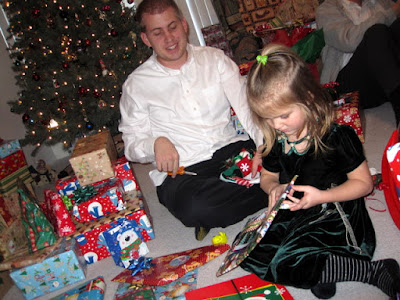 I sat on the couch in a stupor and snapped a few photos. Days later I keep finding random toys, wondering where they came from, and then remembering that we had Christmas. All I wanted for Christmas was a nap, which I got eventually, but not before opening presents of my own and visiting with our extended family.
Andrew surprised me with a Kindle reader. He'd been saving up credit card points and decided he'd spend them on me for Christmas. It was quite a surprising surprise.
Our family descended upon us just as we were finishing up with our unwrapping so we quickly moved our stash into the bedroom in order to make room for company.
I had put Miriam in the outfit Auntie Sarah and Uncle Cory bought for her—a cute lady bug outfit that matches the one Grandma got for Rachel a while back (but is different from the lady bug outfit that Grandma got for Miriam). But by the time they got there, someone had slipped Miriam a chocolate that she didn't quite like—I think it had nuts in it or something—and she started spitting it out all over the place and wiping her mouth on her sleeves. So we had to change her shirt. And then she decided to put a jumper over top.
So by the time Sarah and Cory arrived it didn't look like Miriam was wearing her new outfit at all. 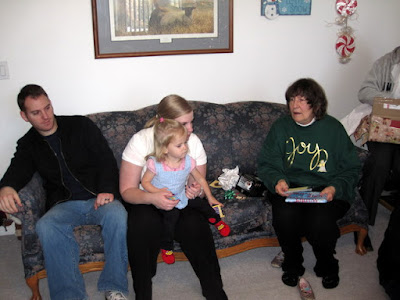 She still had the pants on when this picture was taken but about two minutes later she wet her pants (from excitement?) and so those had to be changed, too. 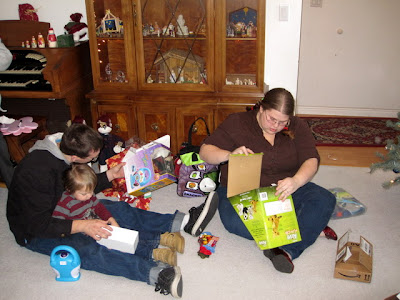 Grandma Pat and Dave and Aunt Katharine and Uncle Todd and Kayl and Aunt Nicki and Emma and Richard and Diana and Michael all came over for lunch, too, so we had a full house. 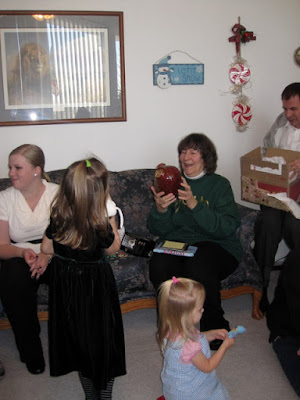 Sometimes you have to include two pictures that are nearly identical. Like this one with Nicki—who hates her picture being taken but looks fine in this picture—has Emma closing her eyes. But Emma was sure to smile for the second take while Nicki did not. 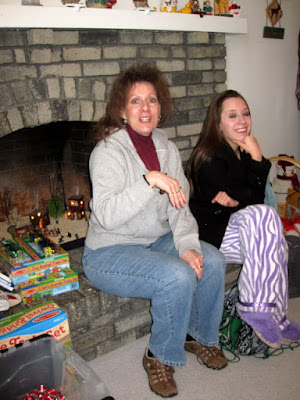 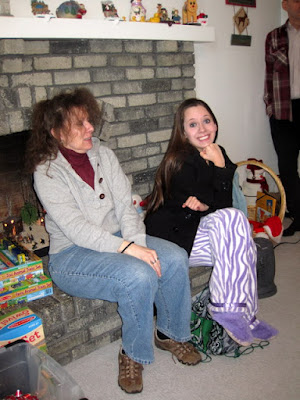 Auntie Sarah gave our family a little folding table set—with princesses on it. We set it up for the "kid table" and they all loved it. Michael pointed to Tiana and said, "I've seen that movie!" 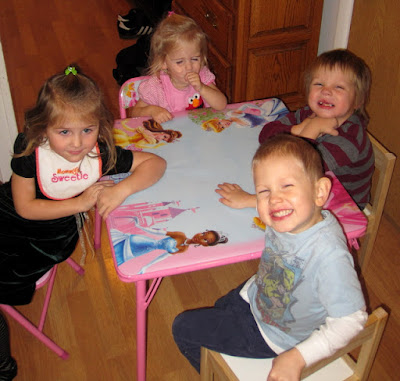 This is another time I have to include more than one picture. I love how the kids went from smiling at me to admiring each other—Rachel's beaming at Michael and Kayl is glancing at Miriam. And Miriam and Michael are just grinning at the camera through it all (even if it is from behind a thumb). 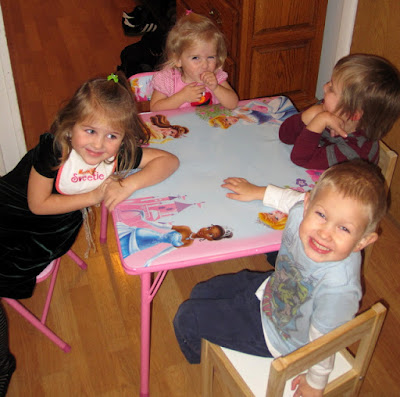 We had a good lunch and some nice visits and then people started filtering out the door and Miriam went down for a nap and Rachel began entertaining herself with some new Littlest Pet Shop toys (from Grandma) and so I went to take a nap. I don't think I even excused myself or said goodbye to our remaining guests. But I did sleep for a full three hours, which was fabulous because for the two previous nights I hadn't managed to stay asleep for more than an hour at a time. I woke up feeling more alive than I had in days, though really still quite ill.

It was a very Merry Christmas, though—in spite of the sneezing and sniffling—and it was so much fun to get to spend it with our family!
Posted by Nancy at 4:54 PM