Happy Anniversary to us!

Our anniversary is today. Today is also my grandpa's viewing.

So we celebrated yesterday!

Andrew put his name in the pool for tickets to the conference center for the Mormon Tabernacle Choir Christmas Concert. And he won—I guess... I'm not sure how else to say it when you have a 1 in 20 chance of getting tickets. We were happy to get to go. We haven't gone for six years—we went shortly before we got married six years ago.

We left around 3:30 so we could go out to dinner beforehand. Andrew found a Thai food place—the Thai Lotus Cafe—just off the tracks system. And it was fabulous, though a little more expensive than the Thai restaurants around here. We got there just at 5:00 but everyone was bustling about in the kitchen and no one noticed us for about ten minutes, which was kind of awkward. The upside was that we had plenty of time to look at the menu and decide what we wanted. We sat down, the waitress handed us some menus, and we said, "We know what we want." She thought we were uber decisive, which we're not. 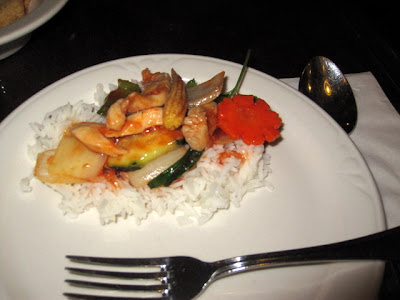 Andrew got a spicy cashew beef dish (there was a spicy cashew chicken dish but I just couldn't bring myself to order it because if it wasn't identical to the one at Bua Khao then I knew I would be disappointed).

The waitress brought out some sort of chip with a peanut sauce and that was really good but we had only eaten a chip or two each when they brought out our food. And it was awesome. And I was glad I got the sweet and sour dish because it was delicious and the spicy cashew dish was not the same as Bua Khao. 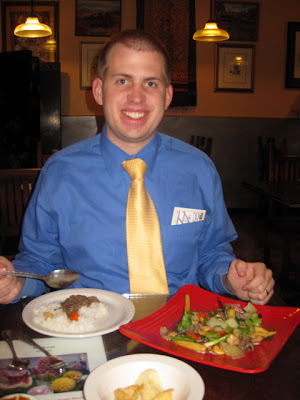 After dinner we walked back to tracks and zoomed along to temple square. We walked around enjoying the lights and nativities until we were too cold to function. 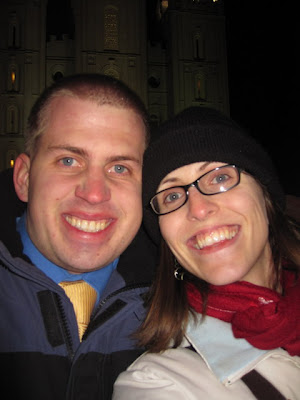 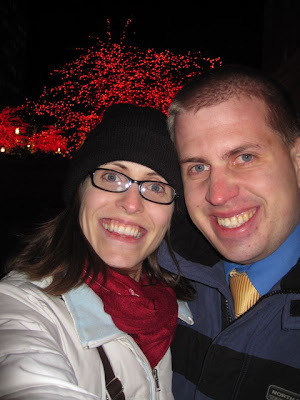 Then we went to find our seats at the conference center. We were super early, but that was alright because it was warm in the conference center and because we got there so early we go decent seats in our section (which was in the balcony, but still, we were pretty close to the front of the balcony). This year's special guests were Jane Seymour (you know, Dr. Quinn, Medicine Woman) and Nathan Gunn ("one of the most exciting and in-demand baritones today," according to the program...I wonder if by calling him "in-demand" they were alluding to the fact that in 2008 he was voted "The Sexiest Man Alive" by People Magazine).

The program was fantastic and because it was only the dress rehearsal they got a little speech-happy on us and kept telling us how excited they were to be in Salt Lake and performing with the MoTab and so forth. Apparently the Christmas devotional is broadcast by PBS all over the country—they get 4 million viewers for this program annually and they said it's a wonderful gift to give to people all over the country who are suffering and are in need of wholesome, uplifting entertainment during the holiday season. I quite agree. It was an amazing show!

We walked out on the balcony of the conference center after. It was a pretty but chilly view. 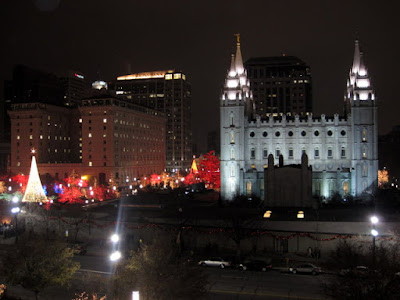 Then we bustled through temple square to catch the train. We didn't end up getting home until nearly midnight—silly construction traffic—so we ended up spending a good eight hours on our date. I'd say it was a successful anniversary celebration.
Posted by Nancy at 12:20 AM