This morning my mom phoned to see if we wanted to hang out today since both she and my dad had the day off of work. I said that we did because Andrew was working and I thought he'd appreciate some peace and quiet at home while he did so.
We went to the dollar theater, or as Miriam says, "Movie city-er," to watch Puss in Boots. We were not the only ones to think of this activity—the theater was packed and we had gotten there a little late. We were so lucky to find three seats together (we just held the girls on our laps).
It was so lovely outside today (like 50 degrees lovely) that we decided to stop at a park on our way home. All we were wearing was light jackets and we were fine outside for an hour. How's that for December 30th? 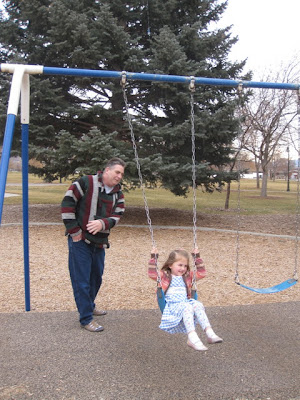 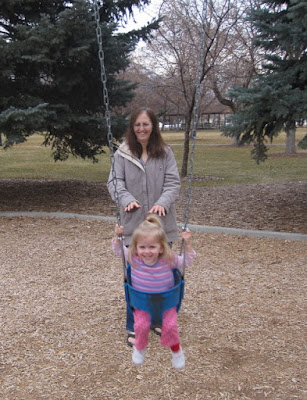 The girls kept going on the dinky baby slides... 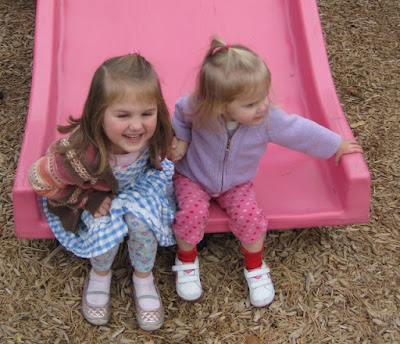 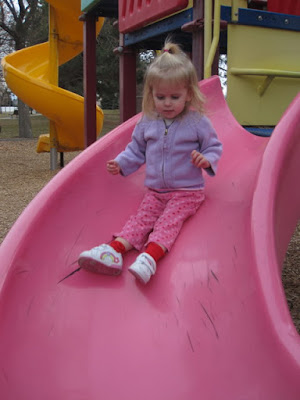 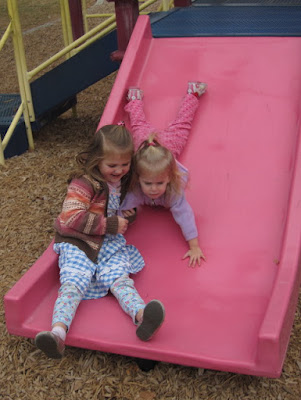 So I went up in one of the tall towers to show them that the slides were both safe and fun. 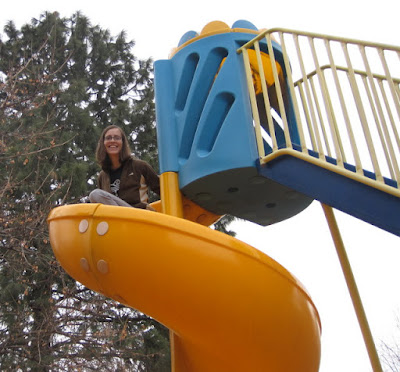 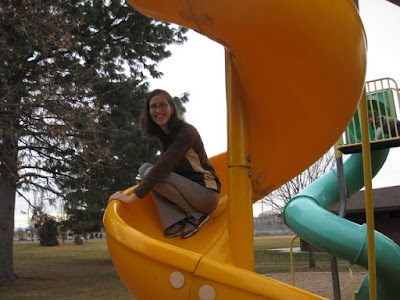 It helped my kids brave the medium-sized slide, which they used over and over and over again. Each time Rachel would leap off the end with a huge smile on her face, clutching her bum in agony, but then she would race back up to the top to do it again. 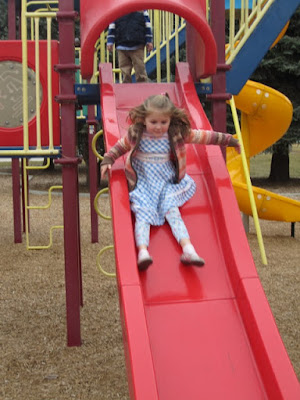 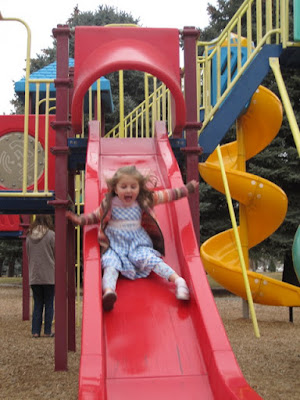 Rachel can get pretty goofy. 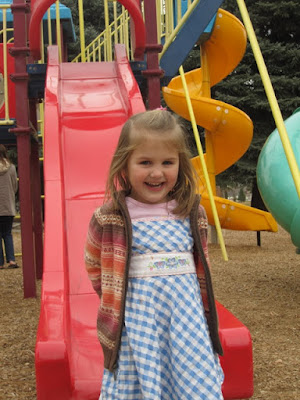 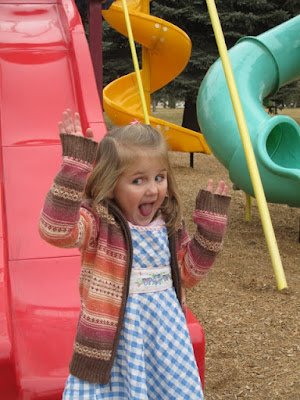 Miriam got brave enough to go down the green slide, which was the second-tallest slide (the yellow one being the tallest). Grandpa helped her get to the top and then sent her on her way. When she got to the bottom she looked a little terrified but managed a throaty, "Hah-hah!" 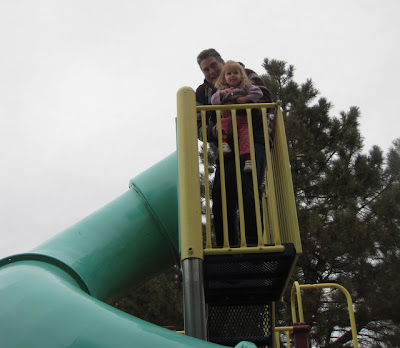 After that the girls stuck to the red slide, mostly, though many valiant attempts were made on the taller slides. Rachel said she'd do the yellow slide all by herself and ran off to climb up the stairs.
"Don't tell her the yellow slide is taller," my mom whispered.
But by the time she got to the bottom of the slide and looked up she seemed to have figured it out on her own and ran back over to us explaining that she had decided to try the green slide instead. She climbed up to the tower and then flipped out and climbed back down to hang out on the pink slides for a while. 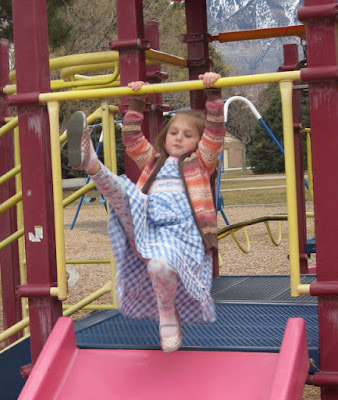 Miriam wasn't quite as traumatized with the height and managed to continue to experiment with different slides. 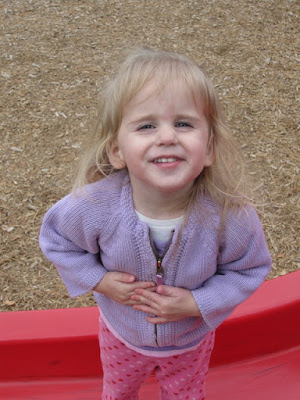 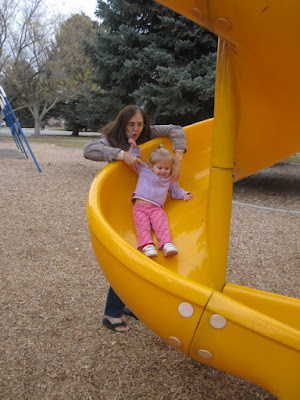 Rachel insisted on catching her at the bottom of a few even though Miriam is perfectly capable of sliding by herself. 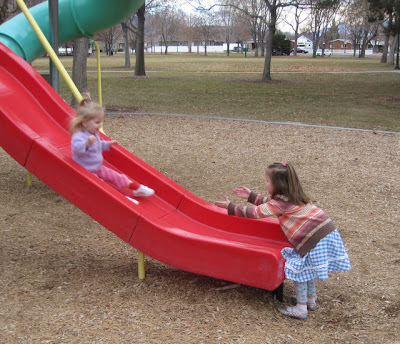 My dad got in on the sliding, eventually. I have to admit, I was a little afraid that he'd get stuck in the tube slide half way and we'd have to call someone to cut the slide apart to rescue him. But I've always been afraid of tube slides, so... 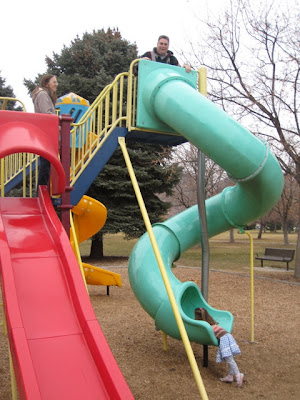 He managed to come out at the bottom and then convinced Miriam to join him on his second slide (she had already climbed up to the tower and was playing "telephone" with Rachel, who was at the bottom). She seemed happier sliding down with him, although when he asked her if she wanted to go again she declined the offer. Rachel threw a fit every time we brought it up so she didn't ever end up going down. 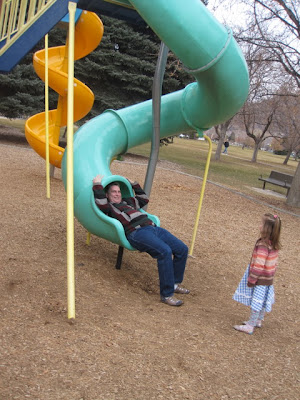 This was certainly not an activity I ever imagined I'd be doing in Utah on New Year's Adam but it was fun to get outside without bundling up and the girls enjoyed getting to run around again. Winter brings with it such horrible cabin fever... 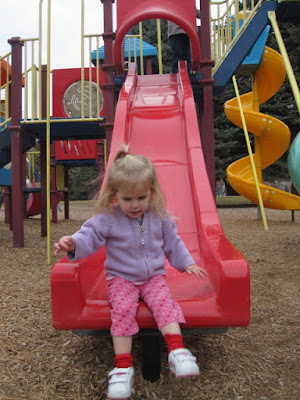 I may have overdone it (this was my first time really leaving the house (or vehicle) since I got sick last week...blah) because when I got home I felt exhausted and by 6:00 my dull headache had turned into a rip-roaring headache that was making me feel dizzy and queasy. And so I took a three hour nap. At 6:00.
Because that's what responsible parents do.
At least Daddy was home to take care of the girls. I think he gave them a bath that lasted a good hour and then Grandma and Grandpa got home from their date (they went to see Sherlock Holmes and then out to dinner and then came home and mocked us for having lame tomato soup and grilled cheese sandwiches—rude!) and after Daddy did scriptures and prayer and story time with the girls, Grandma took over for rocking and lullabies (which is the point in the bedtime routine where Daddy simply doesn't cut it).

I'm lucky to have so many adults to help out with my kids so that when I have to shut-down they still get taken care of!

Miriam fell out of bed (I think she stages it, I really do—she's been doing it so often recently and there is a bar on her bed to keep her from doing so) at around 9:00 and started sobbing. Andrew went in to console her but it woke me up, anyway, so I went in and rocked my girls again. They had been staying up hoping that I would come in and say goodnight so it's a good thing I decided to get up instead of staying in bed all night. I guess.
Posted by Nancy at 12:46 AM