This year's letter was a little difficult to write. Apparently. I didn't know that when I started because I started and even finished writing it in November. But that was before we had decided when and how we were going to announce our pregnancy and before my grandpa died. After letting it sit for a few weeks, I opened it again to revise it and found that I had accidentally written the closing part to the tune of 2013.

Are you sure next year is only 2012? Because that totally threw off my rhyming scheme! 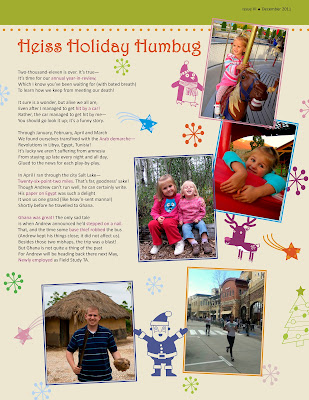 Two-thousand-eleven is over. It’s true—

It’s time for our annual year-in-review,
Which I know you’ve been waiting for (with bated breath)
To learn how we keep from meeting our death!
It sure is a wonder, but alive we all are,
Even after I managed to get hit by a car!
Rather, the car managed to get hit by me—
You should go look it up; it’s a funny story.
Through January, February, April and March
We found ourselves transfixed with the Arab demarche—
Revolutions in Libya, Egypt, Tunisia!
It’s lucky we aren’t suffering from amnesia
From staying up late every night and all day,
Glued to the news for each play-by-play.
In April I ran through the city Salt Lake—
Twenty-six-point-two miles. That’s far, goodness’ sake!
Though Andrew can’t run well, he can certainly write.
His paper on Egypt was such a delight
It won us one grand (like heav’n-sent manna!)
Shortly before he travelled to Ghana.
Ghana was great! The only sad tale
is when Andrew announced he’d stepped on a nail.
That, and the time some base thief robbed the bus
(Andrew kept his things close; it did not affect us).
Besides those two mishaps, the trip was a blast!
But Ghana is not quite a thing of the past
For Andrew will be heading back there next May,
Newly employed as Field Study TA.

Our summer was busy with road trips galore—

Arizona, Alberta, Nauvoo and Rushmore!
We hiked Devil’s Tower, saw Old Faithful blow,
Then ended our trip in Rexbug, Idaho.
July brought a birthday—our Rachel turned four!
She’s learning to read, write, to add and, what’s more,
Can make her own sandwich. Now there’s a good trick!
(They grow up too fast; it’s making me sick.)
We, of course, made the annual pilgr’mage to Grover,
With mud the girls plastered each other all over.
We heartily savoured our camping communions
And also enjoyed a few fam’ly reunions.
By mid-fall my brother David left for school.
He’s living in Leeds now, close to Liverpool.
Shortly after he left my dad made his way back
From Heidelberg, Germany, where he lived in barracks.
Our dear family suffers from peregrination—
Will we ever all be on one side of the ocean?
Miriam’s two now; it’s hard to believe!
She loves the church nursery—my only reprieve—
Though if she could manage to escape my cruel grip
‘Round the corner, with Rachel, I know she would skip
Off to preschool. Her yearning for learning, you see,
Rivals that of her brilliant and brainy daddy.
In November we found out a new babe is due
To join our small brood. It’ll make its debut
Right ‘round the time little Rachel turns five.
Three kids and two parents? We hope we survive.
On December 13th my Grandpa returned
Home to heaven. But through his example I’ve learned
That hard work is good, and so is glad laughter,
And that families can live happily ever after.
When Andrew completes this current degree
Will we go somewhere new for a PhD?
Or maybe we’ll try out a job for a while,
Become an official employee, rank and file.
It seems our biennial dilemma is this:
Get a job or pursue academical bliss?
We don’t know what it holds but Two-Thousand and Twelve
Is a year into which we whole-heartedly delve.
We hope you enjoyed this year’s Christmas letter
And that it finds you and your loved ones much better
Off than in previous years. But, if it doesn’t,
We hope the New Year will be cheery and pleasant.
Love from,
Andrew, Nancy, Rachel and Miriam
Posted by Nancy at 2:00 PM