It was my mother-in-law who told me my grandpa had passed away.

Andrew and I were just getting ready for bed—I had even checked facebook before I shut down my computer and there was no news from anybody yet—when Karen came upstairs and asked if my grandpa had died.

And that's about how emotional I felt about it. I suppose it's because part of me has already grieved and the part of me that hasn't knows that there will be time for that later on, and also because we've been expecting it for a while. It comes more as a relief than as a surprise. I think surprise deaths are more difficult to handle.

Now we're all preparing for the funeral full swing. Before we were making tentative plans because you can never tell, really, how long death is going to linger. I'm glad it didn't linger longer than it had to. We've been scanning pictures and making plans and so forth.

This morning I told Rachel that Grandpa Layton had died and she got much more emotional than I did, though much of her emotion was curiosity about how exactly the spirit separates from the body and then how they come back together during the resurrection. I told her that I simply didn't know and that we don't have to know everything.

And here's one that my sister Abra wrote about him:

For her sake, I'll include this picture, because I think this is the picture she's talking about: 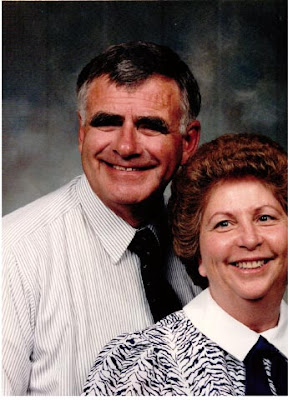 And here's another one from their younger-older years. I think it was either before or during the time my grandma had braces on which is why her smile's not as big as it is in the later picture. I can't even tell if this is the 70s or 80s. 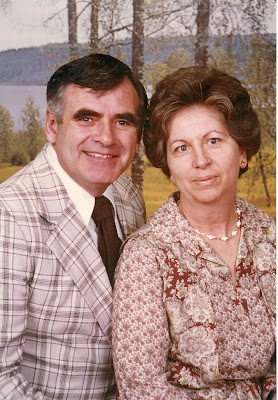 Believe it or not, there is still more to say about my grandpa. Like, I don't think I've mentioned once that he's a twin. Or that he started his own drywall business. Or that he once crawled in the crib with a fussy baby and slept there all night (and he is not a man small of stature).
But for now, I'll just think about what to write and write more later when I have more pictures. That will be more fun, won't it. I'll always regret not being curious enough about my grandparents until it's too late. I need to be more curious about my grandma now. She's the only grandparent I have left.
Posted by Nancy at 1:25 AM