My grandpa is dying, quickly.
The doctor said he has about a week to live. When you are old there are signs—very visible, obvious signs—that you are about to die. We learned about them when my Grandpa Conrad died eleven years ago. For example, you begin to lose your muscle tone and your bodily functions quit one by one. But perhaps the most telling sign of all is the purple colour creeping up your legs.
"After the purple passes his knees," a nurse told my grandma, "It will be any moment."
When my grandma was diagnosed with liver cancer less than three years later, she sat in her bed at home, watching her legs turn purple. Death started at her toes and slowly worked its way up to her knees. And then death consumed her.
Was that too morbid?
I'm not feeling at all jolly today.
Seeing my grandpa was shocking. The last couple of times we've seen my Grandpa have been relatively fun. He acknowledged our presence. He played with the girls. Today he sat in his wheelchair—sometimes with his eyes open, mostly with his eyes closed. He's frail and bony—much more frail and bony than the last time we saw him. He's dying.
When we were getting ready to go to the party, Rachel was excited.
"You mean we get to see your grandma and grandpa Layton? That will be fun! Grandpa Layton likes to play that blanket game with us where he steals it away!"
"I don't think Grandpa will be playing with you today," I said.
"Why not?" she asked.
"He's very sick," I told her.
"So sick he's going to die?" she asked.
"Yes, so sick he's going to die," I confirmed.
What is wrong with me? I've known for a few days now that his life was coming to a close and I hadn't yet begun to prepare my children to accept his death because I've been so worried about preparing myself. I don't think I had even mentioned it until right as we were getting ready to go.
We've been talking about death all evening since then.
After we'd were wrapped up Grandma and Grandpa Layton's gift, Rachel picked out a little card—a nice, shiny purple one that went so well with our red and white holiday-themed paper—and signed her name.
"Mom, can you help me spell, 'Sorry Grandpa is going to die,' on the card?" she asked.
"You know," I said. "I know you're sorry that Grandpa is going to die but I'm not sure that a Christmas card is the best place to express those feelings. You can tell Grandma that at the funeral and then you should probably just say, 'I'm sorry; we'll miss him.'"
"Oh, fine," she said.
But you know, besides that, the party wasn't all grim. In fact, parts of it were pretty fun.
Rachel was excited to get to play with her cousins. Rosie was kind enough to help entertain the little ones. Here they are playing Follow the Leader: 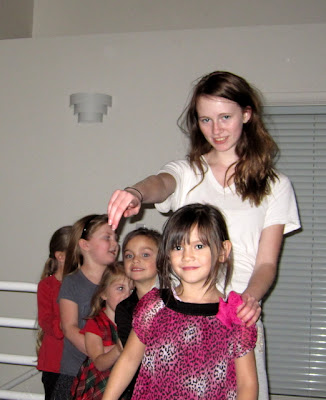 And here is Kelli leading them in a game of Simon Says: 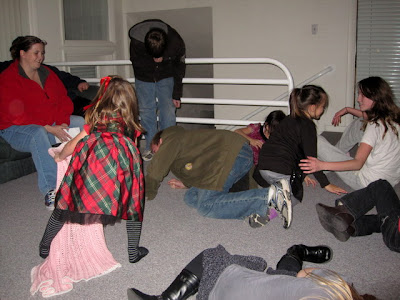 We had a delicious potluck dinner and after we all took pictures with Grandma and Grandpa. 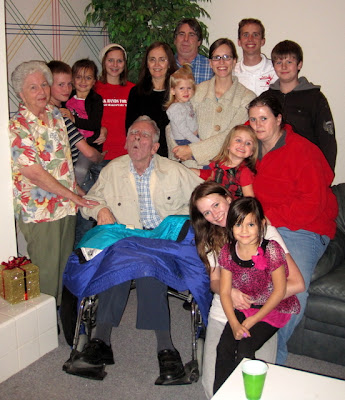 Let's see if I can name everyone in an orderly fashion for Abra:
From L to R in the back we have Grandma, Andrew holding Sabrina, Josie, Mom, me holding Miriam, and Matthew
In the very back we have Dad and Patrick.
Grandpa is in the wheelchair. Kelli is sitting beside him holding Rachel.
Rosie is in the front holding Olivia.
And here we all are again with slightly different expressions on our faces! 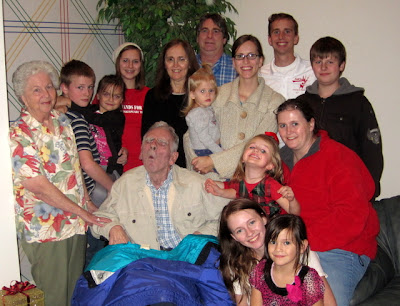 I actually much prefer the pictures we took with Grandpa back in September to these photos, though I'm sure I'll find others still that I'm even more fond of as I help my dad go through a box of photos so we can scan them and make a memorial slideshow for Grandpa's funeral.
Andrew and I were talking about how this is the first family death we've had since we got married. At first I had feelings of relief for my grandma—she is so exhausted from taking care of Grandpa all these years—but then I had a sudden panicky feeling about how incredibly lonely she was going to be. I never realized once thought of that when my Grandpa Conrad died but I guess now that I'm married my mind works differently.
Andrew and I concluded that we would just have to never die so that we'd never have to be lonely.
There I go talking about death again. *ahem.*
Uncle Ken "dressed up" as Santa. His costume wasn't really all that convincing but Miriam was completely sold. And that's why it's completely pointless, in my opinion to decide whether or not to "have" my children believe in Santa. They're going to believe whatever they want to, anyway.
Here's a skinny man dressed in Wranglers, cowboy boots, a dress shirt, and a Utah Jazz jacket. Oh, and a Santa beard and hat.
Must be Santa. Must be Santa. Must be Santa—Santa Claus. He fits the description to a tee.
"Hi, Santa!" said Miriam.
"That's just Uncle Ken. He's pretending. Isn't he funny?"
"Okay. Hi, Santa!" 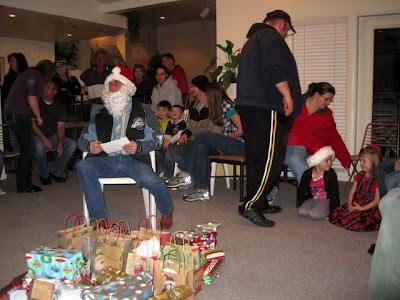 Uncle Ken had planned a whole present exchange game but someone forgot my grandpa's oxygen tank and he was slowly suffocating so instead of playing the game he invited the little cousins to deliver presents to everyone and then we all opened them on the count of three and then were granted permission to exchange them if we wanted. 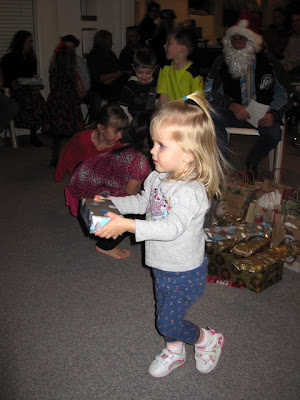 All the little elves, as Uncle Ken called them, were more than happy to help out. 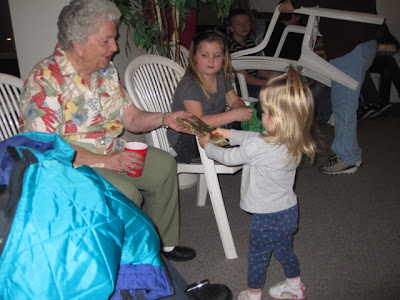 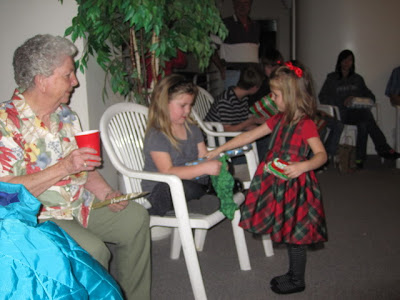 I realize it's time for my Grandpa to go. I also realize now that it really is any minute. However, it seemed a little cruel (and, uh, wrong) to allow him to suffocate at the family Christmas party just so we could play a silly game. I'm glad we sped through it and got him home to bed.

I'm also glad we sped through it so that my girls didn't have to try to play by all the rules. That would have been difficult.

Miriam traded some candy to Grandma Layton in exchange for a pack of crayons. She then stole Auntie Josie's candy, but Auntie Josie was cool about it and just chose an extra present and opened it. Rachel got a "Reindeer Pooper." You put jelly beans inside of it and then when you lift its tail it poops out the jelly beans. We can't get it to work but she's happy with it all the same because candy + toy = win.

I scored a sweet pair of toe socks. My very first pair. I've always been a little nervous about toe socks because I thought it would feel like having a toe wedgie between each of my toes. 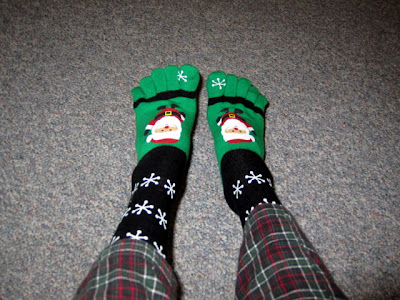 Truthfully, it kind of feels like there's a toe wedgie between each of my toes.
And, I lied, because I didn't only get my very first pair. I got my very first two pairs. Andrew opened up a pair of toe socks, too, and instead of trading them with anyone he just saved them for me. How sweet.
I'm still deciding whether or not I like them. Andrew thinks they're festive.
I was so proud of my girls for handling presents so well. Kelli had gotten some Polly Pocket Princess sets for her girls that she threw into the present exchange. They ended up with them because adults have a way of manipulating these things. Rachel and Miriam watched as their cousins opened their gifts.
"Oh, no!" I thought, sensing a tantrum.
I mean...pooping reindeer vs. Polly Pocket Princess?
"We're just watching Sabrina open her new toys," Rachel told me when I came to see how she was handling things. "Have you ever seen anything like this? It's very pretty. It looks like fun. I think Sabrina will enjoy it."
Ummmm...that's it?! You think Sabrina will enjoy it? You're not going to storm around demanding one for yourself? You're just going to be happy for her and choose to be happy about your own—obviously less interesting and less valuable—gift?
Score!
Sometimes I feel so proud of my children I could burst at the seams. This was one of those moments.
Growing up is good.
Posted by Nancy at 12:58 AM