So far this holiday has been a little blurry for me. On top of being tired and pregnant I was hit with a nasty head cold—so I was tired and pregnant and tired and sick and tired. That's a whole lot of tiredness. Luckily for me, Andrew is on semester break and even though he's worked every day this break, except for Sunday, he's taken over the majority of the children tending and clothes washing and dish washing and dinner cooking that I ordinarily do so that I can do other things like sleep...and not sneeze all over other people's food. It's been wonderfully relaxing and I'm just about better and we still have a good week left of his break, which means we can maybe have some fun, too!
I think we already had some fun, actually. I know Auntie Sarah came over on Friday to visit with Diana, who is staying at our place, and I know that we played a game together. I even remember that it was called "Rolling through the Ages" and that we played the bronze age. But come to think of it, that might have been Saturday morning that we did that. Ummmm...like I said: blur.
I know we played some other games with some other people—Gillespie people, mostly. I know that Steve was here with Jodie and their three kids and that Rachel has been spending most of her time at the Gillespie's playing with their six grandchildren and often leaving Miriam here, alone, wishing she was older so that she could go, too. Rachel's been loving it. Miriam's been loving it when all the kids come over here.
I know we had Asher over once so that his parents could finish up their Christmas shopping but I frankly don't remember if that was Christmas Adam or Christmas Eve.
On Christmas Eve we went to my parents' house for dinner and festivities. We chatted with Auntie Abra for a while—Miriam even sang her some Christmas songs—and then we had dinner. After dinner the girls were especially excited to act out the nativity.
Rachel wanted to be Mary. She chose a baby doll and wrapped it in swaddling clothes.
Miriam wanted to be Mary. She chose a baby doll and wrapped it in swaddling clothes. 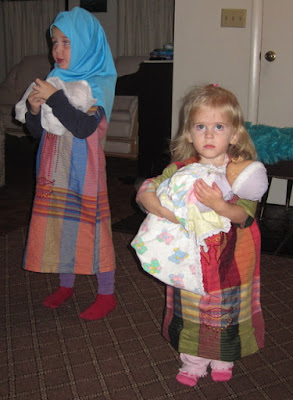 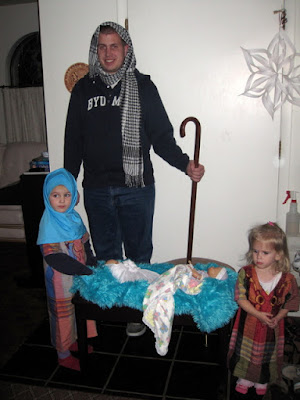 My mom and dad were shepherds—my mom put on her housecoat, which has a little lamb face in the corner, to be both her costume and prop, her cloak and flock. Josie was the angel. 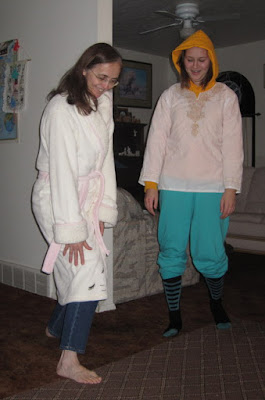 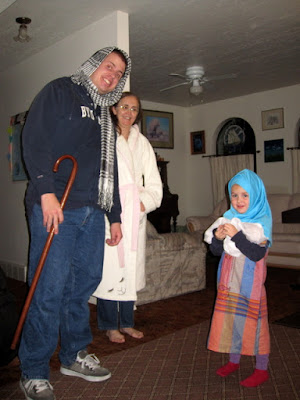 I was the wise men and brought gifts of frankincense, gold, and myrrh. 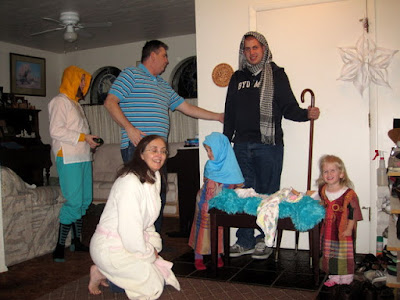 Patrick was the narrator and read the Christmas story from the Bible.
I think everyone had great fun putting it on and Rachel was thrilled that she accomplished the goal she set in primary. They had talked about preparing for the second coming and had each child write down a way that they could prepare for the second coming. Rachel's teacher had helped her to write, "I can prepare for the second coming by acting out the nativity scene on Christmas to remember the birth of Christ."
When we had finished, the girls got to open the gift my family got them: some beautiful dress-up dresses. The girls loved them and played in them so hard they almost completely ripped off the outer layer of their skirts so after we went home and the girls were in bed and we sat down to watch "It's a Wonderful Life," I sewed and sewed and sewed and now they're as good as new. Almost. 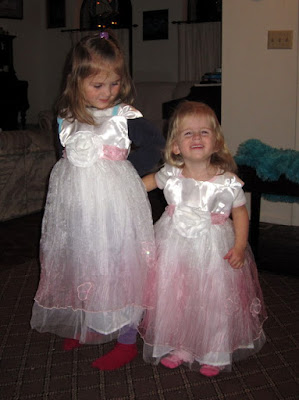 Before the girls went to bed they left out some milk and cookies for Santa and some carrots for his reindeer. Grandma set up the Bethlehem village in the fireplace this year and the girls were rather worried about Santa coming down the chimney—we're not supposed to touch the village and it certainly looked like Santa was doomed to plop down right in the middle of it. We told the girls he was more agile than they thought. 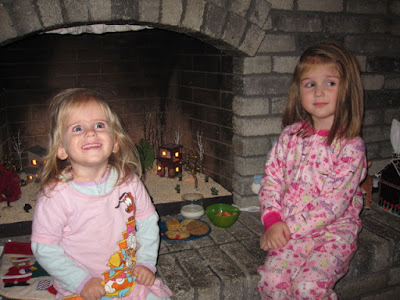 They were so excited but surprisingly fell asleep a lot sooner than I was expecting—as in, they fell asleep immediately. They saved staying awake all night for Christmas night—they got the whole thing backwards. Oh, well.
Posted by Nancy at 3:47 PM