A sweet couple in our ward will be adopting their first baby soon—they were selected a couple of months ago and the baby, a boy, is due the end of December. There's a baby shower for them tomorrow.
I made this bib, finally breaking open one of the books of patterns that Karen gave me for Christmas last year. I've been meaning to use them more; I've actually attempted a few projects but so far they've proven a little complicated for my amateur hands. I found this bib pattern—that was actually supposed to have a mouse on it—and it looked simple enough. 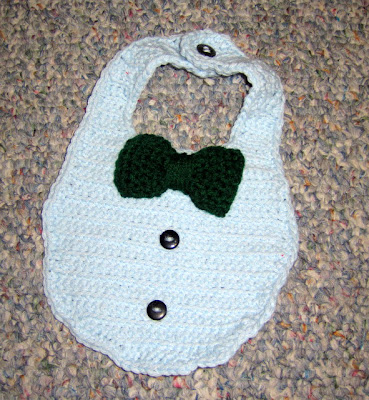 It wasn't terribly difficult but it still took me several hours to make because I kept having to unravel and re-crochet parts until they looked right. Or at least decent. Apparently it was a trickier pattern than I thought. Still...I finished it and I think it's kind of cute.
I don't have any boys so I don't know if this is something that's at all trendy or even if it's something that I'd put my child in. I sneaked into the girls' room to grab a teddy bear to model it and he looks pretty handsome in it, I think. 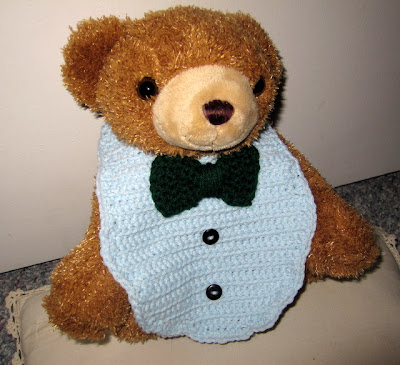