Today is my last day in Utah. Andrew and the girls left last Saturday and, after a tantrum-free road trip across the United States (And, no, I am not being sarcastic--no tantrums were thrown. And, yes, that's some kind of miracle), arrived in North Carolina on Tuesday. They started moving into our new house on Thursday.

Somehow, despite all the discussions we had about our moving plans, the girls forgot that our stuff was coming with us and were very excited when their favourite things started getting unpacked. I had a hunch this would happen because while we were packing they both (but mostly Miriam) would snatch things away and beg for it not to get packed. Then I would explain again that in order for this most-beloved thing to make it to North Carolina it would need to be packed up and put into the moving truck.

On Monday night I got a phone call from the girls before bed.

Rachel asked how Benjamin was doing. He was rather grumpy the first half of this week, probably due to the five shots he got last Thursday, in addition to having alingual frenectomy, and the stress of having everyone from his family disappear except for me. Whatever the cause of it, Benjamin was terribly grumpy, so I told Rachel this and then conjectured that it was because he missed her and Miriam.

"Well, Mom," Rachel ventured after taking a deep breath, as if she were suggesting something wild and crazy, "Maybe after we get to North Carolina you could come and visit for a while. And bring baby Benjamin, too...so that we can see him."

"I think I will do that," I told her, "only I'll probably just live with you guys instead of visit, okay?"

How did that girl miss out on that important detail?

Anyway, one of the first things the girls did when they arrived in North Carolina was explore the woods in the backyard of the house they were staying at (before they moved into our house). Andrew took pictures of them to send to me, so I took a picture of Benjamin in our front yard here to send to them there, and you know what? North Carolina is green! 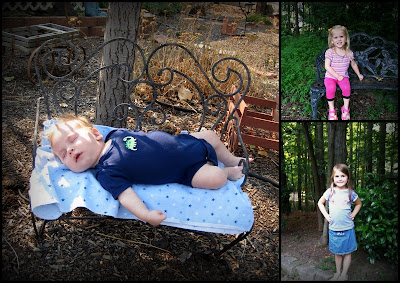