The Secret Garden: In Our Attic

Our new house is beautiful (and once we get moved in a little bit more I'll be glad to share some pictures with everyone who has been asking to see pictures) but it had one little drawback—there is no storage in this house! The closets are all tiny. It's not even advisable to walk in our "walk-in" closet in groups of more than one. Needless to say, we were at a loss about where to store our suitcases and our Christmas tree, among other things.

"It's beautiful!" he said, climbing down from the attic. "There's a huge platform up there where we can fit tons of stuff!"

Karen and I took turns peeking into the attic.

It was a beautiful solution to our too-much-stuff dilemma. The first thing I noticed, however, were the mice droppings. Eek. Still, space is space, even if there are mice. Plus, there are exterminators, right?

So Andrew and I spent this afternoon hauling stuff into the attic. Because I'm small and weak and unable to heft huge boxes over my head I was given the task of going into the attic and hauling the boxes onto the platform while Andrew pushed from the bottom. 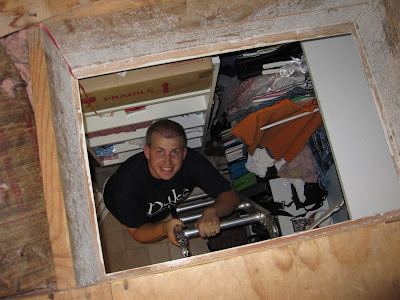 That meant I got to spend quite a bit of time looking around. 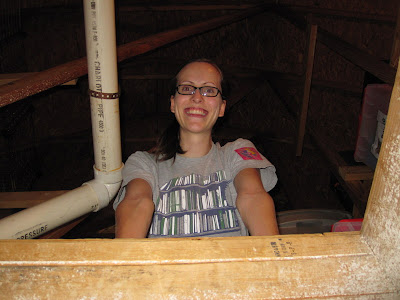 You know that iconic violin screeching from Psycho? Play that in your mind as you scroll through these pictures... 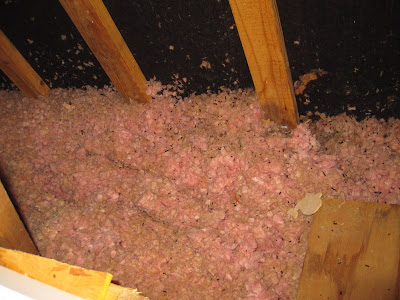 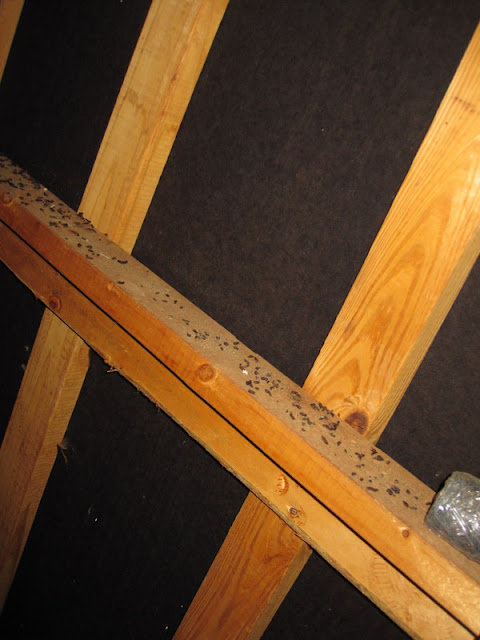 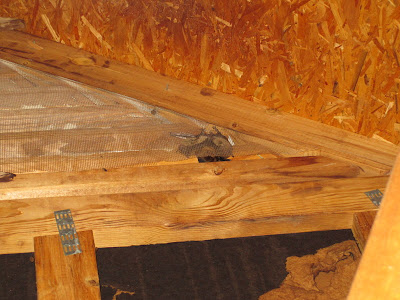 Obviously we have a bit of a problem with "roof mice" (though thankfully we have found no evidence of house mice) and obviously we'll be closing up that grate on the attic vent as soon as possible (if it weren't so darn high it'd be so much easier to do).

But at least we found a place to put all of this: 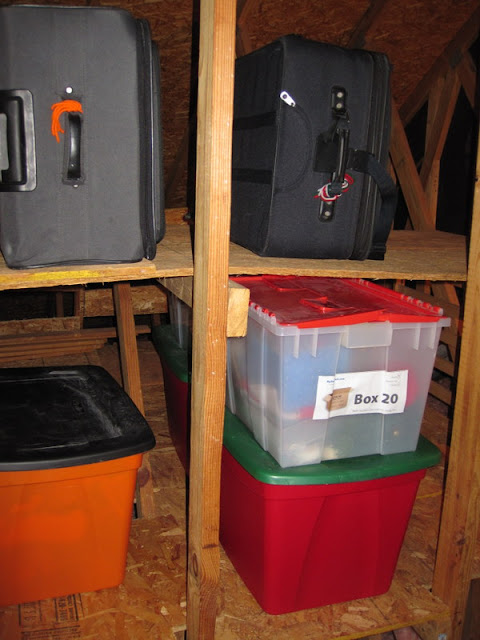 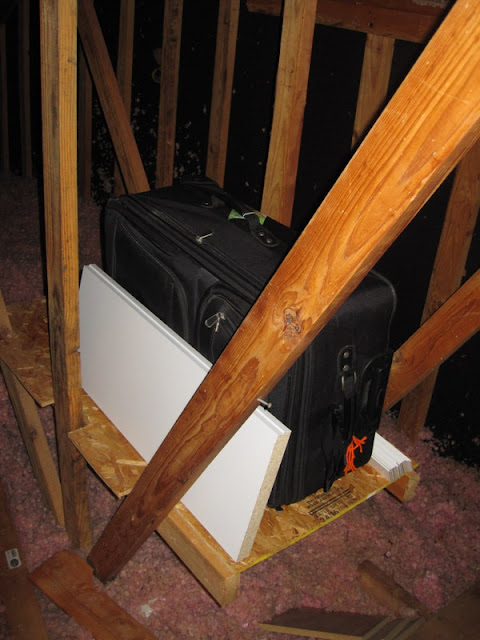 Andrew played a cute little joke on the girls (that I played a key role in). Rachel had watched a show while Miriam and Benjamin took naps and while Andrew and I moved stuff into the attic. When her show was over she wandered around following him while he worked.

"Want to see this box disappear?" I heard him ask her. "I just need to hold it up in the air and it gets pulled into the ceiling like magic!"

He lifted up a box and rested it on the top of the ladder and I reached down and pulled it onto the platform beside me.

"There's something in the attic that pulls it up for me," Andrew told her.

"Oh, come on—it's not that scary!" he said, pushing her under the hole to the attic.

I peeked down to look at her.

"Mom!" she said with surprise and relief. "You guys scared me!"

He did the same thing with Miriam when she woke up from her nap. She was much more scared of the trick than Rachel was. It was kind of funny, but only because it ended up being not scary at all.

Benjamin had woken up by the time we were finished and was screaming in his bed. Miriam and Rachel had brought the stools in from the bathroom and were peering into his bassinet, trying to cheer him up. I let them keep doing that while I scrubbed off and changed my clothes because...mice. Ew.

Our house feels so much less cluttered now! We're well on our way to being unpacked. With any luck I can have pictures of the house up by...next August. Getting settled takes forever. Moving was so much more fun when I was a kid and didn't have to deal with all this grown up stuff.
Posted by Nancy at 12:06 AM