It's April already. The year is 1/4 over. Can you believe it? Neither can I.

Today the girls got up and wanted to watch Angelina Ballerina. I let them because, hey—it's spring break! And also, I wanted to sleep. Unfortunately, I couldn't really fall back asleep so I got up and did some laundry and then started getting ready to go to the park.

Sometimes seemingly low-impact activities for children have a huge impact on my role as a mother, like going to the park at lunchtime. Pack lunch, pack bikes, pack baby, pack baby hud, load everything into the car, return to house to print out a map because the GPS won't work... There's so much behind-the-scenes work that mothers do to make simple things happen.

I drove all the way to the park—Little River Regional—by myself. The speed limit on that road is 55 MPH and, in case you were wondering, that's the fastest I've ever driven.

When I showed up at the park my friend Kathleen's eyes got all big and she asked, "Did you drive here all by yourself?! Way to go!"

Kathleen's got one of those personalities I could bask in all day long, exactly the way a cat curls up in the sunshine. She's always pleasant to be around: happy, energetic, and genuine. And she drives on the freeway all by herself. One day I want to be like her.

We had a great time at the park. Rachel knew that her friend Aubrey was going to be there and was thrilled that Grace and Emily and many others were there, too.

We were talking about book club and how May's book has a few naughty words in it but that we're keeping it as May's book and you can read it or not, when the kids returned, many taking swigs of mint-tainted diet Coke that was leftover from the eruptions.

"You guys aren't drinking that?!" Kim gasped. "Guys—I promise I didn't bring all this Coke planning on giving it to the kids! It's for the experiment. You guys—stop drinking that! I don't know about you but my kids were born caffeinated; they don't need to consume more!"

She seemed torn between explaining to the other moms that she didn't mean to be providing pop for all the kids and getting after the kids to stop drinking.

It was pretty funny. There we were, talking about naughty words in books while the kids were off drinking Coke in the woods. Talk about a risque afternoon. (See? I do sarcasm).

My girls, fortunately, weren't among the Coke drinkers (or they'd probably be up now), though they did enjoy watching the geysers. Kim got all the kids (both those that were "with" us as well as a couple of strangers) together to watch the big two-liter bottle reactions.

Here are the boys setting it up: 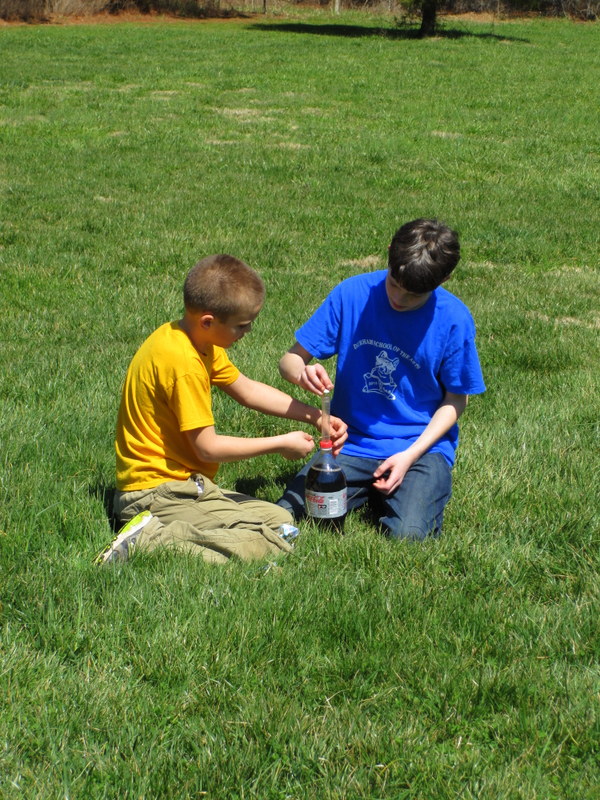 Backing away after pulling the pin: 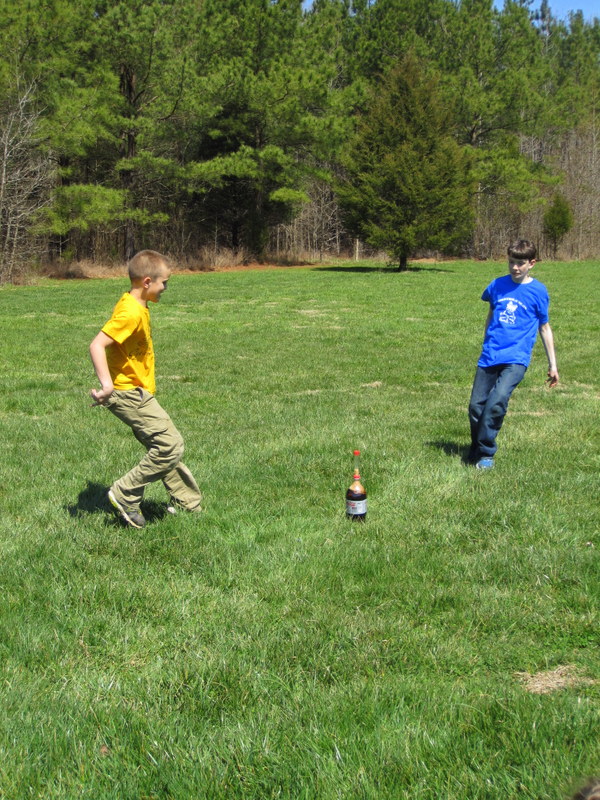 And thar she blows! 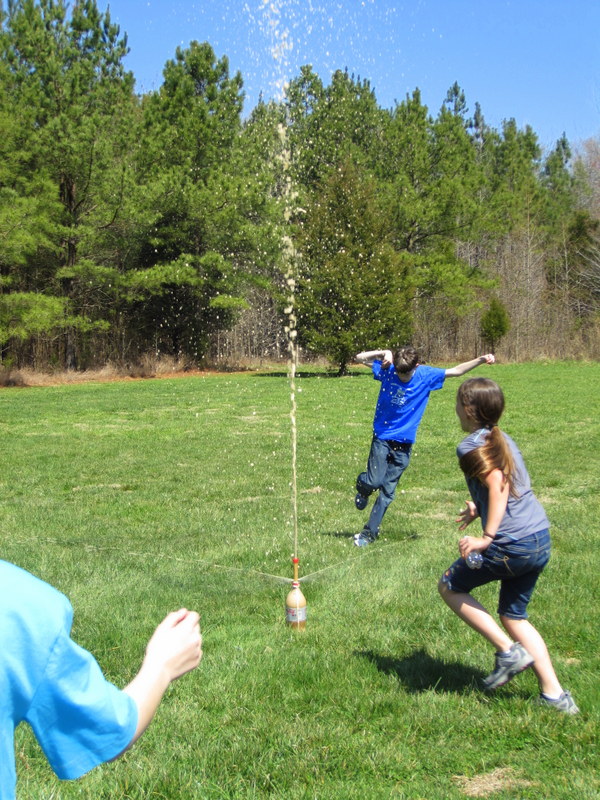 Then for some reason Ben grabbed the bottle and all the kids started chasing him around the field. Rachel's right in there with the best of them (Miriam was clinging to my leg instead). 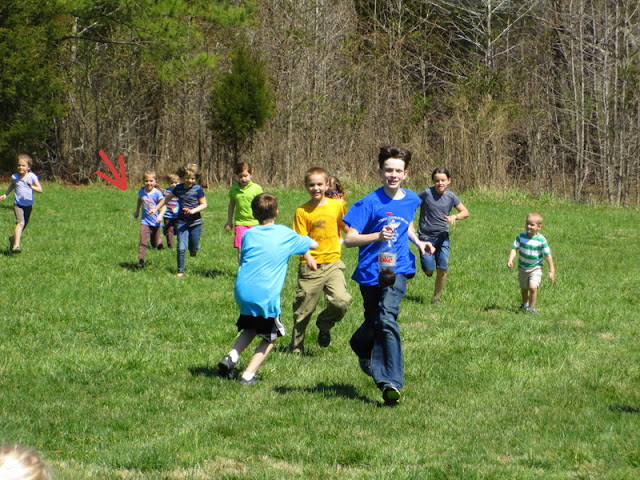 The second bottle tipped over so the geyser was kind of lame, but here's the third (and last) geyser: 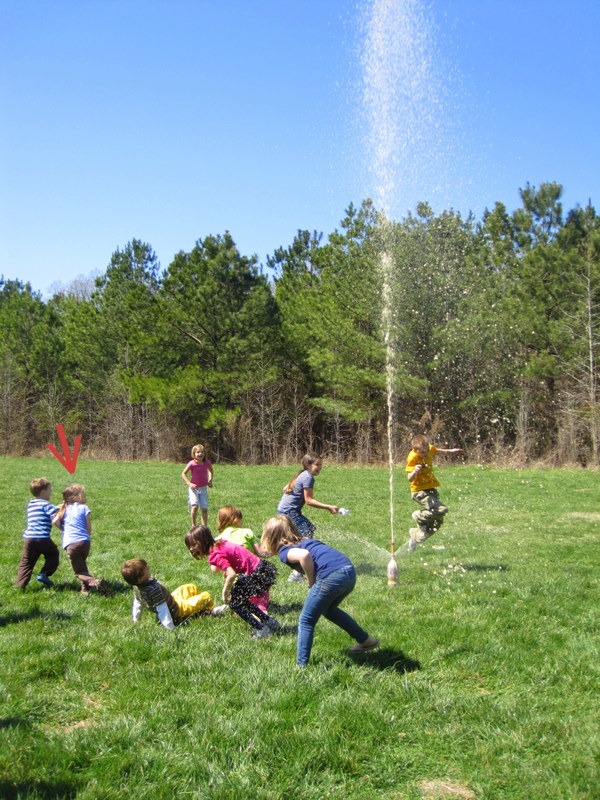 Some of those kids got pretty sticky. I'm rather surprised we didn't attract more bees than we did.

After a walk through the woods, we loaded up to go home. Some of the families had done some kid-exchanging, which Rachel desperately wanted to take part of. Unfortunately, I wasn't really up for driving twenty minutes to do the whole drop off/pick up thing, so I convinced her instead to play with Aubrey, who lives in our neighbourhood. Kim offered to take both Miriam and Rachel (since Miriam is friends with Aubrey's sister) for a while.

I drove the girls and Aubrey to Aubrey's house and left them there for a couple of hours. Benjamin took a nap and I gave the floors a good mopping and did some more laundry before picking the girls up again.

The girls had a wonderful time, playing in the sprinklers (or "spring culrs" as Rachel wrote in her journal), painting their nails, doing sidewalk chalk, and having a snack.

Apparently the girls had all been playing together when out of the blue Miriam came up to Kim and timidly asked for a snack. "Claire's mom?" she asked. "Can I have...ummmm...ummmm...chocolate pie?"

She gave the girls bagels with jam instead. The chocolate pie idea, it seems, was an effect of groupthink. The girls all agreed that chocolate pie would make a lovely snack (and elected Miriam to ask for it) without anyone voicing any concerns that the mother-figure would turn down their idea. There was no chocolate pie in stock, so bagels it was. Silly kids.

When I arrived to pick the girls up, they'd just come inside from drawing on the driveway and were all still wearing their swimsuits (or, in Rachel's and Miriam's cases, borrowed swimsuits). Claire had taken over the wii her brother had been playing and had evidently felt hampered by her bathing suit because when I walked through the living room to help pick up the stray shoes and clothes my children had left scattered across the floor, there was little Claire, wildly waving her arm around (playing Fruit Ninja) wearing absolutely nothing!

It was rather hilarious—oh, to be two and have no shame!

Once home, we went back outside. The girls blew bubbles to keep Benjamin happy while I switched the laundry. Andrew came home while we were back there and so I set him to work making dinner. I'd left potatoes boiling on the stove, the beginnings of homemade gnocchi (our first attempt). It wasn't as hard as we'd thought it was going to be but we certainly have room for improvement (the consistency was a little off). Miriam loved the whole process. She sat by Andrew, playing with the word gnocchi (a new word for her) and then she ate three or four helpings of it during dinner! 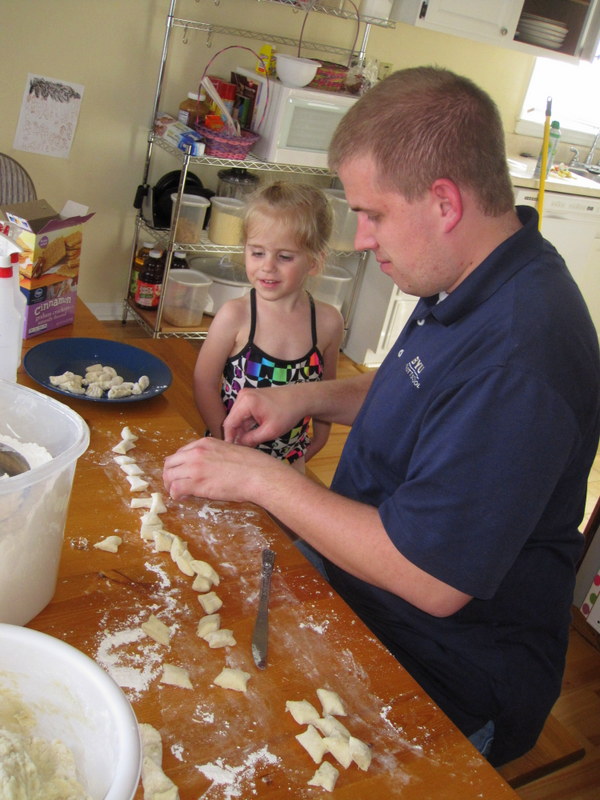 They were a little disappointed to find that no matter how hard they sucked, they couldn't get any juice to come through the straw. 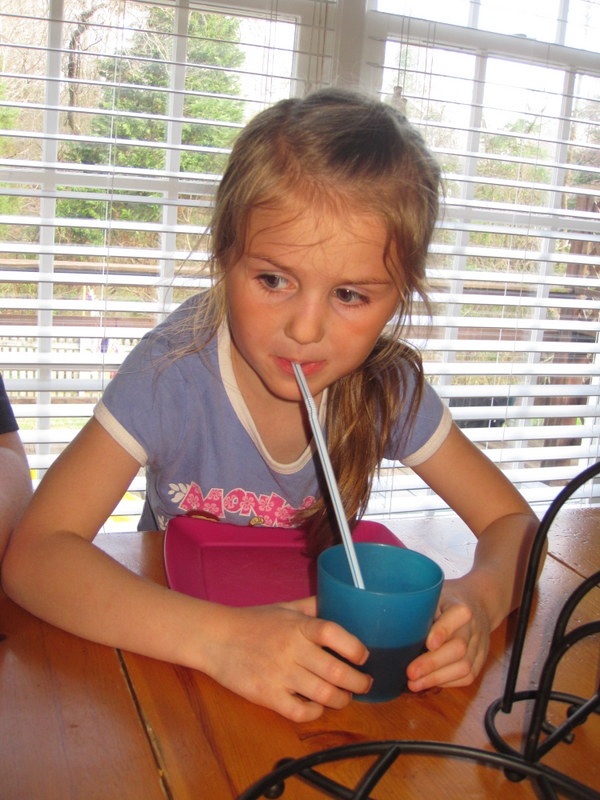 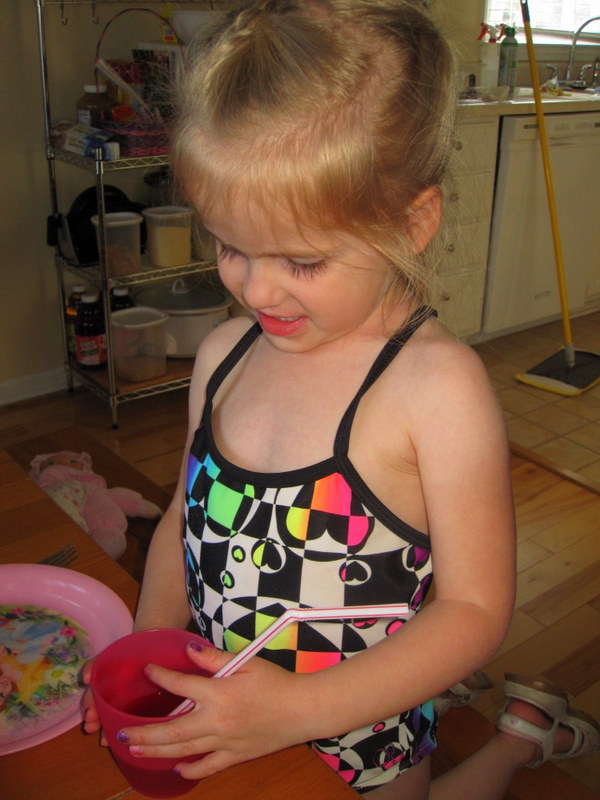 That's because it wasn't juice at all! It was jell-o! 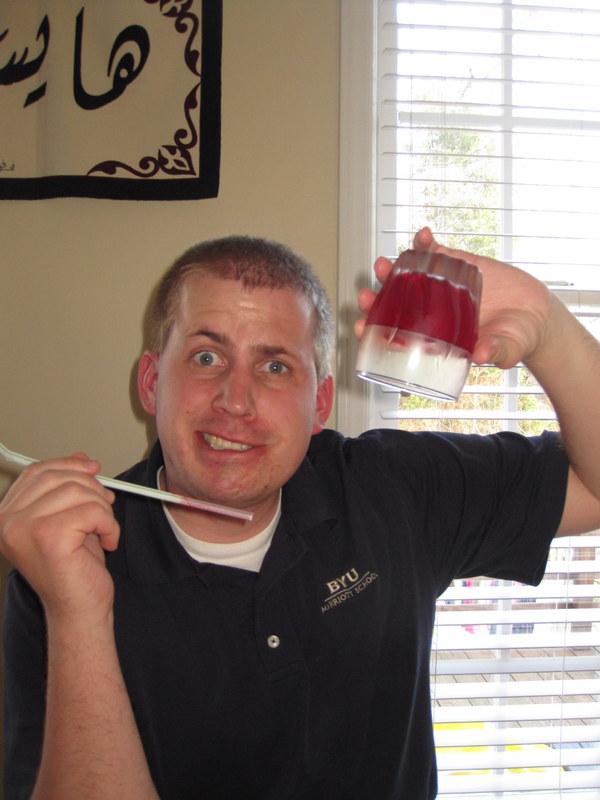 "What's that mean?" Rachel asked and so we introduced her to the wonderful tradition of April Fools' Day, emphasizing that we only do kind pranks in our family.

"I want to play a trick on someone!" she said.

"Well, maybe next year you'll think of something," I said. 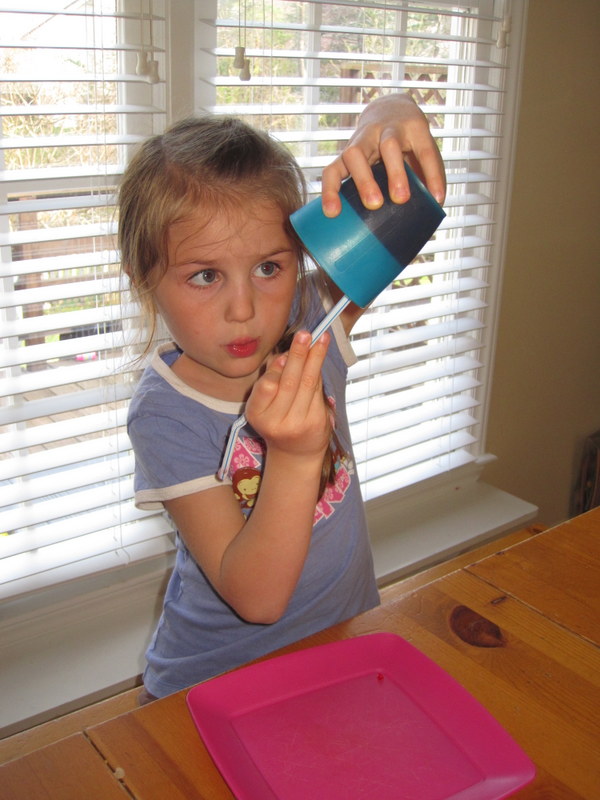 "April fools!" she cackled, rocking so hard with laughter that she nearly toppled off the bench.

"Your spoon!" she gasped out.

"I gave you a big one instead of a little one," she explained through continuous laughter.

"Oh, you did!" I said, affecting some laughter.

She'd given me a soup spoon instead of a teaspoon (our hand-me-down silverware stainless-steel-ware is just that fancy!). A sillier prank there never was!

For FHE was looked at our family tree on FamilySearch and discussed some of our ancestors. Then we threw huge fits about being asked to put on our pyjamas and missed out on story time because we were screaming and yelling and carrying on in such a ridiculous fashion. Then we cried in our beds because we felt so badly for saying so many mean things to our parents and for hitting our sisters and for missing story time and for being so exhausted from playing in the sun all day.

But over all, it was a wonderful day and a great way to herald in the month of April.
Posted by Nancy at 11:14 PM