Sleep is for the birds

Saturday night was a rough night—which is kind of par for the course at our house. Not only did a wrestle with getting Benjamin to sleep until 3:00 in the morning (he mastered the phoneme "ba" at approximately 1:30 and practiced it for a good hour and a half before drifting off into a restless sleep), Miriam got up in the middle of the night for something (which is super rare for her), and then Benjamin was up again just a while later, and then again a while later, and then I finally, finally had him settled down and Rachel got up to find breakfast for herself.

She settled on oatmeal. The problem with this was that the only thing she's ever made in the microwave has been quesadillas so she wasn't really sure how to cook the oatmeal (note to self: remind her that now that she can read she should read). She opened the packet and dumped it into a bowl and added some water and then put it in the microwave...for ten seconds.

The microwave beeped. She opened it to check her oatmeal, and lo! Her oatmeal wasn't finished.

"Rachel!" I called out as loudly as I could without endangering the fragile sleep Benjamin had just fallen into. She appeared in my doorway. "Just set the timer for one minute."

"One minute is sixty seconds. You can type one, zero, zero or you can type six, zero."

"Oh, no! I hit zero too many times! Reset, reset, reset...where are you?!" she muttered to herself/the reset button.

"Right next to the zero," I called out as loudly/softly as I could.

With the sounds of the microwave whirring, confident that my very capable child had really only typed one, zero, zero, I fell back to sleep so quickly it was like I had plummeted off a cliff or something. Unfortunately and evidently I was bungee jumping in my sleep because no sooner had I fallen asleep was I yanked back wide awake again.

"CARDINAL!" Rachel squealed, while jumping up and down at the foot of our bed. "Right on the deck!"

"What?" I croaked, squinting at her through my tired, tired eyelids.


Benjamin was wide awake by this time and was kicking his legs and pumping his arms and giggling and squirming at the sight of his sister.

She wisely made her exit and drew me a lovely picture of a cardinal. I grabbed my pillow and punched and screamed into it a couple dozen times before taking a deep breath and facing the day. I wanted to cry. If Andrew had been in the bed instead of in the shower I would have forced him out of bed to deal with our children who never sleep. Unfortunately, he wasn't in the bed but was in the shower.

The amount of sleep deprivation going on around here is fit-inducing, I kid you not. But truthfully, I think I'm handling it better this time (with Benjamin) than the first time around (with Rachel). Why can't every child of mine sleep like Miriam can?

At least this time around I get pretty pictures of very prolific cardinals to help cheer me up. This cardinal—who, from the colouring appears to be male (though I'm sure Rachel intended it to be a female)—has twelve visible eggs. I don't know how many it's sitting on... 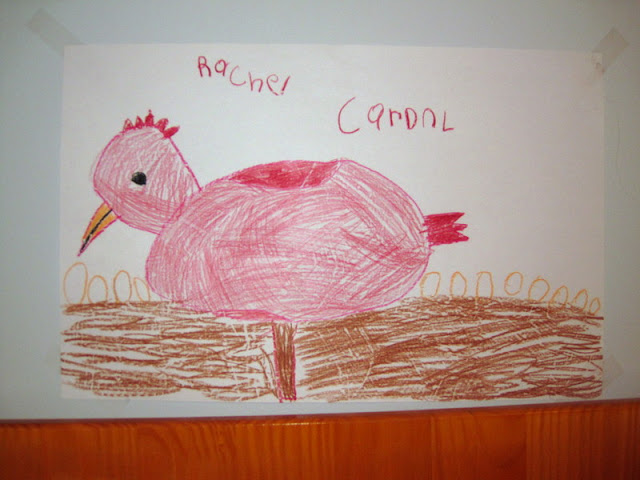 Because Rachel was drawing a picture of a bird, Miriam decided she needed to as well. She drew a crow. But I think it might have originally been a cardinal (since it was drawn in red and has a red head). Rachel labeled Miriam's picture for her. I think this crow might also be sitting on an egg (but just one). 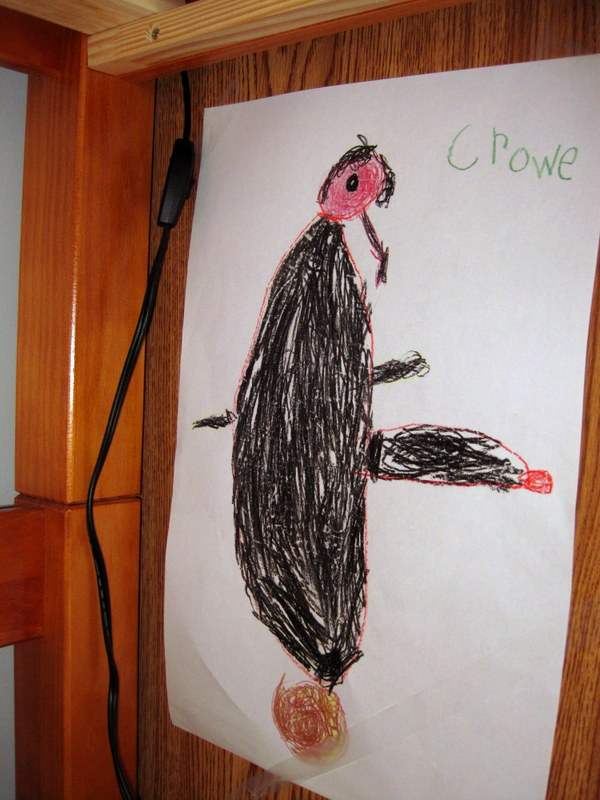 Miriam looked so sweet when she was ready for church. She found the little Book of Mormon that has been missing for a while and she was so excited about it she was glowing. I asked if I could take her picture, she consented and then proceeded to flash me the infamous Heiss is-this-a-smile face. 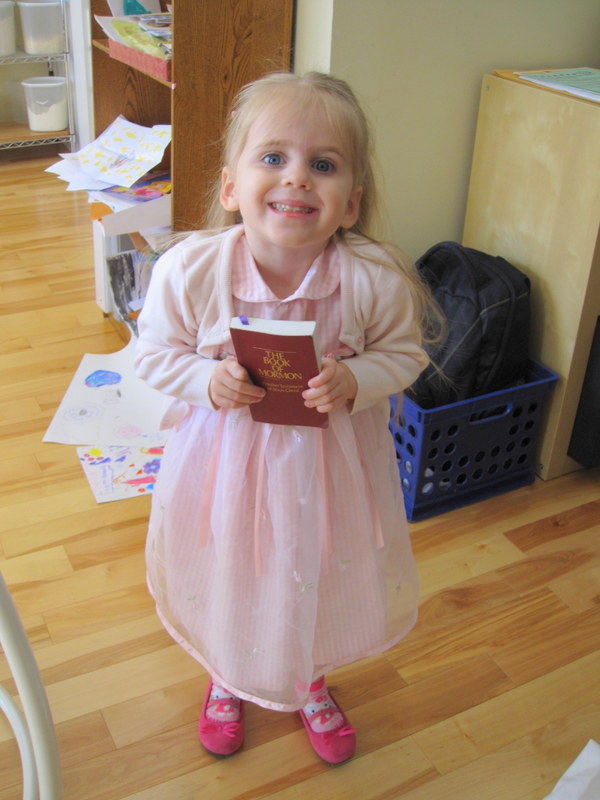 Instead her is-this-a-smile smile got worse. 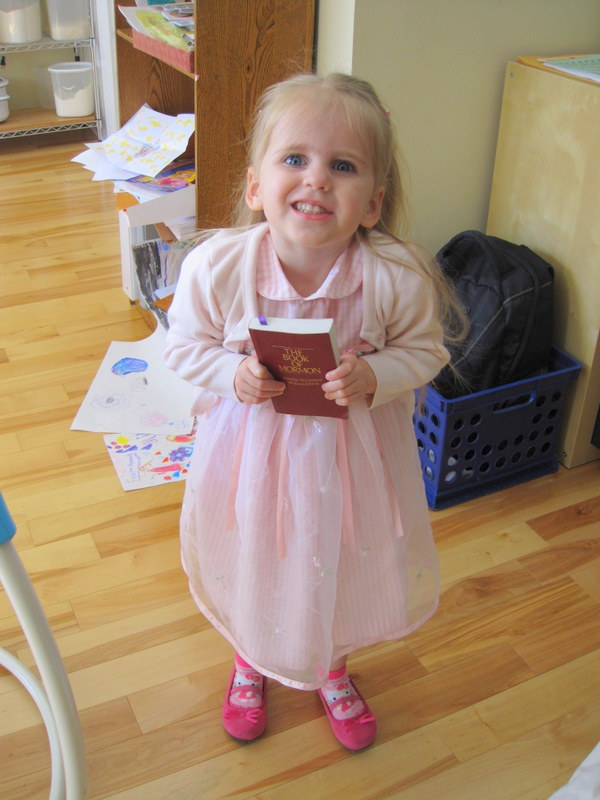 I got to have a nice chat with my friend Katie in the kitchen at church while we were cleaning up the Sunbeam snacks (we feed all three Sunbeams classes in addition to the nursery (and, actually, the CTR 5 class as well) because church falls inconveniently over lunchtime). She used to be in the primary presidency but just got released this Sunday and at our last presidency meeting she said that she wouldn't mind watching Benjamin for me while I went to the temple with Marian (the primary president) but then she had to cancel at the last minute. So she apologized for that, and then we got to talk about our babies who never, ever, ever sleep.

Hers are older now, but still a trial. But she got it. Every mother is sleep deprived but some mothers are more sleep deprived than others. How do I know this? Because my baby was awake for fifteen hours straight today (well, he took a half hour nap). He's sleeping now (because he's exhausted from the past couple of weeks where he's only been sleeping about four hours a day...total) but only because he's lying on my chest and I'm leaned way back in my recliner. Unfortunately...I can't sleep like this, so eventually I'll have to move and then he won't sleep as well because chances are the change in position will make his reflux worse and...yup.

But eventually it gets better. It was just nice to talk to someone who understood and who didn't offer any advice because there isn't any to be had. Sleep training books are more useful for teething toys at this house. Miriam just sleeps. Benjamin and Rachel just don't. They were made that way.

Fortunately, I'm married to the best man ever and after church he put Benjamin and me to bed (where I wrestled with Benjamin for over half an hour to get him to close his eyes and go to sleep) and we napped for two and half hours (well, two, if you take out the wrestling part) while Andrew entertained Rachel and Miriam and made dinner. Those two hours were the most precious block of sleep I'd had in days.

Even though the no-sleep thing is killing me right now, I do believe it will get better. Benjamin isn't quite as bad as Rachel and he's got a sleep cycle of sorts. He's more of a few weeks on, few weeks off sort of guy.

And here's a picture Rachel drew of Andrew and me getting married (at the temple): 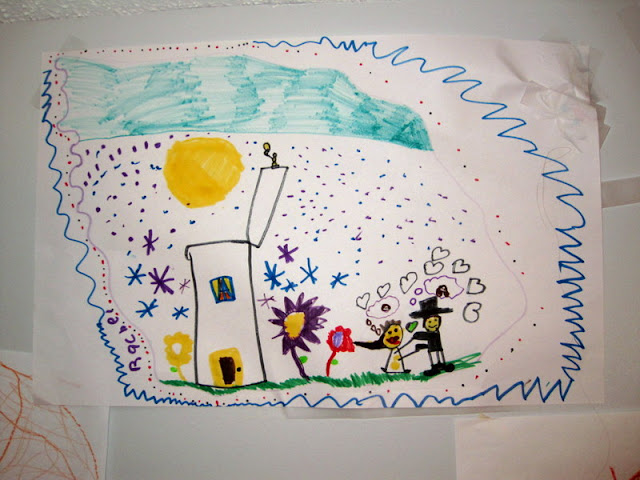