How does your garden grow?

It's possible I haven't looked at my garden for a week. I haven't touched it for at least three weeks. But don't worry—the deer have really got my back and are trying to keep the growth under control. Sadly they are really bad at distinguishing between plants I don't want in there from plants that I do. They ate every single top of my poor little sunflowers. Every single one. There's like twenty sad little sunflower stalks in my garden. That's apparently what I get for so cleverly covering the strawberries. But the deer stayed out of the strawberries this year, so...yay. 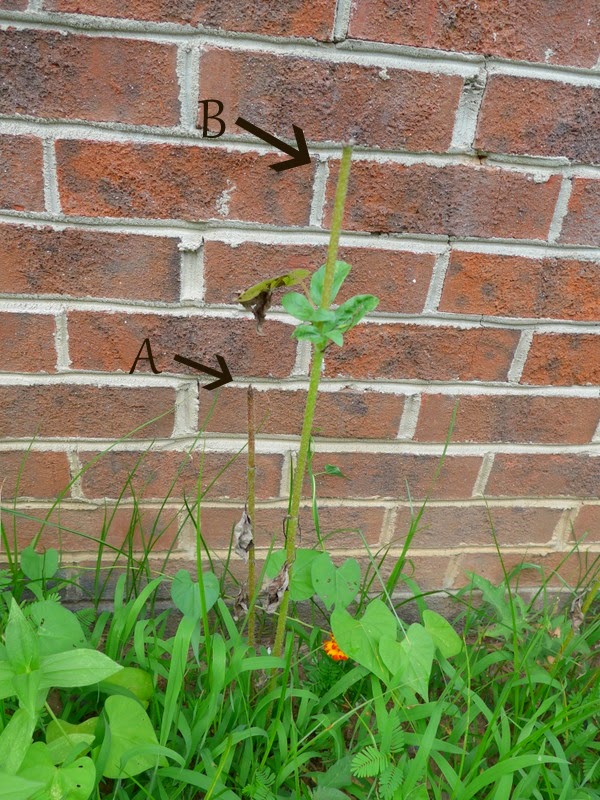 Three weeks is plenty of neglect anyway, but when you factor in enough rainfall things get downright jungly: 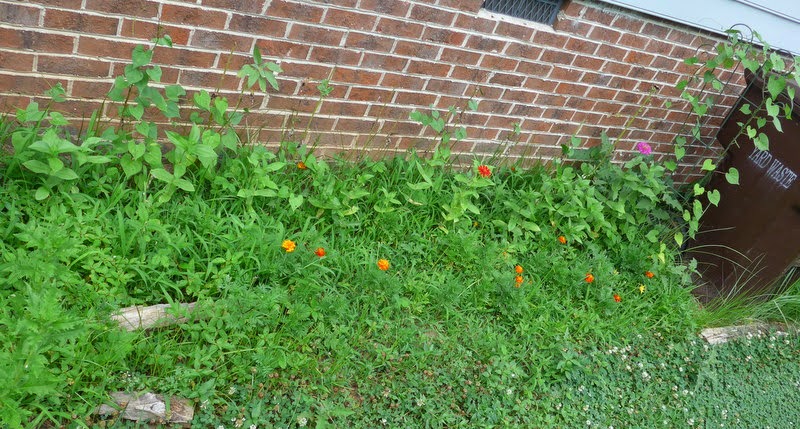 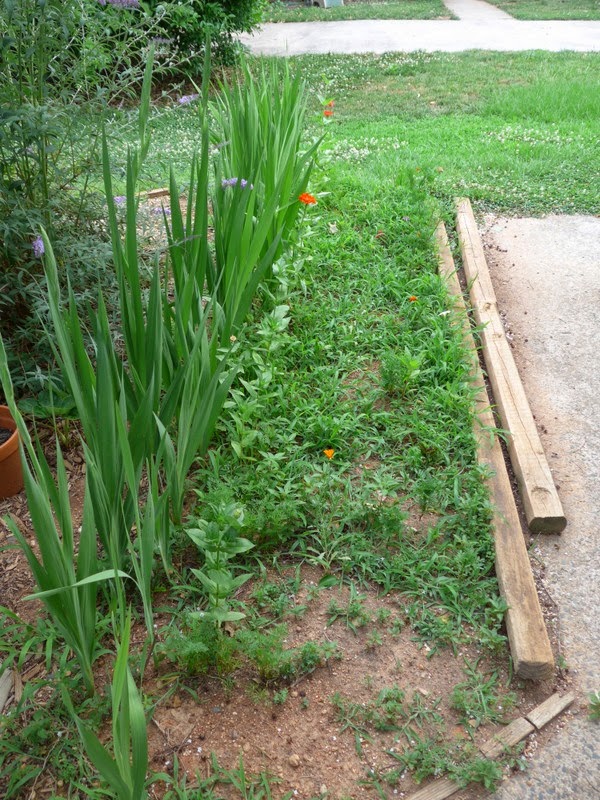 The good news is that all the crabgrass seems to have provided enough protection from the sun for my little petunias to decide to sprout (I thought they just weren't going to) and now I have sweet little blossoms poking up from below the grass (which you can't see in the picture, no, because you kind of have to hunt for them). I tried weeding around them a bit so they don't choke and die but then I gave up. I'll save weeding for another day.

But my zinnias are blooming! I chose a shorter variety this year (every single seed was eaten by yellow finches last year so I bought an entirely new seed pack) and the kids are rather unimpressed.

"Aren't they going to get taller?" both girls asked wryly.

We'll probably go back to the taller variety next year.

Rachel's excited that two of the daisies we planted are growing in the front garden (I know—two whole plants out of however many we planted). And this little beauty decided the soil by the mailbox was, in fact, fertile ground: 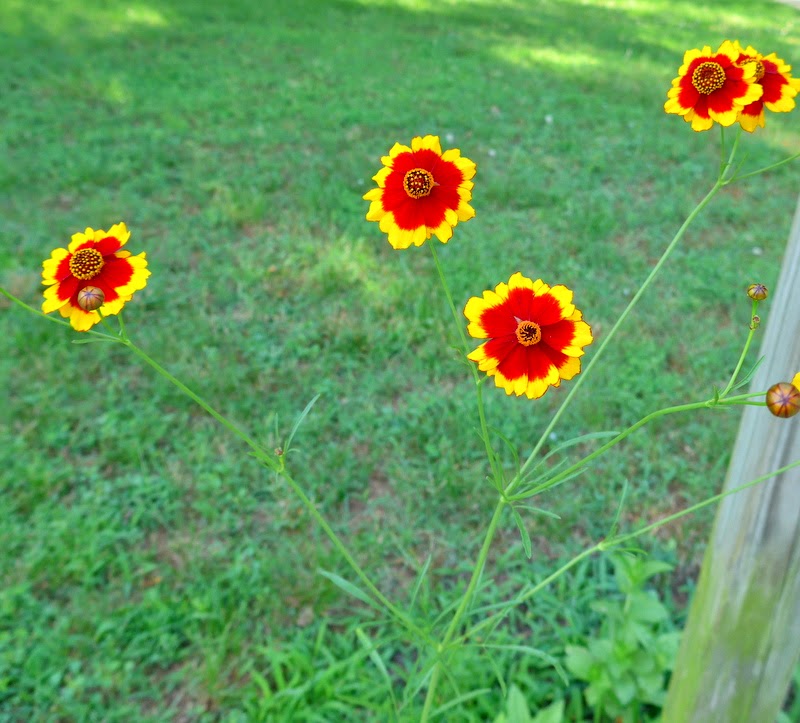 It's nearly four feet tall. And is accompanied by a couple of 12-inch zinnias (that have yet to blossom) and one marigold (out of however many we planted (so many)).

Basically, this year's garden is...a toss up. I'm not quite ready to call it a success but I'm also not ready to write it off as a failure.

I haven't even checked on the vegetable garden yet. Who knows what's going on back there? But the tomato plants on my deck are blooming so there will be tomatoes!

Rachel tried helping me weed for a while (not that I weeded very long anyway) but she gave up when she realized she had no idea what she was doing.

"Yes—that's clover. Pull all the clover you want. That's not clover. That's a daisy. You specifically asked for daisies so you'd better not pull it out."

"I know what it is! It's wild strawberry!"

I'm not incredibly patient when I don't feel well, but I don't think I'm particularly crabby (not particularly). Anyway, around the time Rachel mentioned wild strawberries Benjamin said, "Stawbayee? Stawbayee!" and toddled off to the backyard. He came back with...drumroll...a wild strawberry. 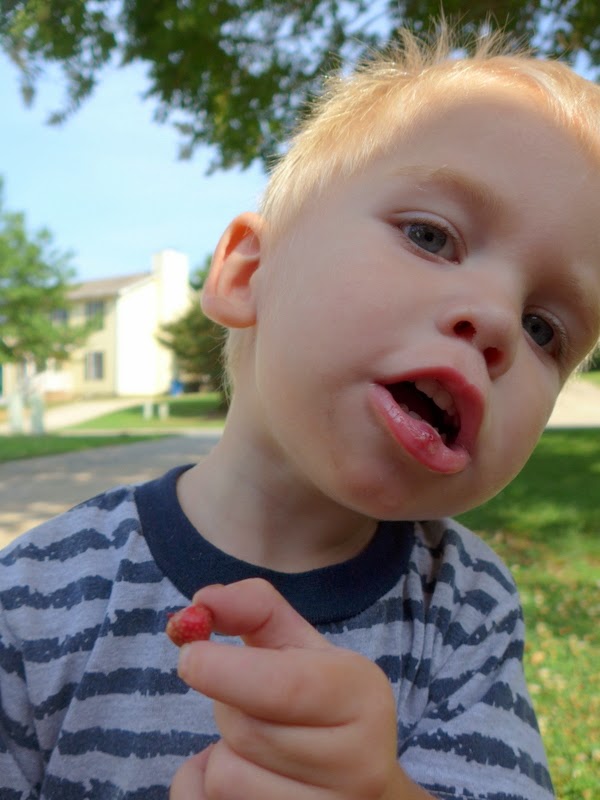 Remember last year when I flipped out and identified everything growing in our backyard because this little boy simply cannot not put things in his mouth? Apparently he found the wild strawberry patch. A long time ago. I'm just happy I've known for over a year that they aren't poisonous.

And now you're perhaps wondering about his lip. And if you weren't before you are now.

He came home yesterday around 5:00, dripping wet in a borrowed swimsuit. Laura was in a hurry so I just ripped the trunks off him, thanked her, and sent her on her way. Then I noticed his face and shirt.

"You are covered in red juice!" I said. "Did you get a popsicle?"

"Mmmm. Es. Ummy! Ummy!" said Benjamin, who can't pronounce /y/ to save his skin (so he just leaves it off).

"Well, aren't you a lucky boy? Let's just peel your shirt off and put some spray'n'wash on it and then get you into something warm and dry, okay?" I prattled (he'd gone swimming in his shirt so it was cold and wet).

I knelt down to maneuver his wet shirt off his little body and that's when I first got a good look at his face (I still wasn't quite opening my eyes yesterday, okay?).

"Oh! That's not popsicle juice!" I said. "Your lip is bleeding! Did you get a bonk?"

He's so agreeable about everything and rarely offers an explanation unaided so I was left wondering the truth until Marian came by to drop Rachel off an hour later. Turns out he had a bonk (no grown up saw him do it but he went up to Laura quite upset about it...but then recovered quickly, so no big deal) and then later some watermelon (which was what was dripping down his face and all over his shirt).

"Benjamin!" Andrew and I hissed in unison.

"'Kay," he said, like, "I knew that probably wasn't a good idea before I did it but I wasn't quite sure, but okay. Okay. I will put that in the naughty column, sure. I can do that. Okay."

The best, though, is asking him an ice-breaker question:

"Benjamin, how old are you?"

He'll just spit out random words that he's pretty sure should be the answer to one-of-those-questions-people-ask-a-lot: "Good. Green. No. Two. Es. 'Kay."

And, here's what the kids did this morning before it was "too hot" to play outside (which is also what they did last night when it was cool enough to play outside): 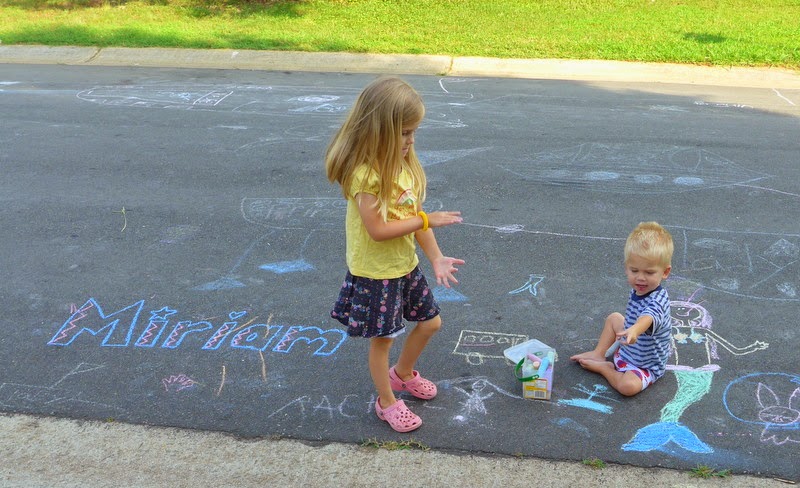 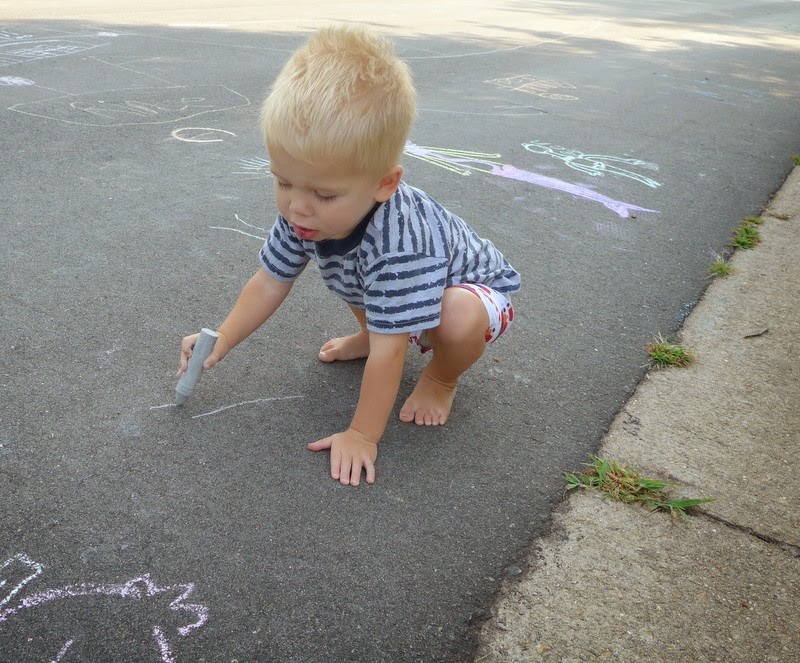 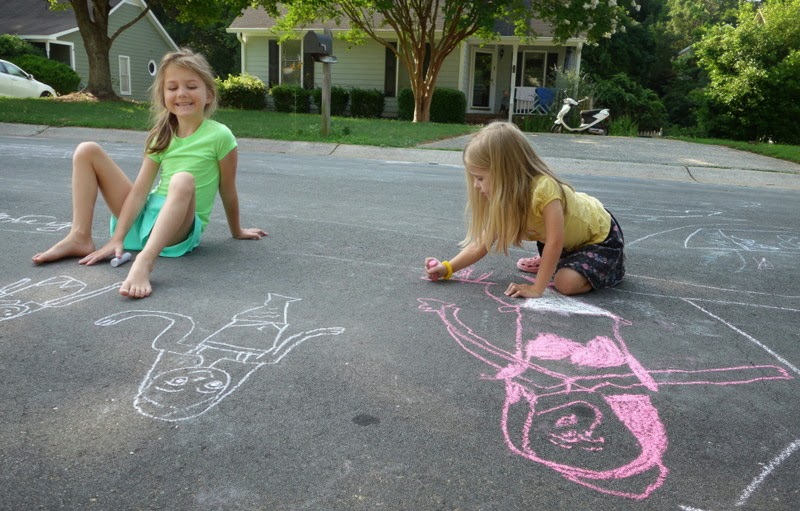