On Thursday we went in to help with the end-of-year party. We stayed nearly the whole day because we just couldn't get away. Miriam loves going to school and when it's pizza party to recess to popsicles on the playground, well, she loves it even more. I was exhausted by the afternoon and happily bid Rachel's teachers a good summer.

"But you're coming back tomorrow, aren't you?" asked Mrs. M.

Yesterday we showed up for the last hour of school. The kids weren't doing much other than cleaning out their desks and enjoying their "centers" for one last time, but we also got some story time and chick time in—lots of chick time (which meant lots of hand washing so I'm a little surprised by this pink eye—what?!). Catching Rachel without one chick or another in her hands was a rare thing. 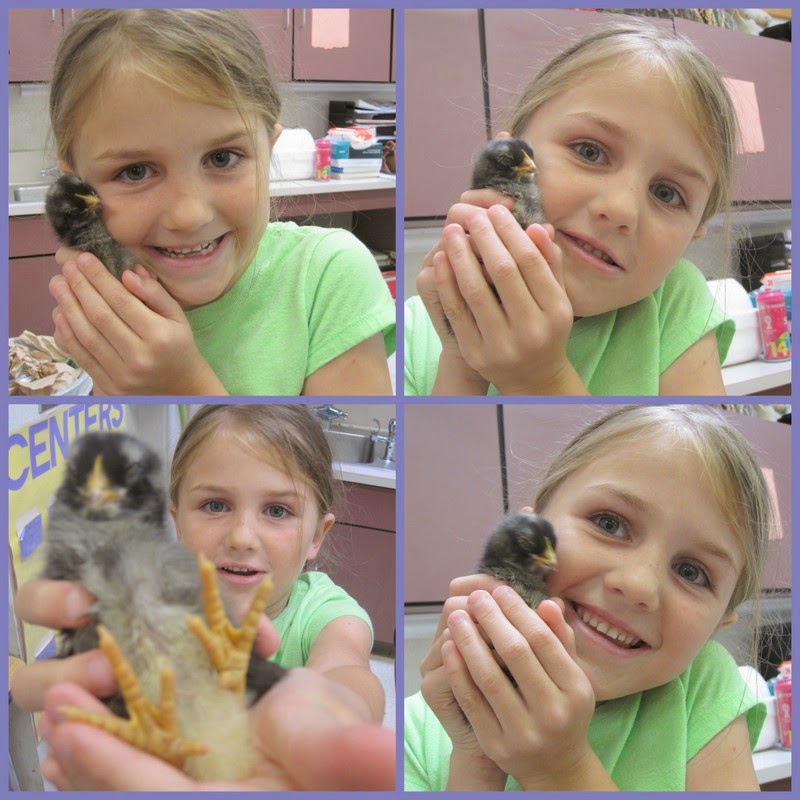 She's been begging to bring one home as a pet for weeks.

Anyway, here are a few pictures of the kids saying goodbye to Rachel's classroom. It certainly was a wonderful year! 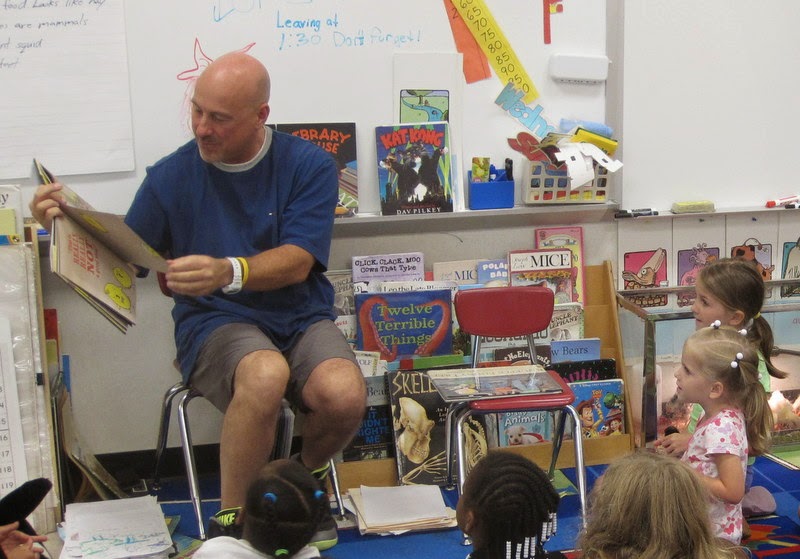 I think we'll all have some fond memories of this classroom for years to come (except, perhaps, for Benjamin, who will forget about it by next week). At the beginning of last year we got a phone call from my friend Becky, who was the PTA vice-president this year. She'd gotten a sneak peek at the class lists and called to tell me that we "really won the lottery!"

We'd gotten into the most coveted class of the school. Everyone wants to be in Mr. A.'s class.

I wondered to myself how great it could possibly be. The answer to that is phenomenally great.

Mr. A. knows every child in the entire school by name. Having no children of his own, he keeps up with his students through the years. Just the other day he showed me a picture of one of his little first-graders, who is now a junior at Duke (and on the basketball team, if I'm not mistaken). He was so proud of her—he held up a wallet-sized photo of her in grade one and a bigger picture of her in a Duke jersey as he raved about how well she's done.

A group of students in grade five filed through his classroom to say goodbye. He hugged them all and wished them well and told them to come visit.

At the beginning of the year we had a parent meeting where Mr. A. promised to never raise his voice, to instill confidence in the children, and to help them make great strides in reading and writing and math. But, he said, he didn't really care how they did in grade one. He was more concerned with how they did in college and beyond. He wanted to prepare them for that.

I wondered to myself how that was even possible. But now I know.

These kids love Mr. A. and he loves them all. They come back to him for years to show him what they've accomplished. His wall is plastered with pictures from children, and cards from grown children, thanking him for his influence. I think he somehow becomes the voice of their conscience. Somehow his constant, gentle encouragement gets embedded in their brains and they keep hearing it for years to come.

I have no doubt in my mind that we really won the lottery. I'm sure next year will be great but it will have a hard time eclipsing this year, so we'll just tuck this year safely into our memory and, like hundreds and hundreds of families before us, will cherish it for years to come.
Posted by Nancy at 9:27 AM