We've been doing a lot of swimming again now that we're all mostly back to health. Our neighbourhood had the "opening social" for the pool (only a month after it opened) so suddenly there were a lot more toys to enjoy, including this orca (that Benjamin insists is a shark).

Here's Rachel and her friend Ashley enjoying a ride after swimming lessons one morning:

The girls put it close to the edge of the pool and then jump on it because it's otherwise mostly impossible to get on. It's even more impossible to stay on once you're on, though Benjamin can stay on for quite a while since he only ever rides it with parental support.

We went back to the pool this evening and I remembered to bring the camera and an extra adult so that I could snap a picture of this boy riding his shark. He loves it so much! 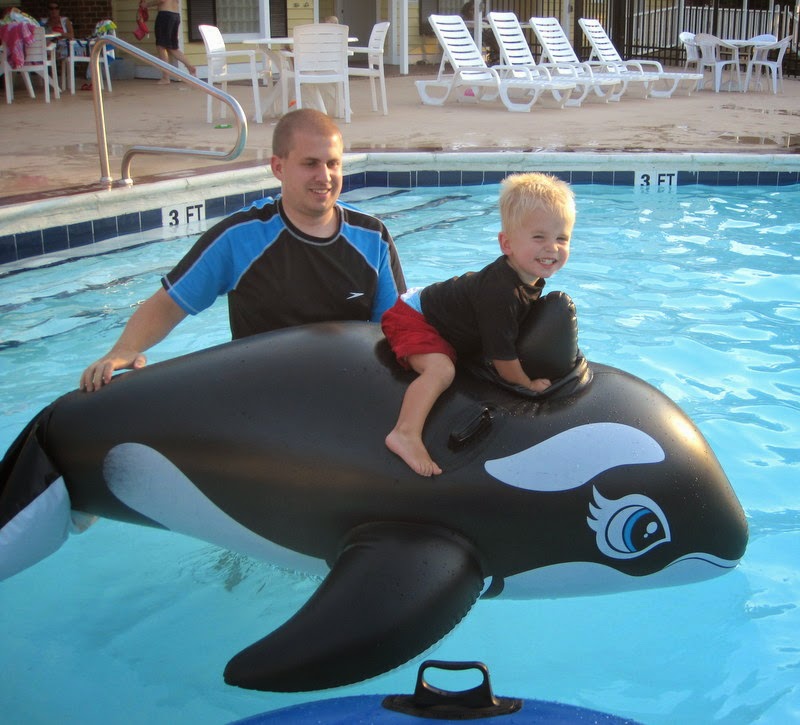 And then he'll scream, "Nooo! SHARK!"

"A doh," he'll answer, his o slightly r-coloured (like how it sounds when you say "do...rsal fin"), pointing to the dorsal fin. He's been a bit obsessed with sharks lately. But not enough to tell them apart from killer whales.

And then I'll tell him again that I think it's a whale just to hear him scream, "SHARK!" 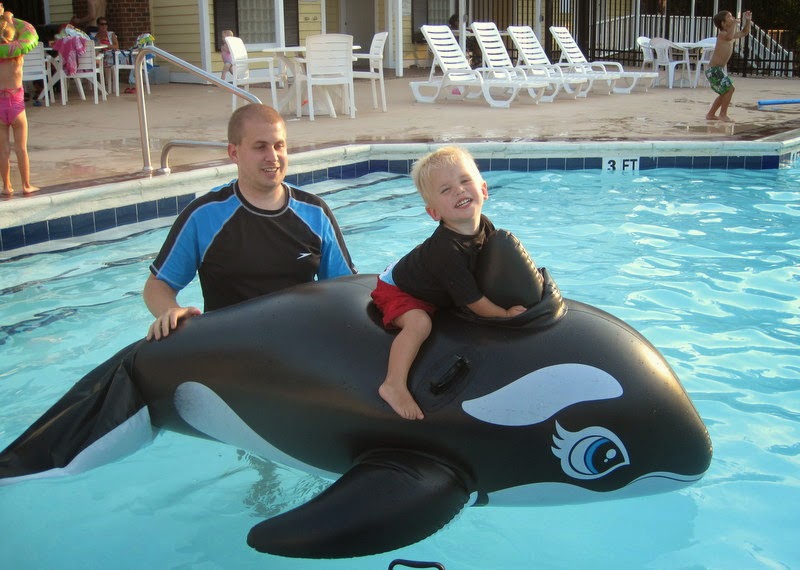 Here's Daddy being rather brave and letting go of Benjamin: 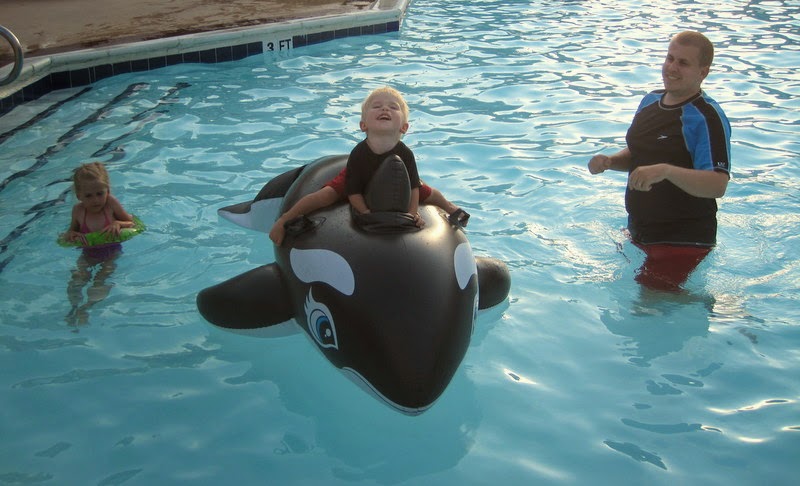 Benjamin has also been experimenting with the Puddle Jumper that we have, which he calls "shoaty" because sh- is far easier to say than fl- apparently. He likes to shoat in his shoaty when we go shimming. It took him a little while to learn to keep his balance but he can now flip from his front to his back and even paddle around a little bit.

Unfortunately, we bought a rather girlie floaty this year.

We were in Costco and I saw Puddle Jumpers on sale for cheaper than I've seen them anywhere else so we decided to get one for Miriam, who at the time was still crying about having to even put her foot in the pool. She, of course, wanted a pink one.

"What about this green one?" I asked, trying to steer her toward a gender-neutral one.

"How about purple?" I asked.

I convinced Andrew that purple was like...faded blue. And then I had to convince Miriam that it was faded blue...with a lot of pink mixed in! I think it ended up being a fine compromise. Wearing the purple floaty hasn't been too traumatic for anybody.

Technically Benjamin's not even big enough for it—another ten pounds to go—but if he's following in Miriam's footsteps (which he seems to be) he won't be heavy enough for it for another two years! He'll probably be swimming on his own by then. Until then, I'm happy to have a floaty in a colour Miriam will wear so she can be safer at the beach and I'm happy it's a colour that Benjamin doesn't mind (not that he minds pink either) so he can wear it in swimming seasons to come.
Posted by Nancy at 10:32 PM