This end of our week was rather eventful, starting on Thursday and continuing through the weekend. I spent the morning practicing the ukulele for the Relief Society Christmas party. We didn't volunteer to play this time since we'd already volunteered to play at the ward Christmas party (and how much ukulele can one audience take, really?) but then we were asked to play so we said we would.

Unfortunately, since we didn't volunteer early all the songs that we'd been practicing had already been nabbed by other performers. Not even kidding. That's what we get for being recruited three days before the party.

This wasn't a huge problem for a seasoned ukuleleist, such as myself (*blows on fingertips, rubs on shirt*), but it was kind of a shock for the freshly minted ukuleleists in the group. I did my best to find songs that they'd be comfortable playing—because, let's face it, I'm not exactly an expert either—scrutinizing chords and simplifying arrangements I'd found online. We were all pretty stressed about getting things to a playable level for us all (because practicing at home is one thing and playing in front of an audience is another) and in the end we did alright.

We played Away in a Manger (tune by James Murray, which we hadn't played before), Christmas Bells (in the key of F, ignoring that surly B-flat), and Holly Jolly Christmas (we all played the verses; not everyone played the bridge (it was a little tricky)). Rachel and Miriam played handbells during Christmas Bells but other than that we let the children off the hook for this performance. I was having to give pep talks to the adults; had we involved the children I think they would have had a mutiny.

In the end things went smoothly enough and we've rededicated ourselves to preparing for next weekend when we'll perform—with the children—at the ward party as well as a couple of nursing homes.

On Friday I found a loft bed for Rachel so Andrew took the van to campus to take care of some things and then went to pick up the bed while Benjamin and I made a spot for it. We moved his little toddler bed out of the room (and washed the wall by his bed because yikes), then we shifted the furniture along the walls to make room for the loft bed since there was only one wall in the room that it would fit against. We washed walls as we went because, at that point, why not?

Andrew came home shortly before I had to leave to pick the girls up from school so we could go to ukulele practice. While we were gone Andrew put the bed together.

We had three very excited children when we explained their new sleeping arrangements: Benjamin on the bottom bunk, Miriam on the top bunk, Rachel on the loft bed, Zoë eventually in her crib.

Her crib has been far too dangerous of a place while room sharing with Benjamin. 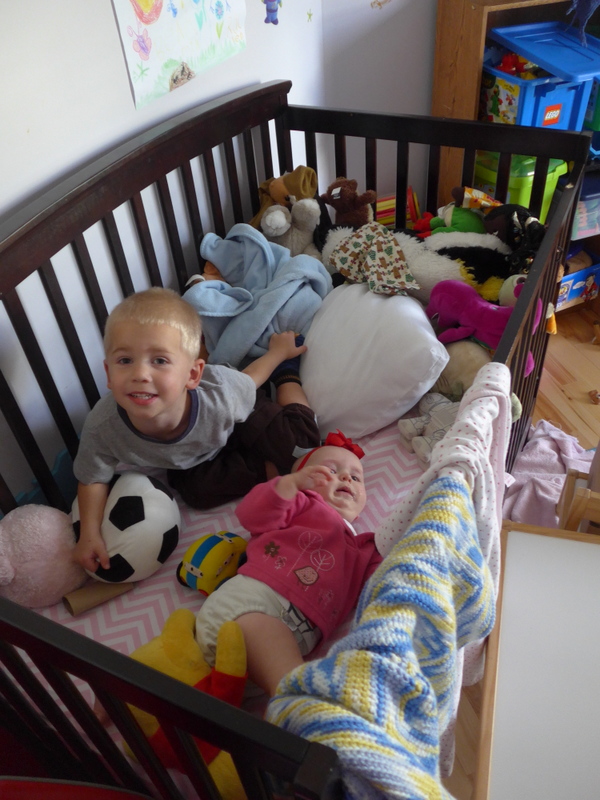 Now her crib is much safer and our little upcoming preteen is very happy with her new room. We even put one of her bookshelves in the TARDIS so she's quite satisfied. Obviously we're still working on organizing it but, like every room in my house, that task is likely to never get finished. 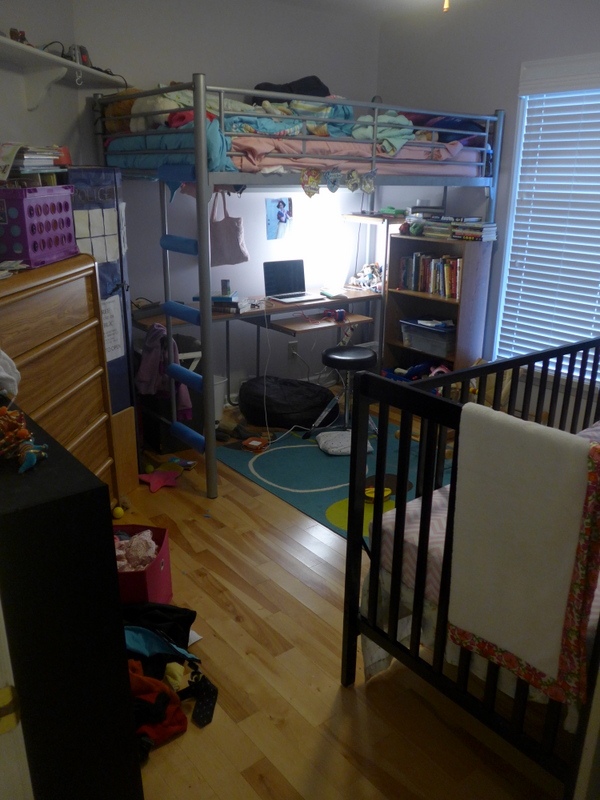 Zoë has spent a few hours sleeping in her crib. I put her down there initially and then bring her back in bed with us when she wakes up to nurse (yes, I still nurse her at night and, if she's anything like her siblings, I'll probably keep doing that until she's two...not joking). The first night she woke up screaming but on my way to her room she stopped crying, so I tiptoed back to my room, to afraid to even check on her in case she wasn't quite asleep but had decided she'd be alright on her own. But just as I reached my bed she started howling again, so I started back to her room and was startled when I ran into Rachel in the hallway. Zoë had woken her up, she grumbled on her way to the bathroom. I apologized for Zoë's terrible nighttime behaviour and then went to pick Zoë up.

I was quite shocked to find her sitting up!

"What!?" I said. "How are you sitting up?! You can't get into a sitting position by yourself, can you?!"

"No," Rachel said. "I picked her up and bounced her for awhile but she just kept crying so I put her back in her crib."

"Well, no wonder she's so upset!" I said. "She can't get out of a sitting position by herself, either! She's tired and wants to lie down but she doesn't want to fall to get there."

"Well, if she's so tired then why is she screaming?" Rachel wanted to know.

Because she's a baby.

I took Zoë back to our room and left Rachel to sleep in peace and we talked about baby protocol in the morning. How Zoë fusses at night but will sometimes put herself back to sleep (when we're lucky) so I let her whimper for a few minutes before getting up to get her, but that if Rachel picks her up and bounces her and then plops her back in her crib it's a little confusing for her. She doesn't have the opportunity to self-sooth and feels a little abandoned. Not to mention that she can't lie down by herself yet.

Here's Benjamin and Miriam's room, which looks pretty much the same as it did before because that bed's not going anywhere. 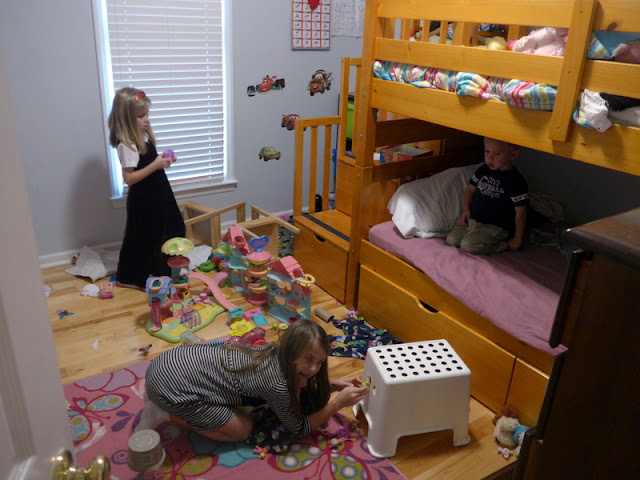 It's good for Benjamin to be in the position of underdog and has been interesting to watch Miriam establish her dominance in the room. Now it's her room that she's sharing with Benjamin, whereas before it was Rachel's room being shared with Miriam. Kids are so territorial.

I did spend some time putting together a little play corner for Benjamin with a little more masculine feel than the rest of the room: 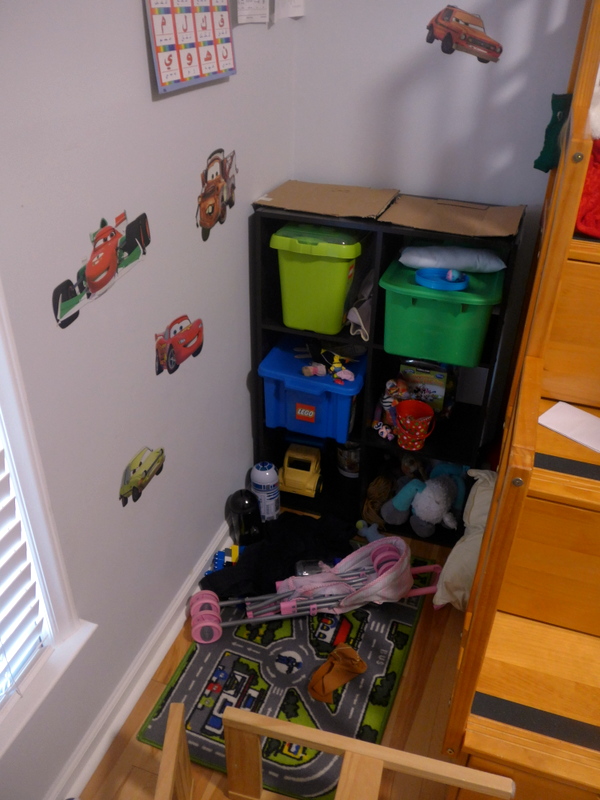 It's been a good arrangement so far. You might have noticed that all three of them are playing together in the picture above. It used to be that Rachel and Miriam would go into their room and slam the door in Benjamin's face, but that's hard to do now that it's his room, too. So they've been playing together all weekend.

I got rid of a bunch of stuff (including Benjamin's toddler bed) and told Andrew that I would be very judicious in my "shopping" so that we didn't end up bringing home too much.

But I was firm in my resolve.

"No, children," I said. "We don't have anywhere to put that. We don't need it. It's almost Christmas. We'll survive without it. You never play with your Littlest Pet Shops anymore, anyway. There are too many pieces. You've already picked out toys and books for each other for Christmas. It does look like fun but no, no, a thousand times no."

Then Andrew walked by and heard them begging and said, "Sure, you can have it. Why not?"

I blame this acquisition 100% on him.

We still have no where to put it and there are still too many pieces to keep track of, but the kids have been playing together rather nicely, so I suppose it was worth it.

We had so much help both setting up and taking down at this Trading Tables event, in part because a few people who'd asked me to put it on felt like it was their duty to pitch in. We didn't even have to take a load to goodwill at the end—we filled three other cars but left ours empty! I didn't even lift a finger while we were cleaning up; I just sat on my throne, nursed the baby and bossed people around.

It was the fastest breakdown ever.

It really helps that my (newish) friend LaTarndra comes at the end to take all sorts of leftovers for the homeless families she sponsors. We had a fun little chat about that. She's not part of an organization; she just invited a homeless family into her home one day, helped them find work and a house and then set about outfitting the house. She said I came into her life at just the right time—these Trading Tables have helped her help several families now. She's been coming to Trading Tables for about a year now. And it's so helpful for her to haul off all the clothes at the end (she lets her families pick through them and then takes the leftovers to goodwill). I think she's amazing. That kind of service sounds overwhelming to me at this point in my life, but organizing Trading Tables is something I can do.
Posted by Nancy at 5:38 PM