We been slowly readjusting to life post-musical. On Saturday Zoë and Daddy were suffering from burnout (and rightly so since we'd been out late for the musical the night before and were destined for another late night that night as well) and had a bit of a sleep-in together: 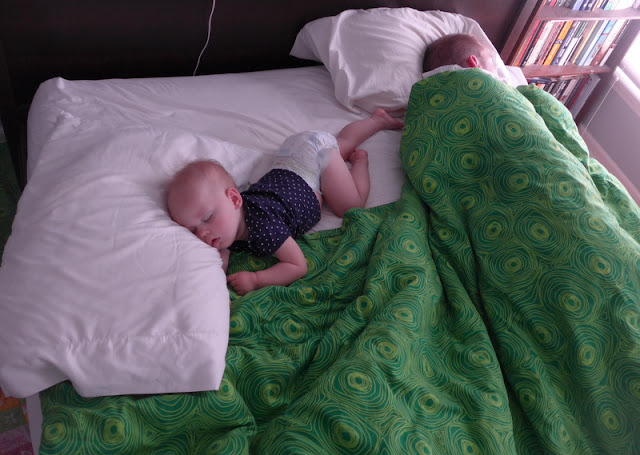 How someone so small can take up so much room in the bed I will never quite understand!


We spent the early morning frantically cleaning up our house. I should have taken before and after pictures—it was bad! I've been putting everything off until "after the musical," including things like folding and putting away the last five loads of laundry. Having company come over, however, allowed me to act like a drill sergeant without causing my little soldiers declare mutiny.

The girls watched the movie Amelia, which is about Amelia Earhart. Both Rachel and Jordan will be dressing up as Amelia Earhart for the third grade wax museum next week.

I really lucked out with school activities the past month or so. First Miriam's first grade musical. It was supposed to be on a rehearsal night and I was feeling terrible about missing her very first musical, but then it was postponed until...next week! I was so happy that I could put off all the preparation for that until after the musical! (I still need to pull together a vegetable costume of sorts; she wants to be a carrot).

Then Rachel came home a couple of weeks ago, frantic about her wax museum assignment. I looked up the date on the calendar and immediately also began freaking out. We had a week—one week!—to finish her research, come up with a costume, write a report, and do everything else required. I immediately started looking at patterns for aviator caps but I wasn't sure I'd be able to make one with the time I had so eventually we just bought a cheap one on Amazon (figuring it would be a popular costume accessory for a few years to come). But then her teacher sent home a note saying that the wax museum was being pushed back until the end of April, which meant that I didn't really have to worry about it until after the musical!

Now that it is after the musical I'm feeling a little overwhelmed by everything I've put off, but we'll get through it.

During Amelia, Christopher Eccleston came on the screen.

"Hey, Rachel, who's that?" Andrew asked.

Rachel looked at him, confused.

Rachel needed the prompting because Christopher Eccleston only played the doctor for one season, so there wasn't a lot of time for Rachel to get completely obsessed with him.

"Oh, yeah!" she said, with a glint of recognition.

If my husband can't tell the difference between fact and fiction our kids don't stand a chance!

Here's Benjamin with an eastern tent caterpillar that he found. I chided him a little for picking up a fuzzy caterpillar without asking because we've encountered some stinging caterpillars in the past.

"What's the rule about fuzzy caterpillars?" I asked fruitlessly before answering myself. "Ask a grown up before picking them up."

"Because sometimes the fuzzy ones sting," I explained. 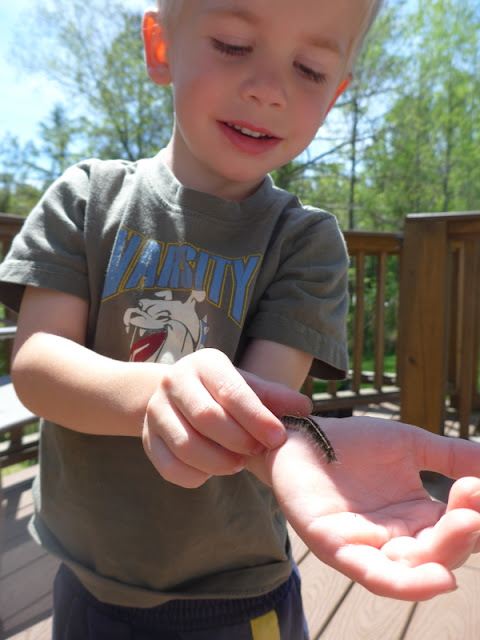 After Jordan went home we got ready for our last night of Chitty Chitty Bang Bang. After the show I gave Andrew a kiss on his cheek. He hates lipstick! 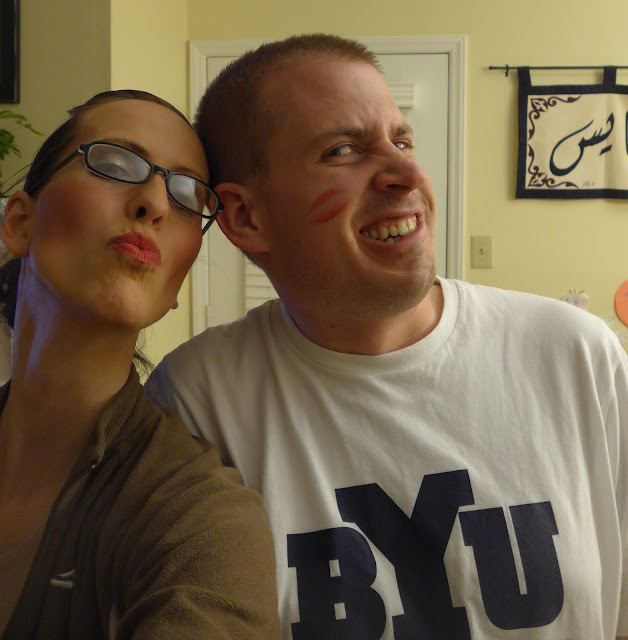 On Monday morning Benjamin alerted me that Zoë had climbed onto the dishwasher door. He was concerned by her behaviour because it's something that he frequently gets in trouble for so I had to explain that while it's wrong, it's also basically a baby rite of passage. She should get to do it at least once in her life. (And also she's a lot smaller than he is...) 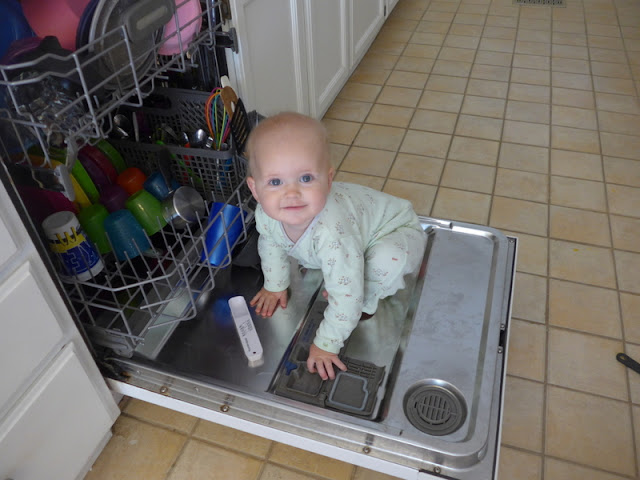 He found and picked and ate the first strawberry on Monday as well, which was very exciting for him. We've picked several others since then, not enough to consider it a crop or to save them for dessert, but just enough to take turns relishing the joy of a sun-ripened strawberry. 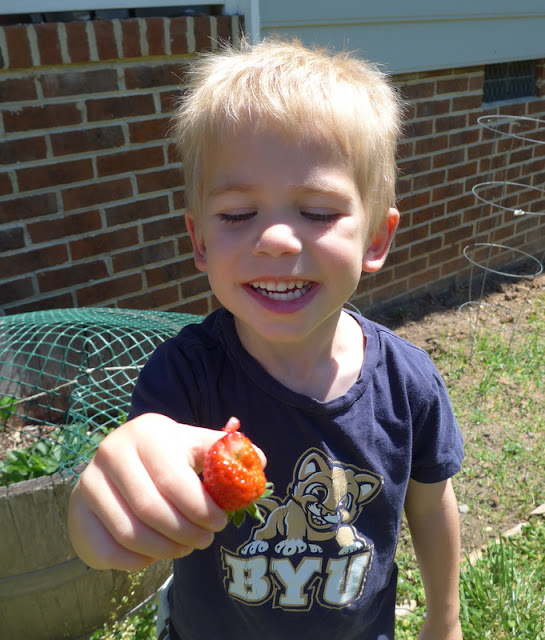 On Tuesday Miriam came home from school and complained of being too hot. I told her to think of a solution, rather than simply whine to me about it. She decided to change her outfit and also decided that said outfit should match the bright, bright, bright, bright sunshiny day. 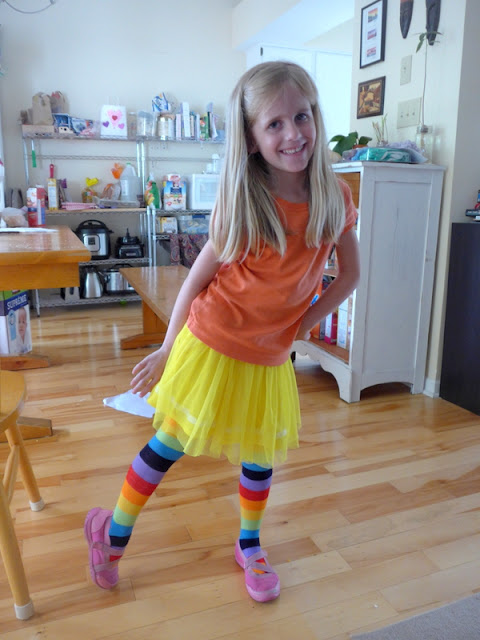 Tuesday also reinstated piano lessons. Rachel had no problem passing off all her songs (she'd been working on them since March—we took over a month off due to our crazy schedule—so she had plenty of time to practice them). Here she is shooting Zoë a look for interrupting her lesson. 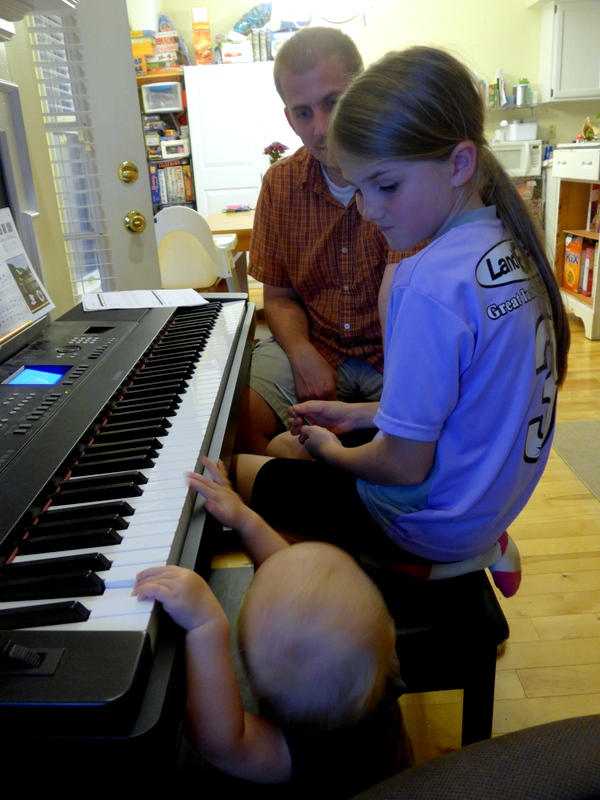 Zoë loves to play the piano. Sometimes she'll pound on the keys even when the piano isn't turned on. Often Benjamin will say, "Okay, Zoë!" and turn it on for her because he loves the extra noise. He knows exactly what numbers to type in to make the piano make explosion sounds instead of beautiful music.

Miriam is interested in piano lessons as well. We're planning on starting her up when Rachel finishes going through the first set of books.

Yesterday Benjamin wanted to play in a box with Zoë. She was much less keen on the idea. 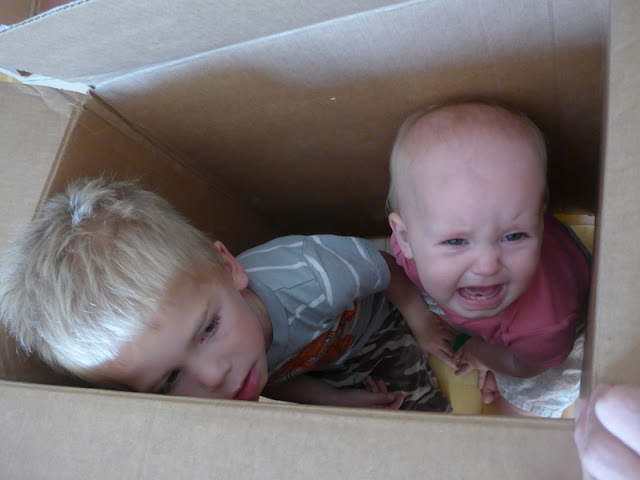 We went to the park in the afternoon so the kids could practice riding their bikes. Specifically I wanted Miriam and Benjamin to practice riding their bikes. Those two have no desire to learn. Miriam glumly waddled along the trail with the bike between her legs. Benjamin pulled his tricycle behind him as he ran to the park. Rachel, who learned to ride a couple of years ago, had fun though.

Miriam went down a slide backwards and her hair got caught on a screw and a big chunk came out, which was painful and upsetting for her, but she recovered nicely. 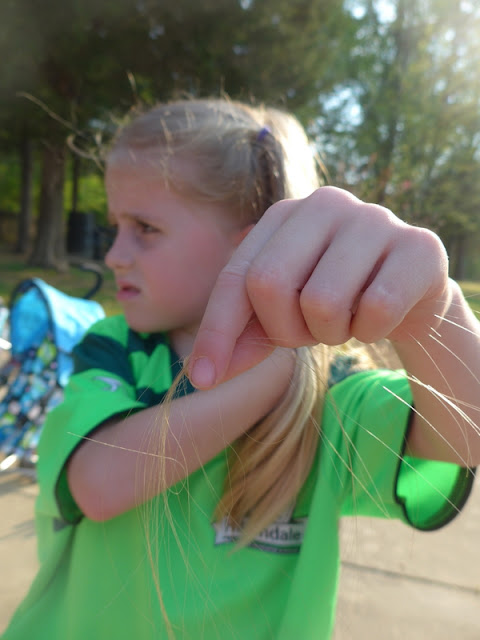 Zoë enjoyed climbing up the stairs and bridges on the play structure. She couldn't figure out why she could climb up some stairs and not others (the answer was that some stairs were stairs and others were actually ladders). This particular step (ladder) was a challenge for her: 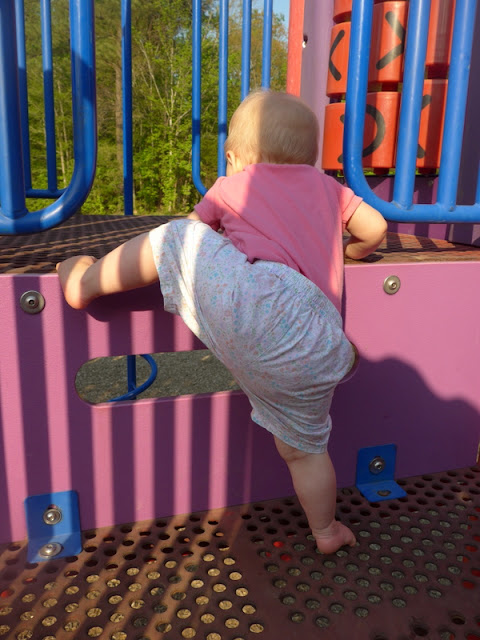 Here she is climbing up a bridge: 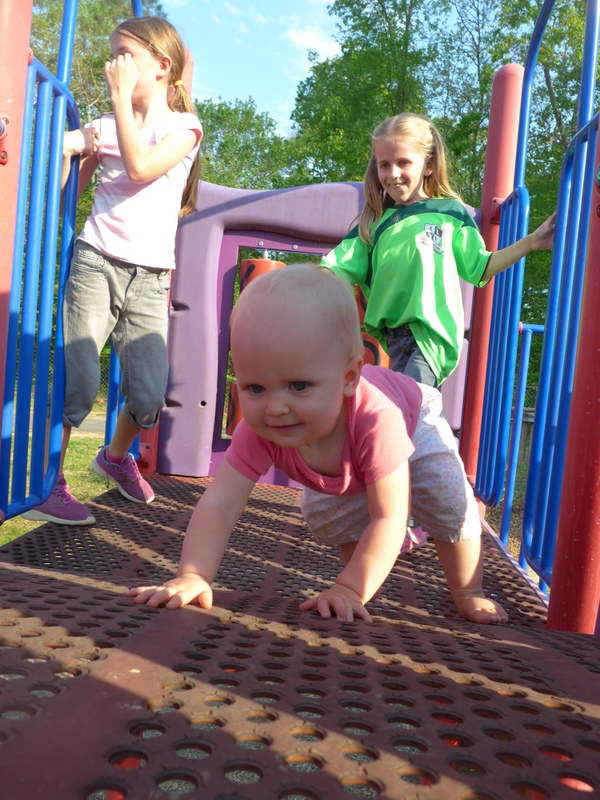 She was so cute trying to figure out how to work the bridge and gravity at the same time. She crawled up to the top and started going down the other side and then panicked because gravity was taking over. She quickly learned to turn around and go backwards. 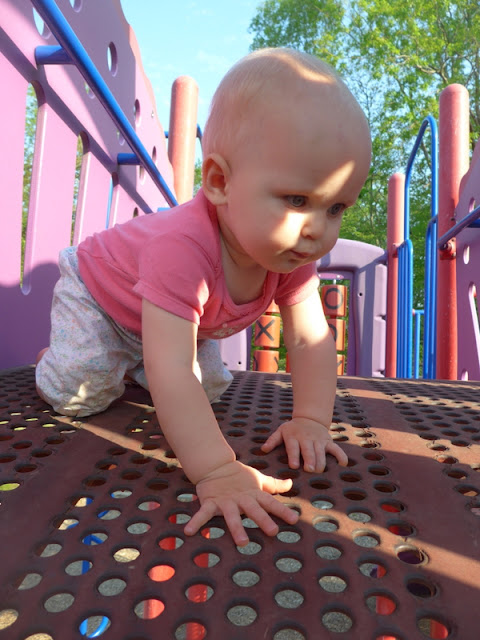 Here's Miriam pretending to be frightened: 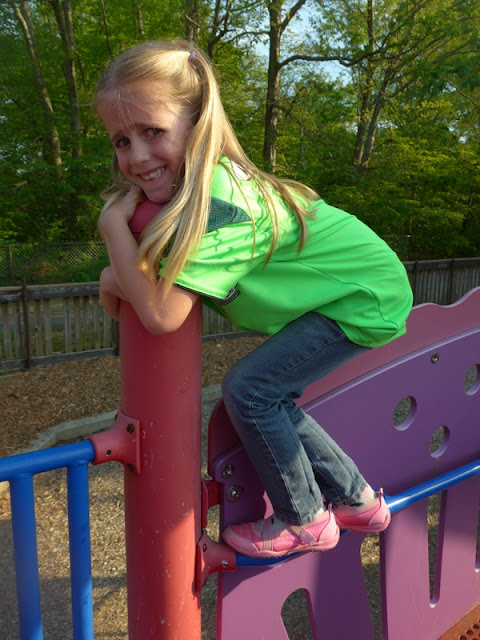 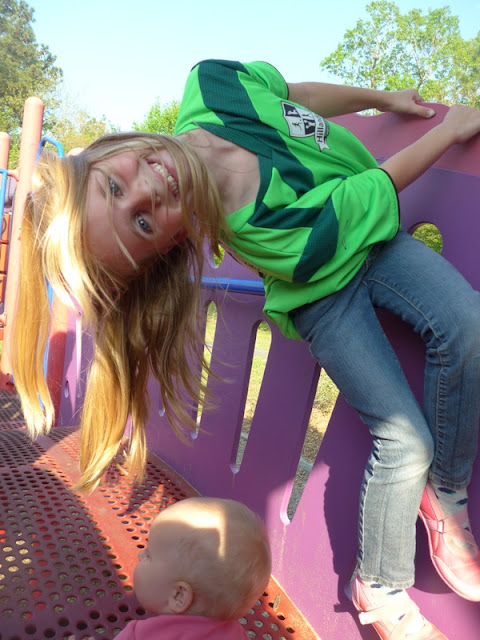 Here's Benjamin staying still for two seconds, probably to poke Zoë in the face (actually, it looks like I'm holding his hand—man, the man is nonstop!): 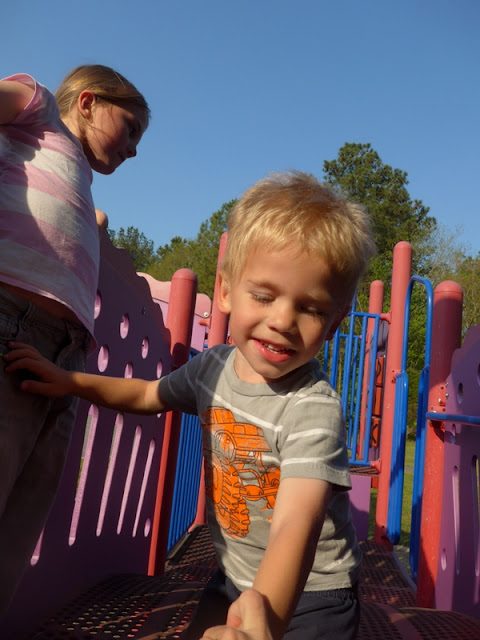 Here's Rachel posing for the camera (her hair is so long): 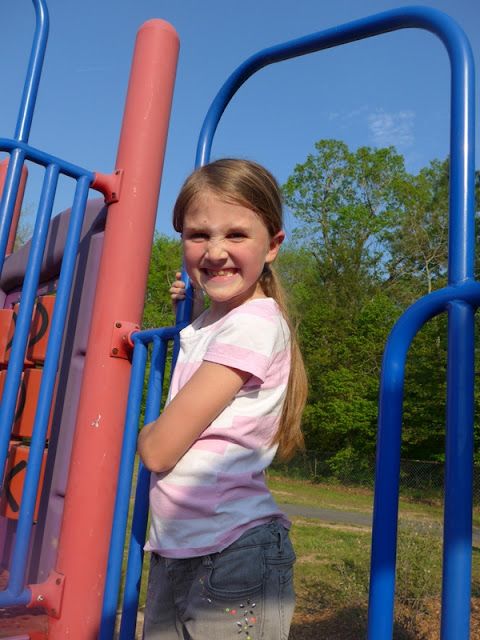 And here's a beautiful picture of all four kids: 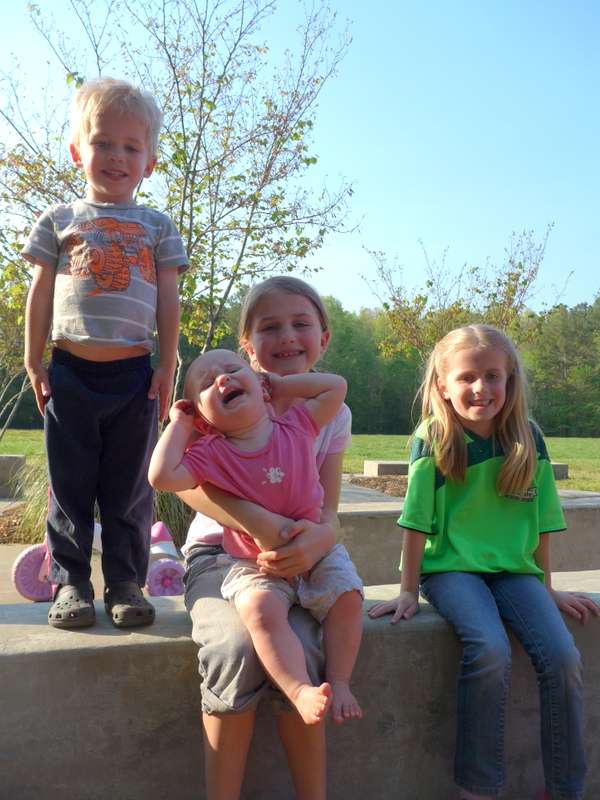 If we manage to get a decent family picture this year it will be a miracle (and I'll probably be holding Zoë).

Rachel rode her bike back to the van and then ran back to me so she could finish pushing Zoë. Zoë held onto the sides of the stroller like this the whole time. And I forgot to rotate this picture... 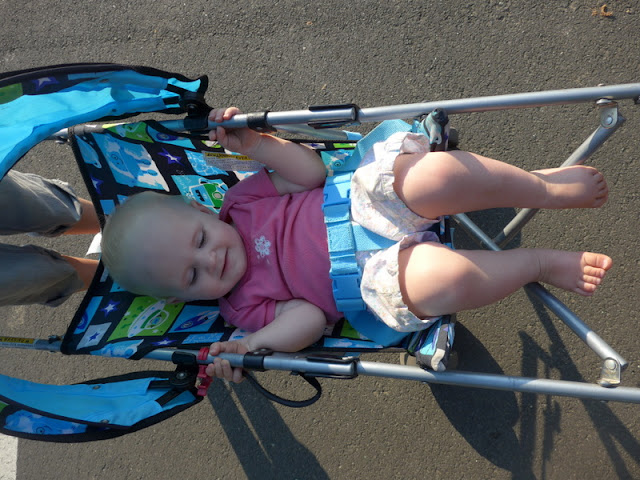 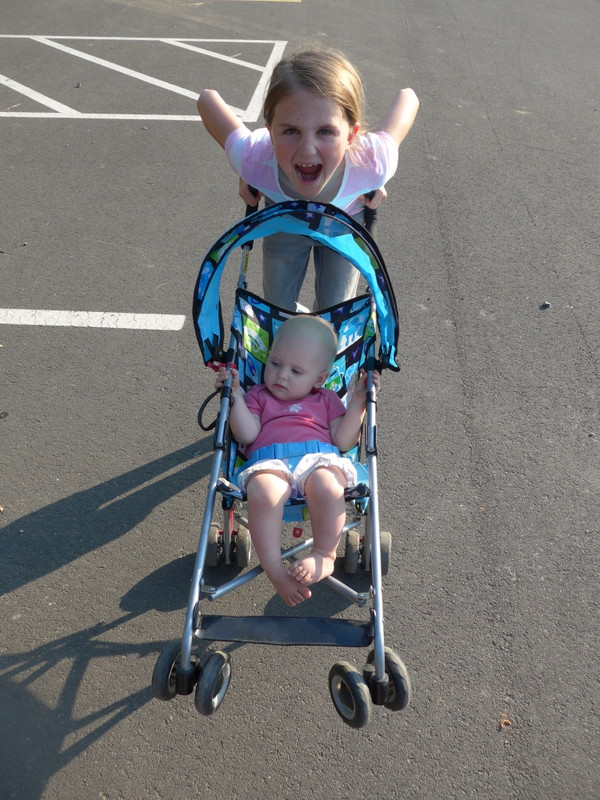 We've been pretty consistent about going on family walks in the evenings, now that the musical is over. Tonight we went on a longer than usual walk because Benjamin was running a little wild. He lost one of his crocs today and they are the only shoes that fit him right now so we spent a large part of the day looking for it. He didn't get a lot of outside time because he wanted his shoes.

It was frustrating because I kept finding crocs in random places, sure that I had found the missing one (after all there are only two, right?!) but Benjamin kept sabotaging my efforts by moving the shoe around with him as he looked (and then leaving it in random places) even though I told him (numerous times) to leave it on the shoe shelf so that we'd know where the not-lost shoe was.

I found his not-lost croc in the cabinet on top of the bin of flour, on the bathroom counter, and on the couch (to name a few places) and each time I'd hold it up with a grand exclamation of "Eureka!" or "Finally!" or "Wahoo!" And every time Benjamin would sigh and say, "I already knew where that one was."

The lost croc was behind his Bedroom door. Apparently.

Part of me wonders if at any given time I'd found one or the other and he was just moving them both around the house at will to drive me crazy.

Anyway, by bedtime we'd located both of them so we went for a walk. Benjamin's pyjama bottoms were slightly too big for him and kept falling down to his ankles every few steps. He insisted on running in front of us the whole walk (he's really into "winning" these days) so we got a nice view of him running until his pants would fall down, then we got to see him waddle for a few steps until his mind and body caught up with each other, and then he'd hike his pants back up and take off running again. It was hilarious.
Posted by Nancy at 12:53 AM