The most beautiful carrot on the block

The days of walking into the store and exiting with a giant piece of florescent poster board are, apparently, over. Either that or I don't know where to find it! We looked in the school supplies section of our friendly neighbourhood grocery store. They had plain white poster board, and a few other colours but not what we needed. For this project we needed orange (and I wasn't about to try to colour a project that size orange).

"Staples," Andrew said as we gave up hunting through the rack.

So yesterday after I took the children to the dentist (no cavities—yippee!) and after we stopped at the museum to play for a bit (because why not; running them back to school (at 3:00) seemed pointless and I had them all with me) we ran to Staples to look for orange poster board.

For an office supplies store they were sorely lacking in the poster board department.

I could buy a pack of white poster board.

I could buy a pack of poster board that was neon yellow on one side and neon pink on the other.

I could buy a pack of poster board that was red on one side and green on the other.

A single piece of poster board for sale...with balloons around the edges.

A single piece of poster board for sale...with a rapidly dandruffing glitter boarder.

Not for my worst enemy.

I sighed with defeat.

But then! A glimmering sparkle of something orange caught my eye...


It was $2.50, an outrageous price to pay for a single piece of poster board, but we bought it because a trip to Target is approximately 25 miles, roundtrip, which would cost us about a gallon of gas, which, even if Target happened to have a single piece of orange poster board for fifty cents, would have brought the total cost of that poster board up to at least $2.50.

I gave Miriam the money and let her pay so that she could keep the change (two whole pennies, wahoo!) and she proudly carried the large, unwieldily piece of paper out of the store. It acted like a sail in the wind and I was a little worried she'd be blown across the parking lot, but we all made it back to the van safely. And this afternoon we turned Miriam into the most bedazzled little carrot you've ever set eyes on.

Anne Shirley's got nothing on this gal!

She's so excited about this little musical. I can't wait to see her perform!

I also hope I don't have to buy poster board for a long time.

Because apparently it's hard to find? Or I don't know where to look? Or something?

I'd like to thank whoever made the primary birthday candles years ago. I don't think anyone can even recall who made them at this point in history, but thank you, whoever you are. You gave us the inspiration for her carrot costume. 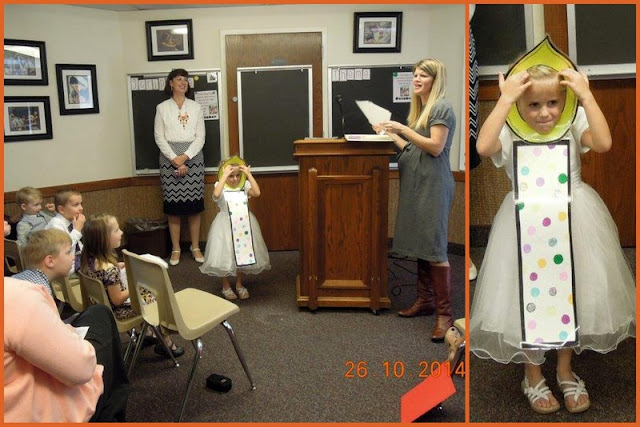 And inspiration was definitely needed because it's not often I sit around dreaming up ways to dress my child as a carrot (or any root vegetable for that matter). When I was still mulling over the whole carrot idea (which was put off until after the musical!) Miriam, feeling a little impatient and neglected, came up to me and said, with wearied resignation, "I guess I can just dress all in brown and be an ugly ol' potato."

Frankly, I'm not sure a potato costume would have been much easier. Though a carrot is a much more elegant vegetable, don't you think? At least it's more vibrant.... Anne Shirley should have been proud of her carrot top! My husband, who has mostly been banned from ever trying to compliment me, once told me my hair is the colour of "old wood."

So, basically my hair is the same hue as a potato. I'm a potato head. Thanks, hun.

"We'll figure out a carrot costume," I promised Miriam. "After the musical."

(Truthfully, my first thought was to borrow a potato costume but the couple in our ward who used to dress up as Mr. and Mrs. Potato Head for Halloween (maybe they still do?) moved away and, as far as I know, took their potato costumes with them. Miriam's probably glad about that because who would want to be a drab potato when you could be a glittering carrot?)
Posted by Nancy at 1:08 AM