How Does Your Garden Grow?

Miriam has been excited about being in a musical at school since Rachel's first musical, back when Rachel was in grade one. She loyally attended Rachel's second grade musical last year, and enjoyed watching Rachel's musical twice this year (once during school and once for the evening performance) and just a few days later it would be Rachel's turn to watch her.

But then the musical was postponed, as I've mentioned, which was an enormous disappointment for Miriam. Her excitement, which had been mounting daily, suddenly came to a grinding, screeching, anticlimactic halt. She'd have to wait to get her chance to perform?! And not only that, but she'd have to wait until an undetermined date—TBD!

Her excitement plateaued for a while, but soon began climbing once again.

After so many weeks of waiting, I was beginning to wonder if her little body could contain any more emotion. She made it all the way to seven weeks after the originally scheduled event all in one piece and was, needless to say, thrilled to perform for us tonight.

Andrew had taken Benjamin out (to use the bathroom, maybe?) and caught a picture of Miriam in the hallway. She opted to ignore him...


Here she is getting situated with her class:

And pulling a goofy face when she spotted her family out in the crowd: 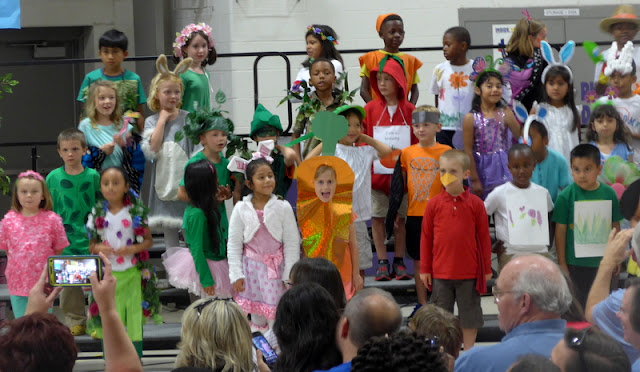 And doing some actions to one of the songs: 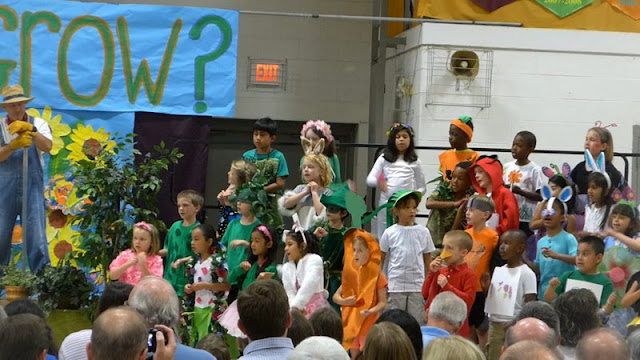 It was actually a little difficult for her to do the actions while wearing her costume, but she managed to work around it most of the time. I hadn't really thought about actions when we designed it. Obviously.

It was an adorable performance. I was glad that I was at least a little familiar with the script otherwise I would have had no idea what was going on (Andrew remarked, "There was a storyline?" Yes, there was a storyline) because most everyone panicked in front of the crowd, quickly mumbling out their line as they ran away from the microphone. Even Miriam, who had spent months practicing how to say her line in the bathroom mirror with gusto, choked out her line and ran away.

But I think it's great that they get the chance to stand in front of a room of people and try.

They were so adorable doing it!

We sang, "We’re the weeds, we’re cool! We’re the weeds, weeds rule!" pretty much the whole way home, though I think we weren't supposed to be drawn to the "bad guy" song we were anyway because it was a rap and our family has suddenly developed and affinity for rap (thanks, Miranda).


When we grow, we go for broke.
Precious Pansies! WE CHOKE!

We don’t need an invitation!
Back off Jack, no cultivation!
We take care of our own needs.
Listen Pansies! WE’RE WEEDS!

There was a deeper message to the musical, of course. For example, hard work:

And love and kindness:

But that rap though—and the little kids doing their solo rap verses? Man.

It was a fun evening out for our family. We enjoyed watching Miriam as much as she enjoyed performing.

Oh, backtracking (because my mind doesn't always work in a cyclical fashion)...

I had to go to Miriam's classroom to help her into her costume because she had a little mishap while getting out of her costume after they performed for the school in the afternoon. She came running off the bus in tears, sniffling about "an impossible knot!"

I assured her that there were multiple solutions to the problem (there usually is at least one solution to any problem) and that we'd think of something. I could help her untie the knot (sometimes grown-up fingers a more deft when it comes to unknotting) or we could cut off the old string and put new string on. We decided to try untying the knot first (but brought some string just in case). I was able to get the knots out in no time and as I was tying Miriam back into her costume her teacher came into the room and said, "I suddenly have a strong urge to read...THIS BOOK!" And he pulled out a copy of Creepy Carrots from behind his back (which I'm assuming he read to the kids while they waited for their call).

Oh, and there was only one other carrot in the whole production—a boy in Miriam's class by the name of Andrew.