Benjamin was born a fighter. Once he decided he was coming there was, literally, no stopping him (believe me, we tried). As a little preemie in the NICU he refused bottles and pacifiers alike (even with coaching from an occupational therapist). He could roll over before he'd even reached his due date and I think the only reason it took him so long to crawl or walk was because his head was too big for him to hold up. He hardly babbled until he was 18 months old; I was sure he was suffering from a speech delay, but he finally started talking (and hasn't stopped since).

Potty training him has been the worst.

Getting him to do anything that wasn't originally his idea is...difficult.

Would it surprise you to learn he's resisted learning how to draw/write/colour? It's been quite the uphill battle. For the longest time all he'd do was scribble—and I was excited about those scribbles!

Now, scissors? Those he learned to use early on.

A good "project" for Benjamin involves cutting up paper and then taping, gluing or stapling those little pieces back together in haphazard fashion. And then cutting it up all over again.

Occasionally he scribbles on the paper before cutting it, but very rarely.

During sacrament meeting while his sisters create colourful, full-page masterpieces, Benjamin can be found twisting the ward bulletin into a "lightsaber."

To sum up: Benjamin is not interested in writing.

This morning when he brought me a piece of paper and asked if he could draw on it I, of course, said yes. I always (usually) encourage him to write/draw/colour when it's his idea because it so rarely is his idea. I was even more excited when he brought me his picture for praise and it was actually a picture! He'd drawn our family! From left to right is Daddy, Benjamin, Zoë, Rachel giving Miriam a piggyback ride, and Mommy.

This picture was drawn on a paper I'd used last night to illustrate the hierarchy of "being the boss" in our household. I asked Benjamin to do something and he said, "You're not the boss of me. I'm the boss of myself!" And that got him into a little bit of trouble (it was a rough day with him) and also ignited a firestorm of questions about hierarchy.

Each older sibling expressed feelings of outranking the littler ones.

"I can't boss Rachel around, but I can boss Benjamin and Zoë."

"But I'm the boss of me! And of Zoë because she's little."

"I'm the oldest so sometimes I'm in charge."

"But just a little bit more of a boss than the other kids, right?"

They weren't getting it, so I got out a piece of paper and showed them how Mom and Dad are at the top because we are the parents, which means we are in charge of our house. Then I drew the kids in to show them that they are all at the same level. They are in charge of their own choices, but not the choices of their brother/sisters. And Mom and Dad are the bosses so they can trump decisions the kids make.

For example, if Mom and Dad ask you to clean up your toys, you have two choices: to clean them up or to not clean them up. Being the boss of yourself allows you to make that choice; however, if it's not a choice that makes Mom and Dad happy you'll probably be coerced into cleaning up. Because Mom and Dad are the boss.

That maybe sounds meaner than it is.

Let's just say: the three year old isn't in charge (and him thinking that he is makes him his own worst enemy (while I write this he's enjoying the confines of his bedroom because he's "the boss of himself")).

Anyway, after he'd finished his portrait of his family, he drew lines matching each person's name with their picture, which I thought was cute: 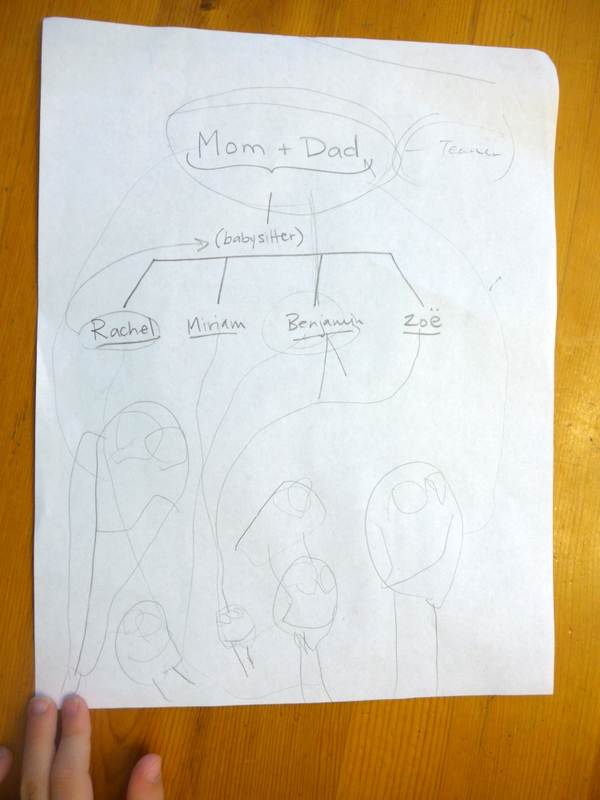 He has resisted any sort of literary advancement as well, but he does recognize everyone's name. He knows Z is for Zoë and R is for Rachel and B is for Benjamin. He can tell the difference between the word Miriam and the word Mom. So he's not doing too bad in the reading department, I guess.

The babysitter on the chart is a temporary position of power (sometimes Rachel will be in charge of supervising backyard play, for example, which bumps her position on the hierarchy temporarily, but certainly not permanently).

The lines under Benjamin's name means that when he's the dad he certainly can decide when it's bedtime and whether his kids have to clean up their toys or not (but right now, while he's our little boy, he has to listen to his mom and dad (or, you know, get in trouble a lot)). I don't really enjoy conversations like this—declaring that I am the boss—but every once in a while they are necessary.

On a completely different note, I read an article once about how children only understood and had control over their bodies as far as they could illustrate it. I guess it's a pretty common theory since I can find a lot about it (just not the article I'd read originally). Actually, there's a whole Draw-a-Person test (which my girls have both done with their kindergarten examination with the doctor). I don't think it measures intelligence, per se, but certainly it shows cognitive development.

Anyway, when I read the original article that I can't found now part of me was like, "Yeah, no wonder Benjamin can't draw people! He never has any clue what his body is doing!"

Part of me wants to chalk it up to gender differences. He's a boy! Boys gain gross motor skills faster than girls and take longer to master fine motor skills. That's a thing, right? (Or maybe it's a myth). That might explain why he's always running and jumping and flinging his body off too-high of surfaces, right?

Another part of me wonders if it has anything to do with his prematurity. Because that's also a thing.

In the end, I suppose it doesn't matter because these are things that I can't be the boss of. He's developing these skills at his own pace while he's marching to the beat of his own drum and being his own boss.

Did you hear that, Benjamin?

You win. You're your own boss...when it comes to cognitive development.

But when it comes to whether or not you have to put the silverware away then I'm the boss. Deal?
Posted by Nancy at 12:44 PM