This year has flown by! Already I'm worried that I didn't savour Zoë's babyhood well enough. With three other kids to look after it's difficult to know if I'm giving any them the attention they need. While I'm happy to know the difficult moments are passing just as quickly, it's hard to know that childhood is fleeting. These babies are growing up right before my eyes.

Zoë turned eleven months old yesterday. I'm not sure I've ever quite caught her turning a month older on the actual day she turns a month older. I'll never be one of those moms who takes a picture of their baby with a sticker on their onesie declaring how many months they are. Obviously. But here's Zoë at around eleven months "with" her cousin Maren (who is around a year old). They're both learning how to balance: 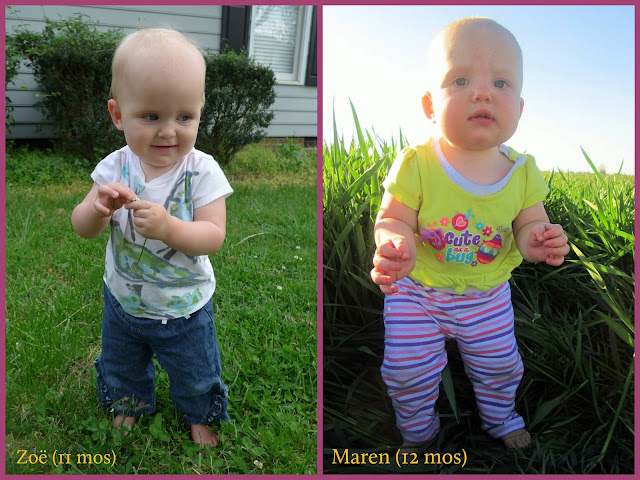 Technically Maren is approximately 2222 miles away from us (I looked it up), but it's fun to know that she and Zoë both got to go outside to run (or stand) in the grass with bare feet.

At eleven months Zoë is still loving peek-a-boo. She loves waving at people (from a safe distance) and especially loves shopping trips because she gets to wave to everyone from the shopping cart. She will stop what she's doing to say hello and goodbye (even if she's busy fussing). She sometimes will say "Hello!" or "Hi!" If she says "Hi!" she will often keep moving her mouth, inaudibly repeating that syllable a number of times before stopping.

In addition to salutations, she's been known to say Mama, Dad, RaRa (for Rachel), and no.

She had a hard time with the musical; she just hated being away from Mommy. She thinks the stake center is a terrible, terrible place. Just being in the parking lot makes her nervous (because she knows it means Mom will be leaving her at some point). I was nursing her the other day and was listening to Chitty Chitty Bang Bang and when The Bombie Samba came on she stopped eating, unlatched, and cried, "Noooooo!" It was pretty funny.

Overall, she seems to enjoy music though. She loves clapping and bouncing and singing. When she's really tired she likes to sing to herself. She really enjoys the song Pat-a-Cake.

She recently discovered that books were made for more than just chewing on or ripping up and has come to appreciate the written word and pretty illustrations. She especially likes touch-and-feel books, but has also started taking books around to people, knowing that if she's lucky they will stop what they're doing in order to read her a story. There are a lot of readers in this house for Zoë to keep busy! Sometimes her siblings get frustrated that she wants to turn the page before all the words get read. She can be a little impatient sometimes but is getting better at sitting through our evening story time.

She loves to chew on things. We've caught her chewing on the kitchen table, shoes, and any other number of things. She especially enjoys paper, wood, leather, and metal. She does not enjoy plastic, which most baby toys seem to be made of these days. We have a little wooden puzzle that she likes to play with. One side is raw wood and the other side has the picture on it (it's like a cardboard overlay or something). Zoë prefers the feel of the wood in her mouth so she'll pick up two pieces and hold them like a sandwich, with the wood sides facing out.

I hate it when kids chew on puzzle pieces because it wears off the image and then the puzzle looks nasty, but when she chews on them this way it doesn't seem to do too much damage.

She's taken a solitary step on many occasions, but never any more than that. She's getting braver and braver every day, though! She'll be walking soon, I'm sure. This will help save her pants! Here she is after helping me in the garden yesterday: 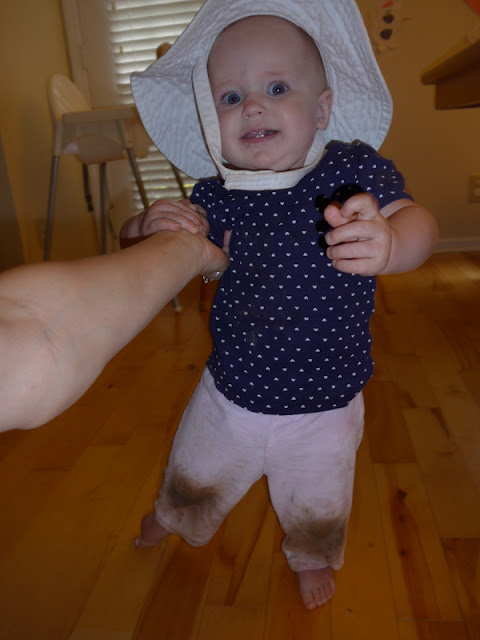 She has eight teeth, loves to bark like a dog, sleeps terribly, and is the most loved baby on the planet (probably). She may have taken a little getting used to (just the other day Rachel came up to me and said, "You know, I am glad that you had Zoë," as if it had taken her that long to decide (I decided that much sooner, for the record)). We're super glad she's ours and I, for one, can't believe it's almost time for her first birthday!

Already a number of ladies I was pregnant "with" when I was expecting Zoë are expecting again and I can hardly believe it, not only because I'm still experiencing lactational amenorrhea (for the win) and will still be infertile for several more months (hallelujah) and the idea of being pregnant again boggles my brain (I don't think my body is capable of such a feat), but because I still feel like I just had her! How is it possible she was born eleven months ago!?
Posted by Nancy at 10:08 PM