Last night Miriam said family prayer and was sure to pray a lot about the first grade musical—that it would go well and everyone would remember their lines and songs and so forth. When she finished her prayer Rachel caustically (and nervously) remarked, "Thanks for mentioning the wax museum, Miriam!"

Sarcasm runs deep in these waters. Miriam, you see, had made no petition in her prayer about the wax museum.

I assured Rachel that her wax museum would be fine and that she could pray for it to go well in her personal prayers and that I would pray for her, too. (And we talked with Miriam about how we should try to remember to think about others in our prayers, especially when we're saying family prayer).

The wax museum went on without a hitch.

We had a little bit of trouble leaving the house this morning and arrived at the school around 11:25 instead of 11:00 (the wax museum was from 10 to 11:30), but we were able to find Rachel and listen to her give her little speech a few times as well as visit a few of her friends. It was a fun little outing for Benjamin and Zoë, though by the time we got there the kids were getting a little tired of repeating their speeches since the entire school had come by to visit their museum already!

Each of the kids had a little "button" in front of them that you had to press to activate their speech. It was very cute and Rachel did very well. 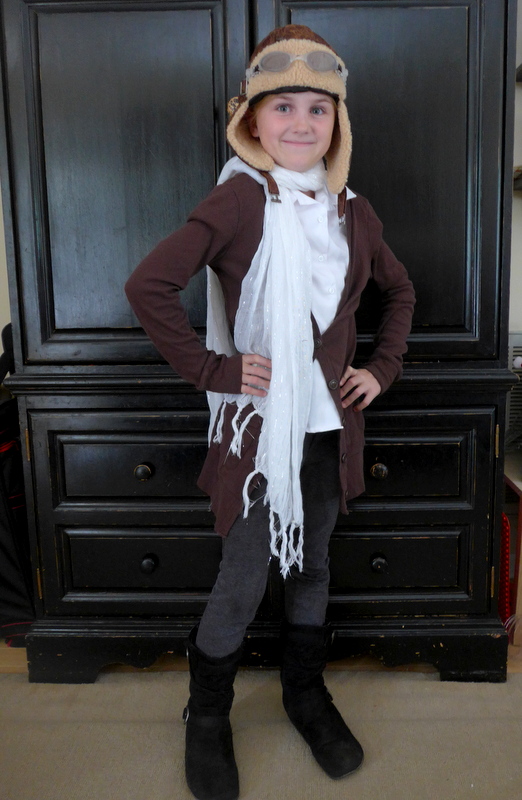 Here's the sign that she made for her exhibit: 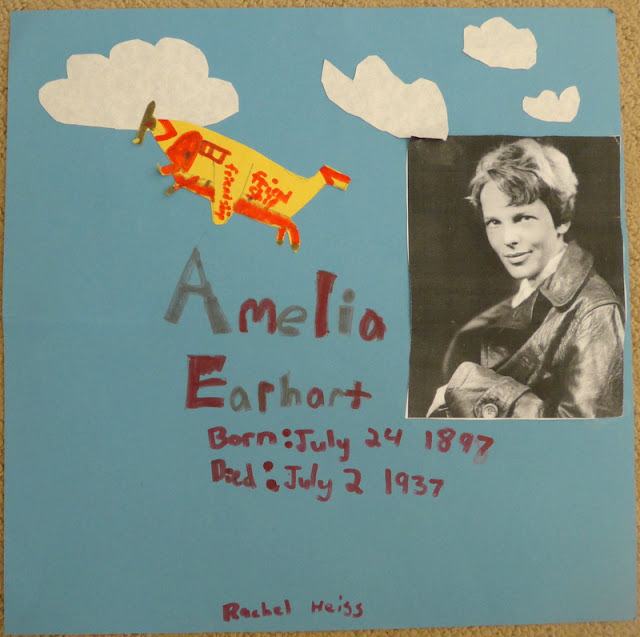 And here's her speech:

Hello, I’m Amelia Mary Earhart. I was born in Atchison,Kansas in 1897. I was a well-respected author and pilot. You might know that I flew across the Atlantic and Pacific Oceans, but here are some interesting facts that you might not know about me.

As a young girl I built chicken traps around the yard. I actually caught one once! I moved around a lot and usually went with my parents, but for the summer I stayed with my grandma in Atchison. At one point I went to a fair with my family. I saw my first airplane there. It was not impressive.

During World War I I was a nurse. I saw warplanes and decided I wanted to fly, so I did! I took flying lessons from Neta Snook. I flew across the Atlantic and Pacific Oceans solo before marrying George Putnam, my editor, in 1931. Then in 1937, after I had been married to George for six years, I decided to fly around the world. I tried to, but crashed somewhere in the Pacific Ocean July 2, 1937.

Thanks for visiting me!

On a(n un)related note, I went to Relative Finder on Sunday because a friend had posted that she was excited to find out she was (quite distantly) related to Walt Disney and Thomas Edison, and then encouraged other people to hop on to see who their influential long-lost cousins were, so I took her up on it. Turns out we're probably super distantly related ourselves since both Walt Disney and Thomas Edison showed up in our lists.

Once you get that many removals my brain kind of breaks a bit, but there you have it.

Anyway, as we were scrolling through the list of famous Americans—I say 'we' because I had both girls reading over my shoulder—I heard a deafening squeal of joy. Rachel's eyes had seen it before mine had, but there it was, plain as day.

To sweeten the deal, I'm 5th cousins 5 times removed with Susan B. Anthony.

John Hancock, for my girls' reference, is our 3rd cousin 3 times removed.

We had a 13th great-grandfather on the Mayflower (14th for my kids, I suppose).

And the last kind of Scotland—and all of Great Britain—to be killed in battle (James IV Stewart) was my 15th great-grandfather (16th for our kids), while Elizabeth Tudor is my 4th cousin 14 times removed.

We had quite a bit of fun poking around on there. I sense a family night lesson coming on...
Posted by Nancy at 4:24 PM