After a few rough nights with Zoë (we're talking going to bed at 4 or 5 am) and knowing that I'd have to spend the afternoon herding children around on a hot, dusty field, when Benjamin woke me up (and more to the point he woke up the baby!) on Wednesday morning I actually cried.

He felt bad about that so Thursday morning he let me and Zoë have a good long sleep in while he quietly entertained himself. Sure, he entertained himself by pushing chairs in order to reach everything that's too high for him to reach and getting it down...but he did it quietly! He got down the kids' baby books and looked through them, got down the markers and drew me a picture, built himself a lovely fort in the living room, and then got down his Easter basket and gorged himself on Reese's Pieces.

"Do you want some breakfast?" I asked.

"I already had breakfast," he said.

"You did?!" I asked, noticing the lack of mess usually indicative of him getting himself food (no milk jug—no dirty dishes!—on the table, no cereal scattered about, no spills). "What did you have?"

"Actually, I didn't have breakfast," he said.

That's when I noticed the bench was out of place. He'd had his fill of candy and then put his little basket back up. Frankly, I don't even care that he had candy for breakfast because it meant I got to sleep for a little while longer and sometimes sleep is more important than nutrition. Besides, this is like solid evidence that my three-year-old knows that candy isn't real food, right? Because he freely admitted that candy doesn't equal breakfast.

We had a pretty happy morning. Benjamin pretended that he was President and wrote out a declaration: 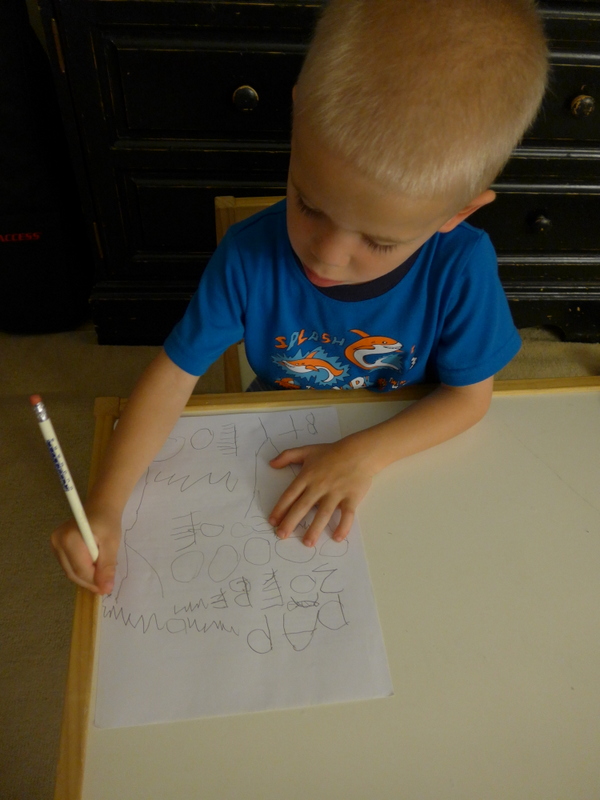 His newfound interest in writing is spectacular! He wrote out DAD MOM ZOE and BEN along with a bunch of nonsense. But the fact that he's trying to make any sense at all is huge! His A is so funny. Every time he tries to write A he writes H and then draws a line connecting the two lines of his H. For some reason he can't figure out how to draw slanting lines. 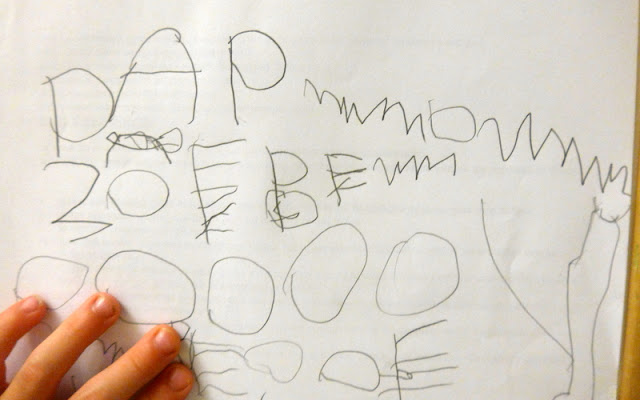 Here's where Zoë stood, watching him write out his declaration: 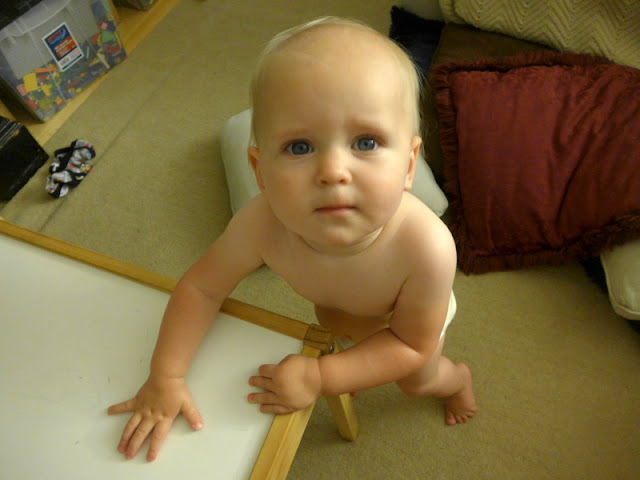 And here's Benjamin with a couple other drawings that he made. The one on the left is actually a portrait of Zoë (which you could tell from reading the caption, obviously—РГРOММММН. My favourite part of this picture, however, is that little photo bomber in the bottom right. Oh, Zo! 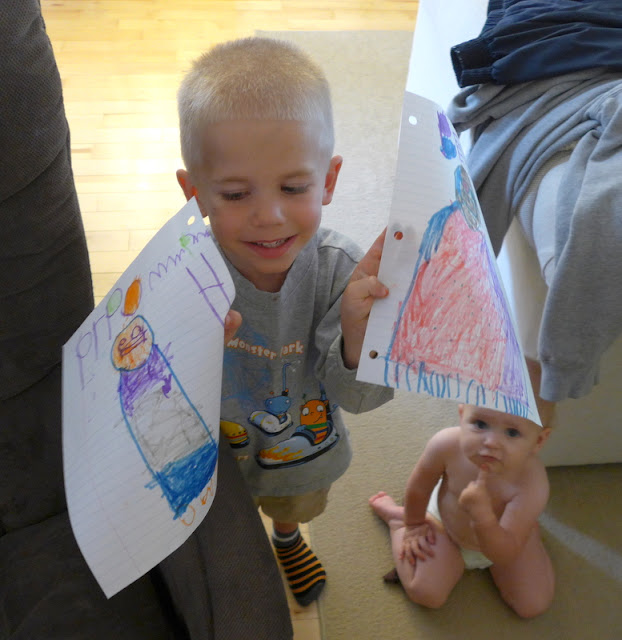 We had a wonderful time at field day.

After school we went to campus to meet Daddy so that he could help us get to the eye doctor so that I could pick up my new glasses (there's a little jump on the freeway and I just am not into freeways), so now I have new glasses. Yay!

We came home and had dinner and got ready for bed. I read Benjamin a story while Rachel practiced the piano and Miriam worked on her Sunshine Math. Benjamin was the first one asleep. And who do you think was next (at least out of the high maintenance kiddos; truthfully probably Miriam was next but then...)?

She fell asleep around 9:30 and then in a miraculous turn of events she stayed asleep! She just slept and slept and slept while I did a few things (wrote a blog post, did Duolingo, fixed an excel document for my mom, started Anne Frank's diary).

In another miraculous turn of events we heard the door to Benjamin and Miriam's room open around 11:30. Both Andrew and I got up to see who was awake. It was Benjamin! He walked to the bathroom, flipped on the light, went potty, and then stumbled back to bed all on his own!

We stopped using the chummie a while ago because I just couldn't handle it anymore. The alarm didn't seem to help him wake up (He sleeps through the loudest, most vibratiest options! He would fumble around in his sleep and unplug it or pull the sensor off his underwear or do any number of the various methods he worked up to sabotage that machine)) and I was sick of dealing with a soaked child, bed, and bedwetting alarm. So we went back to the wake-them-up-to-pee-in-the-middle-of-the-night method.

I read about it a bit more on eric.org.uk and learned that you should vary your wake up time (which I think happens rather naturally in our house) and that you should make sure your child is fully awake when you take them potty (which doesn't always happen in our house). So I've been going in there and prodding Benjamin until he wakes up and then asking him to find the bathroom (which has been hilarious—he has no idea what he's doing in the middle of the night—"Not that way, Buddy!") hoping that this will help him wake up so that he knows he's emptying his bladder.

(As an aside, check out these 'Wee and Poo' booklets!)

Apparently his brain finally got the message that it shouldn't let his bladder empty while he's asleep so it finally, finally sent him the "Wake up!" message. Hallelujah!

We praised him up and down this morning and he got to choose a special sticker for his chart.

I certainly hope so. And even if his brain chummie isn't fully functional yet, perhaps his brain will at least respond to the chummie alarm now...or maybe Benjamin will go back to wetting the bed every night and Zoë (who is still sleeping) will stay up until 3 AM.

Either way, I've enjoyed this short stay in this alternative dimension where my preschooler is potty trained and my almost-toddler-but-still-officially-a-baby-for-ten-more-days actually sleeps through the night.*

*Admittedly I still nursed her four times between midnight and 8 AM. But I can handle that. It's when nights are really bad that I start crying when my son wakes me up in the morning.
Posted by Nancy at 9:38 AM