Time seems to speed up with each child. It's rather cliché to say "it goes so fast," but it honestly does. When I was suffering through months and months of not sleeping, due to Rachel, I would feel almost offended when people would suggest that "it goes so fast" because it felt torturously slow, like I was stuck in some inane cycle: feed the baby, get thrown up on, get pooped on, [rinse, if you're lucky], and repeat! It felt like she would never grow up. She'd never stop spitting up, she'd never learn to sleep through the night, she'd never wean. Babyhood was hard and laborious and lonesome and eternal, or so it felt.

But then I added one more. I was still feeding a baby and getting spat up on constantly, but I was also reading stories and doing little crafts, and going to the park.

And then I added one more. I was still feeding a baby and was getting spat up on even more than ever, but I was also reading stories, doing little crafts, going to the park, volunteering in a classroom, attending dance recitals, and so forth.

And then we added one more. I was still feeding a baby but was blessed to get one without reflux (hallelujah!) and was also reading stories, doing little crafts, going to the park, volunteering in two classrooms, going to soccer practice, being in a musical, shuttling kids to ukulele practice, and so forth.

These kids have filled our lives with so much goodness that time is suddenly feeling more like a whirlwind and less of a never-ending dirge. So even though I haven't had a proper sleep in months, I made the mistake of blinking and all of a sudden Zoë turned a year old! 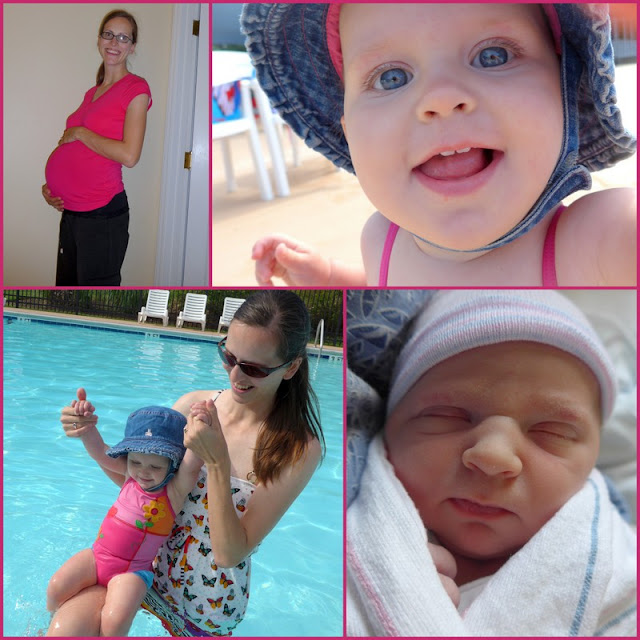 We skyped with my parents yesterday and I was coaxing the children to participate in the conversation (sometimes they forget what to talk about).

"And whose birthday is tomorrow...?" I said, hoping they'd start chattering.

"You mean Wednesday," my mom said.

"Tomorrow!?" my mom cried. "Her card's not going to get there in time! I was going to mail her stuff tomorrow!"

So it's not just me. Time is going too quickly for my mom, too!

Anyway, after dinner we convened in the living room for family night and present opening. Miriam had a bit of a difficult time letting Zoë open her gifts and we eventually had to move her to the couch so she could watch from Andrew's lap (admittedly Zoë did need a little help unwrapping but Miriam was entirely too much hands on).

The kids got together and filled this little chest (from Zoë's baby shower) with homemade gifts: a card from each of them, an alphabet book they wrote and illustrated together, a couple of empty toilet paper rolls, and some paper hearts. Zoë's favourite part was the box. 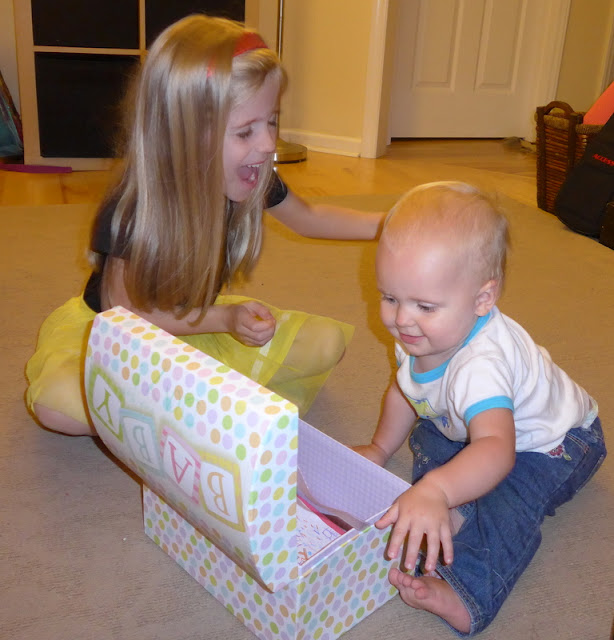 Here she is pulling out a couple of cards: 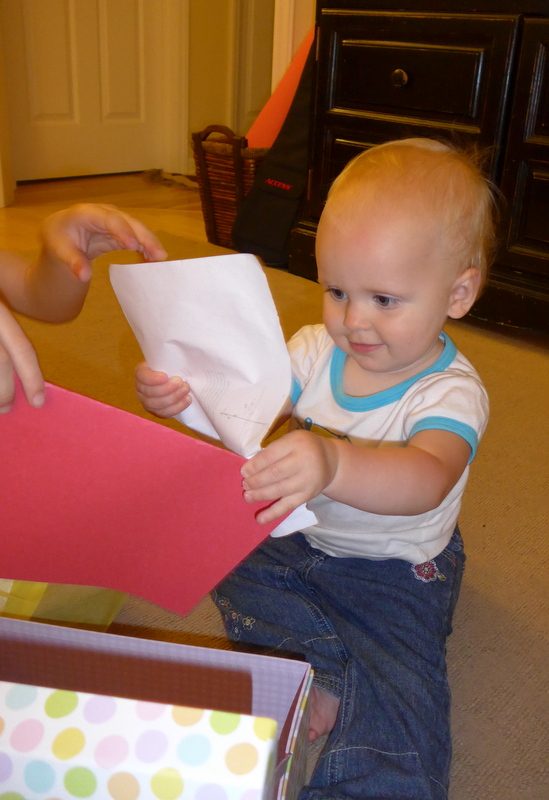 But that was only to get them out of the box. 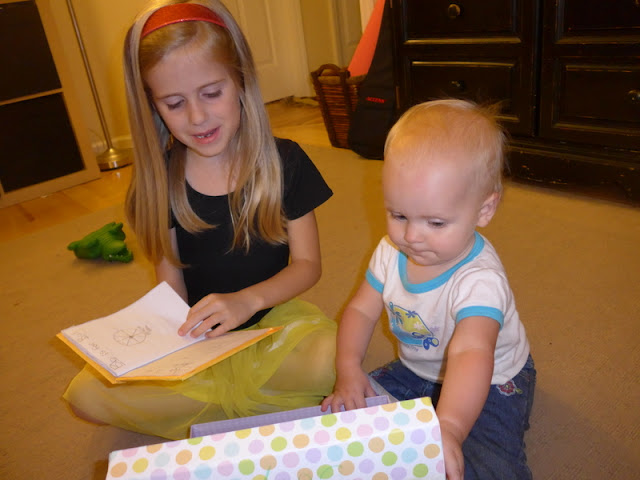 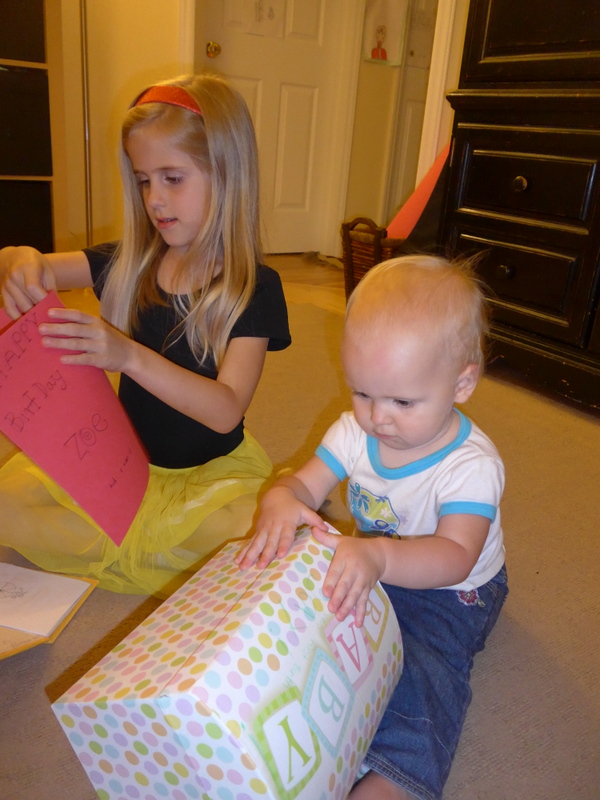 Here's the card that Miriam made: 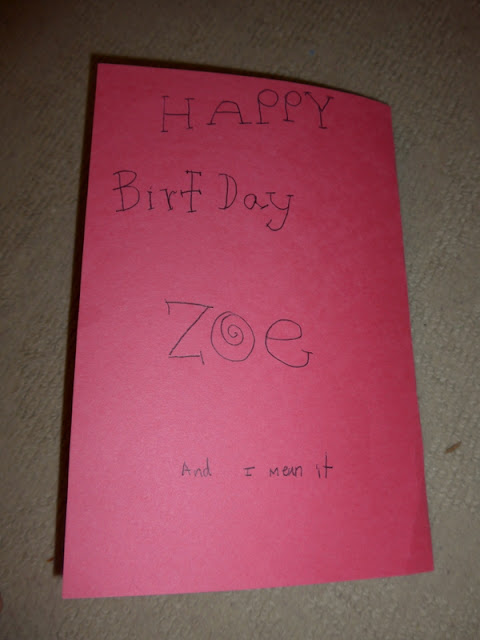 And that Rachel made: 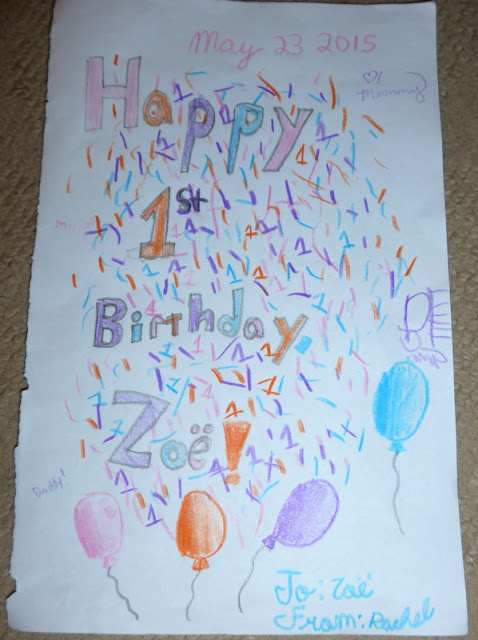 To get Zoë interested in her other gifts we had to put them inside that silly box. 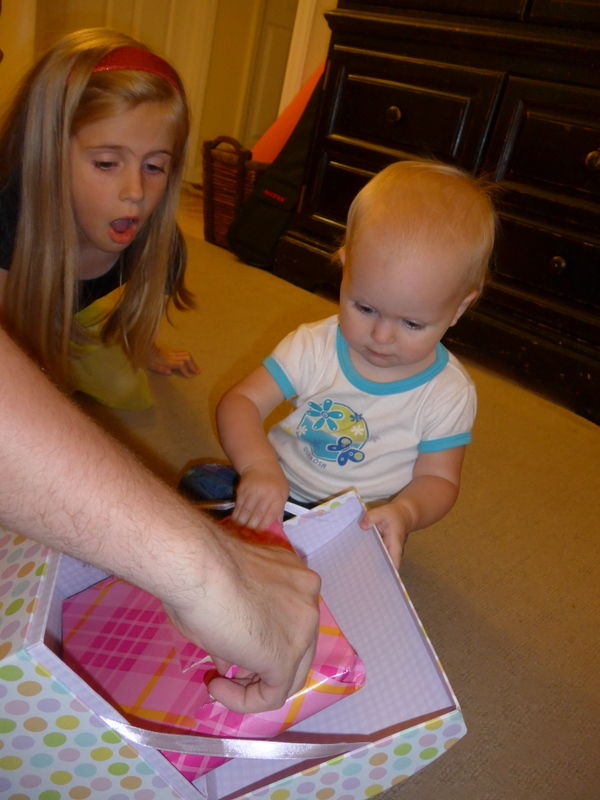 Mom and Dad got her an alphabet book, too! It's called Alphaprints and the illustrations are made from fingerprints, which are embossed so they're fun to touch. 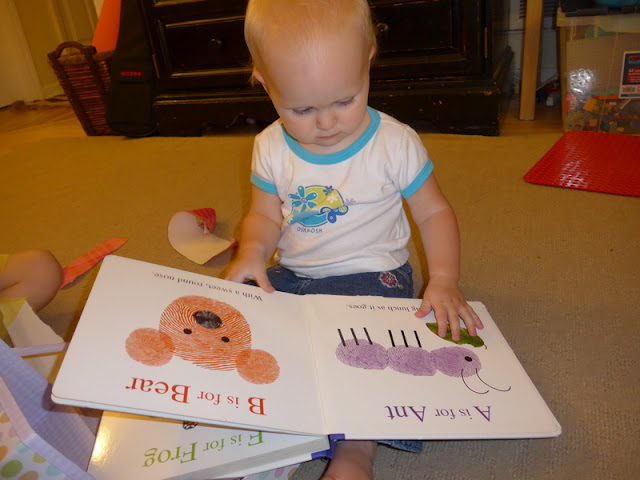 Here she is opening her present from Grandma and Grandpa (obviously Andrew's parents since my mom just got hers in the mail today): 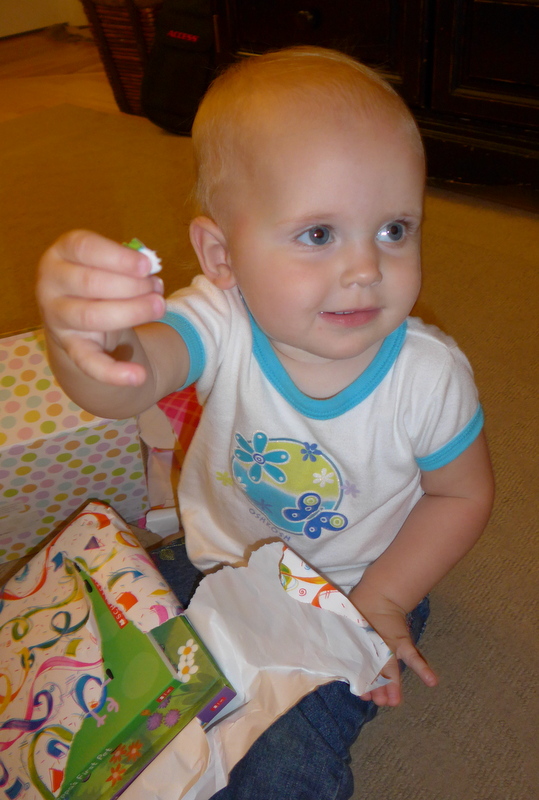 She kept ripping off tiny pieces...to put in her box, of course... 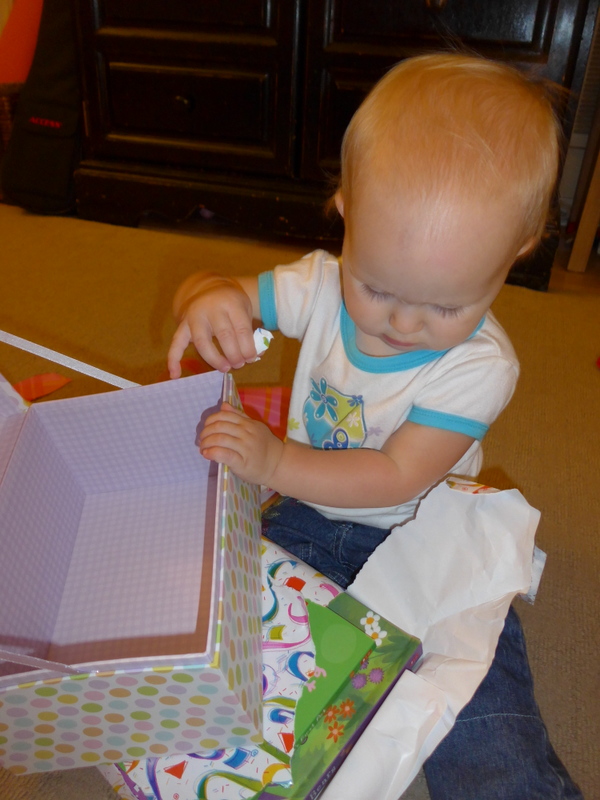 But what's inside, Zoë? 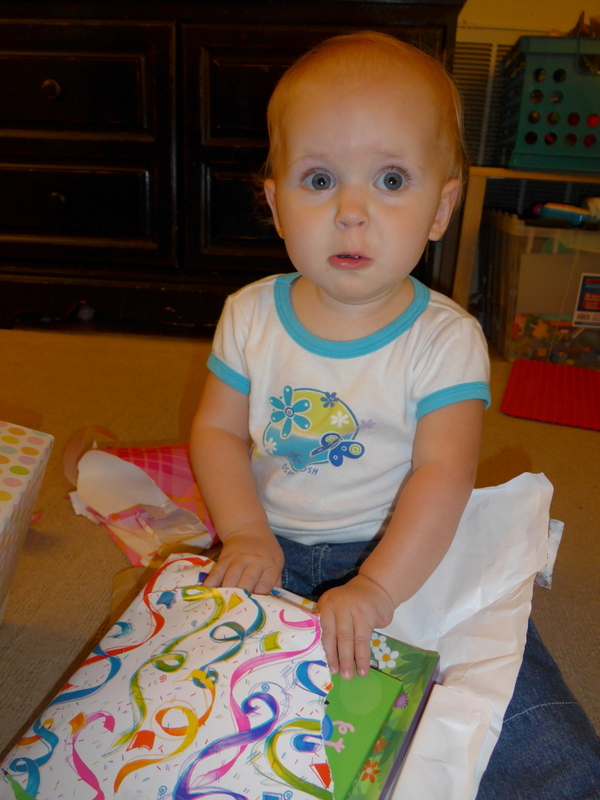 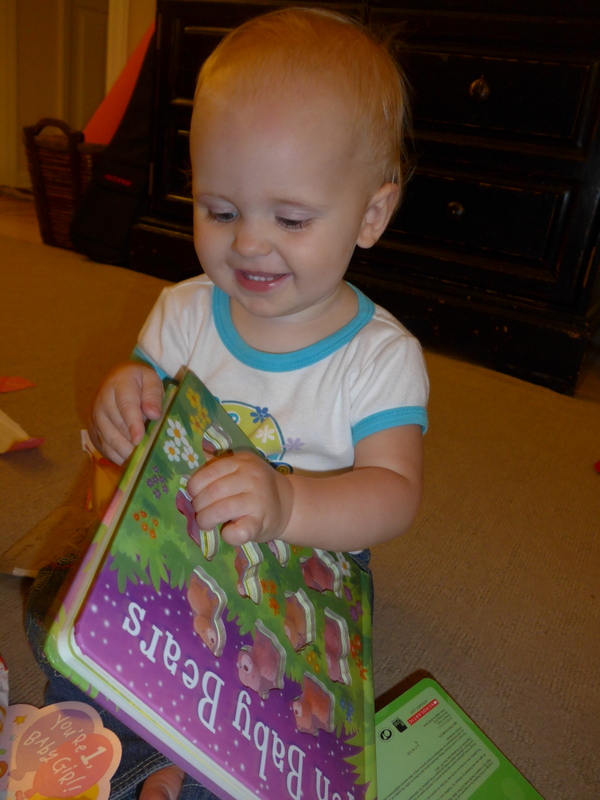 She got books, books, and more books for her birthday (oh, and chased by a pit bull, but that's another story)! What could be better? I suppose cake could make things better. 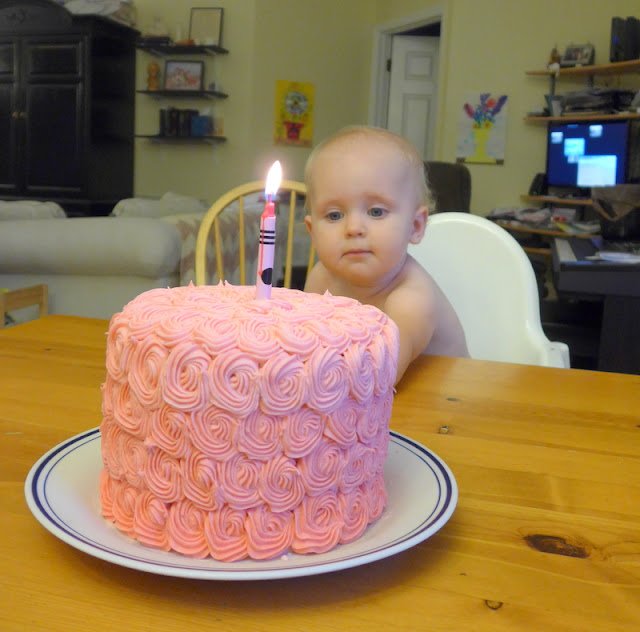 Since my sleep tank is pretty much empty I settled on a fairly easy design but still managed to botch it! I strayed from the American buttercream icing I'm used to working with and instead made an ermine buttercream. From my research, ermine is supposed to hold its form better at room temperature when piped. This was not the case for me at all! I'm sure I did something wrong but I'm not sure what. My icing was far too runny so all my rosettes ended up looking a little flat and oozy. 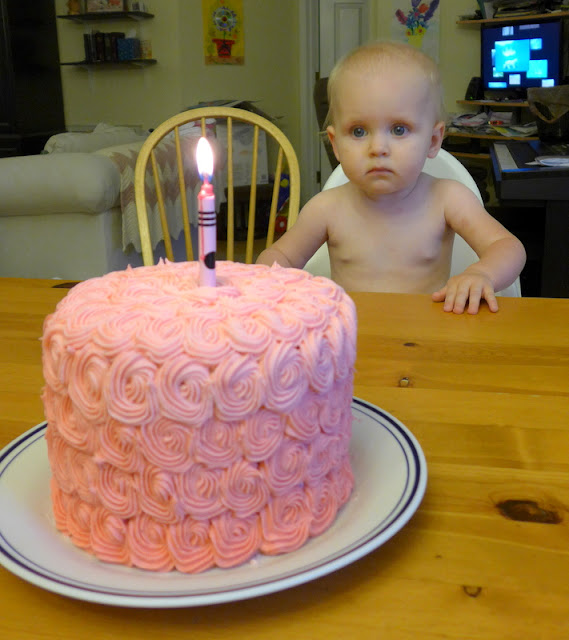 The upside was that it was certainly very yummy and tasted much less sweet than regular ol' buttercream, which is what I was going for.

Here are all the kids together before digging into the cake (Zoë was nervous to have Benjamin so near): 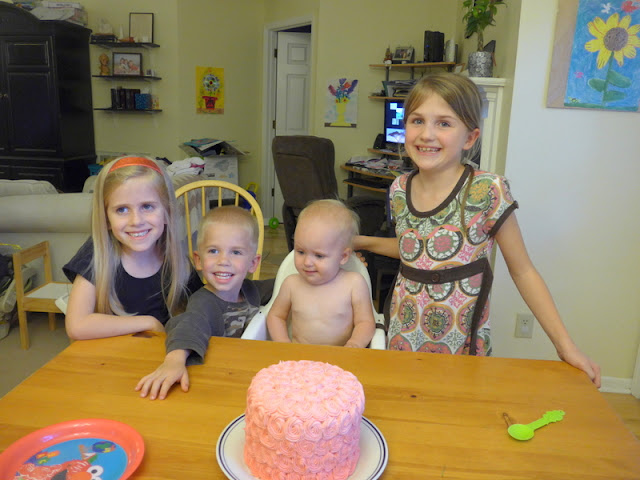 It was supposed to be an ombre cake but my gradient was a little too subtle. Perhaps if you look really carefully you can see that it's lighter on top and darker on the bottom. 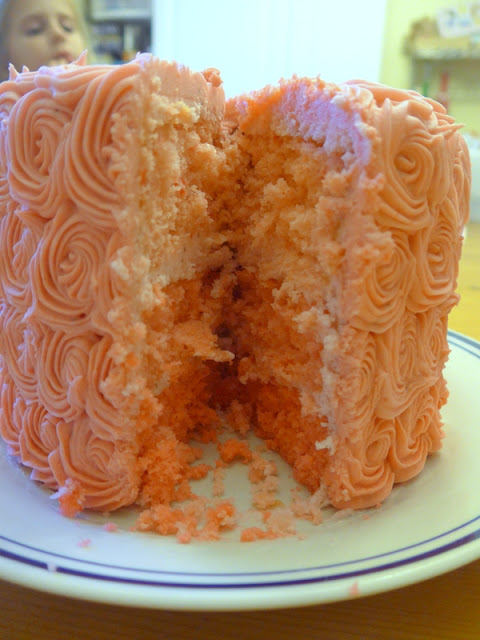 This led to a beautiful discussion about ombre, its meaning and related words. It means shadow. Andrew talked about the moon and its shadows. Rachel came up with the word umbrella, which, yes comes from the word umbra.

"Do you know what umbrella is in Spanish, though?" I said since we were discussing Latin roots. "Paraguas. It means 'to protect from water.'"

"But why?" Rachel wanted to know. "If both words came from Latin roots then why are they so different?"

"Who knows?" I said. "They just ended up with different names in different places."

"But we do have parasols," Andrew pointed out, "to protect us from the sun," which is fabulous because in Spanish you say sombrilla.

Way to confuse us all, languages.

Anyway, here's Zoë messing around with her cake before finally trying it: 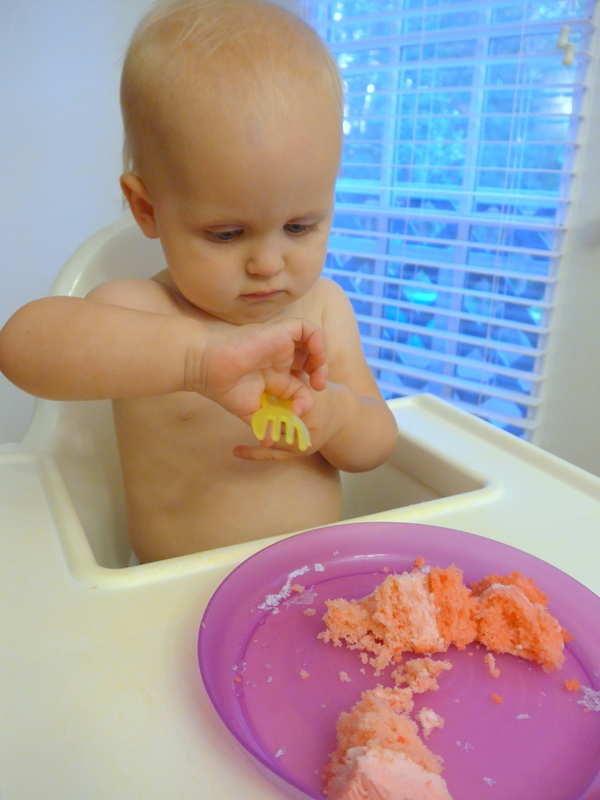 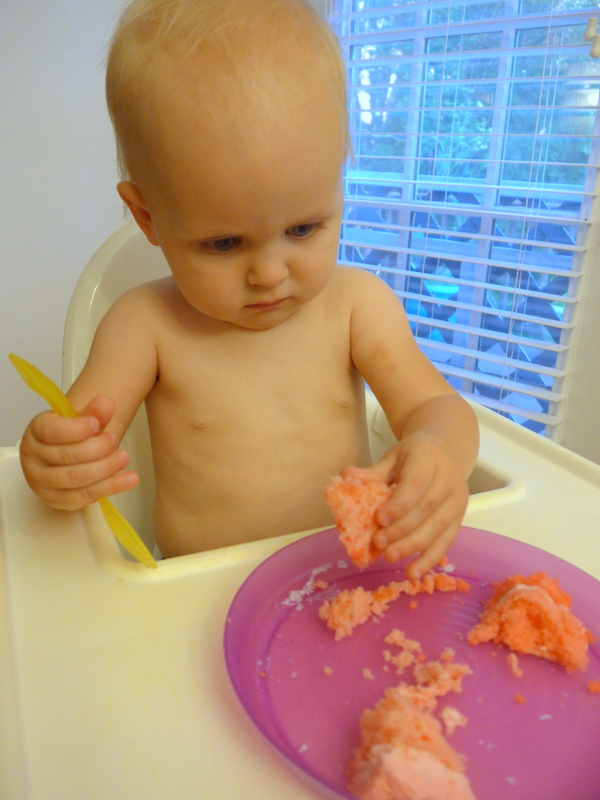 She made good use of her fork. 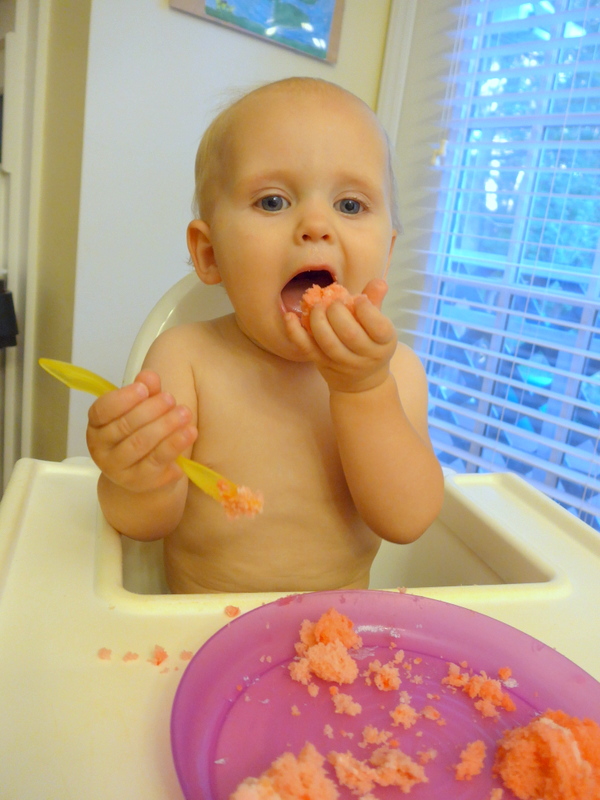 She wasn't too sure about the taste at first (she's always wary of first tastes; remember her very first food ever? This face made me think of that)): 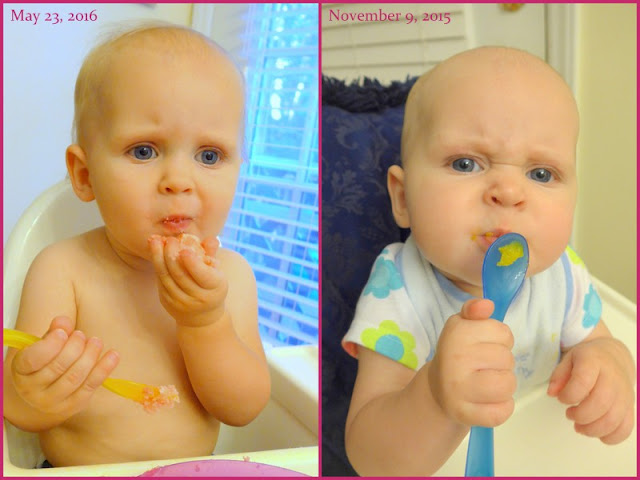 But here she is warming up to the idea of cake: 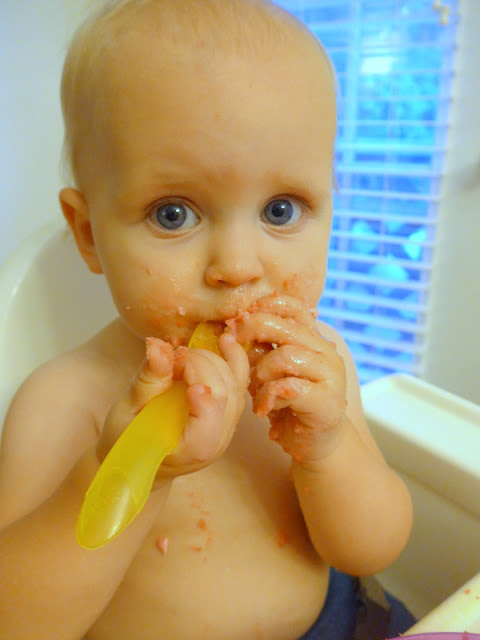 As well as the concept of a fork: 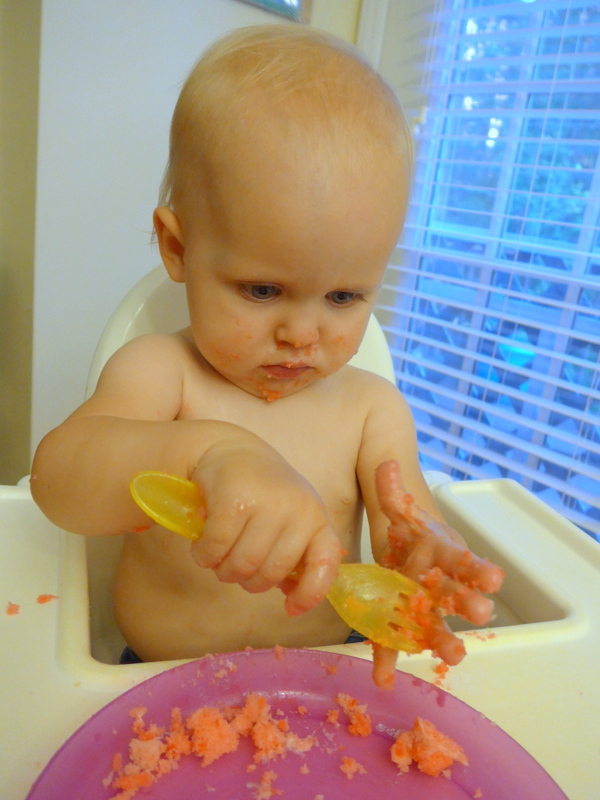 All in all it was a very happy first birthday! 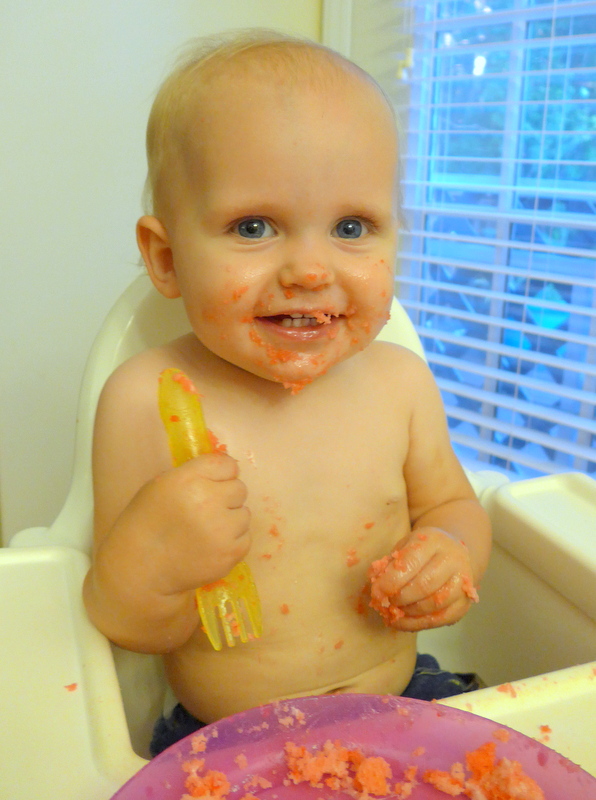