Field day with 8/9 year olds is a whole lot easier than field day with 6/7 year olds! From dividing them into teams to celebrating with freezies the whole day was easier. Kids do a lot of growing up in such a short amount of time. They followed directions and I wasn't worried about losing any of them. Benjamin was eager to join in the activities; he knew just what to do since he'd spent he whole day yesterday figuring out what to do.

Here he is at the balloon toss station: 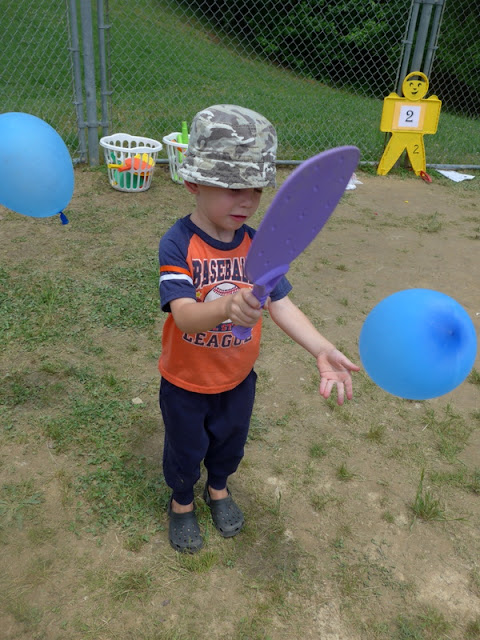 He shadowed Rachel quite closely, a little too closely... 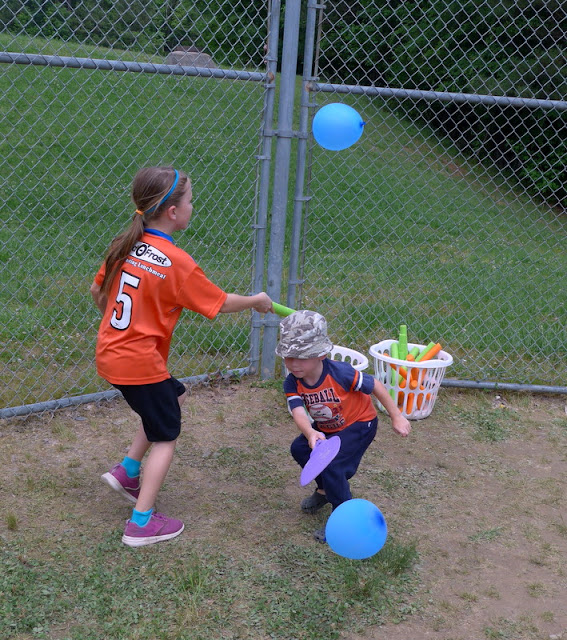 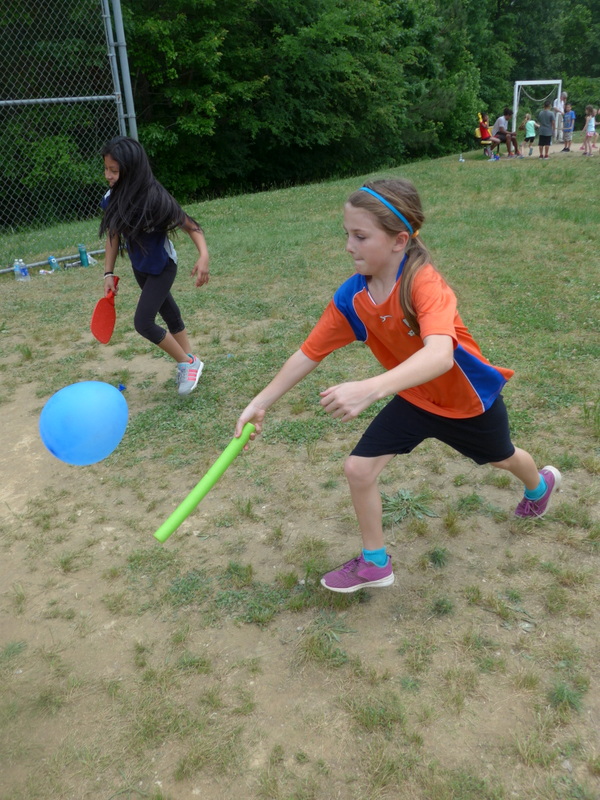 When Miriam's class came outside for recess I left for a minute to say hello to her and met a sad, sad Benjamin on my way back. He was crying and holding his face. "I got hit by a racquet!" he wailed.

I got him quieted down, he took a drink of water, and although it didn't look very bad I put a bandaid on his owie. It got worse and worse through the afternoon and was pretty swollen by the time Andrew came home, but it's looking better again already. At the dinner table it came out that Rachel had been the wielder of the racquet that delivered the blow (she apologized profusely and insisted that she made sure Benjamin was alright after she hit him and before sending him in my direction). 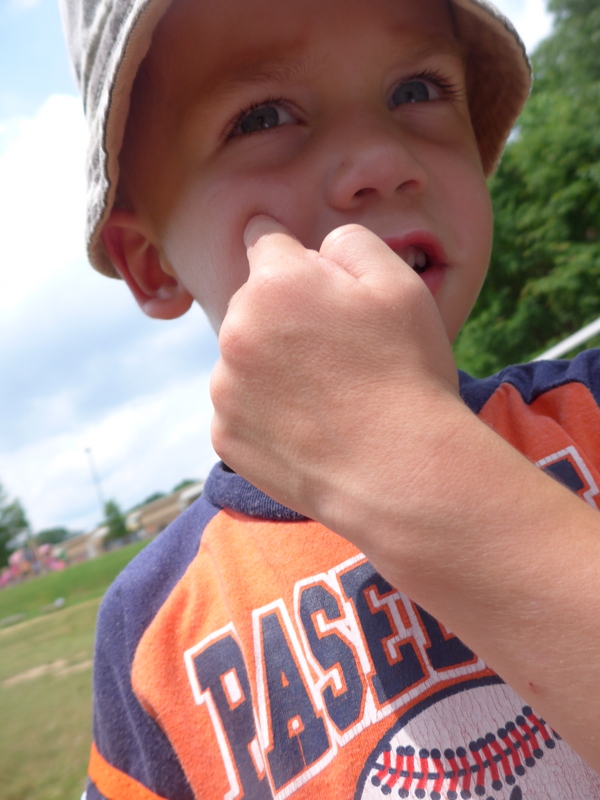 Here's Zoë answering the question, "What's in your mouth?" 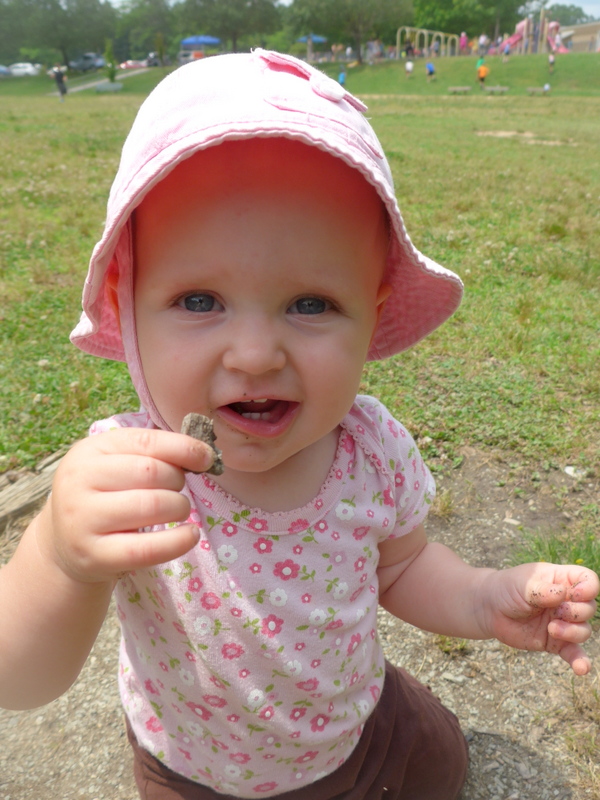 And here she is playing with the parachute: 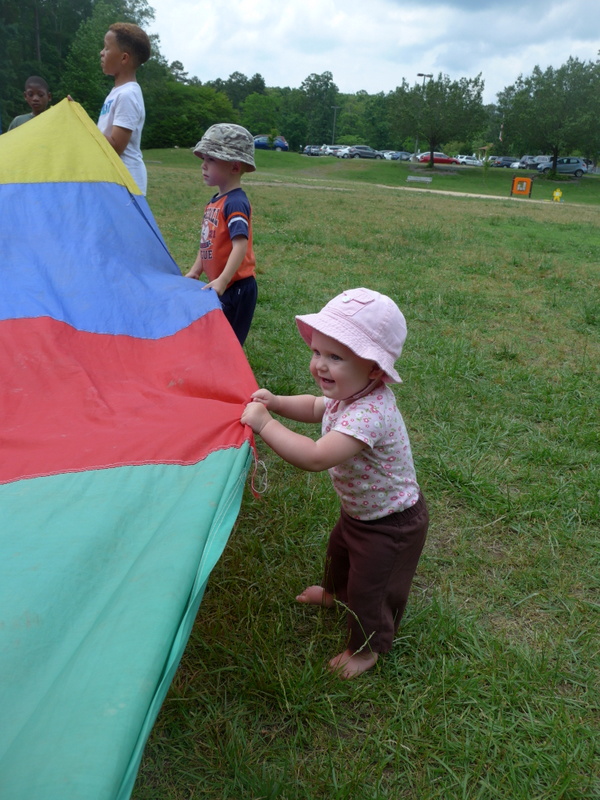 She had so much fun holding on and shaking while the kids were playing "popcorn." She wasn't able to play all the parachute games because they were too complex for her (Lift it above your head, walk underneath, and sit on the edge? That's a bit much for her at this age. Holding on and shaking? That was just her speed).

Here's Rachel in the aftermath of the game UFO: 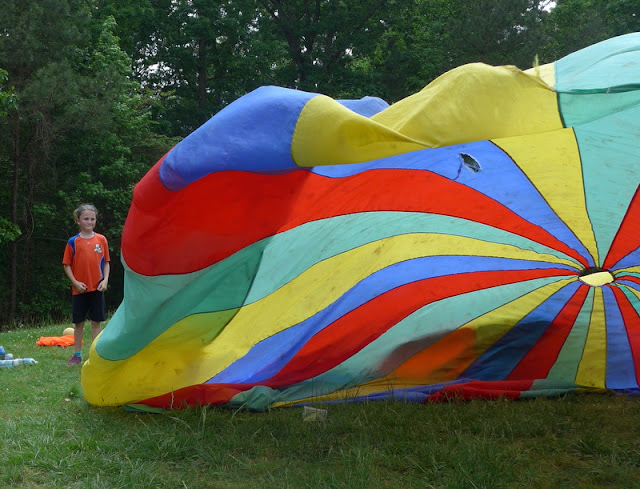 Here's everyone getting ready to make a circus tent (Benjamin and Rachel are wearing orange): 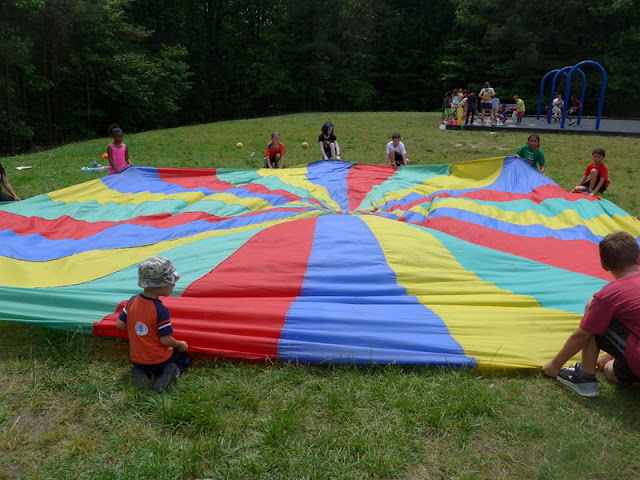 And here they are going inside: 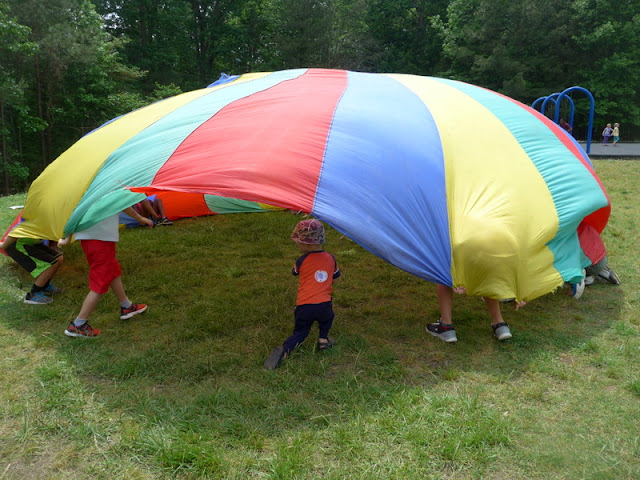 At the memory station the kids had fun fawning over Zoë (there are only so many times you can play memory, I guess, before you simply must move on to something else): They were offering her flowers and tickling her with grass. They think she's great!

Here's Benjamin playing the Robot Reboot game (everyone carried around a beanbag while they climbed on the playground; if their beanbag fell then they "ran out of battery power" and had to call for help until someone handed them their beanbag (you couldn't pick up your own bean bag but you could pick up anyone else's)): 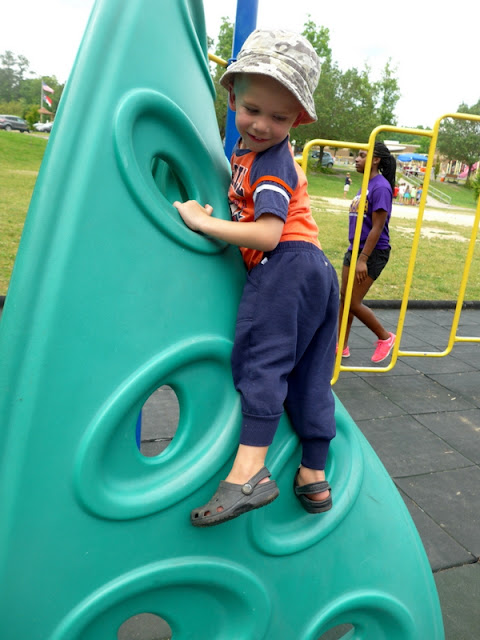 Here's Zoë chewing on another rock: 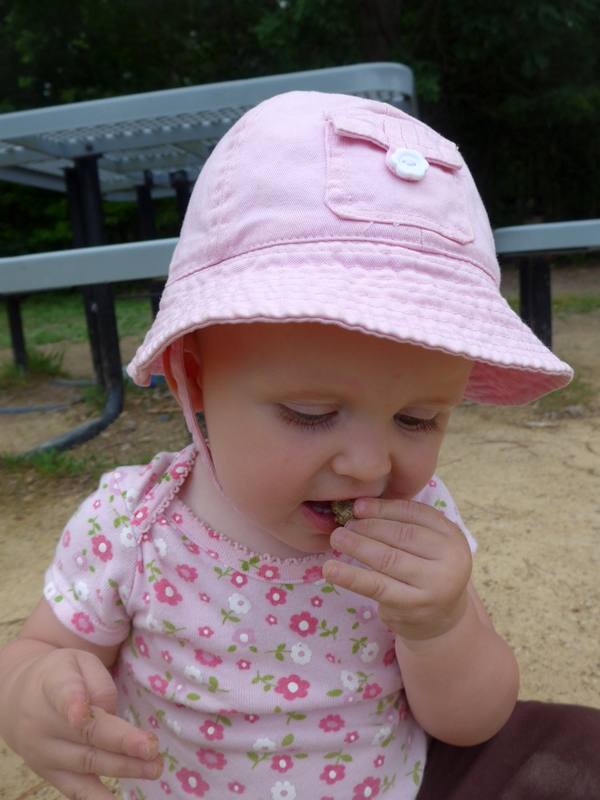 Here are Benjamin and Rachel at the big frisbee station (this was also a favourite): 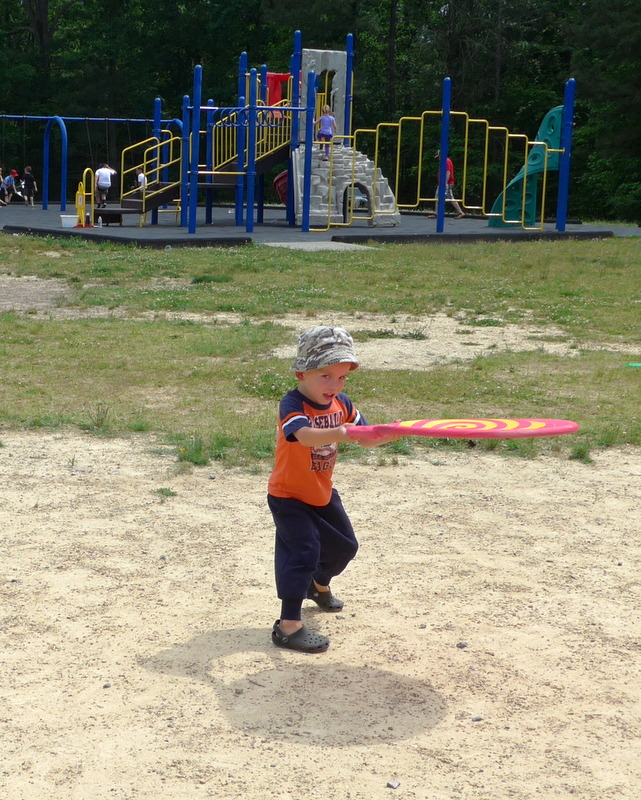 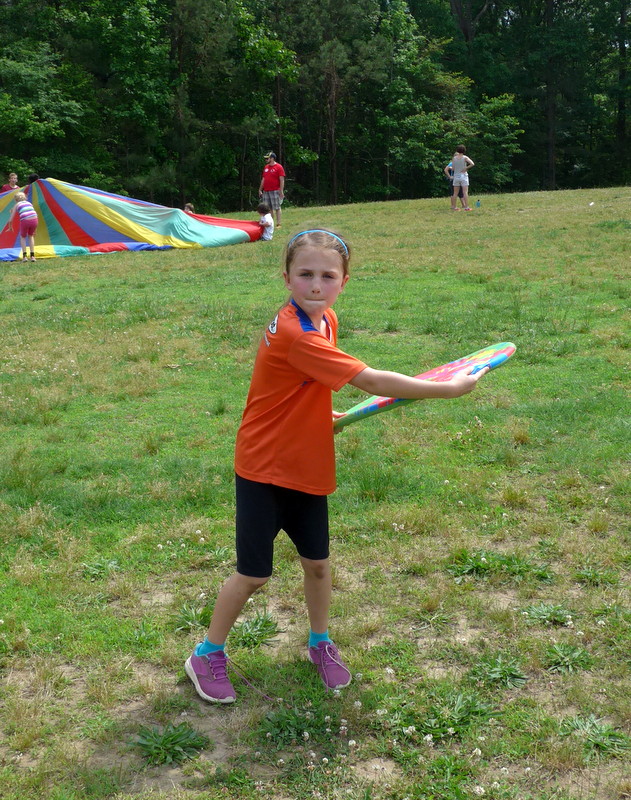 At the end of the day we had to visit the chicks in Miriam's classroom, of course: 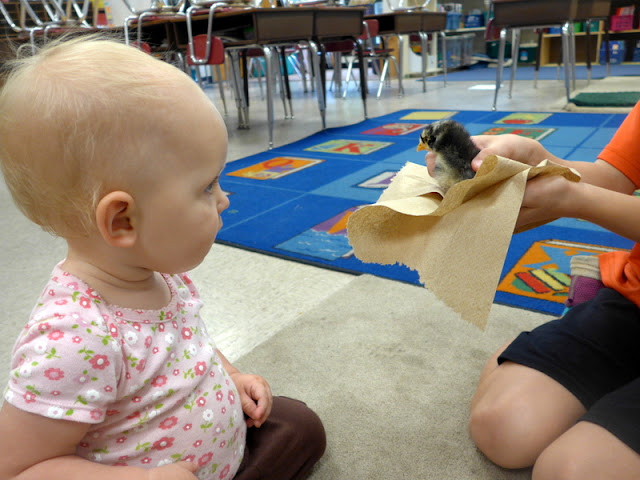 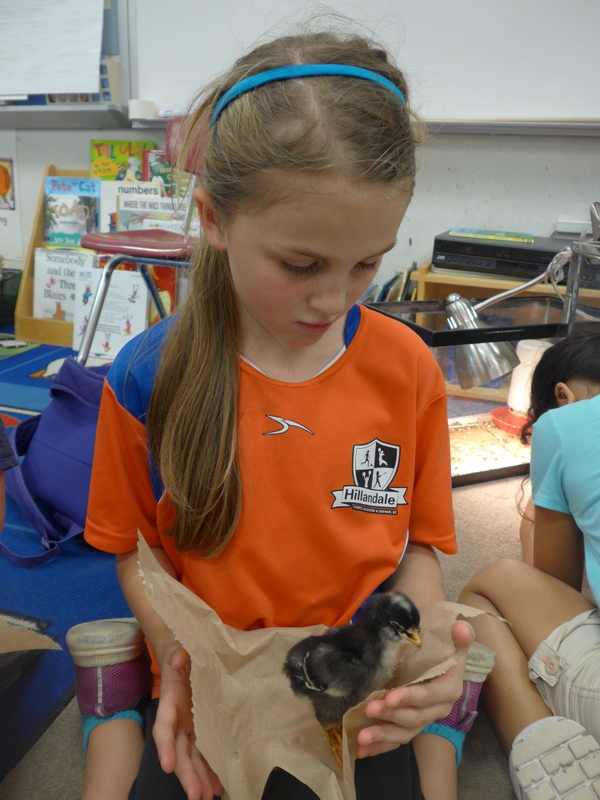 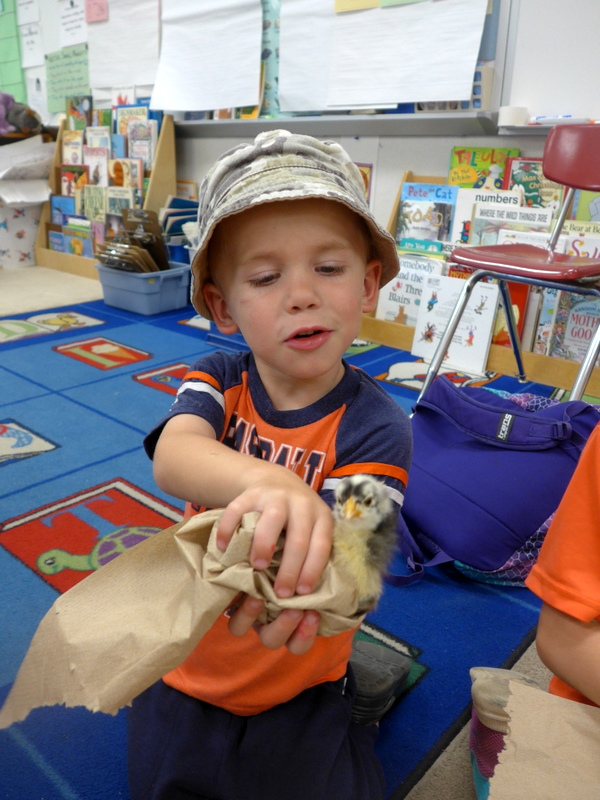 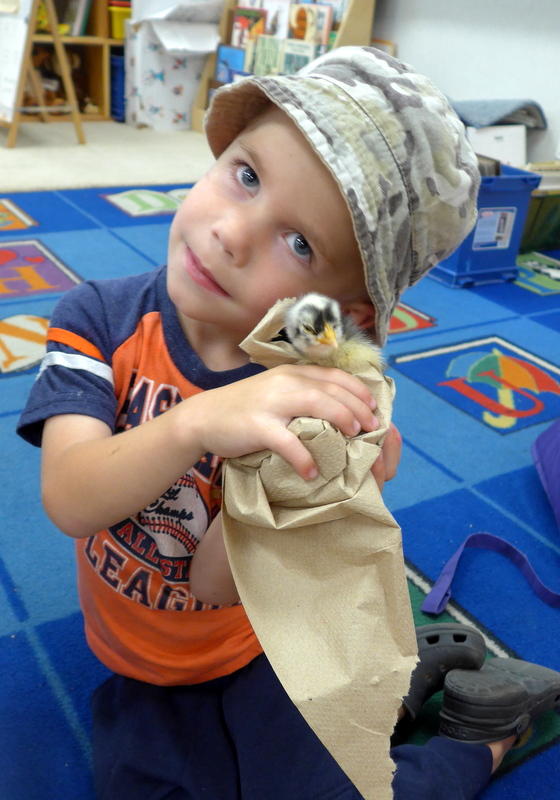 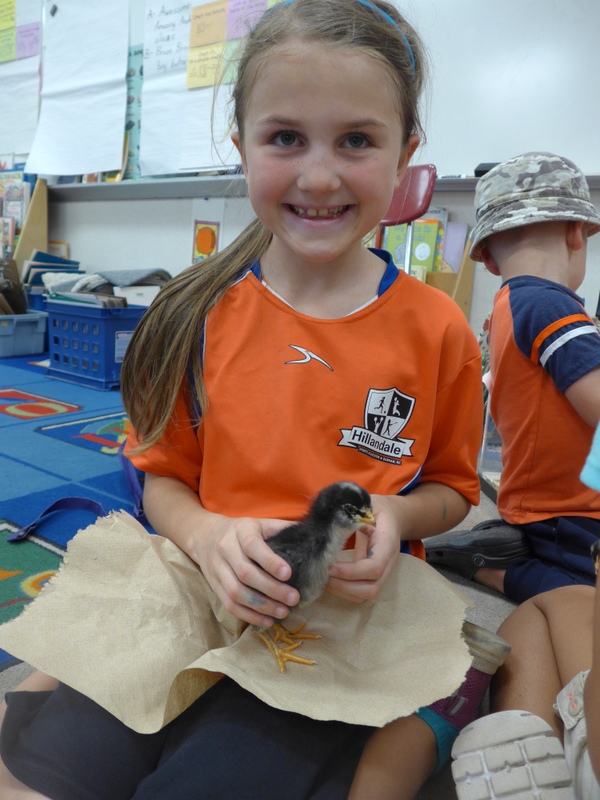 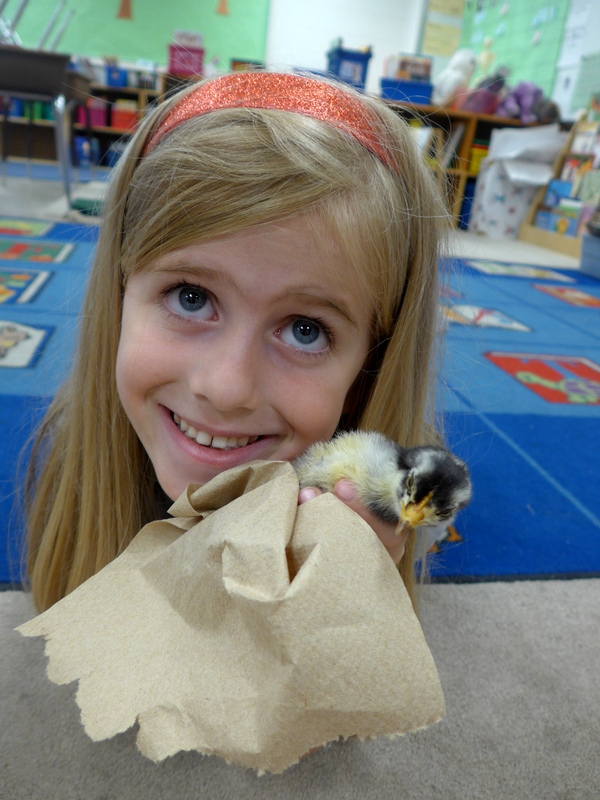 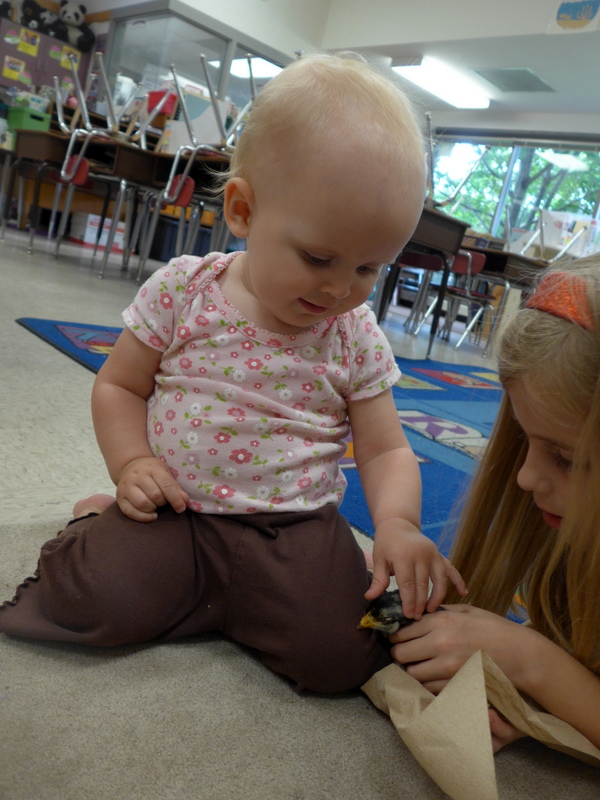 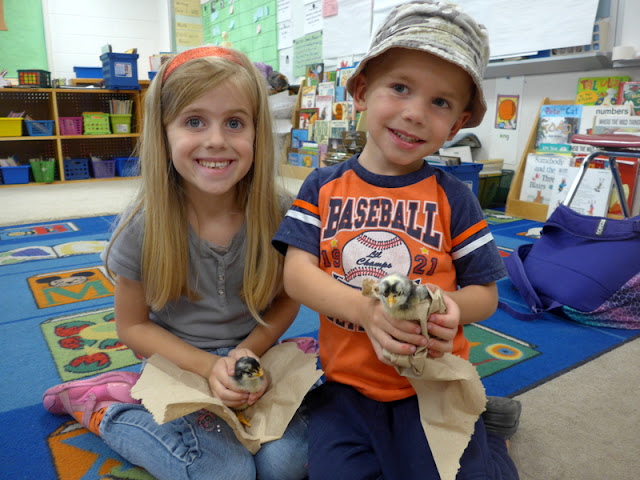 While we were playing with the chicks Miriam's kindergarten teacher stopped by to see them as well and then invited us over to her room to visit her new guinea pig (and look at her poison dart frogs and the toad her class caught earlier that day).

The K-1 hallway is a veritable petting zoo lately!
Posted by Nancy at 11:30 PM