For Mother's Day I decided to give myself an eye exam. My glasses are several years old (five? six?) and they've been giving me subtle signals that they'd like to be replaced (for example, they fly off my face at random). Technically I suppose I should be having my eyes examined every 1–2 years, so I've been running a little behind schedule.

I scheduled an appointment quite a while ago when I was expecting Zoë but ended up cancelling the appointment because I was having a terrible couple of days and didn't feel like I could make it through an eye exam.

I rescheduled about six months ago but ended up cancelling that appointment as well. My grandma passed away and my eye exam was scheduled for the very same weekend of her funeral.

So the very fact that I made it to the appointment at all is a bit of a miracle.

The good news is my prescription hasn't changed! It's been the same for about fifteen years now—my vision is rather terrible, but holding steady.

The bad news is that I have dry eyes, apparently.

"You don't want a contact exam, do you?" the doctor asked.

"Good," he said. "Your eyes are so dry; I don't think you'd be a good candidate for them."

Good, because I didn't ever like contacts when I did wear them...probably because I have dry eyes.

The kids had fun helping me pick out new frames.

We went out for lunch at Moe's because Miriam had earned a certificate for a free meal at school somehow, and then we stopped by Duke Gardens to take a little walk... 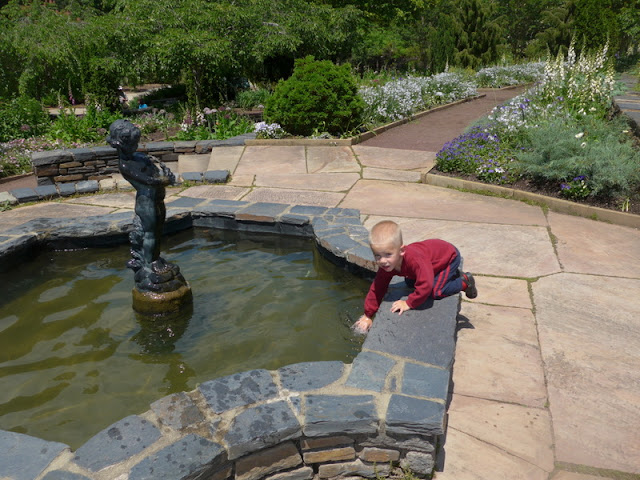 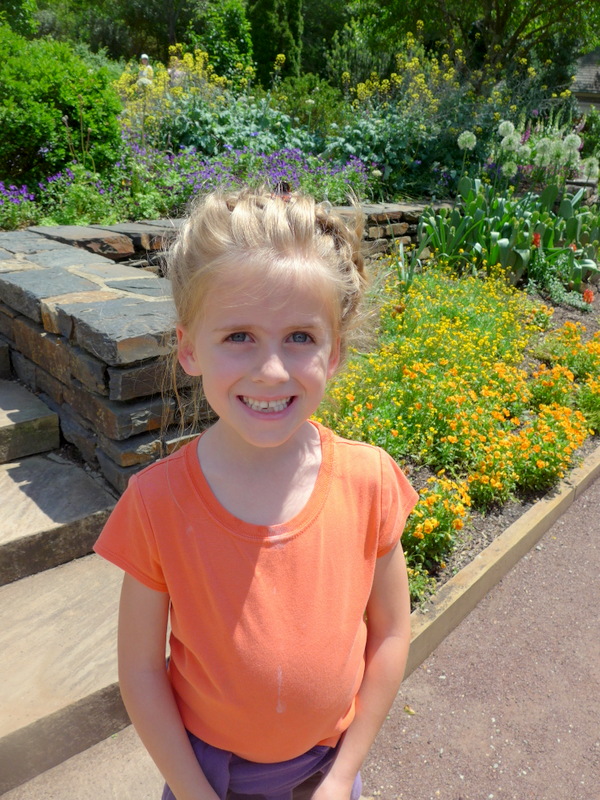 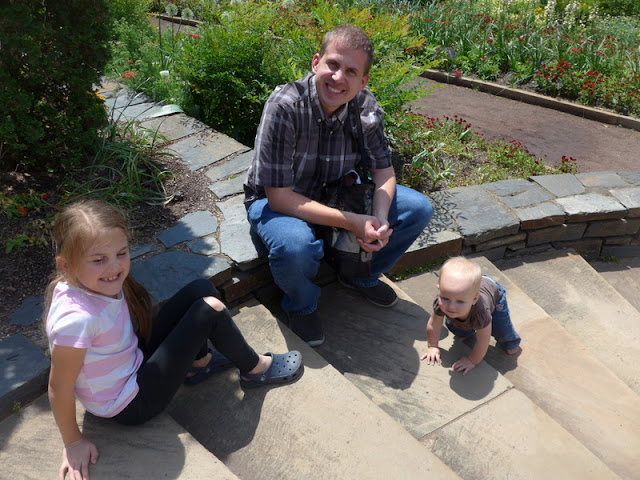 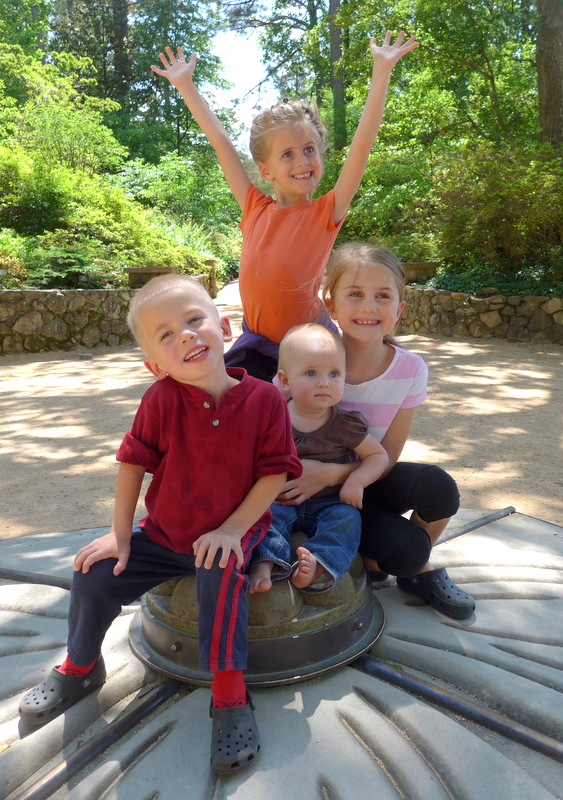 And then Andrew and Benjamin dropped us off at a friend's house so we could carpool down to Raleigh to play a game of miniature golf at Frankie's Fun Park. Rachel became good friends with a little girl, Riley, in our stake over the course of the musical and they were both so sad when the musical was over. Riley recently had her birthday (well, it was in March...but who's counting) and to celebrate her Mom decided she could take some friends out.

Riley's family recently moved to the neighbourhood some of our school friends live in, including our friends Katie and Julia (their mom is the assistant in Miriam's classroom). So they were invited, as well as another family in their neighbourhood with two little girls around Rachel/Katie/Riley's and Miriam/Julia's ages. It was a good mix of girls. Oh, and I brought Zoë along and Riley's little sister Aubrey (who is 1.5 months younger than Zoë) came along, too, so even the babies had a friend to play with! 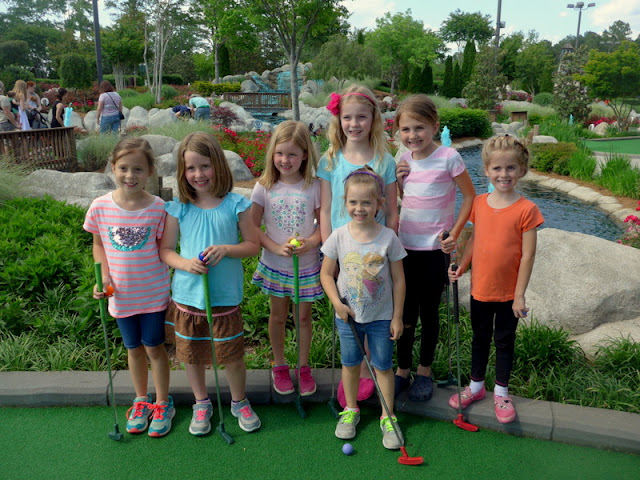 It was fun to watch the girls play through the course. Our scorecard was mostly 5s (the maximum number of...hits...allowed), a smattering of 2s, 3s, and 4s, and a sprinkle of hole-in-ones (which were always very exciting). We only lost one ball for good, though we temporarily misplaced many more. A fun time was had by all, even the mothers, who happily chatted about this and that as we followed behind this giggling gaggle of girls. 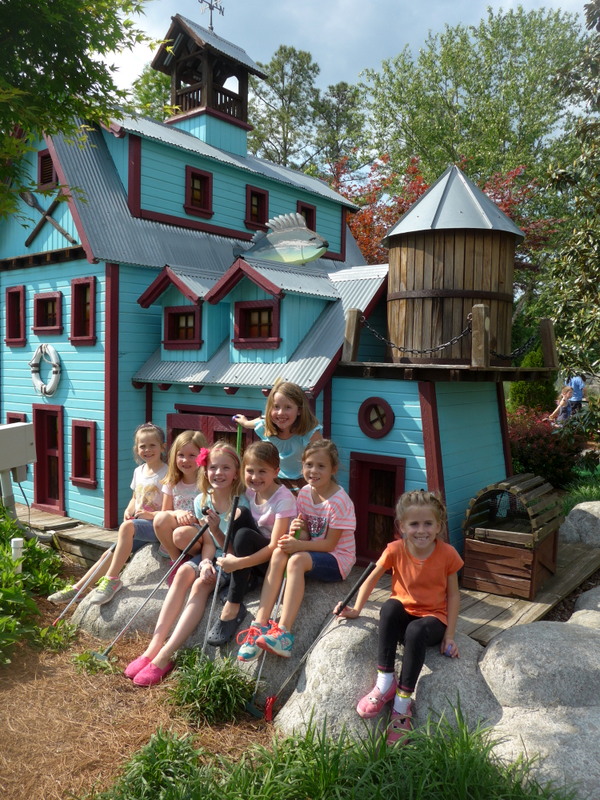 The last thing Benjamin said to me was, "Can't I hang out wis Miss Beckwis, too?"

He spent the whole afternoon yesterday at school "wis Miss Beckwis" so I think he'll get over the disappointment of not spending this afternoon with her.

Suzi (known to Benjamin as Miss Beckwis) was quite surprised when I told her that the girls and I were in a musical together and that that musical was Chitty Chitty Bang Bang because, she informed me, her neighbours, who were Mormon, were in the musical Chitty Chitty Bang Bang. She asked if I knew them, and I didn't, and then I had to explain how wards and stakes work (wards are small units, which are contained in a stake—so her neighbours (who I obviously did later meet—because she was talking about Riley's family)).

Then she said, "She has a baby right around Zoë's age. Her oldest is sixteen. She has eight kids. Can you believe that?!"

"I'm not sure you're getting this," Suzi said. "Eight kids! A sixteen year spread!"

"I really do get it," I assured her. "There's a sixteen year spread between my youngest and oldest sisters, though there are only six of us."

"Suzi, I'm Mormon," I laughed. "Large families don't shock me. My grandma was one of twelve. One of my mom's cousins has thirteen."