Benjamin spent a happy few minutes pushing Zoë around the yard on this little toy tractor. Unfortunately, when I ran to get the camera (quick—they're getting along!) he decided that instead of pushing her he'd instead sit on the tractor with her. She was not impressed. 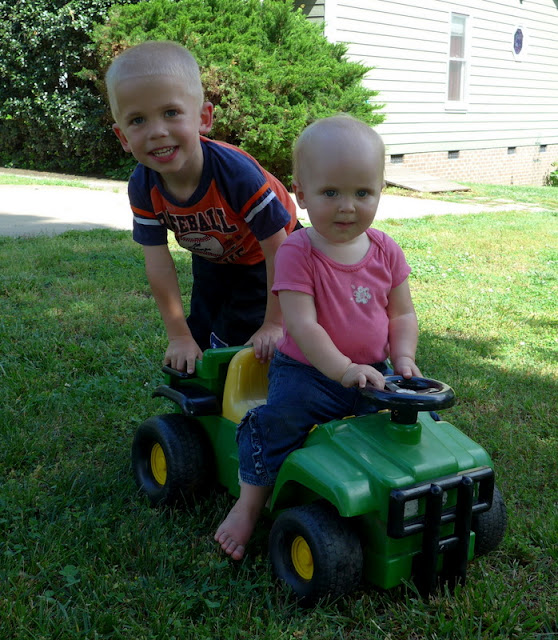 Though they've been known to equally enjoy a good wrestling match in the living room (Zoë is tough), these two are rather opposite in temperament.

(Clearly we gave Benjamin a haircut (the first two pictures are from today and the pictures below are from yesterday (Andrew cut Benjamin's hair after dinner))).

Here's Benjamin running around on the playground like the wild hooligan he is: 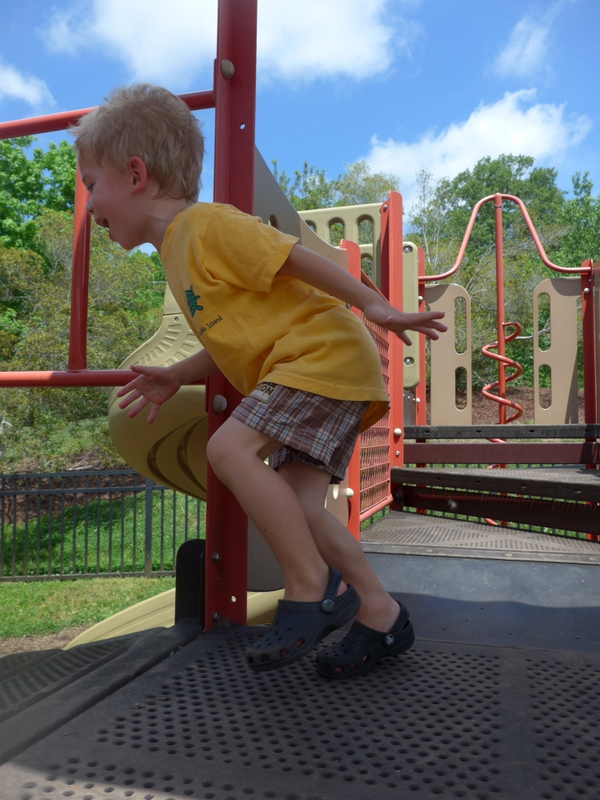 He's so animated you can almost hear him screaming in the picture. 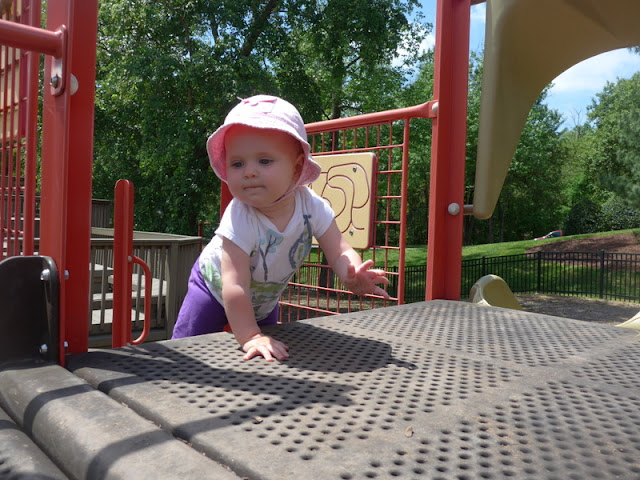 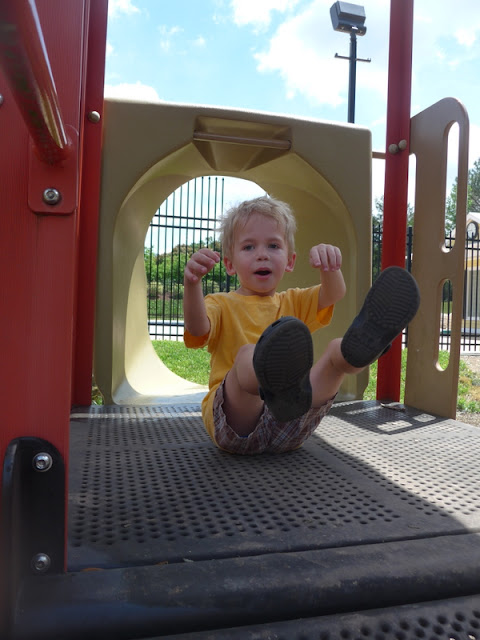 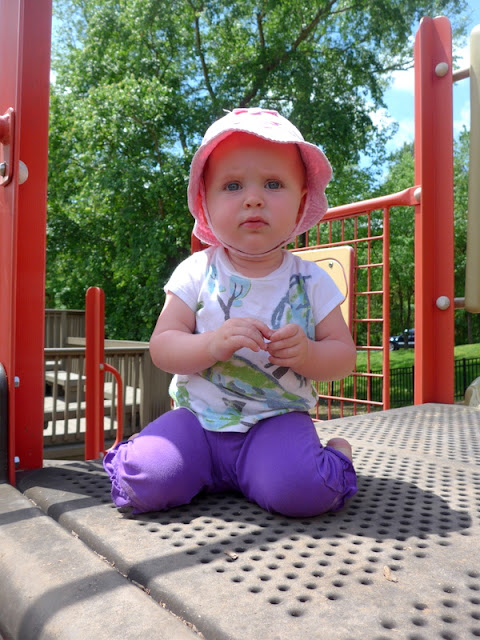 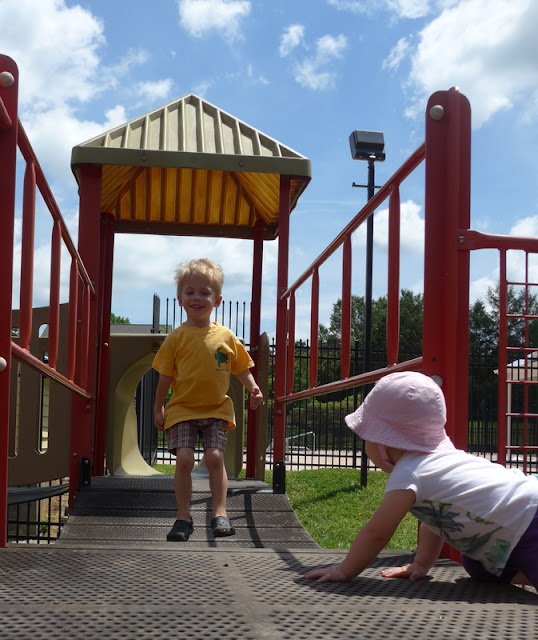 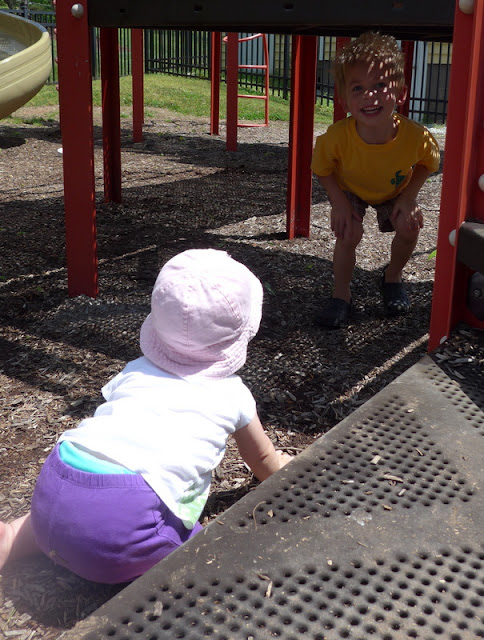 Two seconds after I took this next picture he ripped that hat off her head, twirled it around in the air, and then launched it as far as he could for no apparent reason (other than that he's Benjamin). 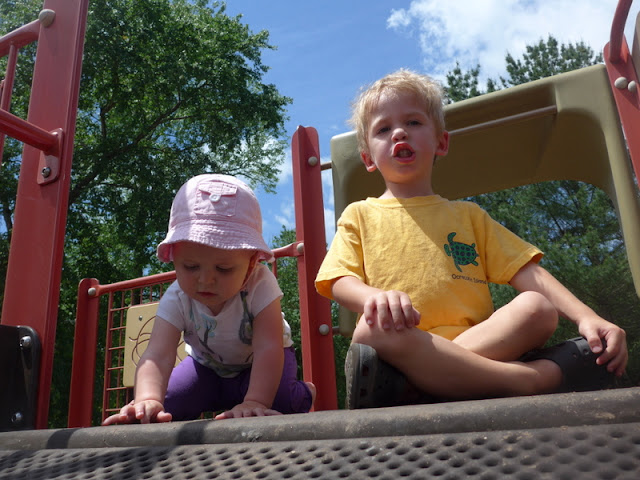 I finally got some smiles out of Zoë when she was safely tucked away in the baby swing (but only after she made sure Benjamin was trapped in the other one). 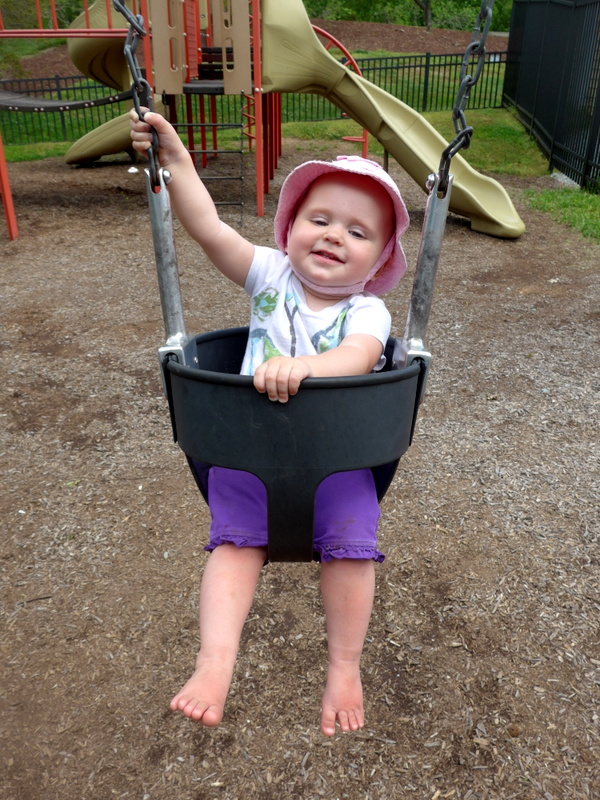 It's not all that often you get all this craziness in one location. That's called Benjamin! 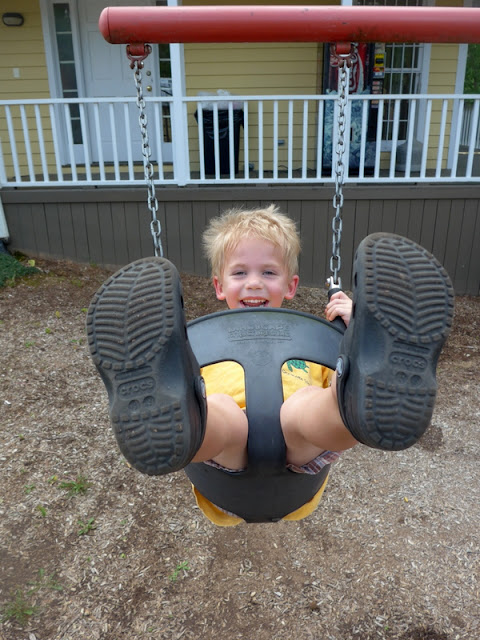 It's fun to watch them play together the few times during the day that they aren't tormenting each other. Just the usual stuff—you know, she's always knocking over his towers and things and he's always knocking her over. To be fair to Benjamin, Zoë can be quite retaliatory and has been known to bite and kick and hit and pinch and scream when she feels she's been wronged. To be fair to Zoë, we usually find her actions to be quite justifiable. I don't condone biting but for crying out loud stop putting your fingers in her mouth! What's that? You're crying because she's strapped in her high chair and managed to pull your hair. Well, dude—what was your head doing so close to her hands?!

I can't even tell you how many times a day I say, "Leave the baby alone!" Not that I can blame him for wanting to be with her (touching her (tormenting her)) all the time. She's pretty darn cute! It's a good thing he's cute, too! 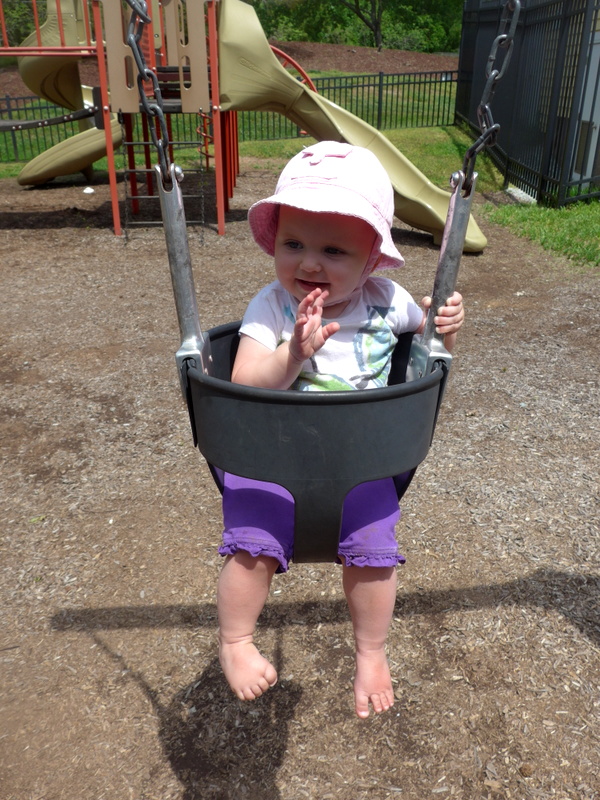 While we were crawling around on the freshly painted clubhouse veranda we noticed this assassin bug look-alike. From what I can tell it's not actually an assassin bug. Rather, it's some sort of leaf-footed bug (note its enlarged hind legs). I had to take a picture so that I could identify it once we got home because there's this type of assassin bug called the kissing bug that carries a parasite and I almost thought this was one (but it's not).

I've found assassin bugs around our house but they've always been wheel bugs, not kissing bugs, and wheel bugs are easy to tell apart from kissing bugs because they have a big knob resembling, well, a wheel on their thorax (technically pronotum, the part that covers the thorax but I've never used that word until today, just now).

I figured that, having lived and survived here so long without receiving a kiss of death (or even hearing of kissing bugs), incidences were quite uncommon. But reading up on it wasn't very settling. The CDC's all "they're everywhere!" And this place is like, "Whatever you do, don't touch it! Clean everything with bleach!!" Even Snopes was like, "Yeah, that's true (but we won't tell you until halfway down the page that contracting the parasite is super rare)."

So if you read anything, read this article. It's by an actual entomologist, who gave wonderful tips for properly identifying an assassin beetle, as well as dispelled trumped up fears in boldfaced font.

...our native kissing bugs are rather courteous and discreet with their excreta—they most often wait until they leave the host before defecating. This is thought to be the main reason why the disease is not common in the United States despite the bugs, disease and reservoir animals being present. In fact many kissing bugs that are tested for the disease have it, as do local mammals. But humans are not a preferred host and are not typically exposed to the parasite-riddled feces. Thus, the species native to most of the United States are not considered vectors of the disease to humans.

Thanks for not pooping at the dinner table, native kissing bugs! You possess skills that my nearly-four-year-old has yet to master!

* So, about a month ago my mom's cousin (C.L.), who lives a little south of Edmonton, Alberta, remarked on the warm—and surprising early—spring they were experiencing. "I've been sitting on my back deck absorbing the sun and enjoying the new green. Deep in thoughts I have found this to be healing," she said. "Then it dawned on me why I find this so comforting and healing. I grew up with the wind bursting through the trees making them dance and sing their melodical song. Once a southern girl always a southern girl. Ah, a moment of nature's peace (how be it windy)!"

I had to laugh about where my mind took me when she called herself a southern girl because to me—now—southern doesn't mean Southern Alberta (even though I'm a Southern Alberta gal myself (this particular cousin and I share the same birthplace (as so many of our relatives do)).

It means here, a good thousand miles (and then some) south of where she stood at that very moment (an approximate latitude of 53 for her and 35 for me).

I suppose "south" is relative. I'm just grateful that I'm not so far south as to be in a place where kissing bugs poop while they eat.
Posted by Nancy at 1:03 AM