Miriam's class had a field trip today at West Point on the Eno's Schoolhouse of Wonder. They bussed the kids out there so it was a much less taxing day than it was when I hiked there with Rachel's class in March! Because of the wet and rainy weather we've been having this week the river was a little swollen so our planned class (exploring the river) was changed to a plant/insect class, which was still fun. It's the same class Rachel did when she was in grade one and I accompanied her class to the Eno.

We did the plant walk first. Here's Miriam holding up a beech nut she found (with the rest of the class hunted around in the dirt for more): 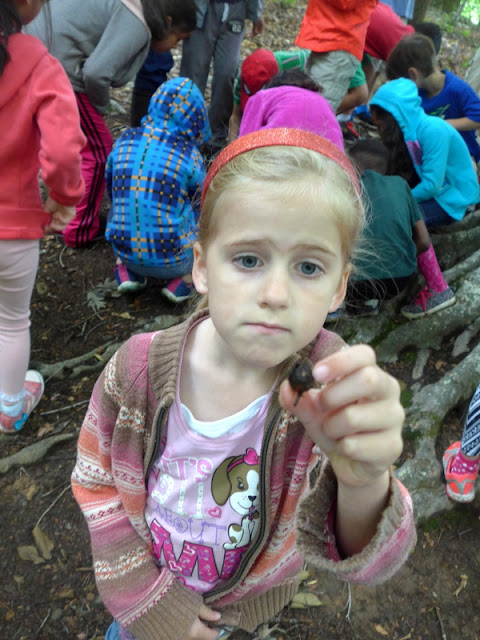 Here are the kids at the...nature hut, or whatever it's called...explaining the benefits of choosing cedar over other wood. It holds up well in all sorts of weather and bugs don't like to eat it, so it's an ideal wood. The hut is made of cedar. 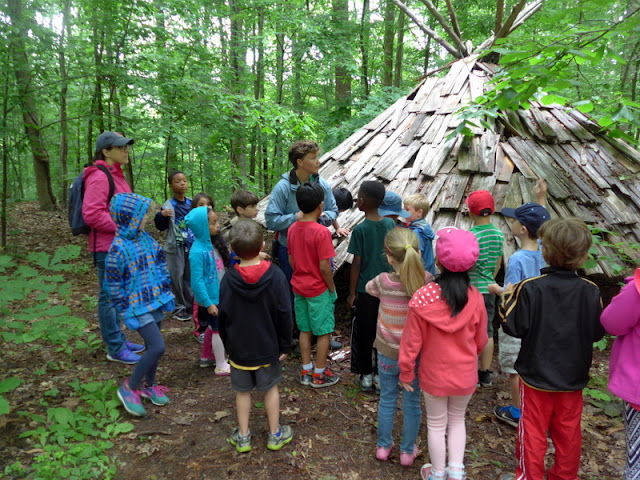 Later we stumbled across some wild ginger (the kids stopped to ask what the plant with the heart-shaped leaves were) so the guide pulled out a little bottle of candied ginger and let the kids try a piece. I don't think a single one of them truly enjoyed it, though I believe their faces were a tad exaggerated. There seemed to be a bit of a contest to see who could overreact the best. (They'd all excel in politics and/or soccer). Here's Miriam's ginger face: 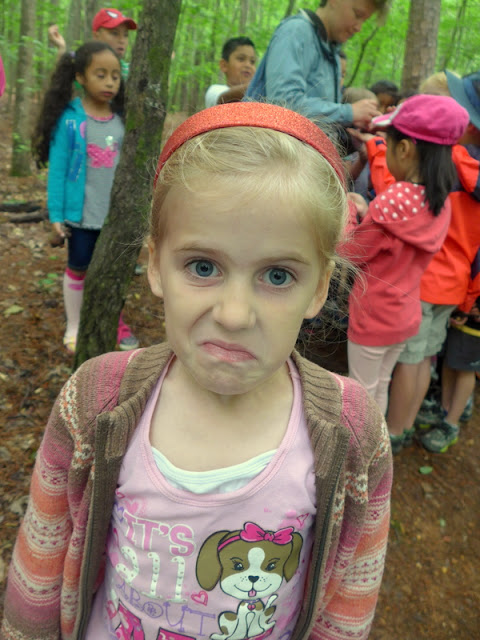 I like how these classes are set up. The instructors are very knowledgeable and instead of always pointing things out to the kids all the time, they kind of wait for the kids to spot something and then talk about what the kids are interested in at that moment, pulling little things out of their (literal) bag of tricks to enrich the experience: candied ginger, maple syrup, dried cherries, a cedar smudge, that sort of thing.

Obviously we came across all of those plants (ginger, maple tree, wild cherry tree, and cedar). We also tried a leaf from the sourwood tree, talked about mountain laurels, and learned about poison ivy.

Miriam's friend Parker had a poison ivy encounter in his backyard recently and is still sporting a lovely rash to show for it, so he was the enrichment activity for that particular plant. "Look what happens if you do touch poison ivy! It's really itchy!"

Our instructor pointed out some jewelweed growing, ironically, in a patch of poison ivy. Jewelweed apparently makes a good poison ivy treatment. Unfortunately (or fortunately, I guess), I don't really know how to identify jewelweed but I'm pretty good at spotting poison ivy. So far we've managed to steer clear of it (even in our own backyard, the borders of which, like Parker's, is constantly threatened to be overtaken by poison ivy).

Here's a picture of Miriam and me enjoying our lunch break (Zoë is there, too; you can just see her little nose): 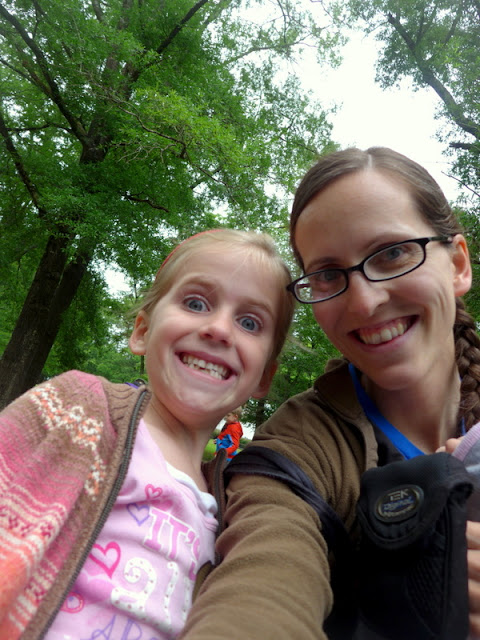 And here are the kids walking along a wall of rocks to burn off some extra energy (because, you know, when you've been hiking around for an hour or so (an have another hour of hiking around to go) there is always extra energy to be burned off): 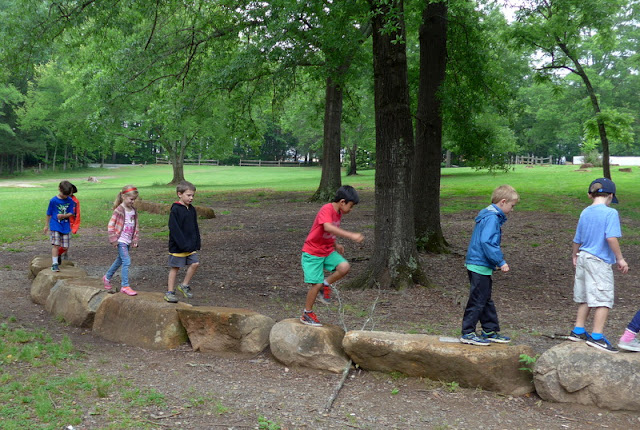 I missed most of the insect walk because I had to hike back to the restrooms with a little girl who refused to go anywhere in the forest. We weren't able to find our group again (by the time we'd hiked back to the facilities and then headed back into the woods our group had moved on) so we eventually decided we'd just join in with the next group we came across.

We did, however, have time to learn that the big yellow and black flatbacked millipedes we see all the time (sigmoria trimaculata) excrete a lovely smell when under stress. If you pick them up (and stress them out) they'll ooze some fluid on you that smells sweet...almost like cherries. Technically this ooze is poisonous, I guess, but our instructor didn't seem too worried to have it all over her hands.

Here are the kids listening to stories at the end of the day (we didn't hear the story of the Tailypo this year, which Miriam was a little upset about because she was so looking forward to that part (Rachel was teasing her about it over breakfast this morning, saying, "Tailypo!" in a quivering, spooky voice)): Instead we heard the legend of Grandmother Turtle.

When it was time to leave, one of the teachers went around to the parent volunteers to ask if we wanted to check our child out (and go home) or have our child go back to school. Miriam was excited about the prospect of being checked out early so I told her that I'd sign her out.

"But we're not going straight home, right?" she asked.

"But can't we go back to school first and I can pack up my stuff and then be checked out early from there?"

(At this point her teaching assistant volunteered to pack up her backpack for her and deliver it to Rachel so that Rachel could bring it home to her).

"But then I'll miss some of school."

"Right. Because you'd be leaving early."

"But then Rachel will have to ride the bus home by herself."

"She'll be fine," I said. "I can let her teacher know so that Rachel won't worry and Miss B. will drop off your backpack and..."

"No, I think I should go back to school."

"What? I want to come home with you, though!"

"You can't do both. You either get on the school bus now, go back to school, and then ride the bus home...or you get in the van and come home with me now."

Oh, man! It took her probably five minutes to decide what to do! In the end she decided to go back to school and ride the bus home. It was nice to get home to a somewhat quiet house. Andrew stayed home with Benjamin (who was a little upset about missing the field trip but got over that pretty quick when we told him he could play with all the choking hazards he wanted (marble run, small LEGO, magnets) in the living room with no baby to get in the way) and Benjamin was excited to get to watch a show while Zoë and I napped.

Zoë had a rough night last night and we were both in desperate need of a nap.

I was having trouble falling asleep (I don't know why because I was so worn out) so Andrew took Benjamin out to pick up some groceries (we usually shop on the weekends but we ran out of flour...and an outing is an outing) so the house could be completely still, which was a lovely treat.