What time is it? Pool time!

The pool opened on Sunday, but, of course, we didn't go. The kids were a little disappointed that we weren't the first crazy ones in the pool (which is always a little bit cold in May) but they were excited to go on Monday. They've been counting down for weeks for this day.

I took the little ones in the early afternoon, just to check it out (and also in case it rained later in the day (we're in for a rainy week)). I didn't pack a swim suit for myself because (a) I was hoping the kiddie pool would be open so I could let them just splash around in there and (b) I didn't think they'd really want to stay that long, but I was surprised on both fronts. The kiddie pool was still closed (they're doing some renovations) so I let the kids play on the steps of the big pool, which, although chilly, was so much fun that these two little ones didn't want to leave. 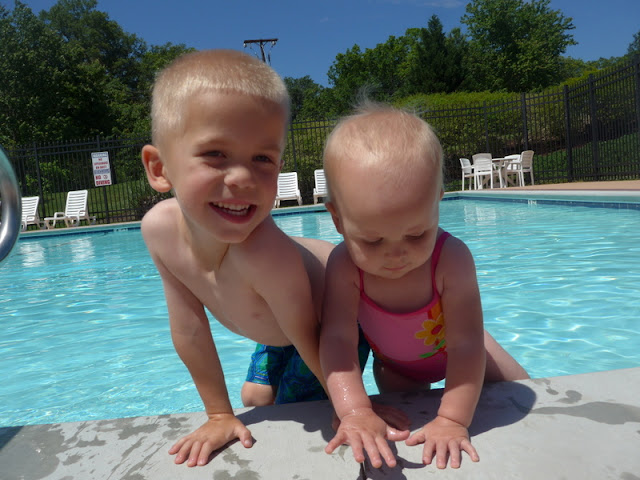 Here they are enjoying the pool: 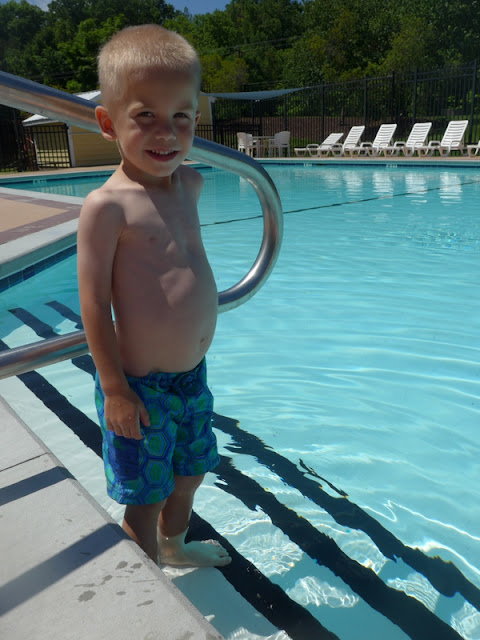 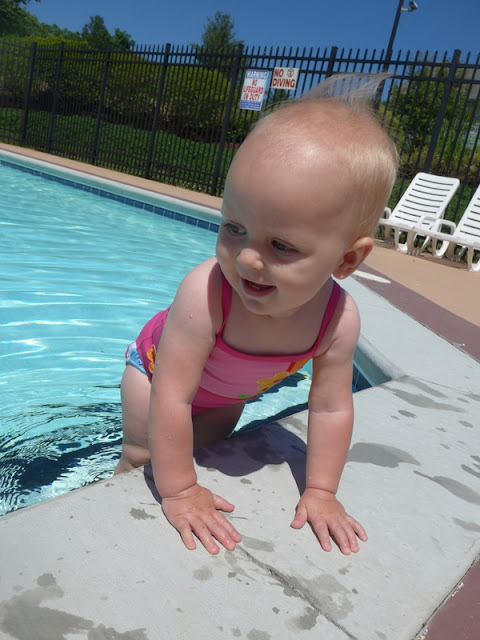 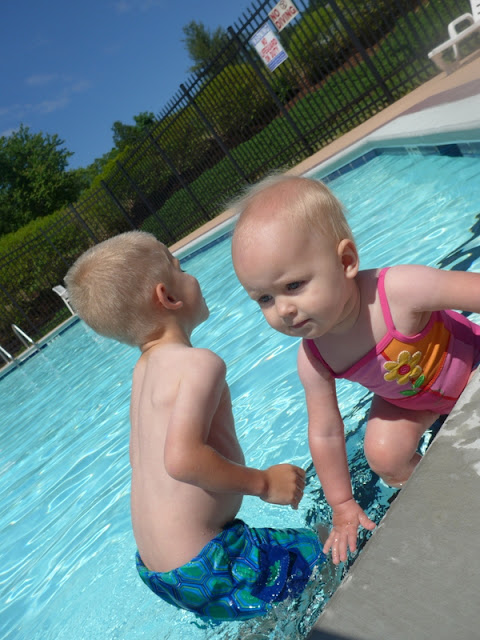 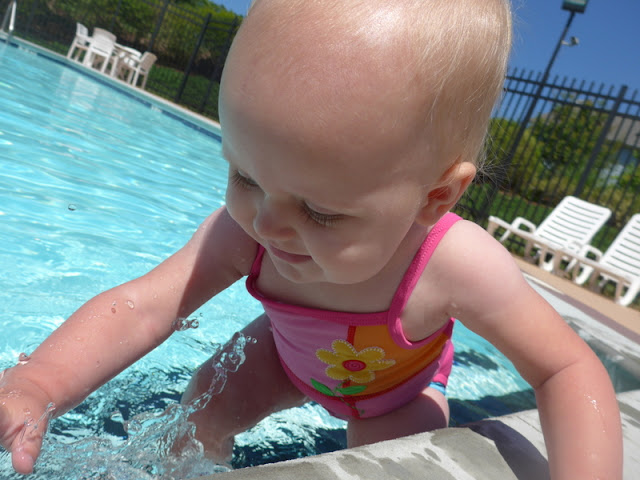 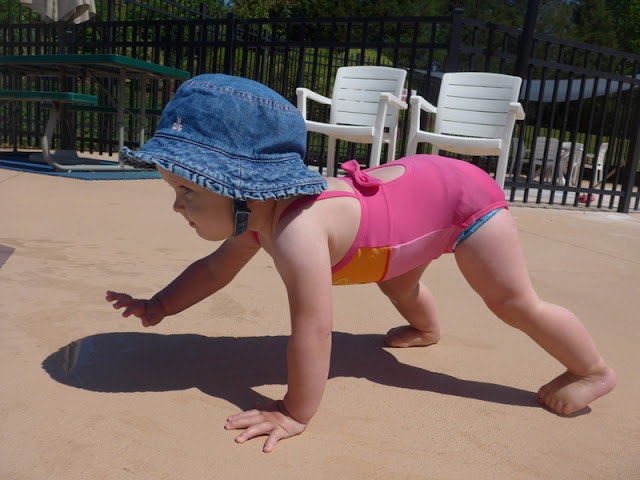 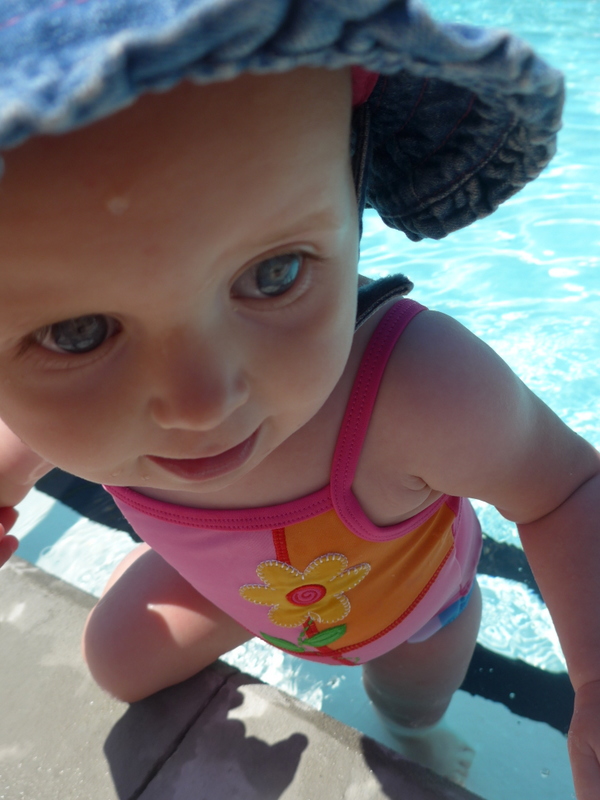 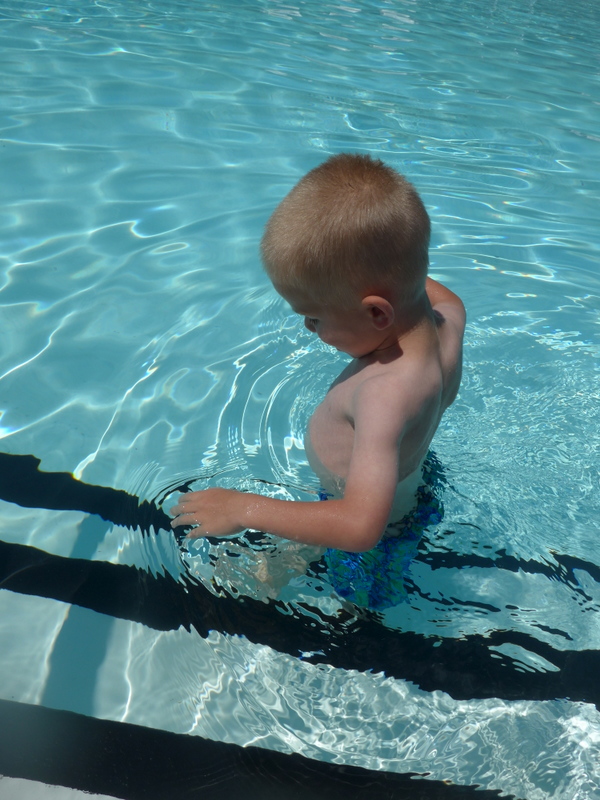 Eventually I convinced them to hop out and dry off so we could head home to meet the school bus. 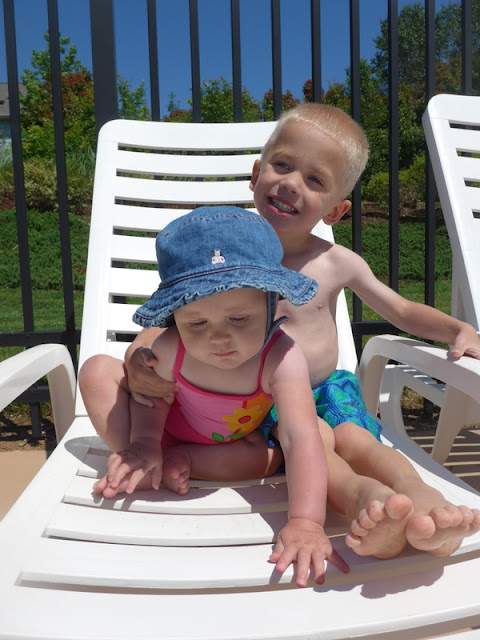 We stopped at the park for a quick swing, and a couple of turns down the slide and then were on our way home. 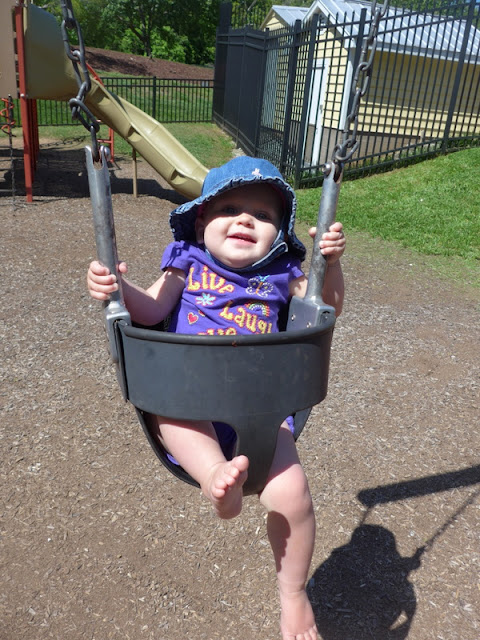 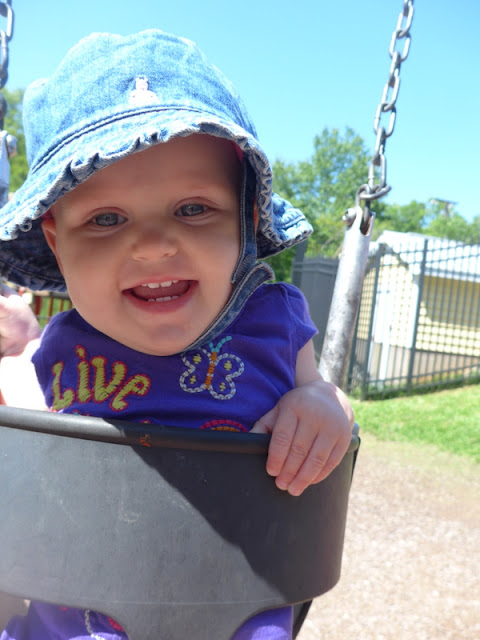 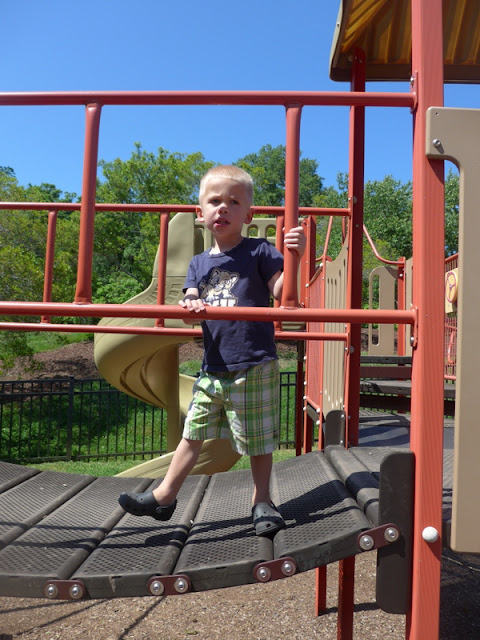 So after a quick snack we got ready to head back to the pool. The girls were a bit fussier about the temperature of the water, which rubbed off on Benjamin. I guess they were all remembering fondly the tepid water of the dog days of summer and found the fresh, cold water of May shocking. Still, they managed to quit their sniffling long enough to enjoy a few minutes in the pool.

Here's their inaugural jump into the deep end: 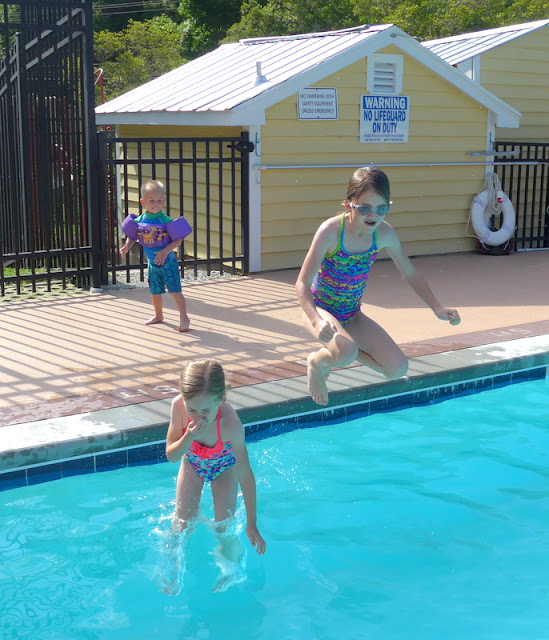 And here they are pausing a game to give the camera a smile: 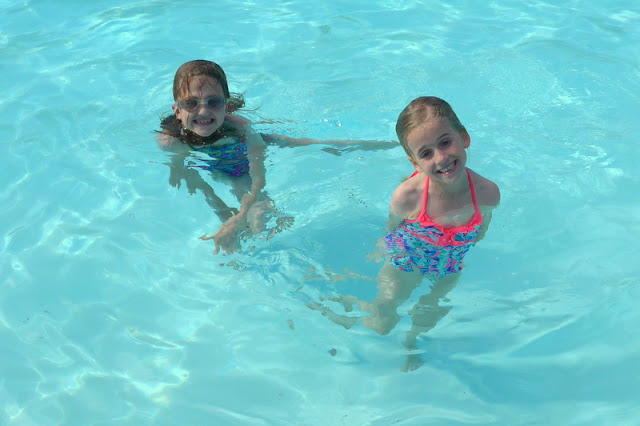 And here's Miriam throwing in the towel (or, more to the point, stomping out of the pool, declaring the water was "freezing," and rushing to wrap up in her sun-warmed towel (though that was all a little melodramatic because I see no ice in the pool so it wasn't really freezing, now was it?)). 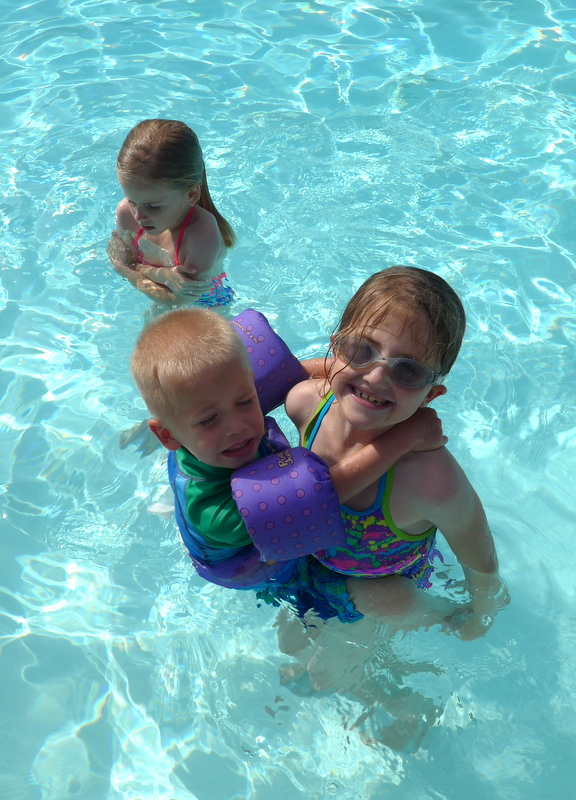 I'm a big talker, though, because at this point I hadn't yet managed to get in past my knees. The water wasn't exactly comfortable. Once you got in, though, it wasn't terrible. See? I got in. And it wasn't terrible. Rachel had fun playing photographer from the warmth of the deck while I played with the little ones in the pool. 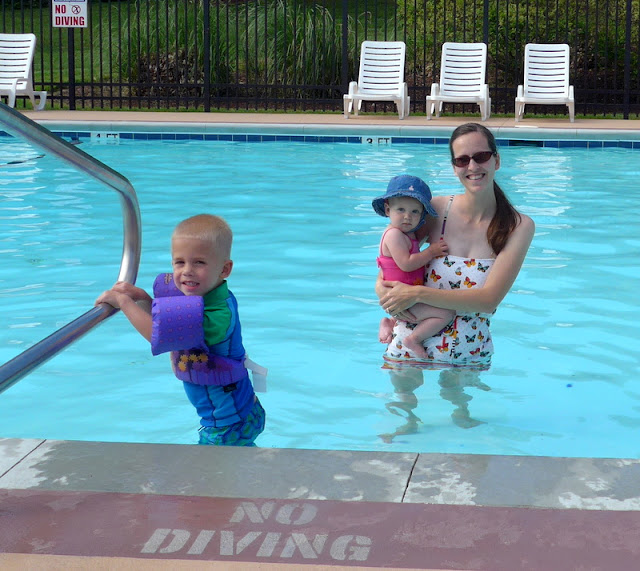 All of her big siblings got goosebumps from the water, but Zoë didn't seemed bothered by the cold at all, really. Probably because of the layers and layers of baby fat she's collected over the...year (it feels weird to use that phrase in singular, but that's all she's got—one year's worth of baby fat). Anyway, here are some pictures from Rachel's perspective: 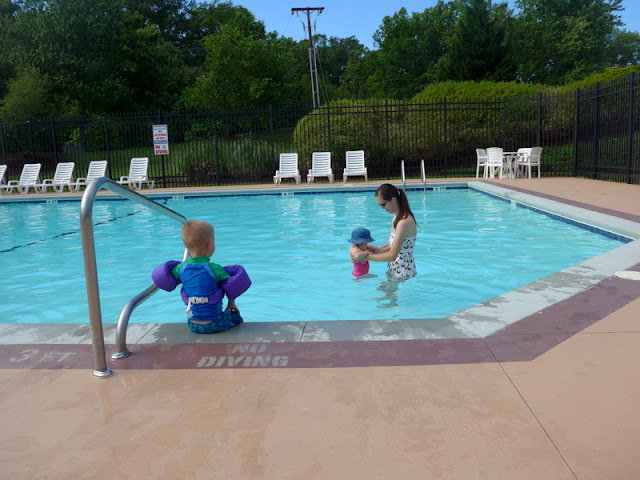 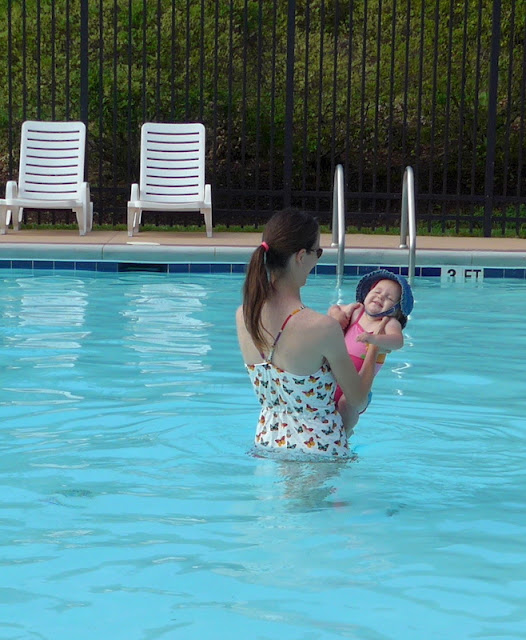 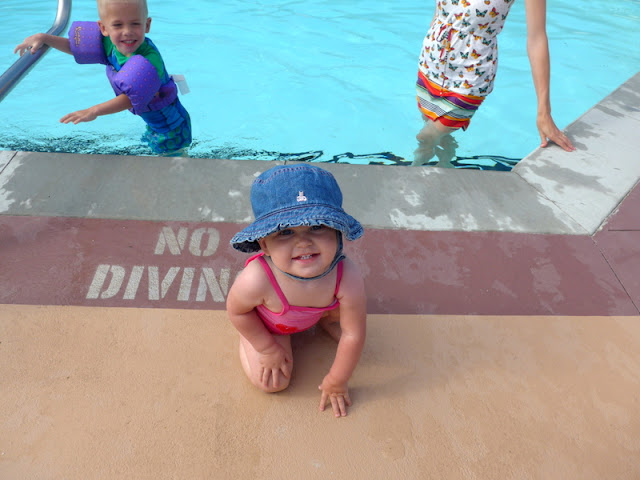 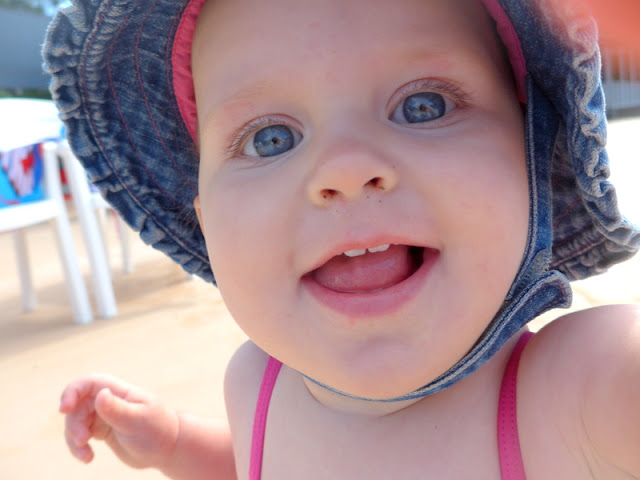 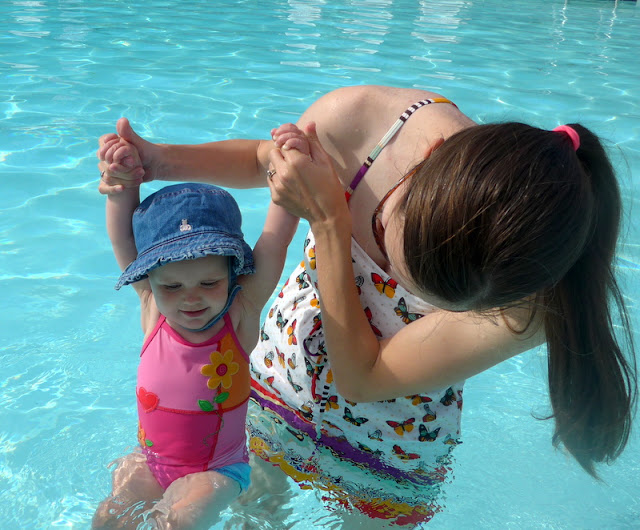 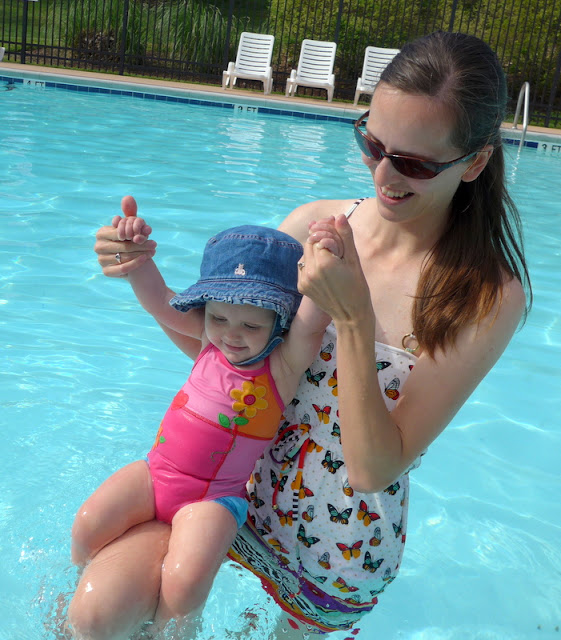 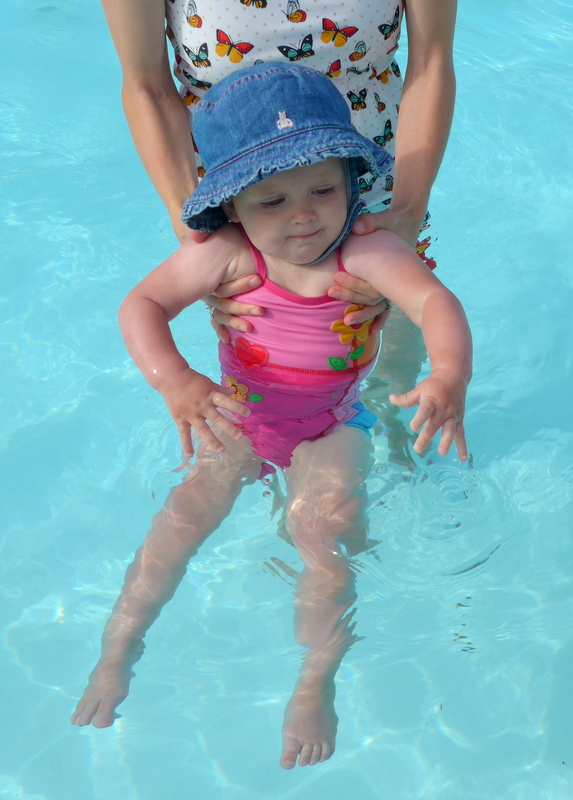 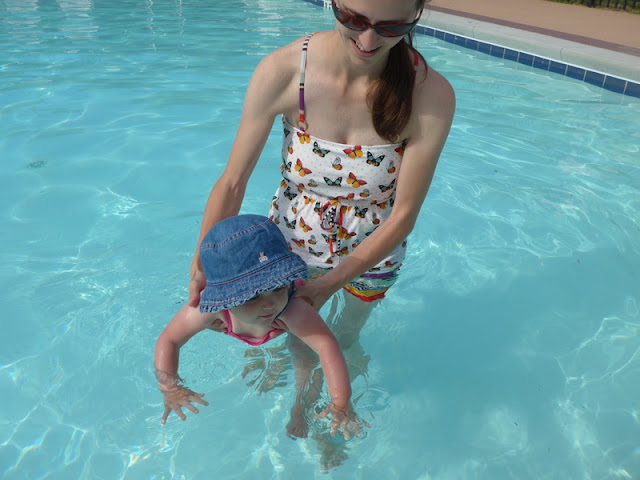 And here's Rachel taking a turn with the baby: 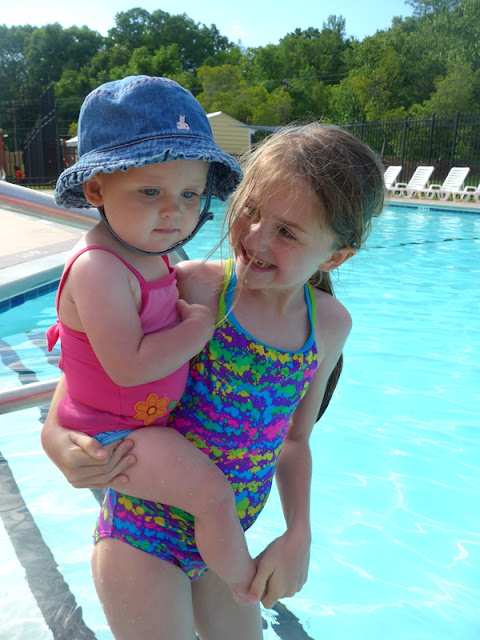 I liked this picture because everyone looks somewhat pleasant: 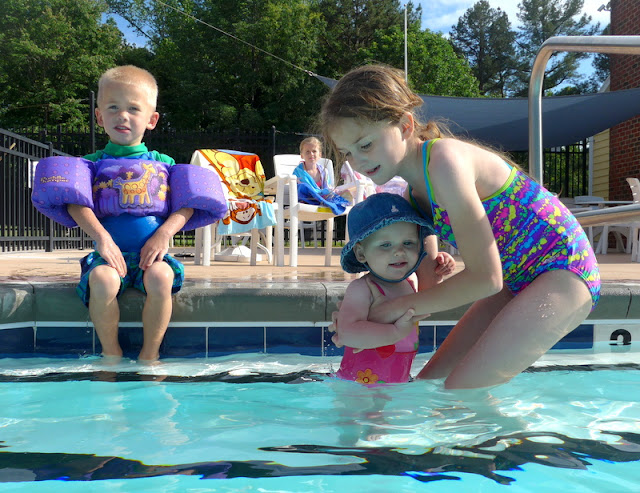 And I like this one because it shows how determined Zoë is to get places sometimes (just look at her little face as she prepares to take a big step toward Benjamin): 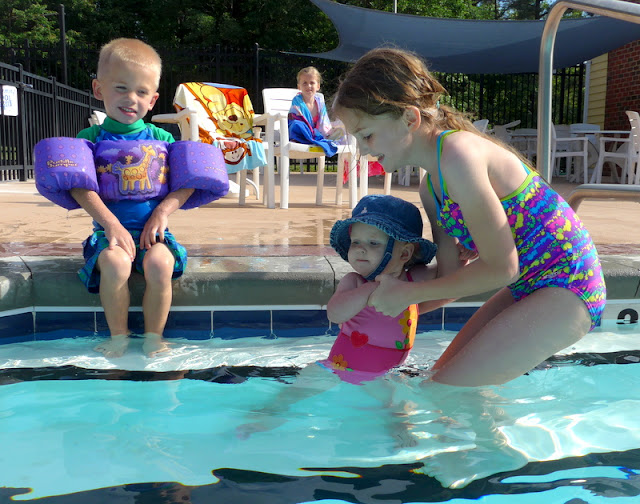 She's going to have a lot of fun this summer! We'll be spending a lot of time at the pool (I'm starting to line up clients for swimming lessons and can already tell that the pool will really be like our second home with morning swims and afternoon swims...): 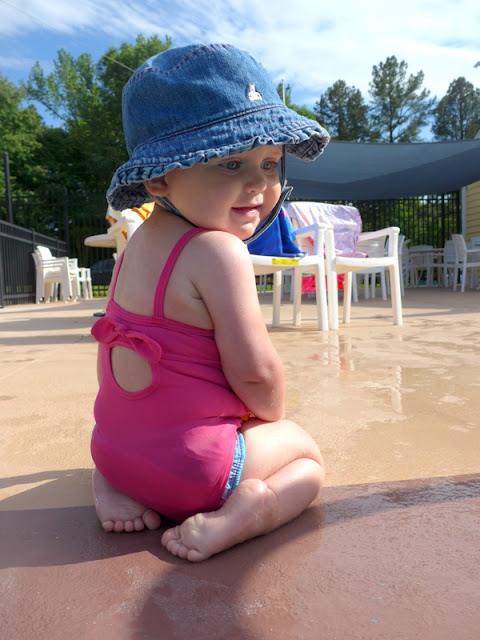 Hopefully the baby pool will open up soon! My kids really missed it today. Here they are wishing they could warm up in its shallow (thus more thoroughly sun-baked) water: 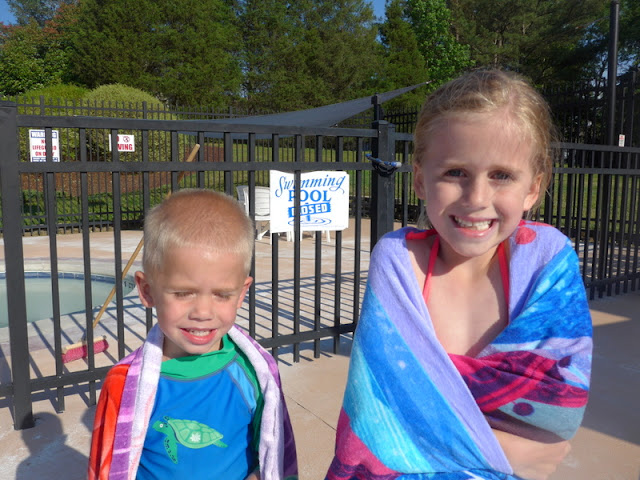 So, the pool has been open for two days and we've managed two trips to the pool so far. Not a bad record (though it's supposed to rain for the rest of the week so that will be the end of our good record). We rushed home for dinner and then headed to the library to exchange our books before coming home for FHE. Rachel got a book on the French revolution, because that's tangentially related to the musical Hamilton (which is also the reason the kids were excited to watch the movie Pirates of the Caribbean (Hamilton was born on Nevis, which is kind of by Tortuga, which is where Pirates takes place)).

For our family night lesson we discussed with our children three fundamental truths of the universe:

1) If it doesn't belong to you and you don't have permission, don't mess with it. (Like, for example, don't go riding your scooter down the neighbour's ramp to the their front porch (Benjamin)).
2) If you take something off, take something out, or whatever, put it away. Leave no trace! (Like, for example, don't take your socks off after school and leave them on the kitchen floor (Rachel)).
3) If you come across a mess and you didn't make it, you can clean it up. Leave things better than you found them! (Like, for example, if your brother neglects Truth #2 and leaves a game out in your room and then you're told to clean up your room, you are expected to clean up the mess he left because you're completely capable of doing it even if it's not "fair" (Miriam)).

Following those three simple rules at home, at school, and at play will make for happier people everywhere.
Posted by Nancy at 12:03 PM