On Saturday we attended our stake's Pioneer Day celebration. On July 24, 1847, the first group of Mormon pioneers entered the Salt Lake Valley (not counting the trailblazers who first reached the valley two days prior, I suppose), and we've been commemorating the day ever since. It's a state holiday in Utah, but I think a lot of places worldwide celebrate the day to some degree or another. There aren't fireworks and city-wide parades or anything like that, but people gather to share stories, eat food, and celebrate together.

Here we meet at the institute building to play pioneer games. The past few years it's been a pancake breakfast in the morning. This year we switched things up a bit and had a pig pickin' pot luck and Dutch oven dessert cook-off.

It was sweltering but I think the change from the status quo was a good one. It was well attended and everyone had fun, even if we did all leave dripping with sweat!

We also collected medical supplies to send to Venezuela and after a little devotional about pioneers/early converts in/from North Carolina (which I couldn't hear much of, sadly, because the sound system was not fabulous) a Venezuelan band played some songs. They weren't traditional pioneer songs, but I thought the music was great!

Here's Zoë wearing the little bonnet Grandma got for Miriam in Nauvoo years ago. Zoë loves hats so she thought this bonnet was great. She wore it (almost) the entire day. 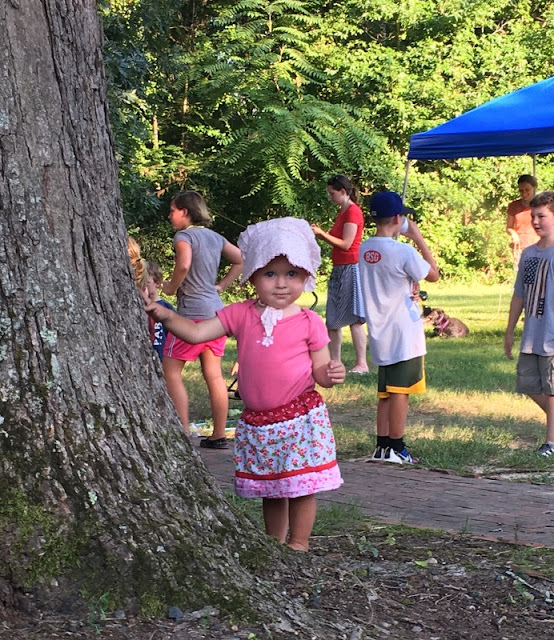 After dinner we unleashed the kids on the field to play games. Featured activities were the "game of graces," a stick pull, corn husk doll making, sack races, and horse shoes. And probably some other things that I forgot to mention...

Here are the kids working on their corn husk dolls: 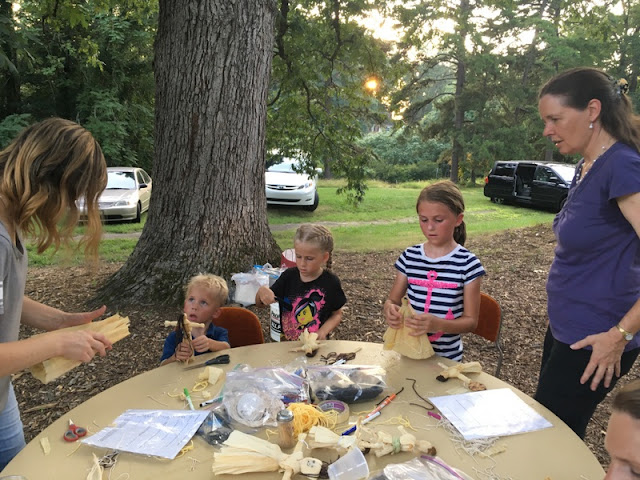 And here's Rachel and Benjamin showing them off: 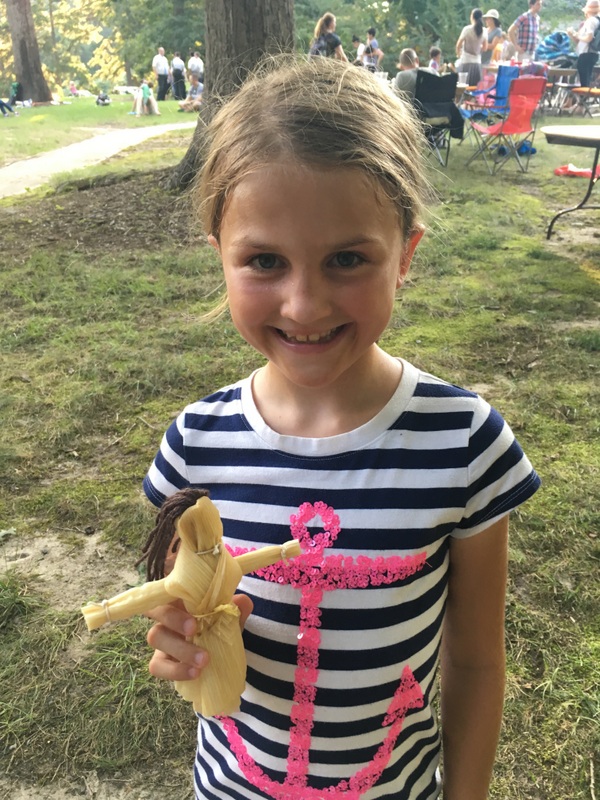 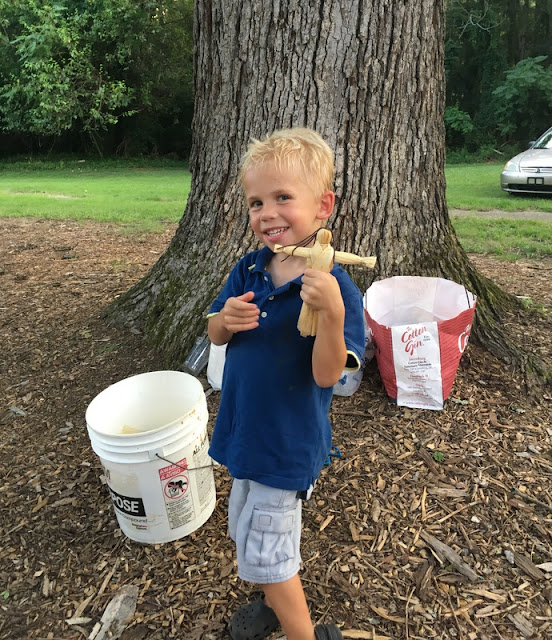 Oh, the buffalo chip toss, that's what I forgot! And how could I because that was the station I manned (or womanned). I signed up for the last slot, too, which meant we had to stay and sweat through the entire evening! (Note to future self: Don't sign up for the last time slot.)

Benjamin thought it was such a fun and silly game! 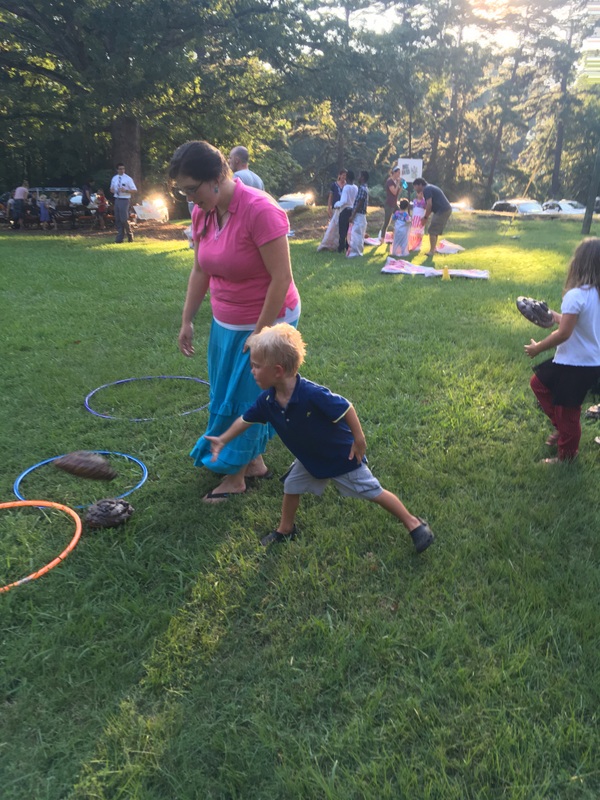 We have a song in our primary children's songbook called Little Pioneer Children, and it describes how the children would gather berries for food and hunt "chips" for wood, which is an actual thing pioneer children did, but I remember everyone thinking it was hilarious that they had to gather around hunting for dried buffalo dung. Once our music director switched the lyrics by accident and sang "See the pioneer children gathering berries for wood; see the pioneer children hunting chips for food." She lost all control of the primary that day...

We live in such opulence in North America that I don't think we, as primary children, really had any idea where our energy was coming from. The idea of burning wood doesn't seem so difficult to grasp...but burning poop seemed ridiculous.

It's still used as fuel in many parts of the world today, however, and scientists are actually looking for ways to revisit "chips" as a fuel source (see here).

As an adult, burning buffalo chips doesn't seem like a crazy idea anymore.

But my children thought it was hilarious. Just the idea of handling poop, I suppose...

This little boy couldn't stop giggling about it! 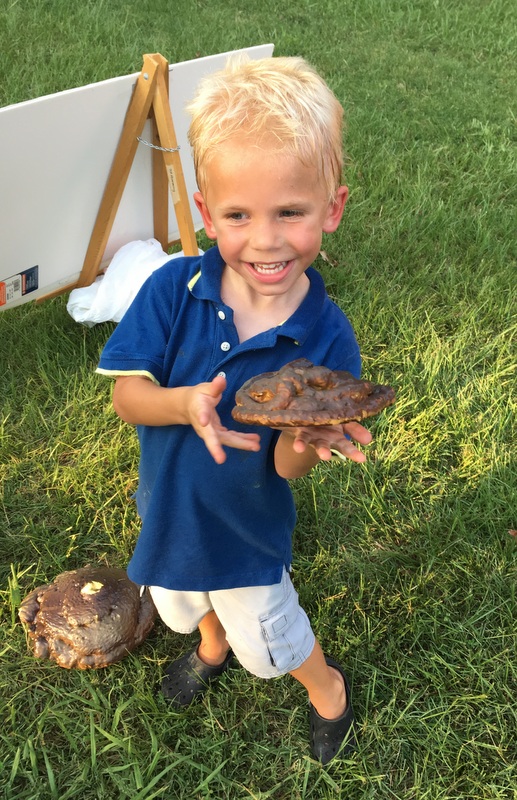 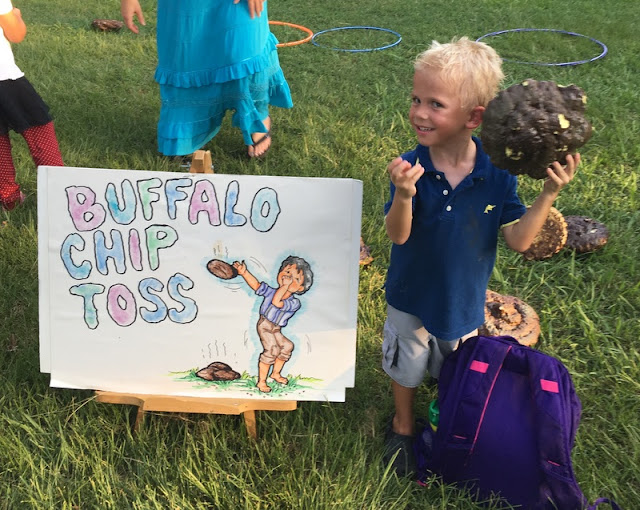 And here's Zoë examining some buffalo chips. She doesn't look very impressed. But that's fairly normal for her, isn't it? 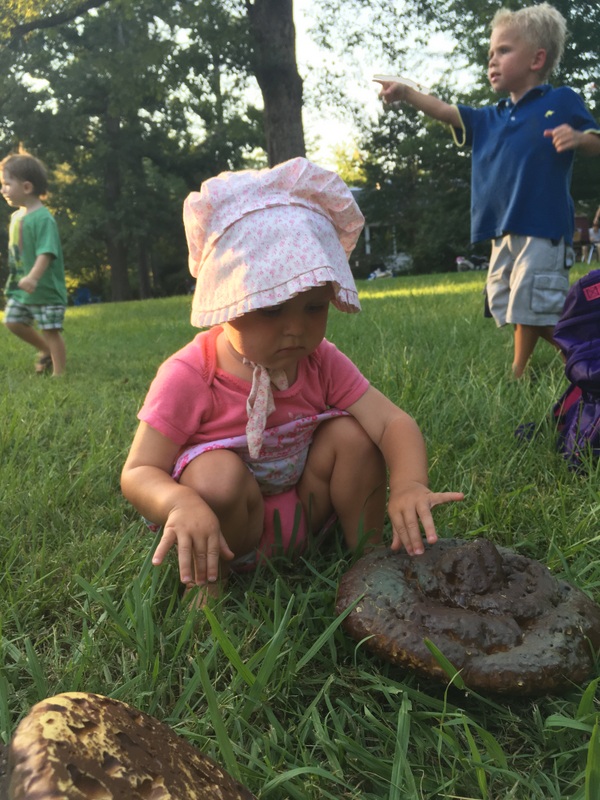 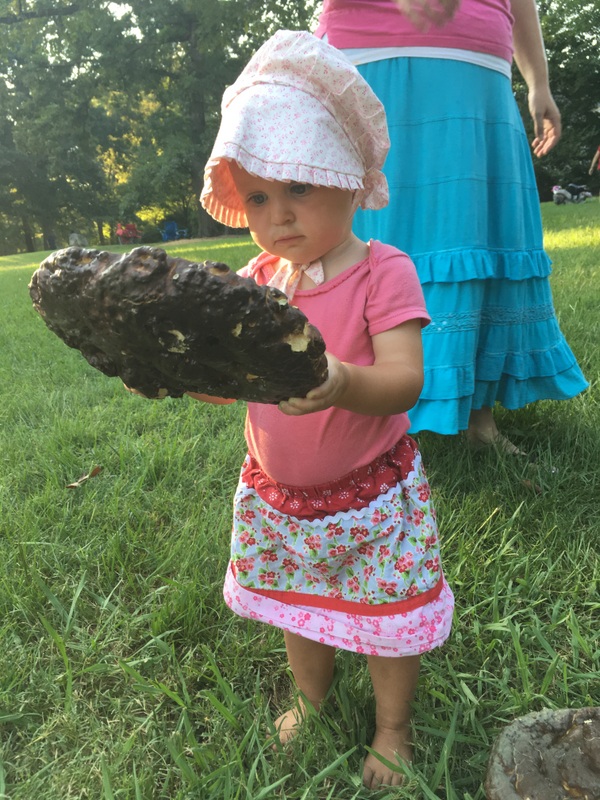 Here's Zoë banging the sticks from the stick-pull station. 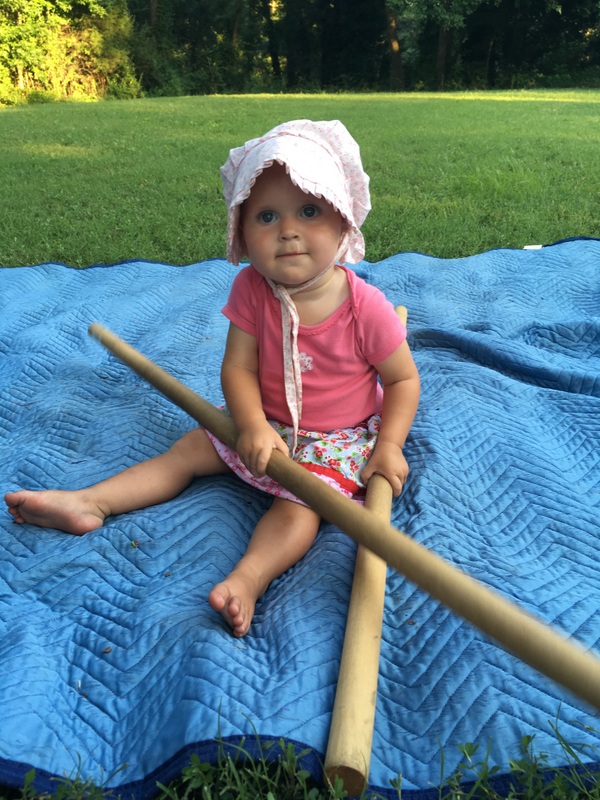 Andrew has a few pictures of sack races on his phone, I believe. I beat Rachel two times. Here's Zoë playing in one of the sacs; she hasn't figured out how to jump yet but she was shaking that sac as hard as she could! 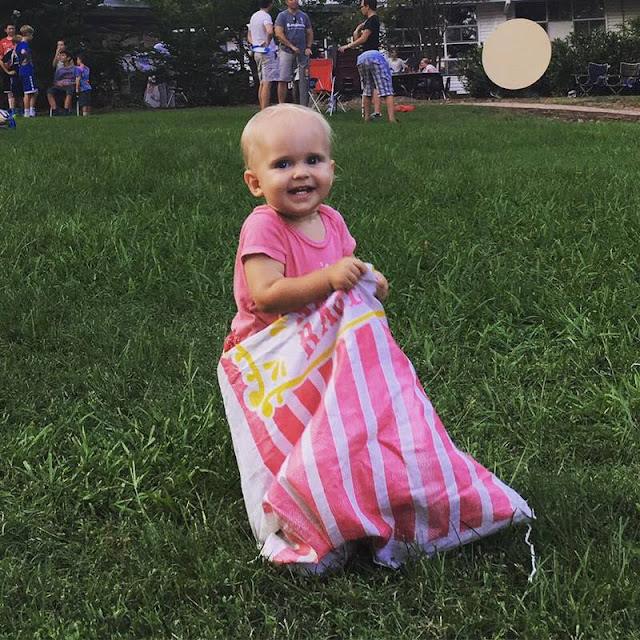 We stopped by the photo-op station on our way out the door. Zoë was, yet again, not impressed, but I think the others enjoyed the handcart! 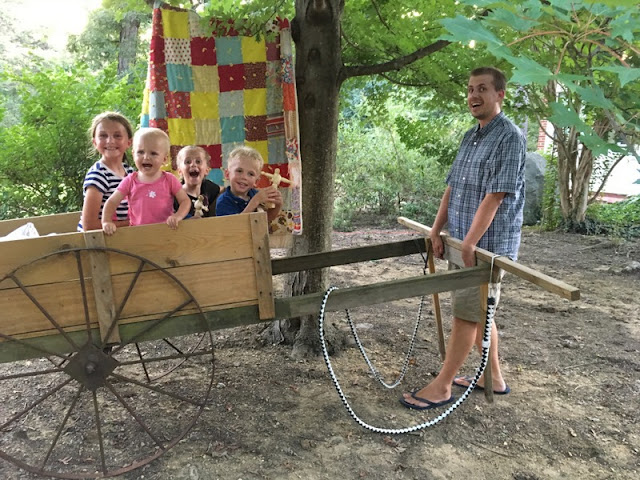 When Andrew was a little boy he attended church at the institute building (it was a ward building back then and the Berini building (where we meet now) was the stake center (which is mind-boggling to think about because the Berini building is quite small (for the number of people that meet there))). We stopped to talk to many, many people in the stake who knew Andrew's family when they lived out here and they all said the same thing about Benjamin—he's Andrew's mini-me!

On our way to the van we stopped to take a quick picture of the kids playing on the rocks outside the building. Andrew has many memories of playing on these rocks. "Probably while waiting for my dad to get out of bishopric meetings," he said, which is something our family is getting used to doing as well. We don't have cool rocks like this at the Berini building though. 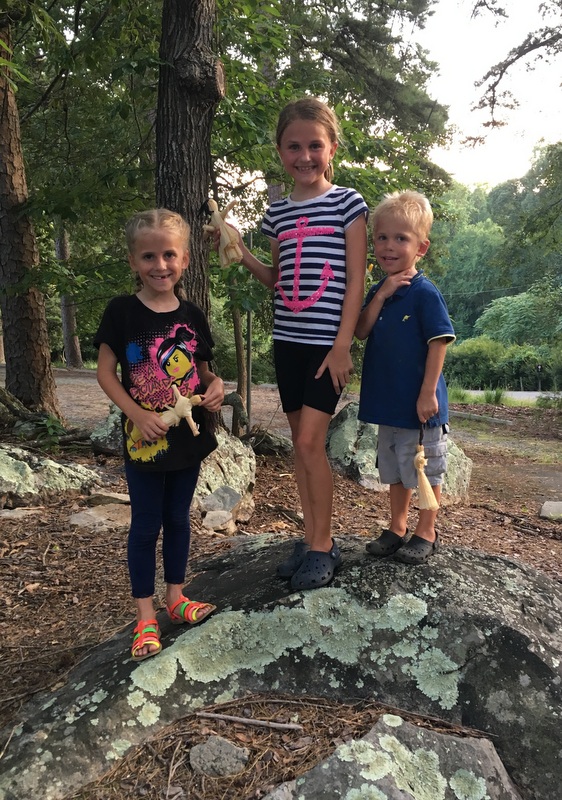 Oh, and here's one with Zoë being completely unimpressed yet again... 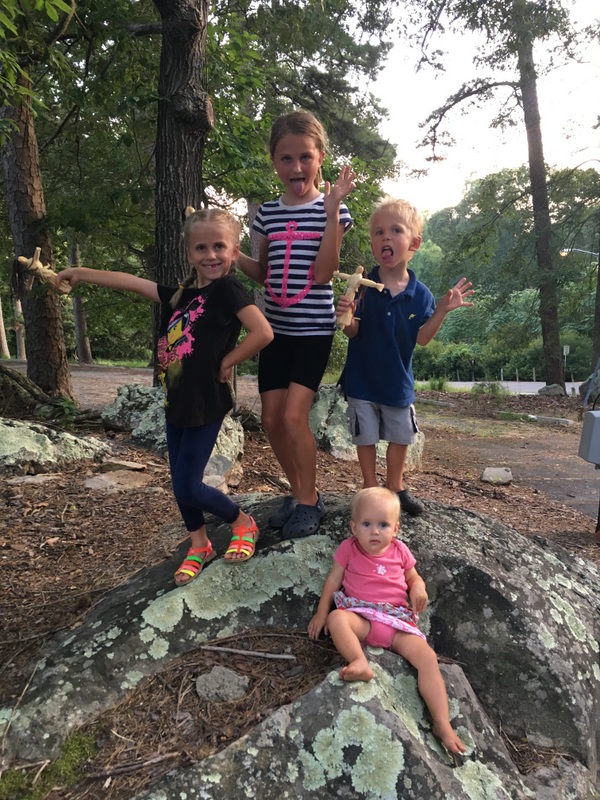 The kids were all completely worn out and on the way home, not only did Zoë fall asleep, but Benjamin uttered a phrase we never thought we'd hear as parents.

Three hours in 95°F heat (and so humid it was hard to tell whether you were standing under the misting tent or not) is apparently the secret to getting that boy to admit he experiences tiredness.
Posted by Nancy at 12:23 AM