Rachel's birthday: the cake and things

For her birthday cake Rachel requested either a Hamilton cake or a Star Trek cake. There was a lot of pressure from everyone else in the family to try my hand at a Hamilton cake, so that's what I went with. We're a little obsessed over here and I'm not even sorry (Crystal, you know our catching obsession has only made your life better, right?).

Side story: Yesterday Benjamin, Zoë and I watched Michelle Obama's carpool karaoke with James Corden (which was awesome, by the way). I said to Benjamin, "Do you know who that is? That's President Obama's wife. Her name is Michelle Obama."

"Hmmm," he acknowledged briefly and then said. "Why does The Baker have a car? The Baker doesn't have a car!"

It took me a minute to realize that he was talking about Into the Woods.

Later when we were working on the cake (read: when I was working on the cake and Benjamin was getting in the way helping) he wanted to know if Alexander Hamilton was black. At the time I was using black icing to draw Alexander Hamilton, and he's seen various videos and pictures from the musical production so he knows it's a very diverse cast, so his question was justified.

This little boy cracks me up! He's always wandering around the house botching musical lyrics, singing his own little mashups. "I want to go to the festival! The king's festival? Hahaha! I'm not throwing away my shot in San Juan!"

I suppose there are worse things he could do.

But, anyway... This is a post about Rachel's birthday. So back to her. And her cake.

I whipped up her cake (à la boxed cake mix) on Tuesday evening and then sat down to make a frozen buttercream transfer. It looked amazing! 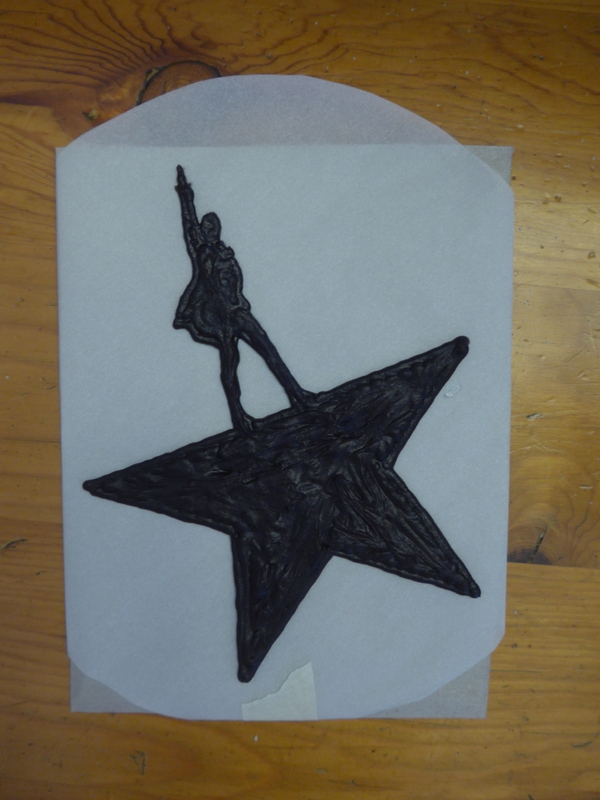 First you trace your picture onto parchment paper, then you flip your paper over so you're working on the mirror image (and don't get graphite dust in your icing) and you trace over your drawing in icing. Then you freeze it and then after you ice your cake you just press the transfer onto your cake and *presto!*

It's supposedly much easier than piping onto the actual cake.

Unfortunately, when I took my transfer out of the freezer it was still soft! I used store-bought black frosting (because colouring frosting black is a nightmare) and I wonder if that stuff actually freezes because it's not real frosting. At any rate, mine didn't ever harden, even though I left it sitting in the freezer over night, so when I tried to transfer it onto my cake it would not transfer.

It wasn't the end of the world. I still had black frosting left, so I just drew the Hamilton logo on the cake freehand. But, let me tell you, that was a whole lot harder than tracing it on the parchment paper! 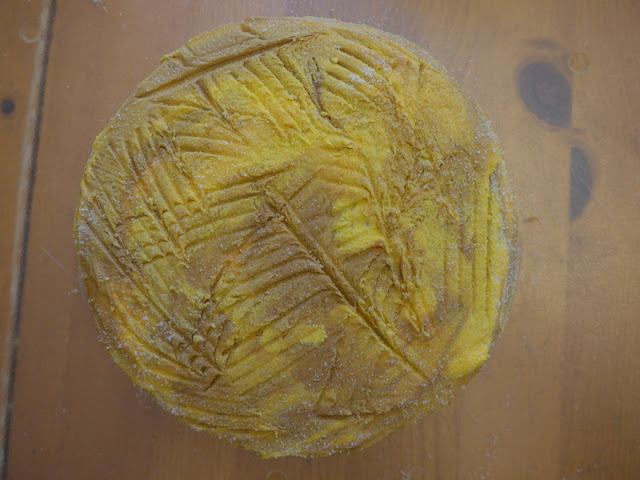 And here it is all decorated: 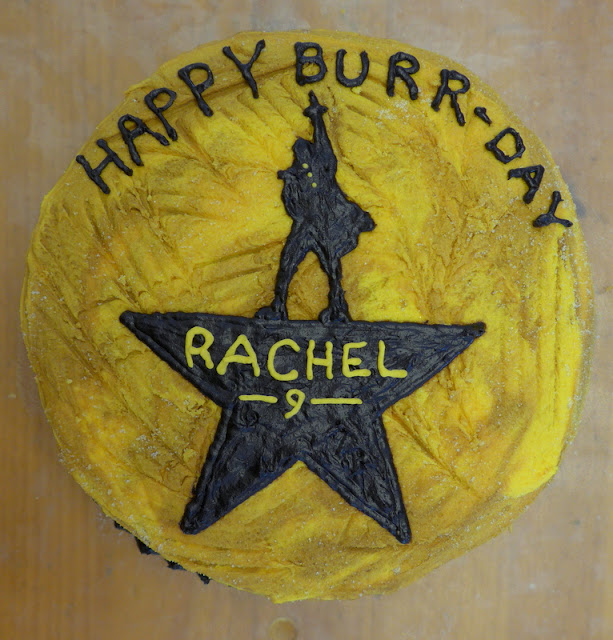 "Happy Burr-Day" was Rachel's idea, of course. That girl does enjoy a good pun. She gets it from her daddy, I'm sure. The other day at dinner he got out some cucumbers I had left soaking in some balsamic vinegar in the fridge, and said, "Here are your cucumbers. I think they've marinated long enough."

"What does marinated mean?" Rachel asked.

"It means your cousin spat on it," Andrew said, without missing a beat.

Rachel screwed up her face in confusion.

"It means you let something sit in a sauce and soak it up," I said, equally confused.

"But why would Dad say it means my cousin spat on it?" she asked.

He's so funny. And Rachel will soon rival his wit, I'm sure. Not that I mind. I like a good pun as well as the next guy. 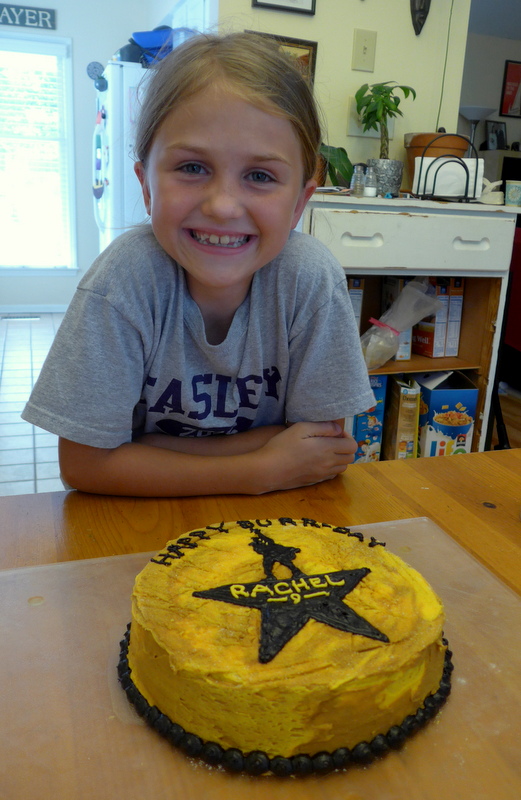 And here she is with Benjamin and Miriam: 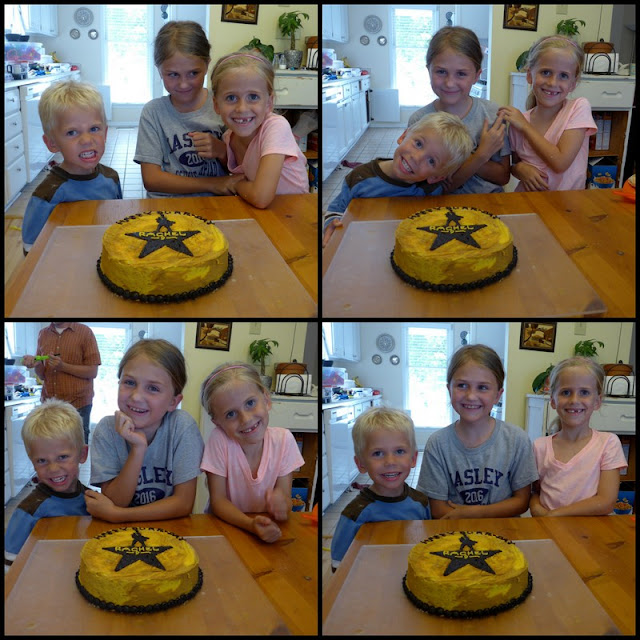 I couldn't decide which Benjamin face was the best. They're all good.

Zoë would have been in here but we were rushing through the birthday celebration because Daddy had to go to church, so we'd just finished with dinner and she was all messy in her highchair. I suppose we could have put the cake on the other side of the table, but it was still all full of dinner mess as well. And we were in a hurry. So Zoë got left out while we sang to Rachel.

Here's the lighting of the candles... 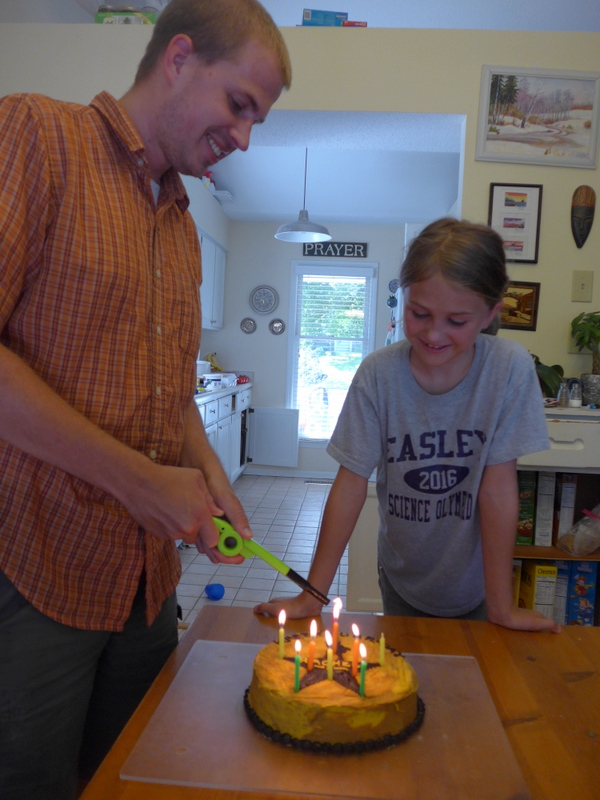 And the blowing of the candles... 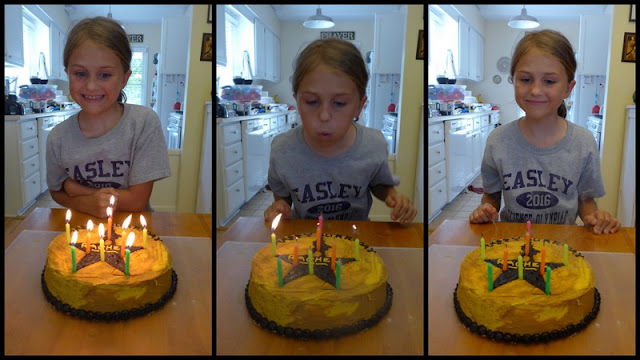 And the face Rachel made when I asked, "So, any boyfriends?" 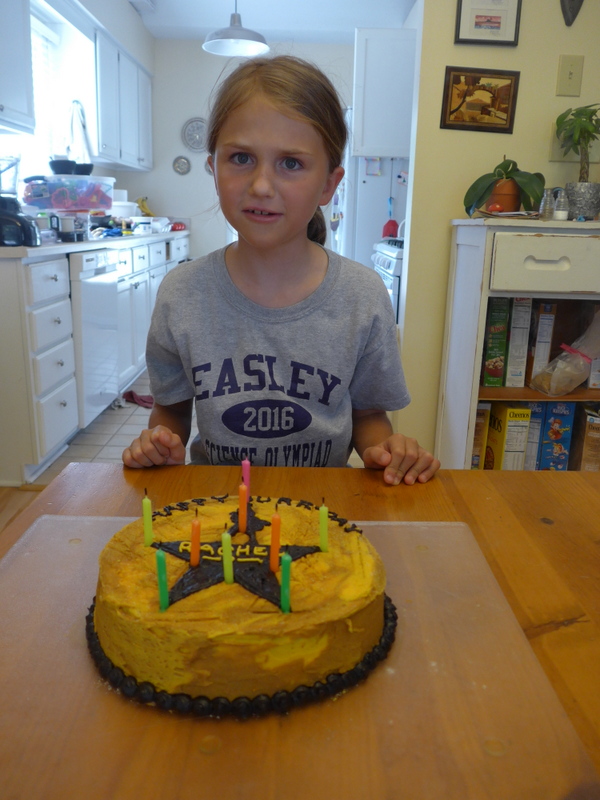 I was sure that candle on the far left wasn't going to go out, but obviously it did. If it hadn't we would know she had a flame in her life, see? But apparently I neglected to tell her about that superstition until this year because she had no idea what I was talking about.

After blowing out the candles we headed to the living room for presents. We gave Rachel a couple of posters: 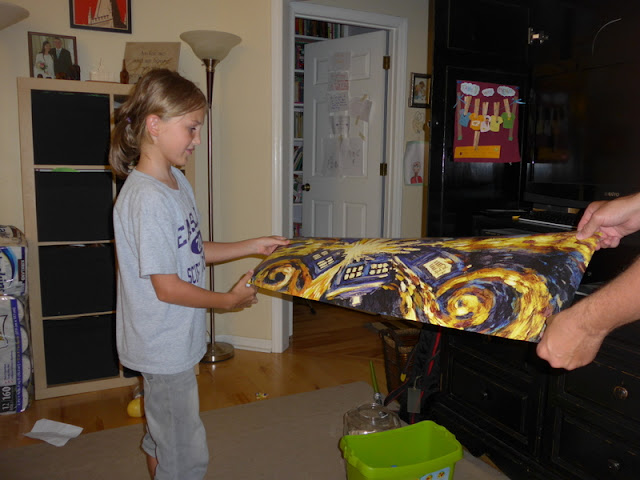 She got a couple of key chains from Miriam and Benjamin: 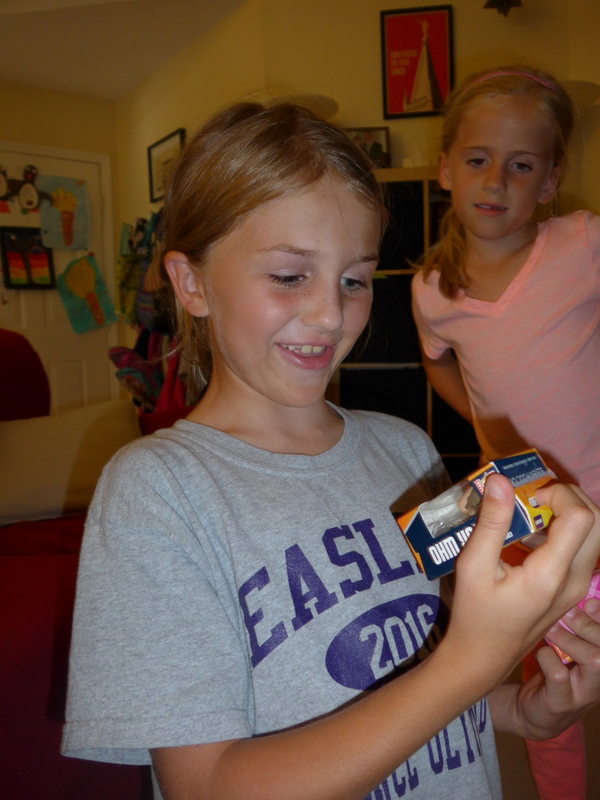 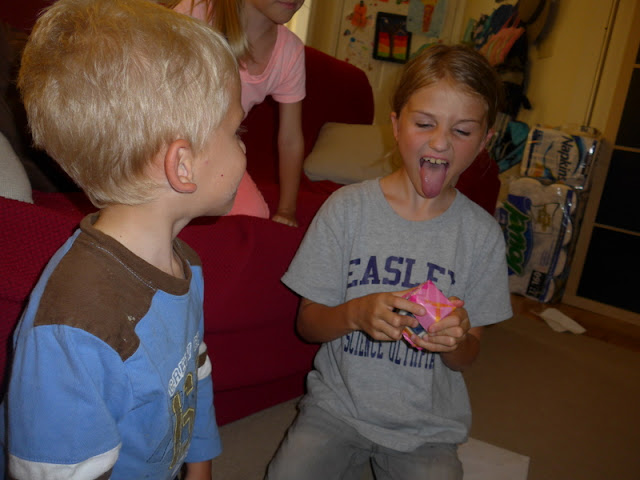 My mom sent the second book in the Red Blazer Girls series (and on the floor behind her is Why is Snot Green?, which she got from Zoë): 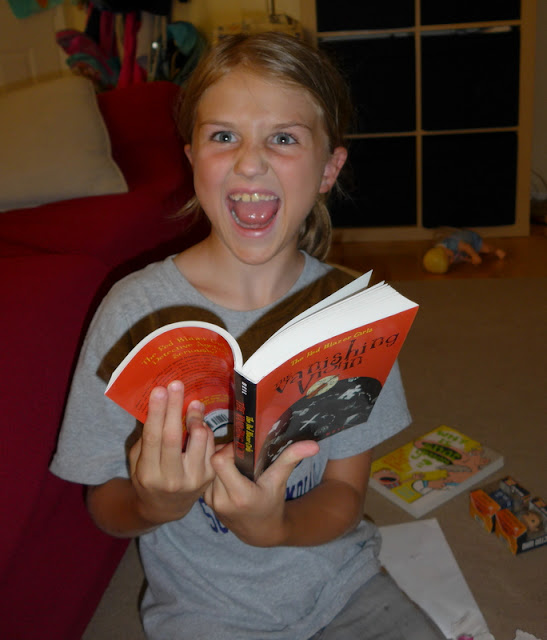 Her favourite gift was the watch we gave her. She's been asking for a watch for a couple of years now. She was pretty excited about it. 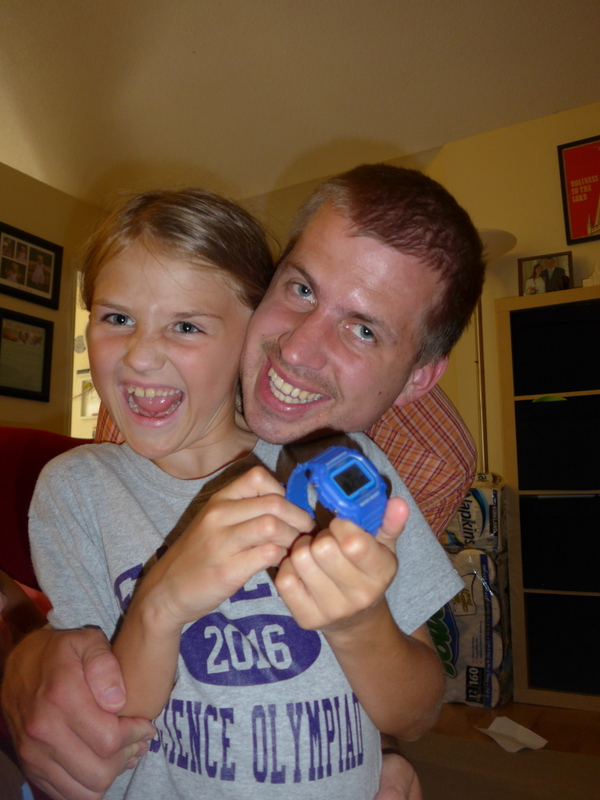 Andrew ran off as soon as she was finished opening her gifts and I took the kids back to the table for cake and ice cream. Rachel cut the cake herself... 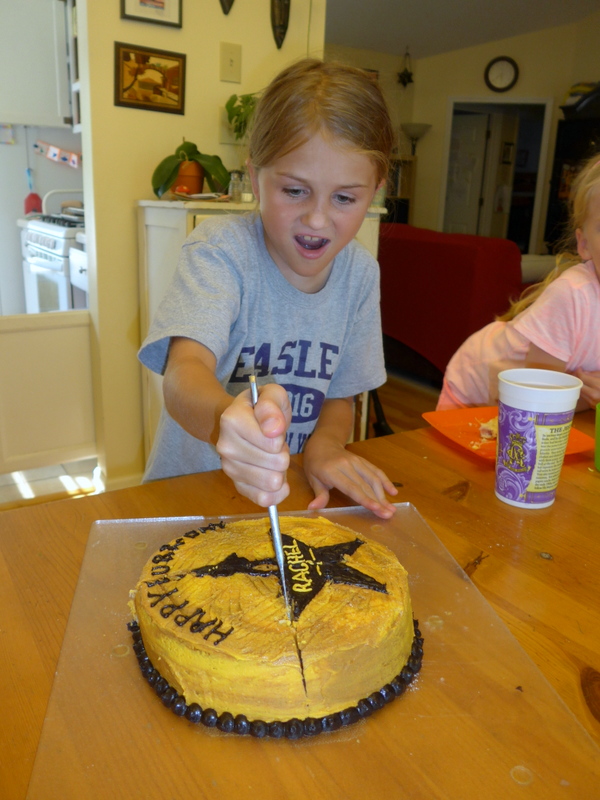 After cake we cleaned up a bit and then went for a walk to the park where the kids all worked on their monkey-bars skills. I was keeping an eye on the time because we had a skype date with Grandma at 7:00 (we'd missed skyping with her on Sunday) and had just convinced the kids it was really, truly time to go when we saw Andrew heading our way. That was quite a surprise! I thought he was going to be at the church way longer than he was!

Grandma wanted to watch Rachel open the gifts she'd sent. When Rachel pulled the card out of the envelope she found the exact same birthday card that my family had sent her! We thought that was so funny! 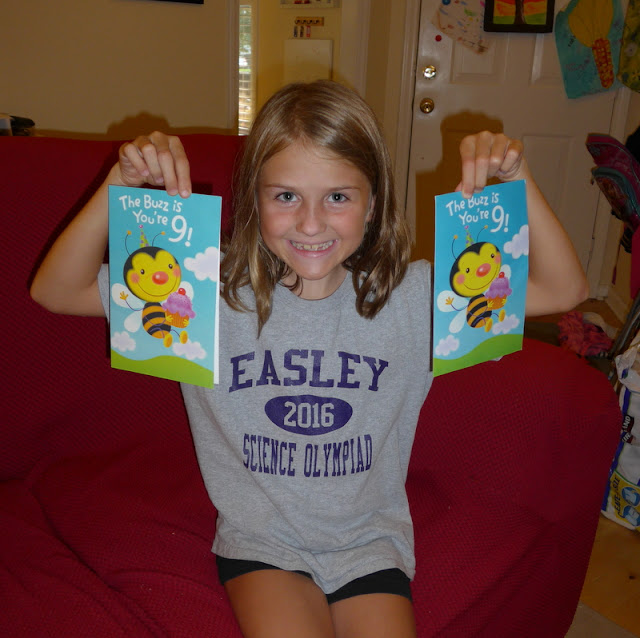 "But who wrote more inside?" Grandma said with exaggerated earnestness. "Probably Naanii..."

My mom always has everyone sign the card, so there was definitely a lot more writing in the card from my family. Not that it's a contest...

I haven't taken pictures of Rachel's present yet, but it was pretty awesome. Grandma made a TARDIS kleenex box cover for her!

"Ooh! Thanks for the kleenex!" Rachel said when she opened it.

"I was out," Rachel shrugged.

Now she's got a TARDIS kleenex box on top of her TARDIS bookshelf in her bedroom. She's pretty happy about that. Happy Birthday, Rachel!
Posted by Nancy at 10:14 AM