He was so little when we moved here that I hadn't made up a birthday poster for him yet. I had high hopes of getting that done in a timely matter...and about three years later I finally finished it. One month before Zoë was born, we took down that "11×14" frame and put Benjamin's poster inside, completing our wall. But our victory was short-lived because one of our first purchases after Zoë was born was a set of 11×14 frames, one for her collage and one for her birthday poster.

"This time I'm going to leave this big picture of this random kid in the frame," Andrew said. "To motivate you to finish faster."

And yet again our wall was left with an awkward gap, this time filled with a mystery child rather than a paper stating the dimensions of the frame. I'm not sure which was worse, frankly. I mean, the dimension-paper was clearly a blank frame, but the random child model tends to really throw people off...

It has garnered several double-takes and a whole lot of teasing. I suppose all that teasing paid off though because I have (already!) finished Zoë's birthday poster (I think; I'm still tweaking it) and it should be ready for the frame in the next day or so. 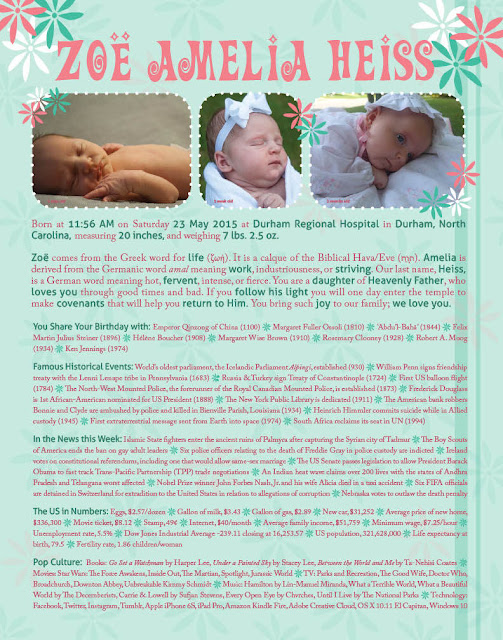 She just barely turned one so I consider this a huge victory.

Also, as I was doing some of the research for her poster I decided to throw our last name into the Online Etymology Dictionary (which might be one of my favourite websites in the whole entire world wide web (don't judge)) and it suggested words like "fervent, fierce, intense, excited." I've always just said, "Heiss. German for hot. The end."

But look at us! Now we're hot and fervent, fierce, and intense.

Some of us are more intense than others.

I don't know why I didn't probe deeper into the meaning of our last name sooner. Now I feel like I need to update all the kids' posters to include our family fierceness. And also because Adobe now supports foreign alphabets like Hebrew and Arabic and Greek (it didn't before (at least not well)). But that's something I can get around to doing in the next decade or so...
Posted by Nancy at 12:38 AM