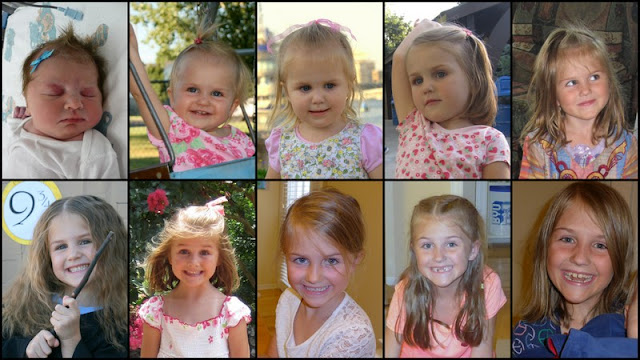 She's passionate, clever, quick-witted, hilarious. Like all kids, she went through an annoying knock-knock joke stage but now her puns are on point. She makes me laugh all the time.

She's curious, determined, responsible, and kind. She loves new experiences and challenges. She worries about the future. She wants to do everything right and will work hard until she succeeds. She is not one to give up. This past week she was complaining about one of her piano songs, how she didn't like it, and never wanted to play it ever again.

"Well, then!" I said, frustrated by her attitude (coaxing kids to practice isn't my favourite thing). "Practice it until you can play it well enough to pass it off and then you never have to!"

"Fine! I will!" she fumed, frustrated by my attitude (being coaxed to practice isn't her favourite thing).

She passed off the song during her lesson—with flying colours—but the next day when it was time to practice she opened her book to that song and started playing it.

"What are you doing?" I asked. "I thought you never wanted to play that song ever again!"


And just as she learned to play that song—and enjoy it—she learned to bike and swim and read and multiply and walk. Through sweat and tears and perseverance, Rachel conquers anything she puts her mind to.

She has a will of iron. When she was a toddler there was no convincing her to do something she didn't want to do (or talking her out of doing something she had decided to do). Her temper tantrums were epic, hours-long affairs. Thankfully, she's grown out of temper tantrums (for the most part). Her iron will is still serving her well, however. She loves setting and completing goals and has an excellent compass of right and wrong. This year she's reading The Book of Mormon for the first time this year, crossing off the daily assignments she's made for herself (and requiring no coaxing from me since it was her decision).

She's a kind older sister, she's helpful around the house, and is fun to be around, to boot. Watching her grow up has been immensely and intensely rewarding. I know our work here is not finished—we have many more challenges and beautiful moments ahead—but, as Rachel pointed out, her time in our home is halfway over! She has every intention of moving out to attend college; she's been talking about it for years now (and I have no question that her plans will come to fruition). It's mind-boggling to think about it though. She really only has nine years left at home!

I hope those nine years are just as magical as these last nine years.