A short visit with Naanii

In an amazing feat, my mom managed to see all six of her children—in person—inside the month of February! Seeing Josie, Patrick, and Kelli wasn't too difficult, but seeing me, Abra, David required some doing. At the beginning of February my mom and Patrick drove up to Alberta to see my niece Piper (Abra's daughter) in her school play (I heard she was phenomenal), in the middle of February David flew in to Utah (from England) for a business trip, and at the end of February my mom had a conference in Florida and decided to "stop by" North Carolina on her way home.

We're so glad she did, even though she wasn't able to stay long.

She arrived on Sunday, mere hours after Andrew himself arrived home. The bishop picked him up from the airport and took him directly to church where he grabbed the van to head back to the airport to get my mom. It was a long, crazy day for him!

My mom helped out in the nursery for the last two hours of church; she felt silly because she was wearing pants but I told her that (a) I didn't care and (b) there are usually a few women who regularly wear pants to church so she was in good company. I don't think anyone even noticed.

Here's Zoë looking a little wary about being in Naanii's arms: 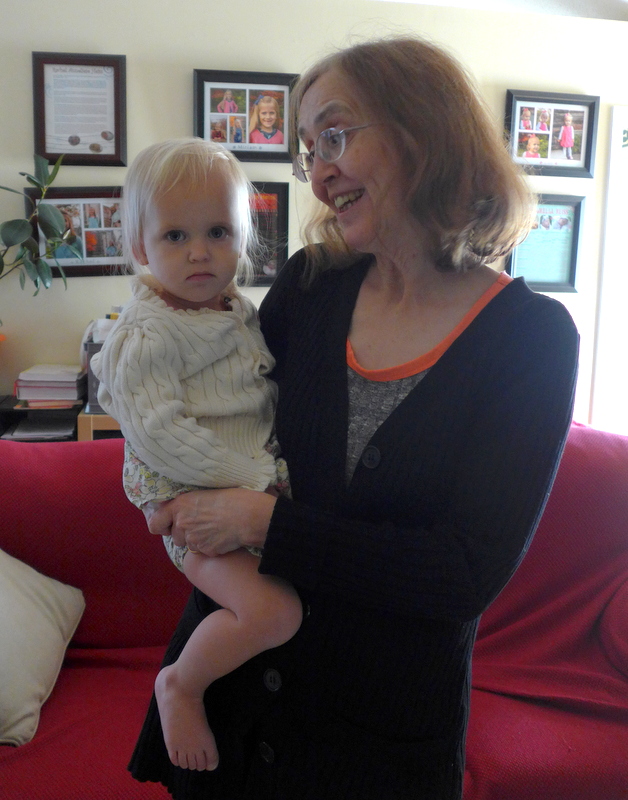 But she was enamoured enough to join in on the "who gets to sit by Naanii" fight at dinner: 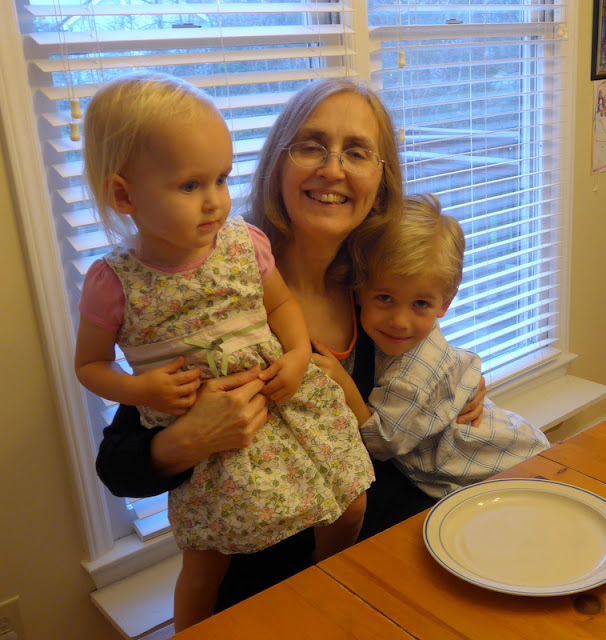 I didn't take many pictures on Monday. My mom and I had stayed up pretty late talking the night before so we just spent a quiet morning at home. Benjamin showed Naanii what a handful he can be and took all day long to do three things: get dressed, empty the dishwasher, and have a reading lesson. 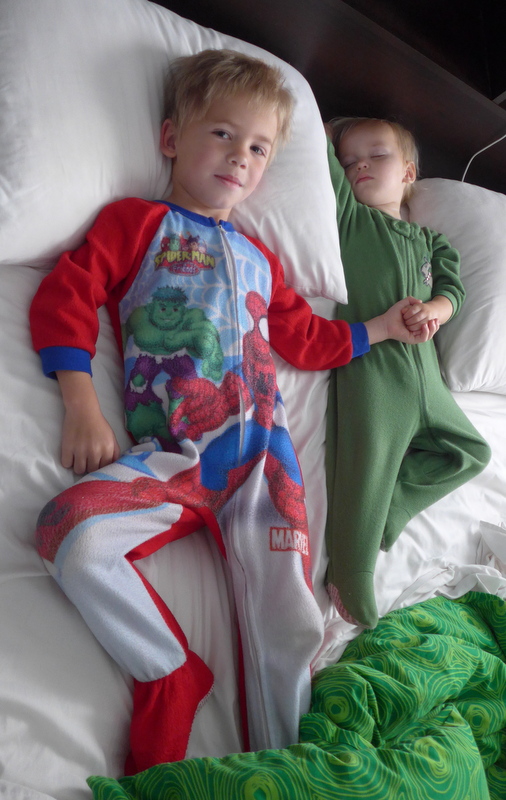 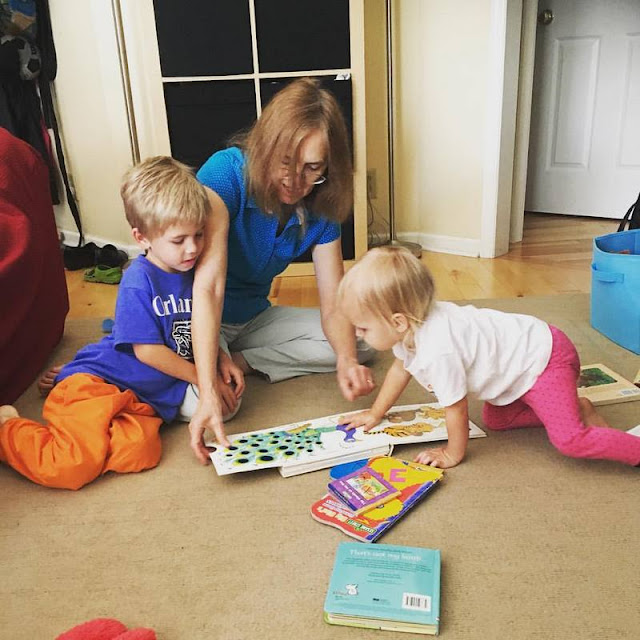 In the afternoon we went to pick Miriam up from school so we could spend some time playing at the playground while Rachel was at chorus. We played and played and played until Zoë was feeling tipsy. When I asked her if she was tired she said, "Yeah. Go. Car." The poor girl had played so hard she could hardly keep her balance anymore!

We had Cook Out for dinner, started the girls' science project for FHE, then got everybody into bed.

Miriam woke up in the middle of the night claiming she was sick, but void of any unsettling symptoms. She's had a cough pretty much all of February, it seems, but she's been fever-free and cheerful, including through her middle-of-the-night adventure.

You see, she vomited. But it was so weird. She just calmly vomited and then climbed back into bed. She only told me about throwing up when I went to check on her—and then I didn't believe her because she tends to be a rather melodramatic sick person (lots of dry heaving before vomiting, lots of tears, and moaning, and so forth). She wasn't shaking or crying or gasping for air. She just calmly told me that she threw up.

Then she smiled and said, "So, I guess I can't go to school for 24 hours now, which means I'll just have to stay home."

That is always a hard rule for me since I've had some pretty vomit-prone children. If it's obviously not a stomach virus I still send my kids out and about. When you have an underdeveloped esophagus and you throw up when you cough/cry/laugh too hard or too long (which translates into throwing up pretty much every other day for years of your life) you simply stop following the 24-hour rule. That was Rachel, though, and this is Miriam, whose esophagus has always known how to do its job.

Still, this throw-up incident was weird.

"Does your tummy hurt?"

"Do you feel like you're going to throw up again?"

"Did you throw up because you were coughing too hard?"

"Well, there was also some burping involved."

"Did you throw up because you ate too much?"

Honestly, we all ate too much. Cook Out servings are huge. We put plenty of leftovers in the fridge but I think we all managed to overeat anyway.

With no accompanying fever, and no tummy ache, we decided to send her to school in the morning. Because we're germ-spreaders like that (and because this wasn't a stomach bug). I had a hunch, though, that she really wanted to stay at home to spend some time with Naanii (though we explained to her that if she stayed home sick she'd just have to stay in bed), so Andrew and I decided that we'd pull the kids out in the afternoon so they could spend some good quality time with Naanii.

The girls were rather surprised, but excited, when I checked them out. We had a picnic lunch (though Miriam had already had lunch) and then played at the Museum of Life and Science. The kids had fun showing Naanii their favourite exhibits. 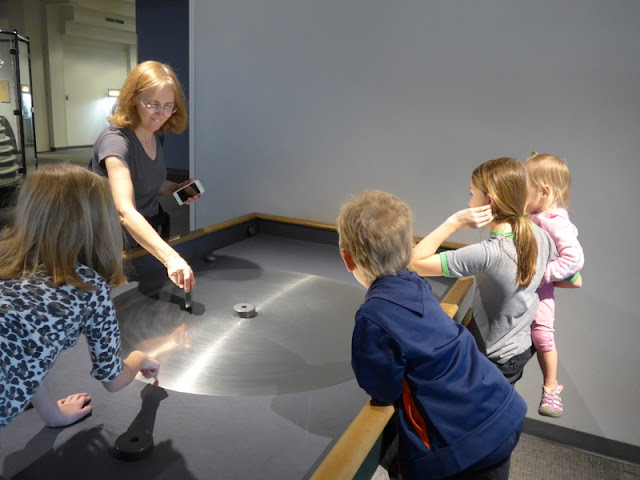 The sound garden was recently reinstalled and we enjoyed exploring all the instruments: 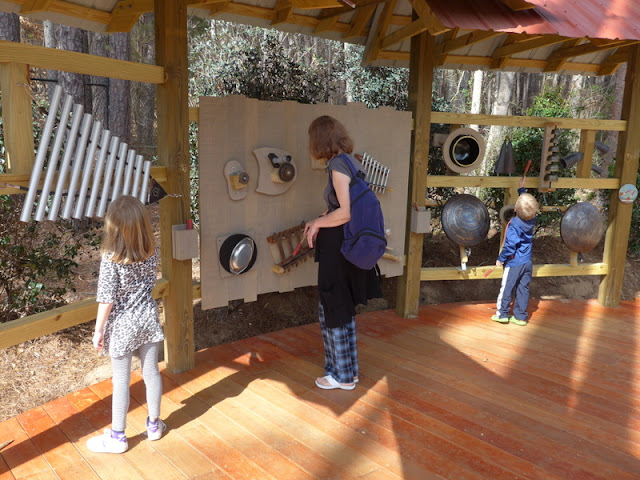 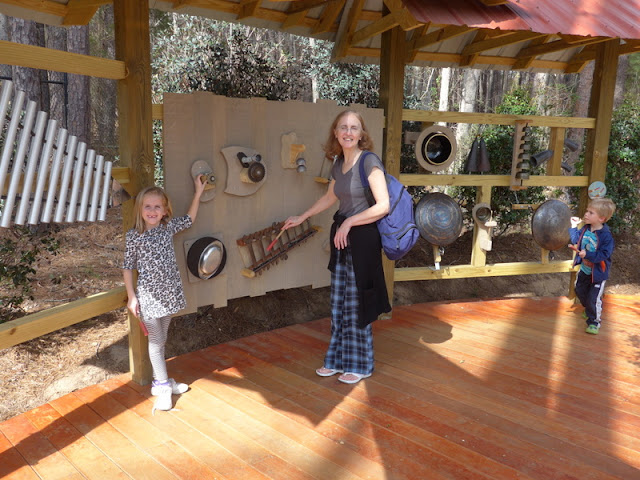 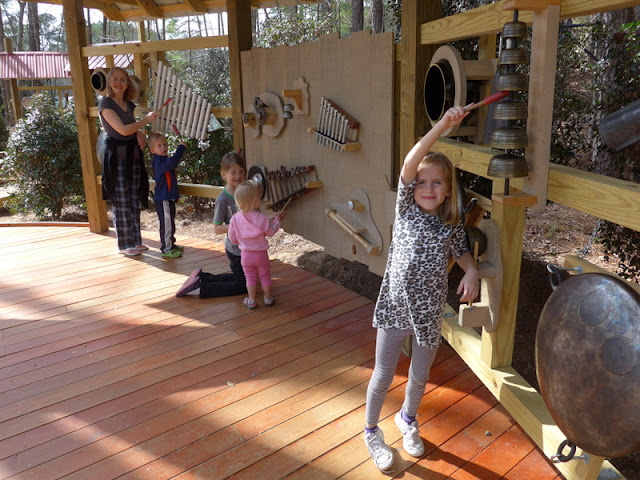 The boardwalk is closed for resurfacing so we walked all the long way around to see the bears and then walked all the long way back to the museum (usually it's a loop, which takes far less walking). One of the bears was doing some people watching, right at the fence, which was fun for everyone, I think (at least, it was fun for us). We watched the bear eat some clover. 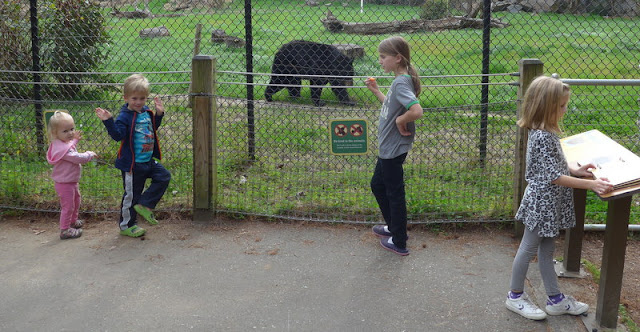 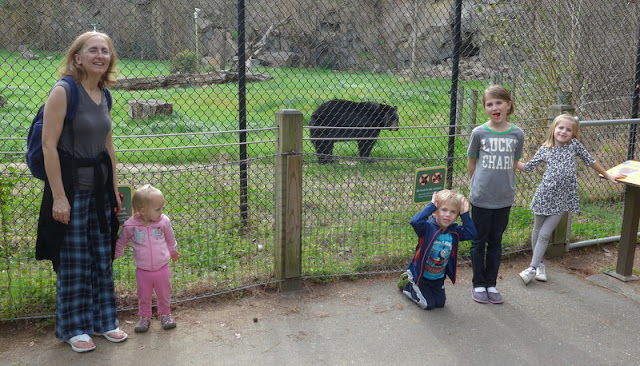 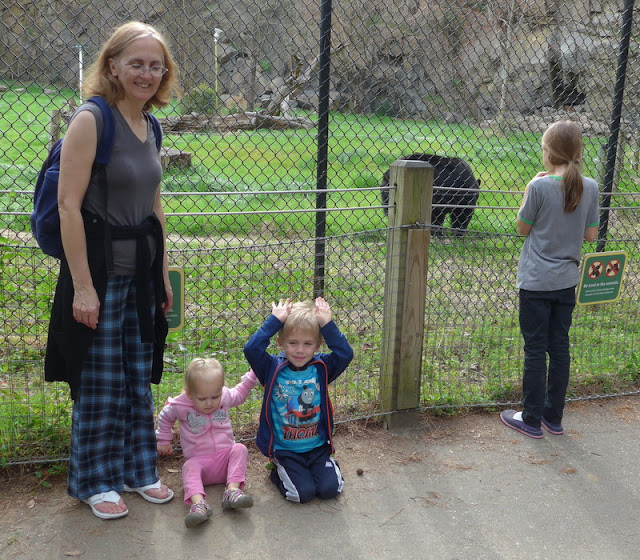 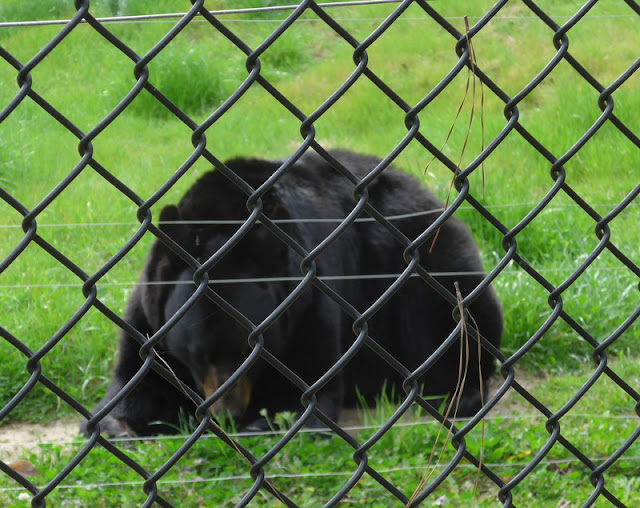 After the bears we stopped at the boats, and did the seed drop, then wandered around Into the Mist. While we were on our way to the butterfly house, Miriam wilted.

She had been so full of energy, climbing all over things, and keeping up with her siblings. Then she just crashed. 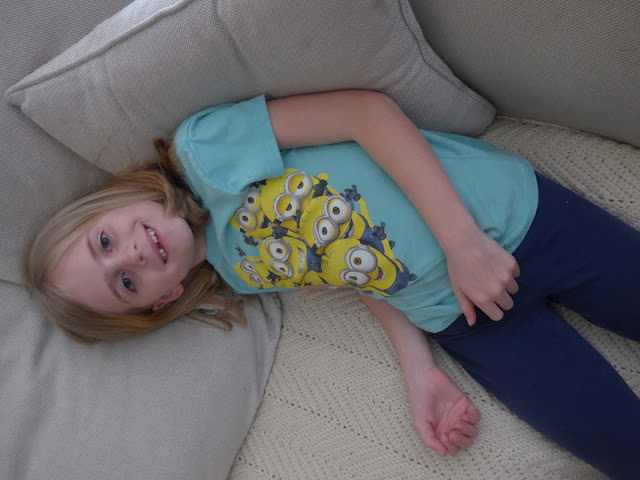 She and I sat in a bench in the butterfly house while everyone else wandered around, and then she rode in the stroller to the treehouse so her siblings could have a short romp through the canopy before going home. By the time we got home (at 5:00ish) she had a raging fever of 104.3 (Miriam has always been very talented in the fever department) and was coughing up a storm. Naanii made her a special drink of lemon and pineapple juice, which seemed to help her cough.

While I'm glad we didn't keep her home from school yesterday (she was acting fine the whole day until about 4:15) we definitely kept her home from school today and we'll be keeping her home tomorrow. I think she realized that staying home sick to spend time with Naanii wasn't all it's cracked up to be because she was quite miserable (though I believe she got some good LEGO time in). 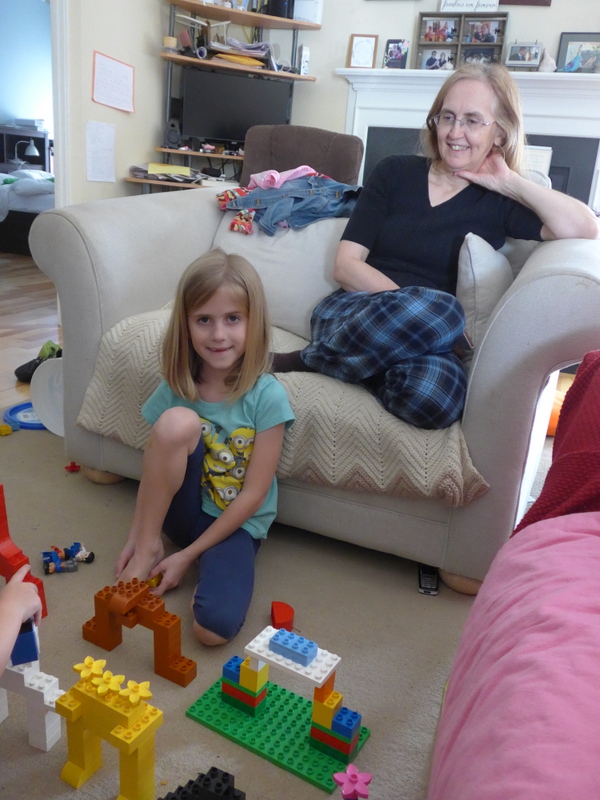 Here are the kids—minus Rachel, who was at school and said goodbye earlier this morning without paparazzi or fanfare—staying goodbye to Naanii: 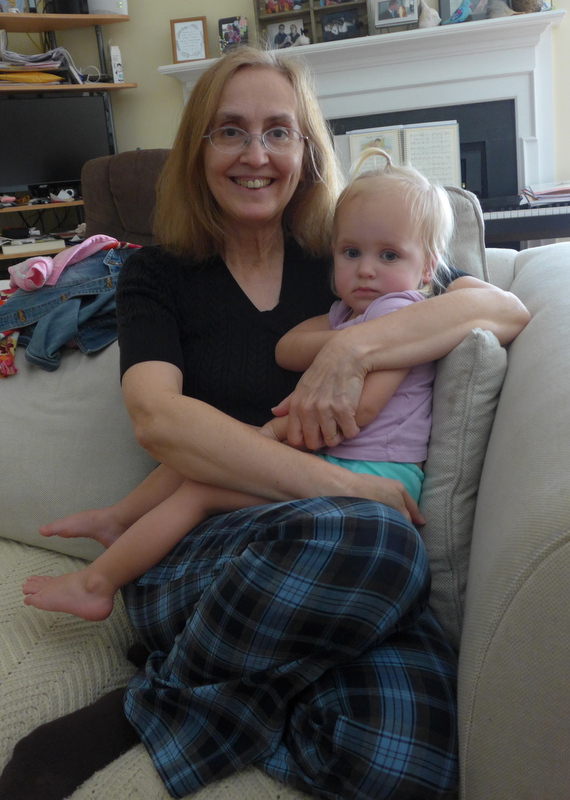 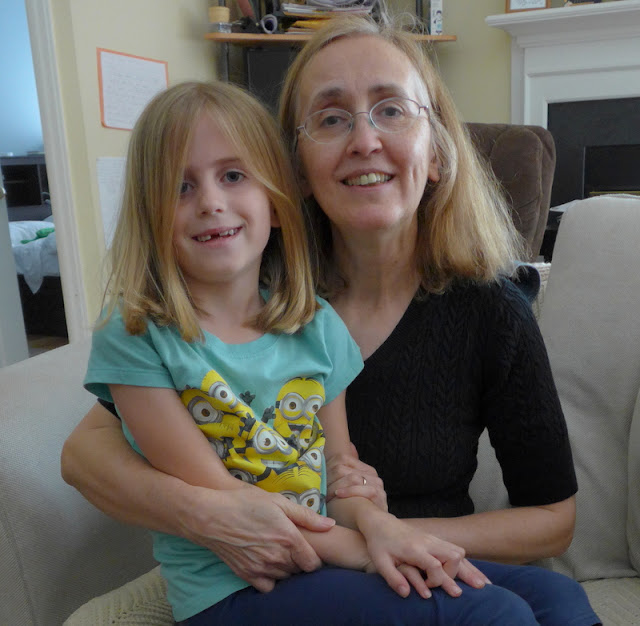 Benjamin had preschool this morning and we talked about how Naanii had to leave today.

"Well, because she has to go back to work. Besides, Bumpa's there and Josie's there and..."

"Does she want Bumpa and Josie?"

"But she doesn't want meeeeee?" he wailed.

"She wants you, too," I assured him. "But you can't have everything you want." 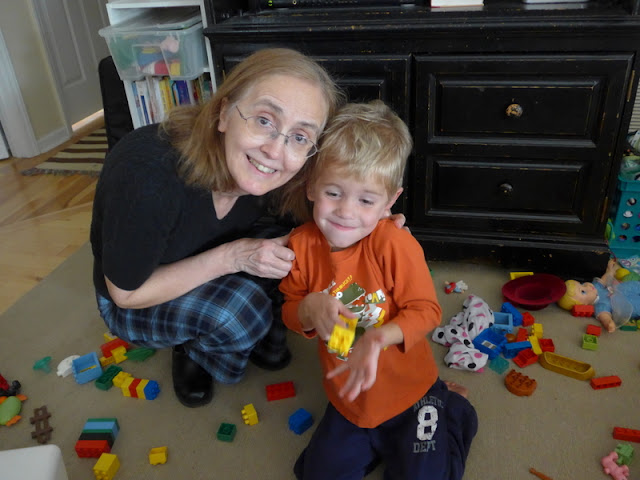 I tried to get him excited about "making plans" to visit, but he wasn't interested in entertaining that idea. He was more interested in the notion of tailing Naanii to the airport and hiding in the plane so he could follow her home (which we didn't do, obviously). Sometimes it's hard to live far away from grandparents, but it does make a visit with grandparents something to savour.

Thanks for coming, Mom!
Posted by Nancy at 5:13 PM