My children are usually a joy, but they are ten times more enjoyable when I'm not feeling completely worn out. The past several weeks were hard, full of sickness and business trips and...lice...and I've been so tired that my children haven't seemed as charming as they usually do. It was taking all my effort to just get through the day, and the next day, and the next, let alone enjoy my children.

But, no one is sick right now, Andrew really hasn't been away for a full month now (so why am I still complaining about it?), and when I went through Miriam's hair this evening I found a grand total of zero nits. Life is looking up. And, amazingly, my children have been seeming a lot more entertaining, hilarious, and enjoyable the past few days than they have the past few weeks. I have a feeling that has more to do with my outlook than it does with their behaviour.

So without further ado, here is a sequence of funny things my kids have done the past couple of days:

1) I finally have evidence that Benjamin's reading lessons are paying off. Today in the car he said, "Mom, why does the red button say 'syrup'?"

"What red button?" I asked him, completely confused.

"The one on the seatbelt," he said. 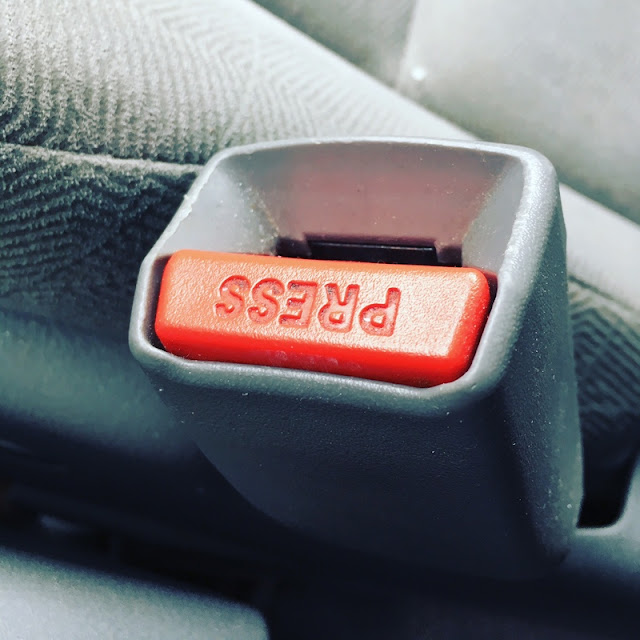 Syrup was a good try, though! It reminded me of Rachel's exclamation of "Eno way!" while we were driving and she was learning to read. We'd just passed a "one way" sign (but we do love the Eno).

2) This morning Benjamin was singing PPAP, but with applesauce instead of the real words. "I have an apple. I have some sauce. Uh! Applesauce!" And then he decided to teach Zoë how to say it so the two of them were chanting applesauce all morning while they were playing.

Soon Benjamin tired of the game and stopped yelling out "apple" and "sauce" for Zoë to echo, which Zoë found disappointing.

And then they went on and on.

Then he held up his fingers in the sign for "H," smirked at everyone, and ran back to the kitchen.

4) I made egg drop soup for dinner last night. I've only ever had it once before—at my friend Jessica McCracken's house. Her mom had a mix in the cupboard that you dumped into boiling water, and then poured scrambled egg into and stirred with a fork. She served it to us in fancy dishes. And I thought it was so cool and mysterious. And for whatever reason I thought I'd look up the recipe yesterday. Turns out it's basically chicken broth with egg stirred in. The kids seemed to enjoy it; Andrew had leftovers.

"Grandma has!" the girls chimed.

For the rest of the meal the kids kept bringing up the one time Grandma took them to a Chinese restaurant and she ordered egg drop soup for herself. Andrew and I have no real memory of this happening. Of course, we weren't there. It was when Grandma had the girls go on a sleepover to her hotel when she and Grandpa were staying in Durham for Rachel's baptism, after helping drive across the country that summer.

Anyway, I asked the kids if it should be a repeat meal or not. Miriam and Benjamin agreed that it should. Rachel sighed and said, "I dunno. I mean, I liked it...but I'm pretty sure it's something that I will sometimes like and sometimes not. Like relapsing-remitting MS, only more positive than that."

We thought this was a hilarious comparison. Rachel's really into The West Wing right now. President Bartlett has relapsing-remitting MS. And my niece Rosie was just diagnosed with RRMS not too long ago (she thought Rachel's comment was funny, too).

5) Rachel's practice log has been woefully neglected, which is evidence that her piano practicing has been suffering as well. In her defence, she was sick for several days this week and hardly left her bed. But that doesn't explain why she only had six boxes checked off in three weeks. She had been working on a class project (she had to do some illustrations for a group book report and hadn't finished them at school) and I asked her to take a short break so she could practice piano. She thought this was incredibly unfair, but I'm finding myself having to parcel out piano real estate which can be rather frustrating when everyone wants to be the one who gets to practice after dinner (yesterday I found myself wishing we'd kept our old keyboard when we got our new one...but our house is tiny and we knew someone who needed a keyboard, so...).

"Rachel," I said, interrupting her pity party. "I asked you to take a break and practice the piano for a 'little while.' You've spent most of your practice time crying."

"I wasn't crying!" she balked. "I was sulking...with tears coming out of my eyes. It's different."

Fortunately, when I started laughing about that she did, too, and then finally got a bit of practicing in.

6) This isn't funny, but it is cute. After school I asked Rachel if she wouldn't mind watching a show with Zoë so that I could take a nap. I went to book club last night so was out late. And, well, I just wanted a little nap because I'm still trying to recover from Zoë's life. She's finally sleeping a little more consistently at night but, let's be honest, it's been a draining couple of years. And Rachel wasn't a fantastic sleeper herself, so I figured it was totally fair to have her sit with the baby while I slept.

When I woke up and came out to check on them, I found this: 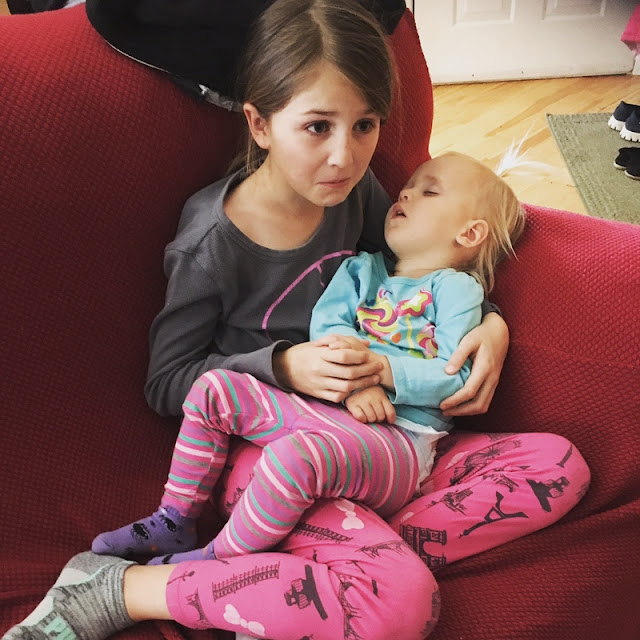 Somehow she'd managed to get Zoë to take a nap. HOW?! Inquiring minds (specifically mine) want to know.

7) This is also not funny, but it was nice. The girls brought home their report cards today and both had excellent marks. Miriam's teacher included a little note this time, which was so sweet. She said, "Miriam is a joy to have in class. She is so self-motivated and takes charge in helping me and others. She is so well-rounded. She shows progress in all areas." My girls both got wonderful teachers this year (and my girls are both pretty wonderful).*