Our pass to the museum expires at the end of this month and we haven't even gone because it's been cold and we've been sick and contaminated with lice and all sorts of good things. With our future up in the air—still!—we're not sure we want to buy an annual pass because we might be moving in the next couple of months. I seriously thought we'd know for sure by now and it's slowly killing me that we don't know. But I'm sure we will eventually know. In the meantime, I'm getting through on deep breaths.

This morning I told the kids that we could go to the museum if they would play nicely while I was in the shower. And they totally did. They played LEGO (without any screaming, as far as I could tell) and willingly got dressed (unusual for Benjamin) and when I asked if they were ready for breakfast, Benjamin said, "We already had cookies!" Then he quickly added, "But don't worry! That wasn't for breakfast. That was just for fun."

So they did a few things they weren't supposed to while I was in the shower. But overall, they were very well behaved, so off to the museum we went.

It was packed. There was a sign up in the main parking lot saying "This Lot Full" so I turned to go into the overflow parking lot, which an attendant informed me was also full. There were probably 10–15 school busses in the lot (in addition to cars). "You're welcome to park elsewhere and walk to the museum. A lot of people are having luck parking in neighbourhoods. Just make sure not to park in front of driveways or mailboxes," the attendant told me.

Honestly, if the parking lot is that full I don't want to go to the museum anyway (which is why I'm torn about the parking garage they're planning on building (it'll just make it harder to gauge whether or not the museum is overpopulated or not)). Instead we went to the nearby—very empty—playground, had a picnic, and walked the Bronto Trail. It was an enjoyable (and uncrowded) couple of hours. 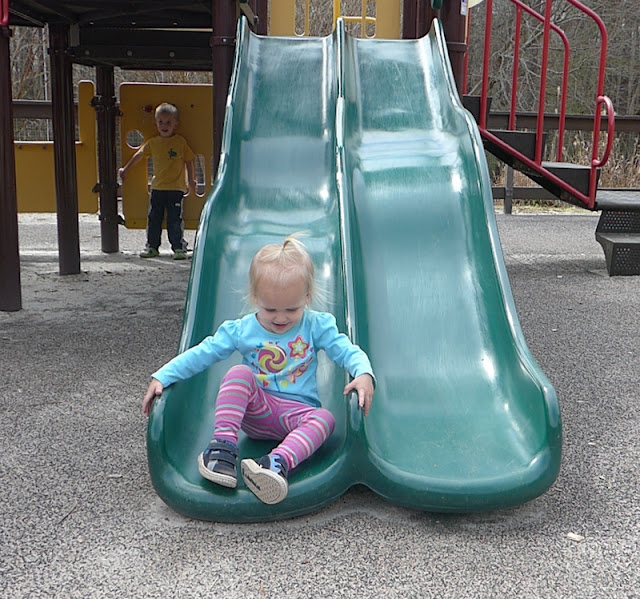 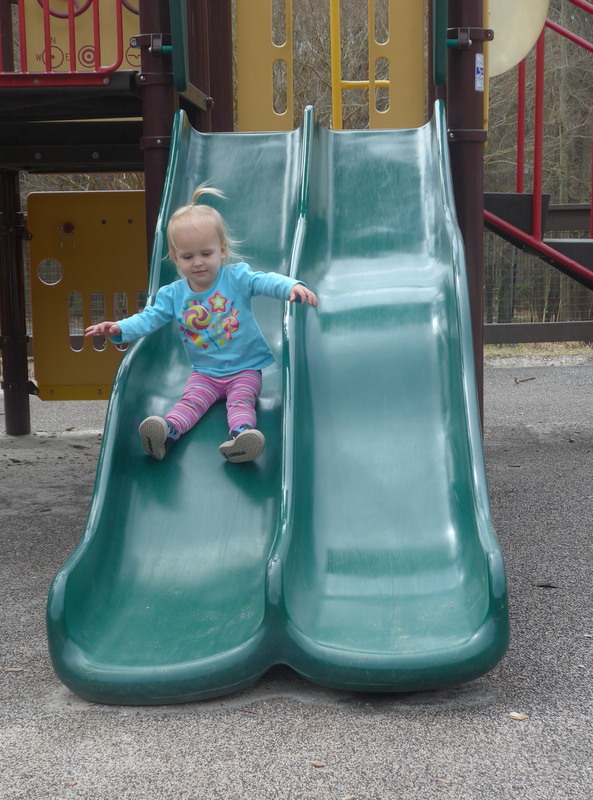 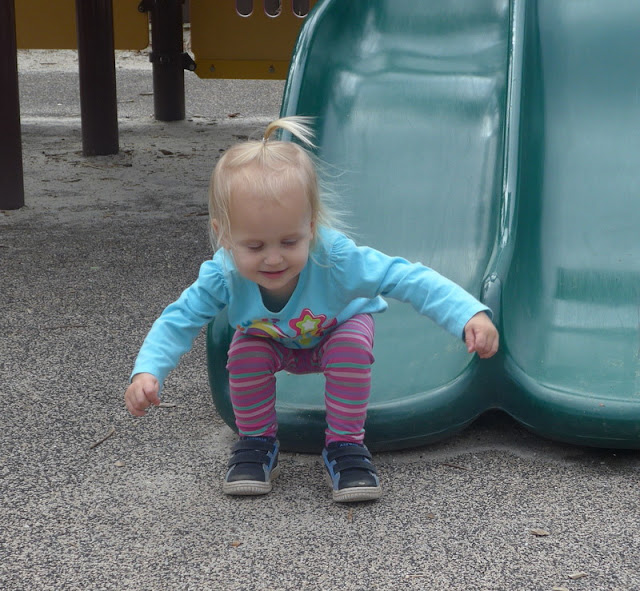 Benjamin mostly ran around avoiding me (so there aren't many pictures of him). The only time he let me catch up to him was when he wanted me to push him on the swing. He's otherwise pretty self-sufficient on the playground (and truthfully could probably learn to pump if he wasn't so good at convincing people to push him). Zoë on the other hand needs a little more hovering. Here she is climbing a ladder to nowhere (technically monkey bars, but those were way out of reach): 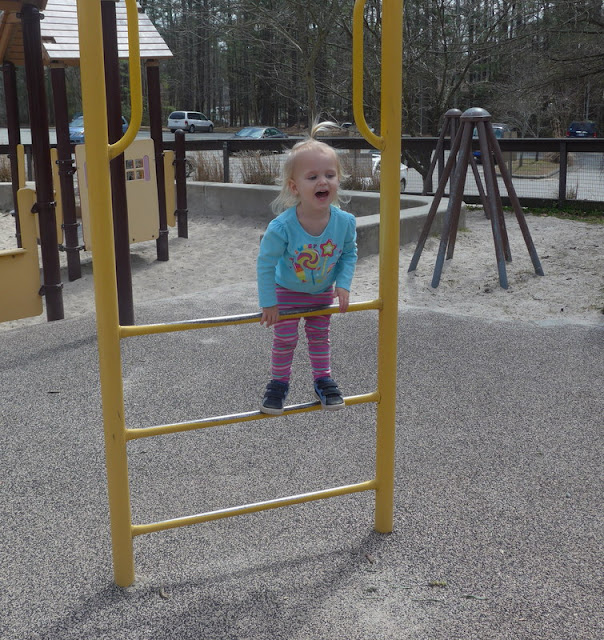 Zoë was the first one to spot the brontosaurus today. She was quite excited and hopped out of the stroller to go see it (and very nearly climbed through a Zoë-sized gap in the fence). 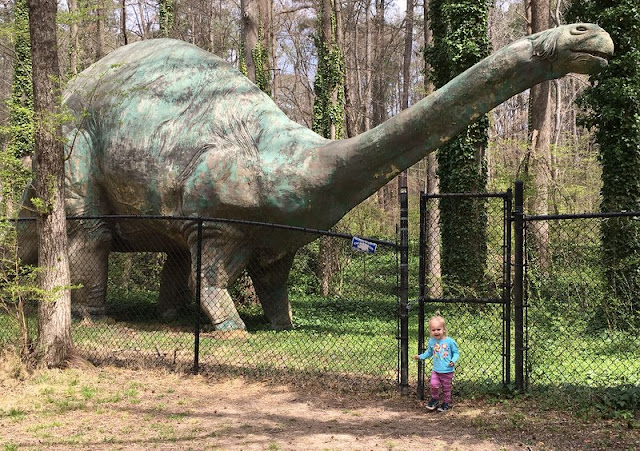 It took a little convincing to get Benjamin to go close to it for whatever reason (he wanted to "stay on the path, Mom!" which is usually good advice, but this is a city park and the trail runs through grass (that clearly every body walks on)). Here he is giving a mighty roar: Benjamin and Zoë, of course, had to pick up every stick, rock, pinecone, and flower they came across. Zoë started roaring when Benjamin asked if the yellow flowers are dandelions (I don't know why he asked that because I'm pretty sure he knows). When I asked her what she was holding she said, "Fowfor." And when I asked her what colour it is she said, "Lello." 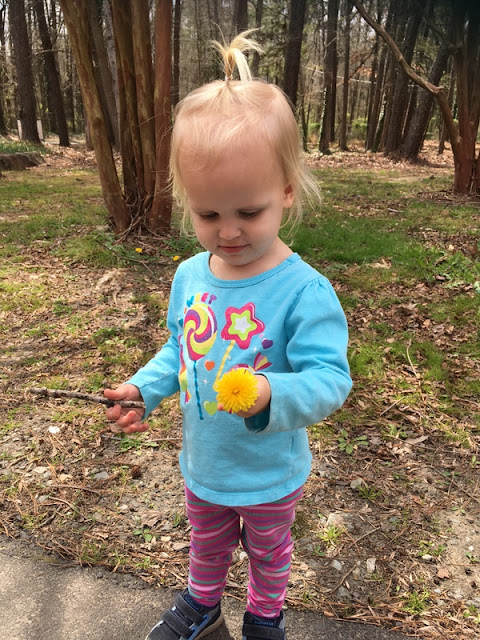 I know I've watched children go through this stage several times now, but it still blows my mind how quickly kids start acquiring vocabulary.
Posted by Nancy at 10:47 PM