Music and Bugs and Teeth

The annual second-grade sound parade is this Friday, which means we've been busily brainstorming ideas for musical instruments. Since we're basically veterans at our school, we knew it was coming up for Miriam (we were completely blind-sided when it was Rachel's turn (she made a ukulele...that I can't find any pictures of)) and months ago Andrew brought home some Italian soda in glass bottles. We collected them as we finished them and thought it would be fun to make a flute of sorts, but Miriam couldn't figure out how to blow across the top well enough to produce a sound.

I completely sympathized because I've never been able to do it either...until this year. I made Andrew teach me how one night after we got the kids in bed. I'm basically a pro now.

But it was just too tricky for Miriam at this stage in her life, so when we finished off a tin of potato pearls we decided she could make a drum instead. Here's our finished product: 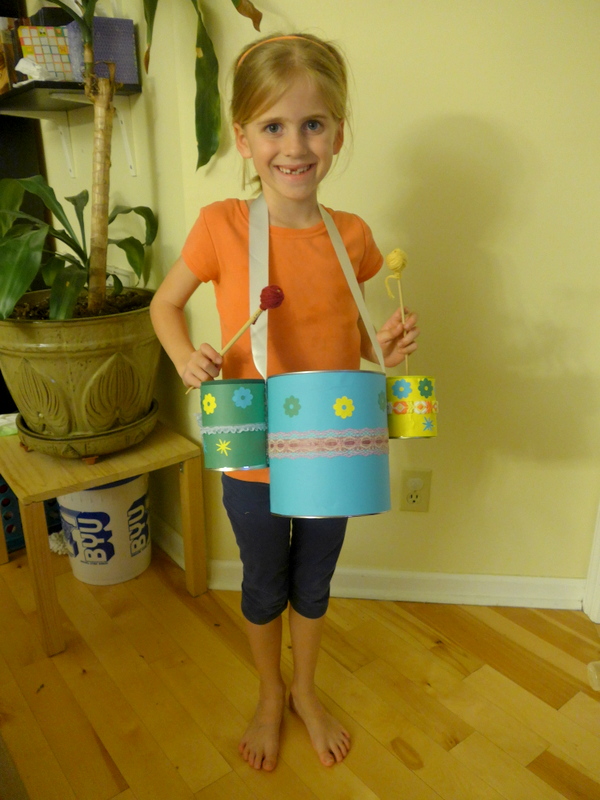 She's got three different sized cans for three different sounds. The smaller cans have balloons stretched over them. We couldn't get a balloon to stretch over the biggest can so she's just banging on the metal bottom.

Her mallets are made of chopsticks and yarn (most of our chopsticks were plain "tossable" ones, but we've been reusing them; now that we have fancier ones from Amanda we decided we could part with an old pair).

She's pretty excited about the parade.

We sent Miriam to school on Monday, nits and all (but mostly no nits). After Andrew had spent two hours picking through her hair on Sunday, I came home from church and picked through her hair some more. We were quite confident that we had gotten most of the nits. Still, I sent a note with her explaining all about her tenants and, as per district policy, a letter had to be sent home with all of her classmates. It was anonymous, of course—no fingers were pointed at Miriam—but it did cause quite an uproar in the classroom. The children were all chattering to each other, wondering who it was who had "bugs crawling all over their head," and so forth.

Finally Miriam had had enough. She stood up and said, "Guys! It was one bug! One. That's all. They weren't crawling all over my head!" That shut everyone up pretty fast.

Her teacher thought this was so charming that she's been telling the story to anyone who will listen. 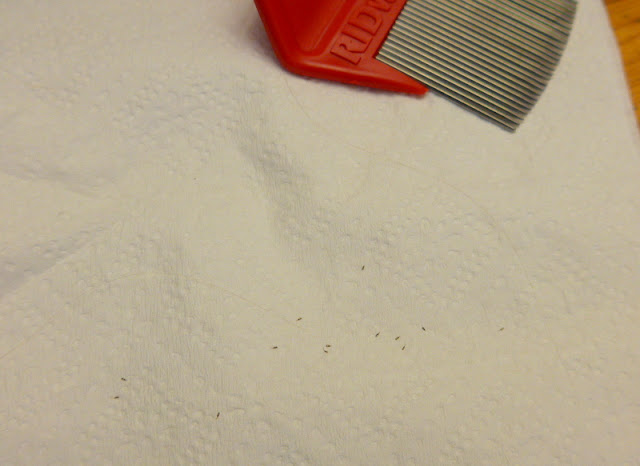 I didn't have a chance to go through her hair today because the kids had dentist appointments this afternoon. Andrew took them all (thank goodness) so that I wouldn't have to sit in the lobby for hours with Zoë, who was a complete beast of a child today.

She woke up this morning screaming and screamed for forty-five minutes straight. I have no idea why. And that really just set the tone for our day.

Anyway, Benjamin and Rachel were cavity-free, which they were excited about. Miriam has two little cavities (on what teeth, I'd like to know! She has like ten left in her mouth), which she's terribly upset about because the dentist explained that she needs to brush for "at least two minutes" to remove all the "cavity bugs" from her teeth and she's just feeling a little put-upon by bugs lately.

She was also diagnosed with "absent" mandibular primary canines, which was also upsetting for her. They haven't grown in yet, even though she lost them quite a while ago...and they aren't showing up in her x-rays either.

So while the majority of our children may be clones of Andrew, at least I know my genes are doing something! While I have managed to grow all of my teeth (thank you very much) having "absent" teeth is certainly something that runs on my side of the family (you're welcome). My little sister had a tight-lipped smile for years until she got braces and implants, and now she has a spectacular smile.

It's nothing a good orthodontist can't fix.

Rachel finally went to school today (she was home sick on Monday and Tuesday).

Benjamin pooped in the tub today (he pooped in the toilet first but then "it was so weird but [he] felt something come out of [his] bum in the tub; [he doesn't] think it's poop but it's all brown and floating all around, so...").

Seriously, this is why I get nothing done.

When Rachel was home, observing me all day, she remarked, "So, this is what you do all day? You've done so much...but not really anything...I don't understand."

Yes, that is life in a nutshell. I clean the living room. The kids mess it up again. I stop the kids from doing this. I stop the kids from doing that. I engage the kids in this activity. I fight with them about that activity. I feed the kids. I clean up this spill. I clean up that spill. I half-way clean off the table. I get distracted by the kids. And all of a sudden it's time for the older kids to come home from school and I've accomplished nothing...but have been running around putting out little fires all day long.
Posted by Nancy at 9:40 PM