In sickness and in health

We watched the live-action Cinderella while Miriam was home from school last week and Benjamin decided that he was "Kit," the "apprentice" to the king (ie: the prince). He created several costumes throughout the day and built a sword and ran around the house like a crazy monkey knight in shining armour. 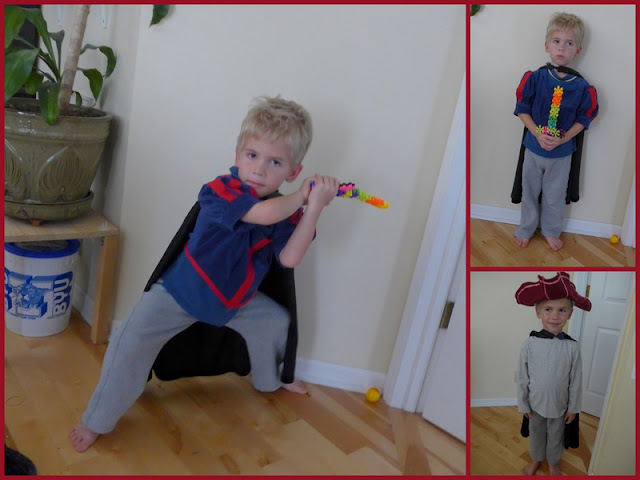 His behaviour after watching this movie almost rivalled his behaviour after watching Spiderman. We had the hardest time getting him to bed—he kept climbing on everything and swinging around corners. He even sneaked out of bed stealthily carrying his "spiderweb blanket" behind his back and when I asked him what he was doing out of bed he flung it out me, yelling, "Go, web, go!"

(I can't find the post I'm sure I wrote about finishing his baby blanket (in 2015...when he was almost three years old...it's fine) but he took one look at it and declared that it was a "spiderweb" and hasn't gone back on that opinion since, apparently).

Today was a bit of a lethargic day for Benjamin. He's come down with whatever Miriam had and, much to my surprise, spent most of the day lounging about the house. Everywhere he went he kept lying down to rest. When we went outside to play he spent a good chunk of his time curled up on the foam sled, soaking in the sunshine (not playing).

He helped our neighbour wash her car for a while, before curling up on the electric box to watch instead.

"He's sick," I said. "He's been running a fever and has been really tired all day."

She felt his forehead and agreed he was a little warm and said to let her know if we need anything (she's a pediatric nurse). She then said that she just got back from vacation in Florida and that she missed my kids so much.

"There were no kids in Florida!" she lamented, which was hard for her because she's used to working with kids at work...and having Benjamin bombard her for attention at home (he loves doing whatever she's doing: walking the dogs, hauling wood, washing the car, working in the garden)). "It's good to be back."

While Benjamin was clearly suffering, Zoë was turning somersaults on the lawn.

"She's sick, too," I sighed. "Her temperature is about as high as Benjamin's and she has the same cough so you'd think she'd want to sit still and cuddle..."

"I had one like that," my neighbour said. "Once when I really wanted him to rest I told him that he wasn't allowed to put his feet on the floor. He ended up turning it into a game, crawling from one piece of furniture to the other, so I gave up."

That's often how Benjamin used to behave when he was sick. Perhaps this is a sign he's growing up.

Now it's Zoë who's like, "I'm sick...but I found this permanent marker and drew on my dress and the carpet. And I dumped half a box of cereal on the floor. And I turned a somersault into the TV stand. And I want this package of fruit snacks. And I emptied the box of toys all over the living room. And I put toothpaste on this (not my) toothbrush all by myself. And I pushed the stroller down the front steps. And I fell down the steps trying to carry this booster seat down. And I chased the neighbour's yappy dog around the yard. And I climbed into the top bunk. And I unloaded the dishwasher to random kitchen cabinets. And I..."

I seriously couldn't keep on top of her today! Between filling all of Benjamin's sickbed requests and keeping Zoë out of trouble I was about run off my feet (while simultaneously getting nothing of real merit done around the house).

Here she is getting down her little set of scriptures from the shelf: 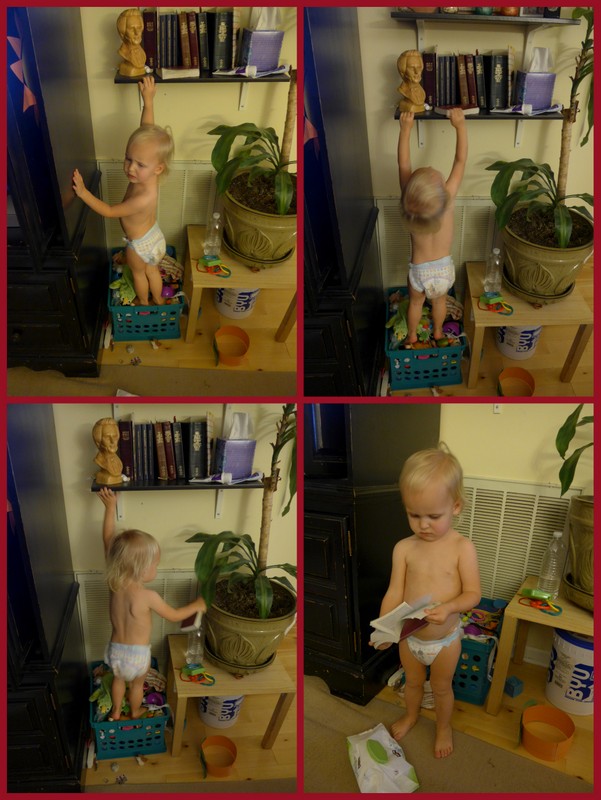 We actually didn't read scriptures today (which is always disappointing for Zoë because reading scriptures as a family getting down the scriptures is one of Zoë's favourite things to do). Instead we worked on memorizing a new scripture together because by the time we'd finished FHE Benjamin was just about passed out on the couch, poor thing! We had to get him into bed stat.

Hopefully soon everyone will be healthy around here.
Posted by Nancy at 12:04 AM