This morning I gave Zoë the choice of wearing a diaper or wearing underwear. Knowing that underwear means she's required to sit on the potty—something she's a little too impatient/stubborn for—she confidently selected a diaper. So I put a diaper on her and then helped her into her pants.

A little while later she walked up to me all smug and announced, "Un-nuur."

She'd managed to (mostly) pull a pair of underwear on over her pants. She insisted on wearing them all day long. Here she is proudly showing them off: 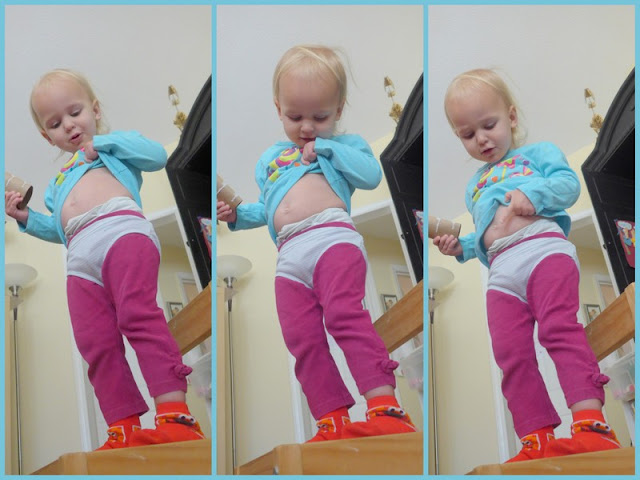 I told her that since she was wearing underwear she still had to tell me when she needed to go. For the most part she managed to do this right after she'd gone. "Oh, pee!" or (after hiding behind the couch) "Oh, poop!"

She's working on weaning herself as well, which is kind of making me sad...but—let's be honest—also kind of not. I've spent the past several weeks convincing her that she doesn't need to nurse at night anymore. She's nearly 22 months so even though she acted like she was dying at first I decided to stick to my guns. We went through several middle-of-the-night tantrums and endured lots of screaming from her, but she knows now to not even ask to nurse when she inevitably climbs into our bed.

I suppose I should nearly inevitably because for the first time ever she was still asleep in her bed yesterday when Rachel got up for school. We'll ignore the fact that she screamed and cried and carried on from around 11:00 until nearly 2:00 in the morning (for who knows what reason). We tried bringing her in bed with us but she wouldn't settle down. We changed her pyjamas. We changed her diaper. We gave her a drink of water. We sang songs. We tucked her in with her special dolly and Elmo. We turned on music. We turned off music. We threatened. We pleaded. We took turns sitting with her. We patted her back. We stroked her face. We left her all on her own.

Eventually she stopped screaming and fell asleep in her own bed while I was taking a turn with her.

You'd think that the fourth child wouldn't be very stubborn, right? Like, they should be used to being ignored a bit, comfortable with self-soothing, familiar with waiting for attention, able to handle all the teasing their older siblings can dish out. Right?!

Zoë is, oh, so very willful.

She was born dissatisfied.

She will never be satisfied.

She is not afraid to scream it to the rooftops, either. There has been so much screaming in our house the past (nearly) two years. So. Much. Screaming.

Anyway, after finally deciding that her dense parents were never going to understand what "WAAAAAAAAAAAAH! WAAAAAAH! WAAAAAAAH!" means (use your words, baby girl) she curled up with her knees under her tummy, her little bummy sticking up in the air, and dejectedly sniffed herself to sleep.

And then miraculously stayed in her bed until around 7:30 in the morning (a good 15 minutes after big sisters left for school).

Rachel woke up at 6:00 she quickly snoozed her alarm and then slumped back into her pillow for a few more minutes when she was startled by the sound of someone shifting in their bed. She was quite confused.

"Did I just turn over?" she wondered to herself (in her groggy state she wasn't quite sure), but then she peeked over the side of her bed and noticed that Zoë was still in her little bed.

For real. That's the first time ever that Zoë has still been asleep in her own bed when Rachel's gotten up for school (or for any reason). She was so out of sorts when she woke up (it was probably disorienting to be in her own bed) that when she came to find me she didn't even ask to nurse. She asked for cereal!

That's also a first—not the asking for cereal part (she can always go for a bowl of cereal) but the not asking to nurse first thing in the morning part. I was like, "Are you sure you don't want to nurse?"

So she had cereal and then didn't nurse until bedtime.

All of a sudden this weaning thing is looking pretty serious. She's been such a devoted (read: demanding) nurser that I was sure she'd make it to two years, easily. I'm not so sure about that anymore. I guess 22 months is pretty close to two years, but I'm still sad to let this relationship go...
Posted by Nancy at 11:46 PM