A thunderstorm and a black eye

When we were deciding where and how to take the kids camping over spring break, I remembered that a few cabins had recently been built at Carolina Beach State Park. Some friends of ours had stayed in them last summer and said they were great—air conditioning, electricity, real beds, and really not that much more expensive than booking a tent site.

Camping with small children in tow can be...taxing...so we decided to give the cabins a try and I'm so glad we did! It has be pouring for hours and hours now—thundering and lightning(ing), too—and though our tent is decent I'm not sure how it would have held up (or how we would have held up inside it).

We knew a storm was coming—we had seen it rolling in while we were out hiking—but we didn't expect it to be quite this stormy! It sprinkled a bit while we were doing dinner and s'mores, but had mostly stopped when the kids and I trekked up to the bathhouse to brush our teeth.

That's one of the downsides of staying in the cabin. You can't choose a cabin close to the bathhouse because they're all equally far from the bathhouse. The last time we camped here we stayed in a tent right next to the water spigot and the path leading up to the bathhouse, which was very convenient.
The walk to the bathhouse from the cabins isn't terrible, but it takes a few minutes—350 steps or so, depending on how far your little legs can carry you (so approximately a 3.5 minute walk, according to this chart).

It was getting rather dark and we'd just had to chase off a racoon, so the kids were skittish already. It was difficult to walk to the bathhouse with them all clinging to me, while I was trying to aim the flashlight so we wouldn't trip on any roots or what have you. 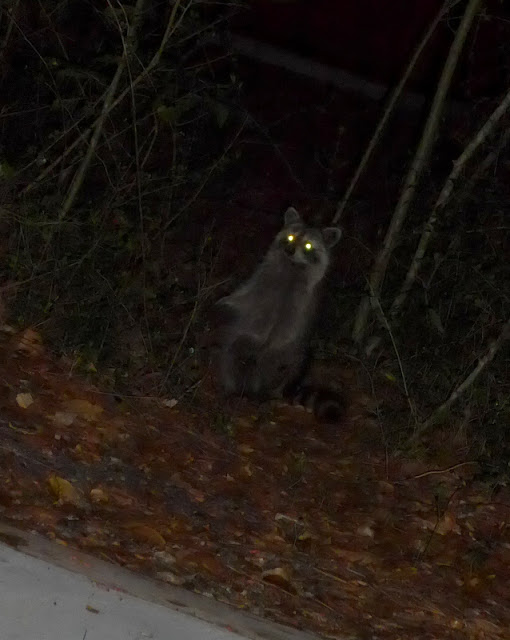 Zoë had miraculously fallen asleep while we were roasting marshmallows. 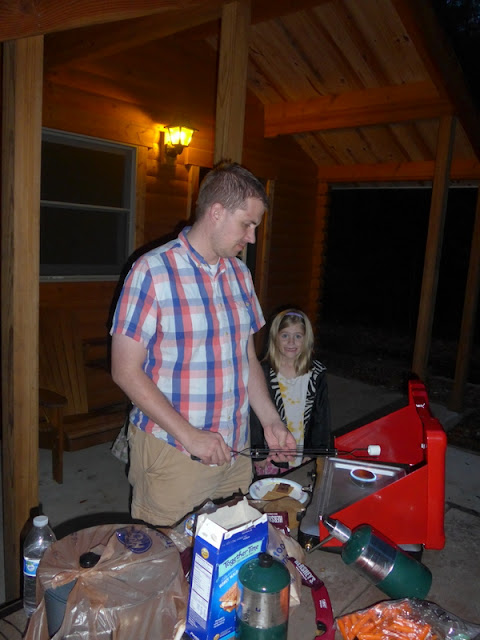 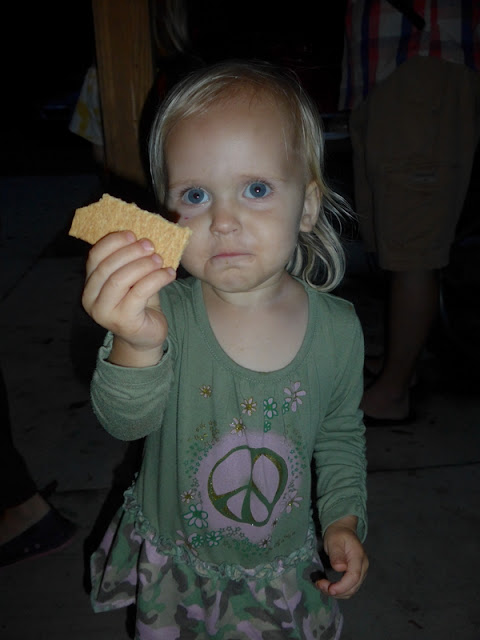 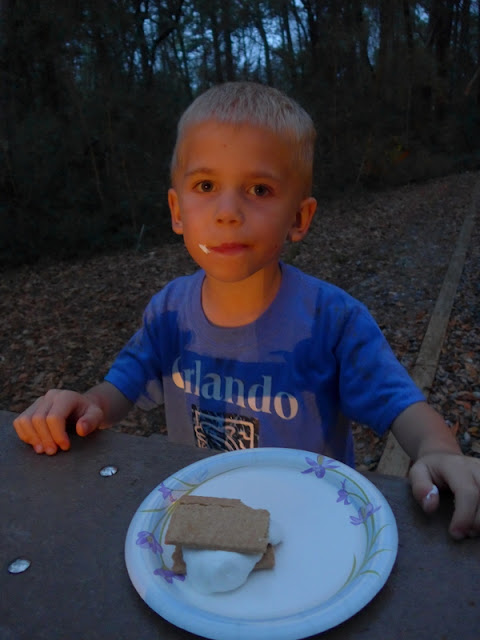 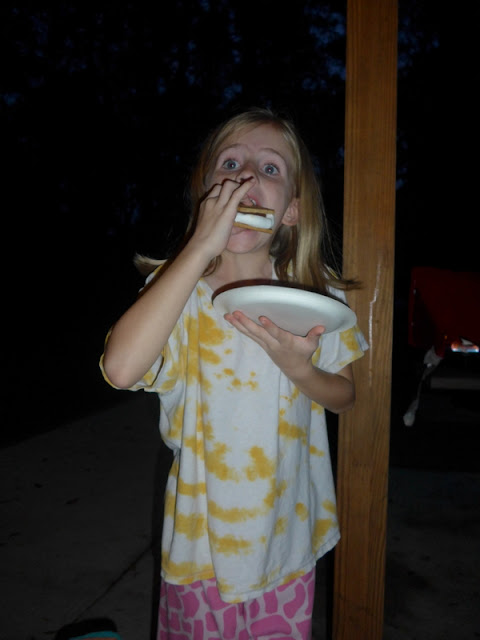 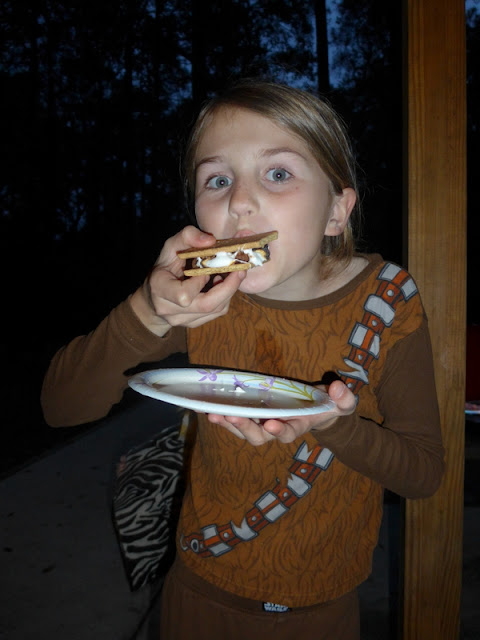 A clap of thunder startled her and she scrambled onto my lap and I sang and rocked her until she succumbed (and she has a new word: nuner, which means thunder (which she doesn't like at all)). I was thanking my lucky stars I wasn't also having to contend with her on our long, dark walk to the bathhouse (Andrew stayed behind with her). We made it to the bathhouse and the kids got to work brushing their teeth and using the toilets. We finished up, pushed open the bathhouse door and were met by a curtain of rain and a pitch-dark sky.

"What do we do?" the children asked.

"Run, I guess," I said, mentally doing the math on how I could hold everyone's hands and the flashlight in order to guide/drag my children through the storm.

But just then a brilliant flash of lightning lit up the entire campground. The children screamed in unison and dove back into the bathhouse. We sat and observed the storm for a few minutes. We were right in the thick of something big—thunder was rolling, lightning was flashing, rain was coming down in buckets. 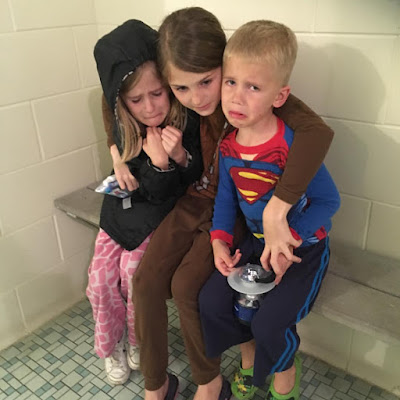 "We can wait it out," I suggested to the sobbing huddle of people on the bench, but I texted Andrew...just in case...leaving Rachel to comfort her sad little siblings.

There was no way we were going to wait it out in the bathroom until 11:00 at night.

"And there's lightning," I said.

"And the children are all crying," I added.

"Or I can lock the sleeping baby in the cabin and drive down to pick you guys up..." he wrote.

The kids were rather relieved when we only had to make a mad dash down the bathhouse path in the dark, stormy night, to meet Andrew at the road. And although I wasn't crazy about leaving the baby alone in the cabin...I also wasn't crazy about dragging my three other babies out into a wild thunder storm (lightning is no joke, folks). Plus, a 3-minute walk is an even shorter drive.

"I had no idea the storm was this bad!" he said when we hopped in. "I heard rolling thunder but I couldn't see all the lightning!" (We'd already pulled the curtains in the cabin).

We made it safely back to the cabin, where Zoë was still peacefully sleeping (though she's been up twice since then (because Zoë)), and did our best to get the kids settled but this storm was a rather wild one.

The heavy rain was accentuated by the tin roof, I'm sure, and the howlings of the wind were multiplied as it whipped angrily through the trees towering all around us, so what was already an impressive storm felt even more imposing in our unfamiliar environment.

Poor Benjamin was particularly upset by the storm and I tried to comfort him by reminding him that we were safe and warm in our cozy little cabin, that the storm would eventually end, and everything would be fine.

"I know," he sniffed. "I'm just worried about all the people in tents!"

I'd been so full of gratitude for our own fortuitous condition that although I'd thought, "I'm sure glad we have this cabin!" I'd completely neglected to think of the plight of others until Benjamin reminded me to do so.

I sang him a song and helped him with his bedtime prayers—and he remembered to pray for all the people in tents (who surely are having a worse (and likely wetter) night than we'd had).

We were in the middle of preparing dinner when all of a sudden Andrew yelled at Benjamin, scooped up a screaming Zoë, plopped her in my arms and hauled Benjamin inside the cabin for a "looooong" time-out. 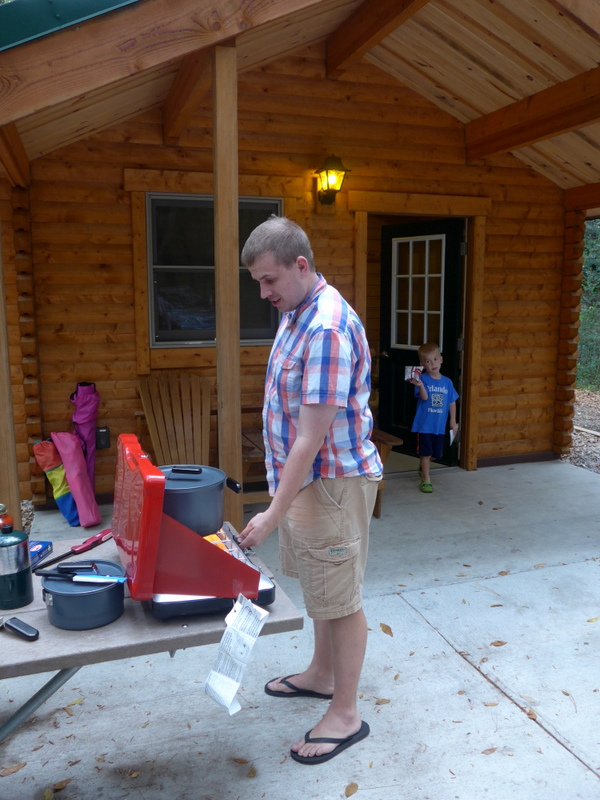 I cuddled Zoë on my shoulder until Andrew stormed back out of the cabin.

"What happened?" I asked.

"She was going to throw one at me first," Benjamin piped up. How he had the nerve to get out of time out on his own, I'll never know.

"Get back inside!" Andrew commanded. He exhaled with a rumbling growl. "Yes, Zoë was holding some pebbles from the parking spot, but Benjamin picked up a rock and threw it right at her face." 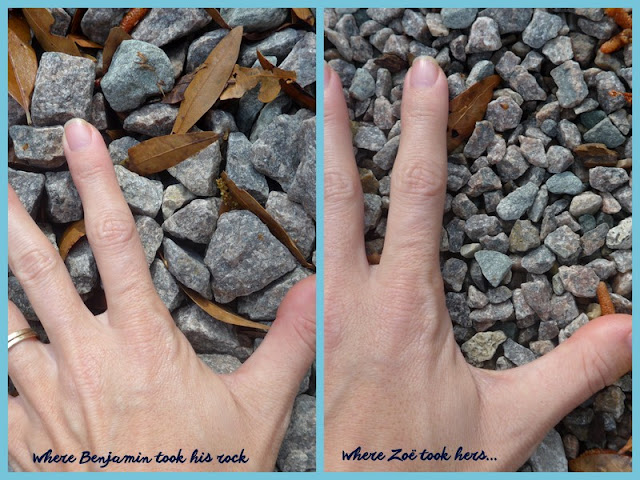 I took her off my shoulder to check her for injuries. Sure enough, Benjamin had hit his target. She had a lovely mark on her cheek, just under her eye, where Benjamin had pegged her with a rock...just to the side of the scar left behind when he hit her with the spray gun last year (just in time for her 1st birthday pictures). 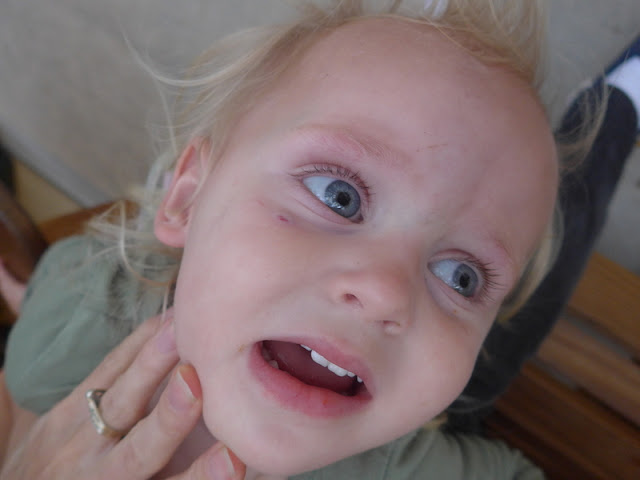 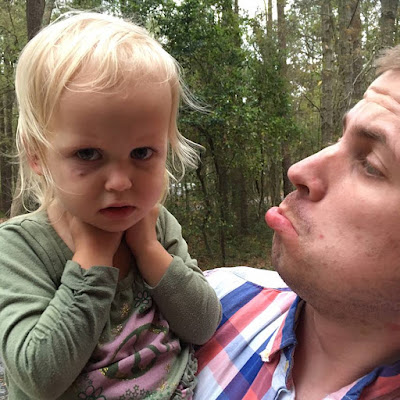 After calming down Zoë I went into the cabin to talk with Benjamin. 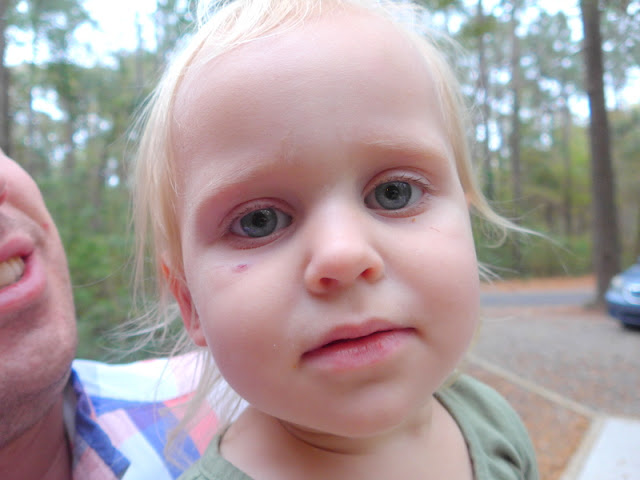 I gave him some books to paw through to make his sentence more palatable and by the time dinner was ready (really just a few minutes later) everyone was in much higher spirits, including both Benjamin and Zoë. 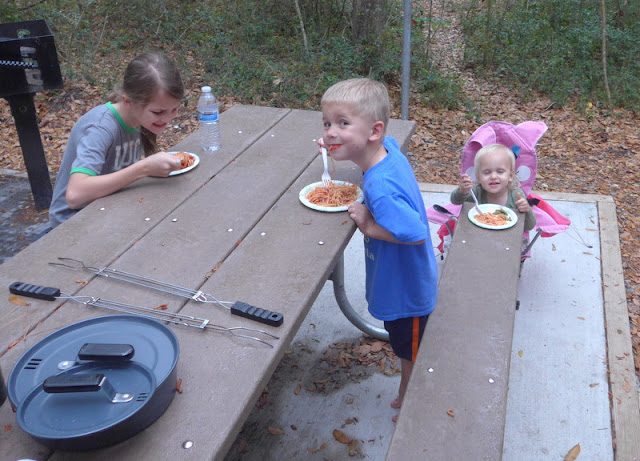